A rapidly urbanizing world means that people are less likely to live near fields or woods, and an increase in scheduled activities means less time to wander through vacant lots. Thus “managed” encounters with nature, like visits to zoos and aquariums, provide an increasingly important opportunity for contact with other species. Indeed, the fact that zoos and aquariums (hereafter referred to simply as zoos) are so popular, attracting millions of visitors a year, indicates our continued interest in wild animals and their habitats.

Though zoos were originally created mostly to satisfy people’s curiosity about the exotic—and perhaps to demonstrate the status of the person or institution that created the zoo—in the modern era, zoos have a serious mission as conservation organizations. Many of them have on-site programs to protect species in the wild as well as breeding programs to maintain healthy captive populations. Many zoos also consider conservation education to be an important part of their mission, and hope to encourage positive attitudes toward biodiversity conservation among their visitors.

Traditionally, education has been conceived as simply a matter of conveying information. Zoos are no exception in this approach, hence the often-boring and underutilized signs attached to exhibits,  describing an animal’s habitat and lifestyle in the wild as well as whether or not their species is endangered. But conveying information is actually one of the least important things zoos can do. After all, information is easily available in classrooms and on the internet. What zoos can, distinctively, provide is the direct experience of nonhuman animals. Such experiences have two psychologically important characteristics: they are vivid and emotionally rich, and they are typically shared with others.

Psychological research has shown that vivid, emotional experiences not only attract more attention, they are also better remembered. The scary, funny, or awe-inspiring animal exhibits at the zoo encourage people to pay more attention to information about the animals (including information about their conservation status) than they would pay to a written description. The multisensory, unscripted nature of the encounter provides experiences that a video can’t. People remember when the animal did something unexpected, like catching a squirrel or playing with a stick. In addition to sights and sounds, even the smells (though possibly unpleasant) add to the multisensory richness of the experience.

The vast majority of zoo visitors attend in social groups, with family members or on school field trips. Social interactions are thus a key part of the zoo visit. And when people are looking at the animals, there seems to be almost an automatic tendency to share the experience with others. In my research at zoos, I found that almost nine out of ten visitors would share their observations of an animal by pointing it out to their companions, or simply by saying “look!” Our first impulse when we see an animal is often to make sure that someone else is also watching.

Social interactions like these are opportunities to create and communicate shared values. Indeed, some parents say they deliberately use the zoo visit to talk to their children about the value of nature and the importance of caring for wild animals. Even parents and teachers who are less deliberate about the moral lessons are communicating an important message: that animals have value, that they are interesting, and that they are worth our time and regard. Every parent who stands in front of an animal exhibit and says “Isn’t he beautiful!” or “The mommy is looking after her baby,” or even “Look at that!” is giving their child a reason to care about the animal. 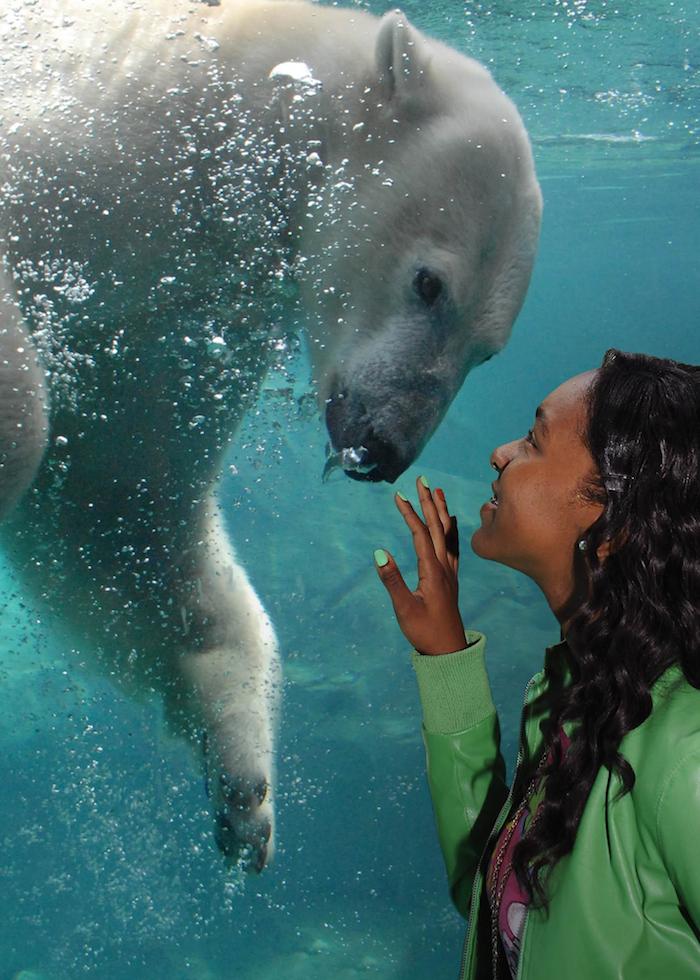 Not all interactions will be equally effective in creating caring. People can, and do, look at the animals in objectifying ways, making fun of their appearance or even insulting them. (One of my research assistants once came to me, upset, when she overheard some visitors say “Hey, fatty ugly Polar Bear!”) There is evidence that exhibit design can encourage a more or a less respectful attitude toward the animal. An old-fashioned exhibit in which the animal is behind bars, perhaps in a concrete cage, and the visitor may be looking down on the animal may lead people to take a less sympathetic, more objectifying perspective. After all, the implicit message of such an exhibit is that it is acceptable to take an animal out of its natural habitat and put it in an uncomfortable environment merely for humans to observe.

An exhibit that shows respect and concern for the animal may encourage the visitors to feel a similar level of concern. Evidence that the zoo has spent time considering the animals’ needs, not just for food but for intellectual stimulation and social interactions (where relevant), reminds the visitor that animals have such needs: that they are thinking entities with their own experiences and not just objects for human entertainment.

Beyond demonstrating respect, the ideal zoo exhibit would encourage something we could call empathy or connection. Many exhibits do this already by calling the visitors’ attention to the things they have in common with the animals on display. Exhibit signs remind people that the animals play, sleep, and have families; they inform us of interesting facts like “gorillas have fingerprints too” or “wolves mate for life.” These signs encourage us to take the perspective, in some brief and limited way, of the animal on display. We recognize some similarity or shared experience, even if it’s only the experience of being hungry and then having that hunger satisfied.

Our perceptions of similarity matter. In general, similarity to other people is associated with increased empathy and willingness to help. Likewise, people have more regard for animals with whom they feel a degree of similarity. People who anthropomorphize animals show more concern about them.

Zoos can foster a culture of conservation; in fact, zoo-goers tend to show more environmental concern and care than the average person. But it’s not a foregone conclusion. The way zoos present the animals who live within can elicit positive or negative responses from visitors. The best exhibits will be ones that situate the animal in its natural habitat; that demonstrate concern for the animal’s needs; that stimulate conversations expressing appreciation for the animal; and that, in some cases, remind the visitor of what they have in common with the animal. Under these, ideal, circumstances, zoos can help to prevent the disappearance of wild animals from our sight and from our minds.

Jeanne Gang
How far should we go to bring back lost species?

Preserving the Things We Value

Can Psychology Help Save the World?

Susan Clayton
How can zoos and aquariums foster cultures of care and conservation?