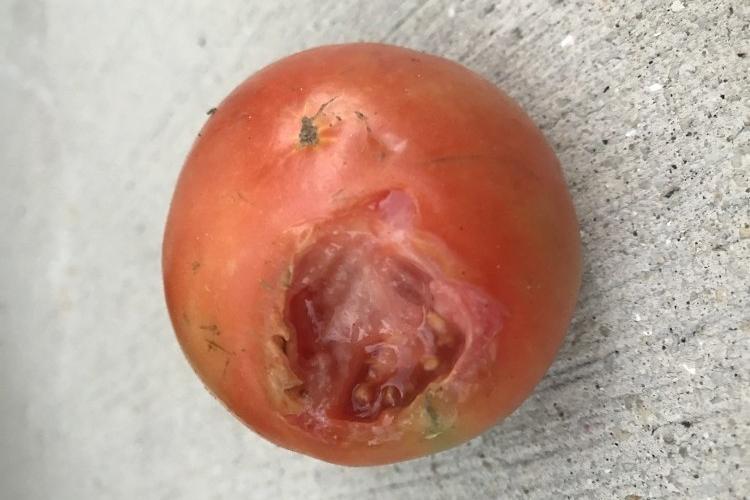 “And how’s Herm Magnus?” my dad asked on the phone one evening.

“Well,” I replied, “today I tried to get him to leave the suet feeder alone by swatting him with an oven mitt. I only got his tail, though, and he came right back. So, I guess Herm’s good. He’s full of suet.”

Herm Magnus became a fixture in our urban backyard early in 2017. From the start, Herm seemed self-confident, audacious, gutsy, and quite limber. Our furry neighbor had a real command of the room, or, as it were, our yard. Having moved in ourselves only the year before, we were slowly getting to know our backyard buddies. Birds of all sizes and hues arrived year-round at our feeders, and in the spring dozens of garter snakes emerged and lazed around on warm rocks, some even climbing our Arborvitae shrub. Once we saw a snake ball—gartersnakes tangled into a mess of slithery limbs. Was this a mothers’ and babies’ snake cuddle-fest? Or a reptilian orgy? Regardless of motive, it was a pretty impressive group hug for this armless animal.

And then there was Herm. 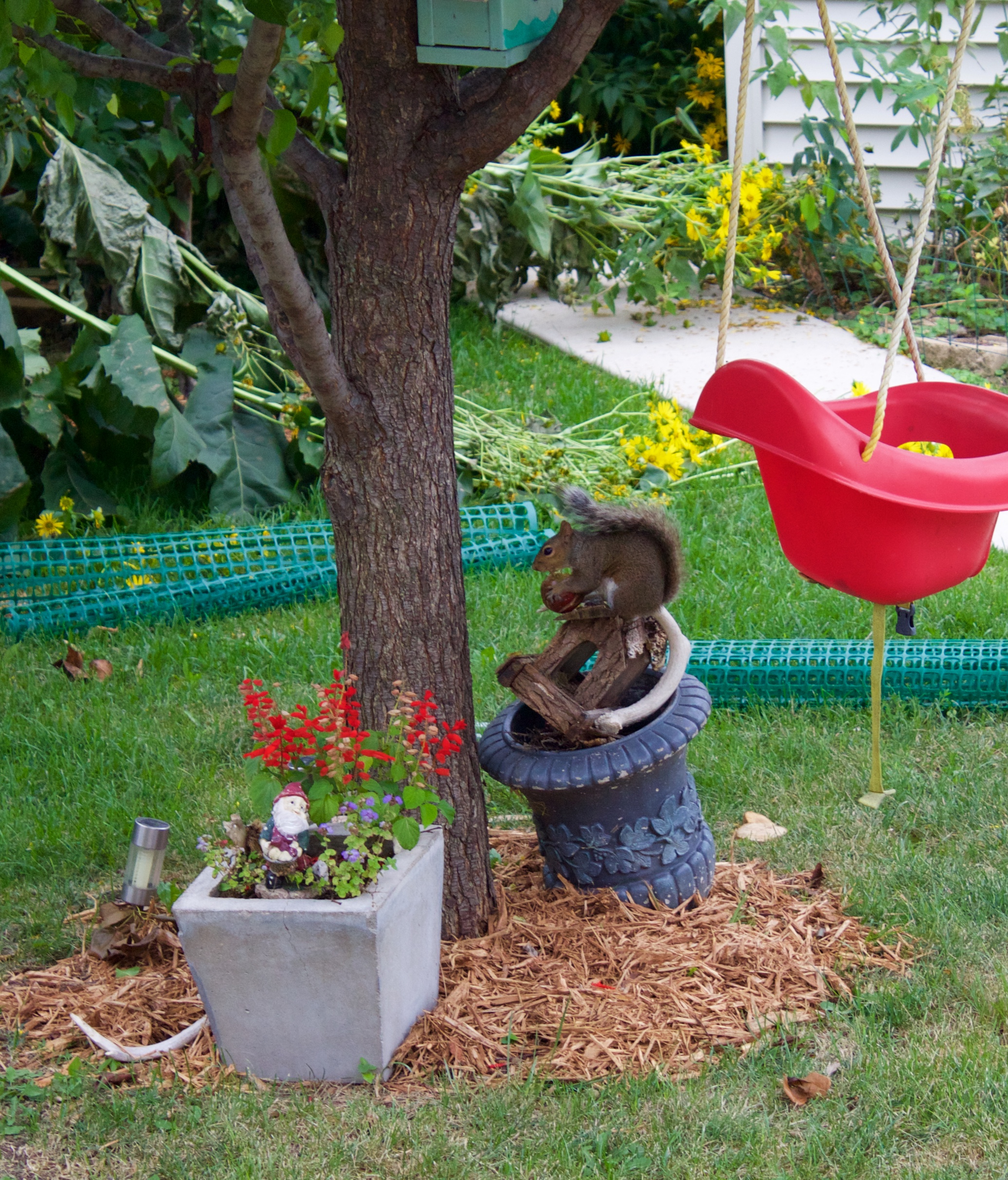 Herm ruled our standard 125 x 35-foot lot in Berwyn, Illinois. We naively thought that we had some control over our yard when we planted trees, native plants, flowers, vegetables, and a large trellis of hops. We filled a hand-me-down chicken coop with chicks hatched from a local kindergarten and added a compost bin, bird feeders, grill, patio furniture, hammocks, and rain barrels. Herm seemed to love it all.

Herm and our family had a fairly predictable daily routine. We would set food out for our wild and domestic bird friends. Herm would fleece us of our feed. Herm was a chunky and robust squirrel who could manage impressive acrobatics: we would regularly wake to see him upside down, holding on to the long cylindrical bird feeder, doing a squirrel’s equivalent of a keg stand. As he scarfed birdseed, we would knock on the window in an attempt to deter him—to no avail. So we went outside and yelled and sometimes managed to get him to lift his head, but ultimately Herm was not impressed. He became an expensive backyard roommate. 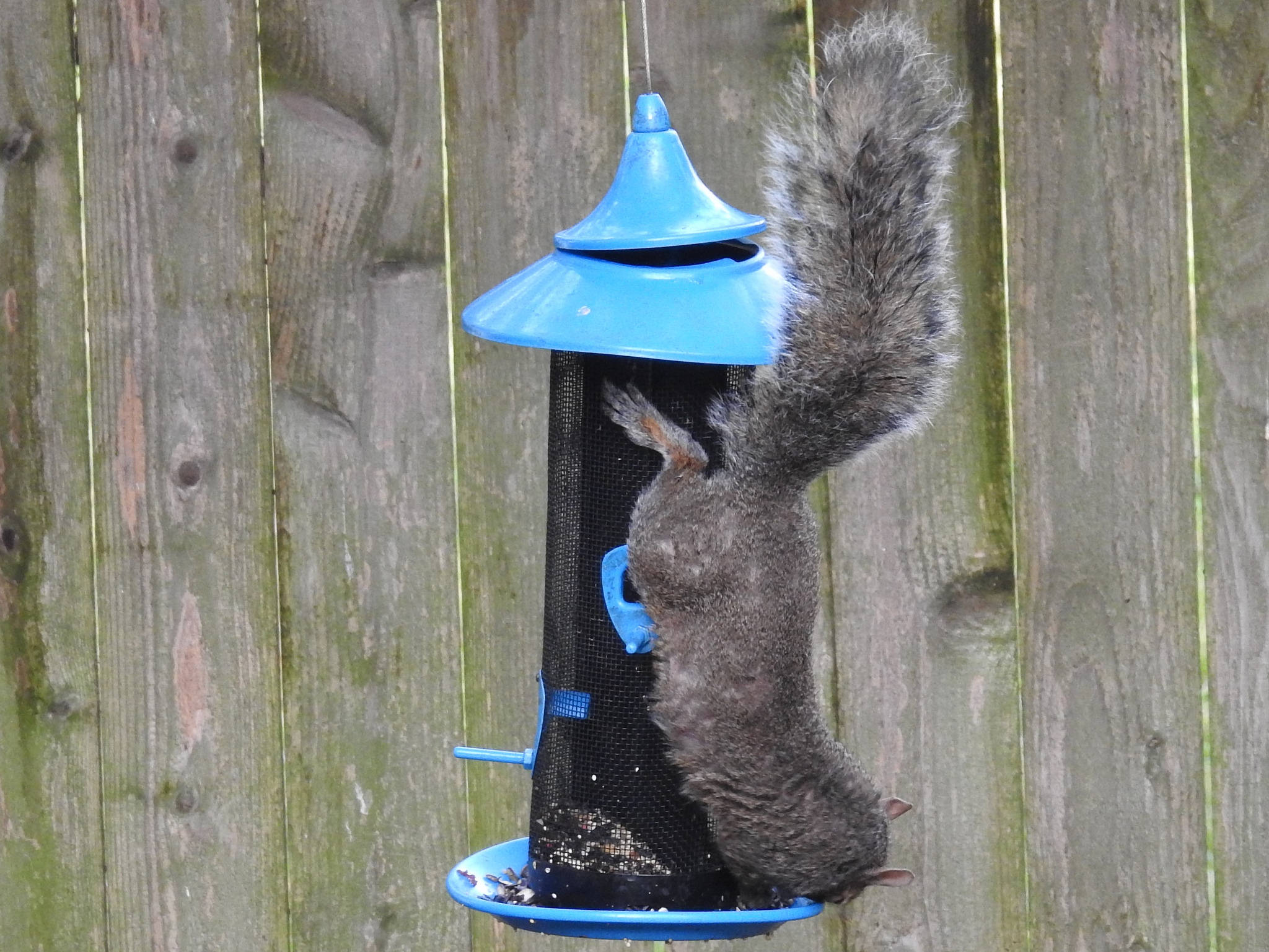 I’m not exactly sure why we named him Herm Magnus. We don’t know any Herms or Magnuses, so it wasn’t that he resembled anyone we knew. Yet we needed a way to talk about this creature. Saying “that squirrel” or “a squirrel” wouldn’t have captured the pizzaz and sass that was Herm Magnus. The action-movie-star quality of the name “Herm Magnus” seemed to fit.

Squirrels like Herm have not always been such a prominent part of the urban landscape in North America. Up until the latter half of the nineteenth century, squirrels were primarily confined to the woods. Etienne Benson’s 2013 paper, “The Urbanization of the Eastern Gray Squirrel in the United States,” explores the history of squirrels in the United States and notes that they were introduced into parks thanks to a Frederick Law Olmstead-inspired movement to bring natural beauty to cities. (Prior to this, squirrels had mostly been hunted out of cities by hungry citizens). But as people in growing cities began to see the importance of protecting green space for workers to recreate, introduced squirrels became the icon of urban nature. Benson observes that squirrels were part of a “broader ideology that says that nature in the city is essential to maintaining people’s health and sanity, and to providing leisure opportunities for workers who cannot travel outside the city.”

Squirrels also used to be fed as a way to educate children how to be kind. The practice fell out of favor in the 1970s when a different set of priorities became more widespread: that humans should aim to have less impact on the planet and thus not disrupt the natural food chain. Overall, despite the decrease in direct handouts, squirrels have flourished in urban spaces. Their novelty, some would say, wore off long ago.

What was it that Herm liked so much about our backyard? Was it the leftover chicken feed or the endless birdseed? Perhaps the fatty suet that he devoured? Or maybe the decorative deer antler that we placed in a tree that provided endless gnawing possibilities? Maybe it was our garden, where he could find tomatoes, strawberries, and other morsels to browse. He would often take one precise bite out of a veggie, then leave it to rot and attract flies. I felt like he was giving us the Sciuridae middle finger.

The deeper Herm settled into our yard, the more we took his resource hoarding personally. My husband bought new and “more squirrel proof” bird feeders. I researched ways to dissuade him from eating our veggies: poison, cayenne, wolf piss, BB guns, electric fences, etc. I considered them all, but opted for a birdbath. This choice was based on my discovery that veggie-biting squirrels are often just thirsty. I also came up with the idea to put panty hose on all my melons and tomatoes, which ultimately worked best as a method of squirrel deterrence. Having to chew through this silly fabric was enough to save a cantaloupe or two. And it gave Herm and I something to agree on: our hatred of confining hosiery. 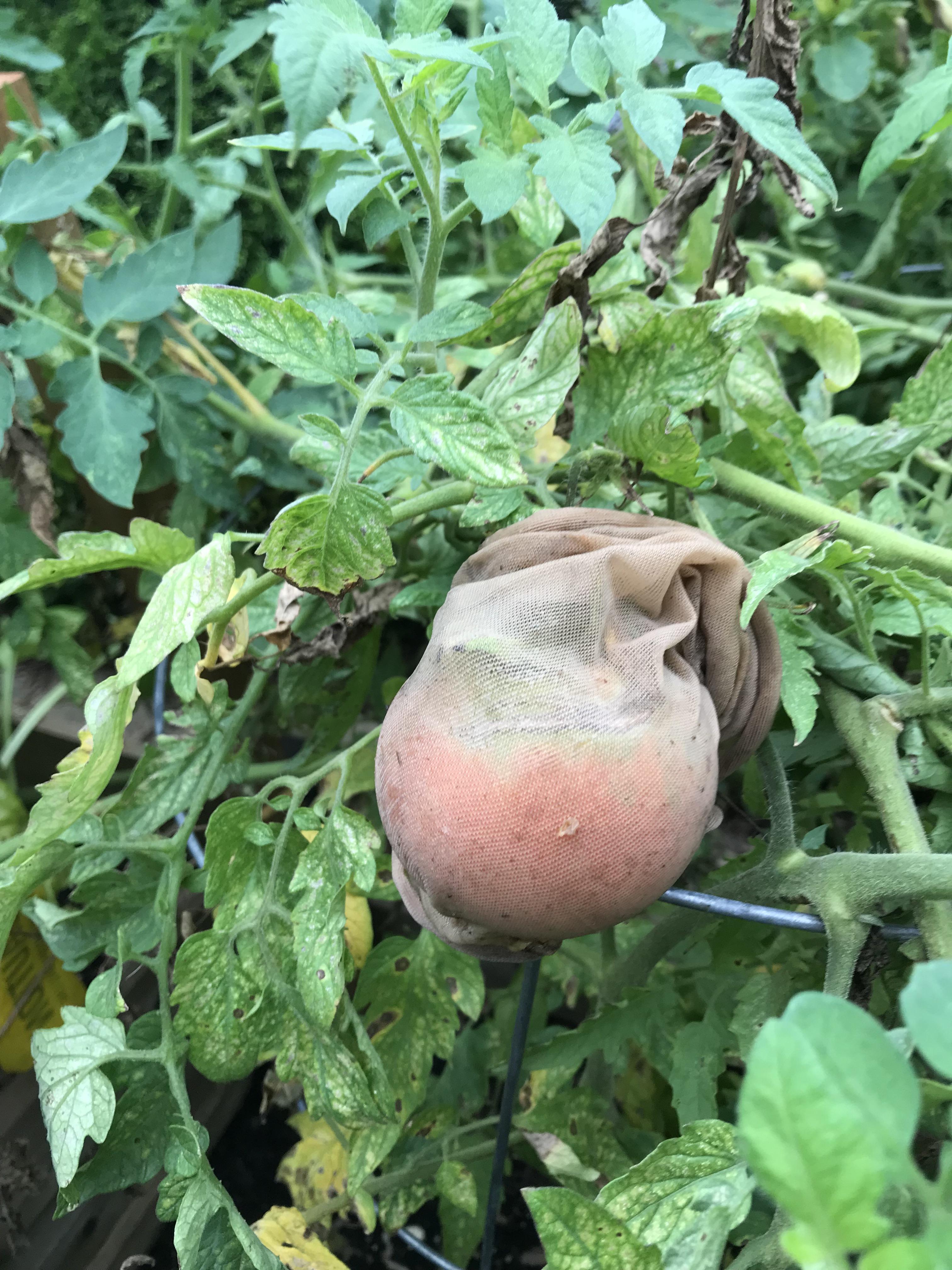 Panty hose or not, Herm was always lingering. The same day we put out a decorative pumpkin for Halloween, Herm promptly created a squirrel-size hole in it so he could devour the innnards. He could often be found in the tops of our ornamental pear tree or scrounging around the ground, looking for any naked tomatoes (naked tomatoes being the ones we forgot to dress in panty hose, of course).

It was mid-summer when we realized that Herm was a mother. It began to be clear that Herm had her nest in the front tree and was tending to her 3+ babies. I was eight months pregnant at the time, so this revelation made me see Herm in a new light. We were trying to make our home a warm and welcoming space, and Herm felt that at least our outdoor space was quite welcoming.

On a warm mid-July day, I went into labor and gave birth to an amazing little boy twelve hours later in an Oak Park (Chicago) bathtub. I gave birth naturally, painfully, and without medication. It was really hard. The painful, bloody, stunning experience was part of my transition into motherhood, and I’ve noticed a few things about myself—my new self—post-birth. I realized my body is amazing and that it can do amazing things—it’s capable of creating, birthing, and caring for the most impressive and beautiful child ever born (note: I hope every mother feels the same way about her own babies). I realized that modesty is silly: I don’t feel self-conscious breastfeeding in public, as I thought maybe I would. I realized I needed to reprioritize, cut the bullshit, and stick to what’s important. I will ask for whatever I need to make sure my baby is happy, healthy, and well-fed. And with my newfound self, I could relate to Herm’s confidence better. Herm’s big, bold self had more context: she made sure to get what she needed for her family.

A few weeks later, in early fall, Herm was found dead on our street. Could Herm’s confidence have led to her demise? Was she trying to chase away a predator? Was she tired from trying to tend to those ever-hungry babies? Was she as tired as I was during those early months? Was she just not as nimble and quick postpartum (also like me)? We’ll never exactly know what happened to Herm. But we do know our yard has never quite been the same, nor have our plants ever been so intact.

The circle of life continued. As the spring came and went, we would see Herm’s babies, now adolescents, cockily playing in our front yard tree. Occasionally one of them would find his or her way into the back yard, chew an antler, and scrounge some birdseed. But they were careful, not quite confident enough to tackle suet, chicken coops, or garden goods.

It’s now one year later. I take our son on walks and we watch squirrels in the park. He loves the little stuffed squirrel his grandma snagged at an estate sale. I feel like he and I are tourists taking pictures of the most mundane urban wildlife: squirrels. But I also see squirrels with new eyes, noticing more of their family dynamics. Who’s chasing who and why? What’s going through their minds? What’s going through my son’s mind as he locks eyes with them, trying to make sense of these fluffy creatures? 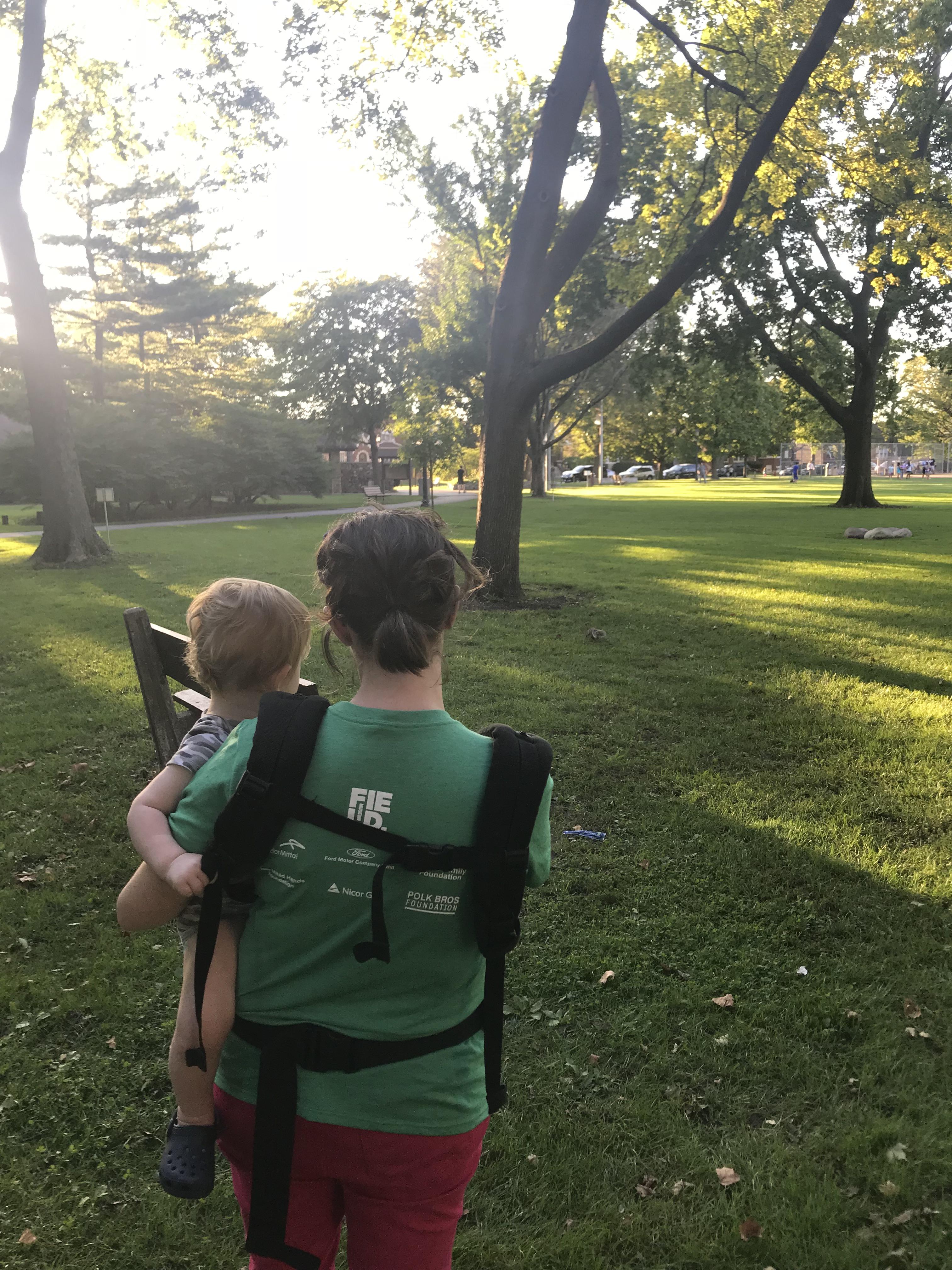 My experience of the world is more raw than it was before. Herm and I would likely be friends today if we could sit around and chat about the trials of motherhood—him, or her I should say, snacking on my tomatoes, and me sipping a glass of wine. Becoming a mother has made me understand others in a new way, at a time when people tend to be locked into strong opposing opinions. This makes me think it is possible to tap into our vulnerability and attempt to see the inherent goodness in our often seemingly messed up world. If we don’t all love this planet the same way we adore our children, how will we ever effectively take care of it? This is a call for us to channel our inner Herm and to be bold in our stewardship of the place where we live. And to enjoy a ripe tomato, even if it’s just for one bite.