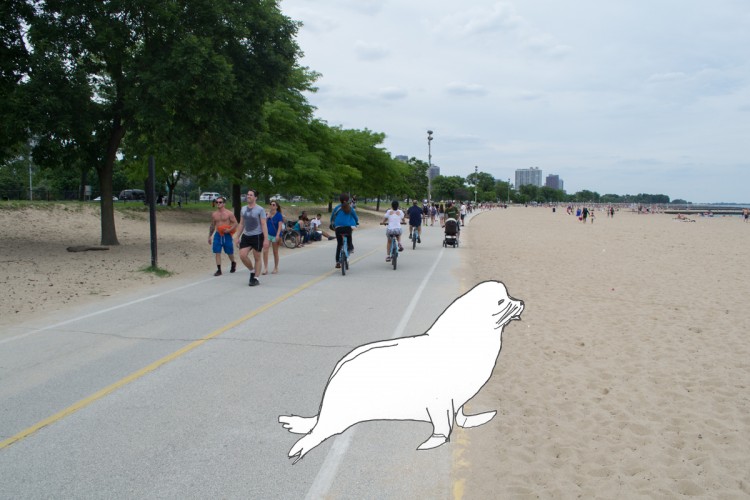 Sometime in early October 1892, a sea lion escaped from its pool in the Lincoln Park Zoo and slipped into Lake Michigan. Newspapers named the animal after Jim Corbett, a famous boxer who was in town at the time of the escape, and tracked Jim’s movements up and down the western shore of Lake Michigan. On November 11, 1892, a Chicago Tribune article reported:

Jim, after escaping from his pool in which he and his friends were wont to gambol and amuse the small children, lingered for some days along the shore near the park. Then he swam south and, not deterred by its many peculiarities, began to explore the Chicago river. His curiosity was soon satisfied. Where he has been since then is a matter of conjecture. It is believed, however, that he has called at Racine, Kenosha, and other way ports between here and Milwaukee, making his observations of these thriving towns at night. It was about 7 o’clock yesterday morning when he called upon the Cream City. He first visited the Milwaukee Dry Dock company’s slip, and the men at work there greeted him with a shower of stones. He barked his disapproval at this reception and swam off toward the rolling mills. Half a dozen Polish laborers secured the same number of shotguns and started after him, firing a number of ineffectual shots. Thoroughly disgusted Jim turned tail, made for the lake, and headed north. He is due at Sheboygan sometime today.

Several more reports place him in Milwaukee that week; on November 15 “smart newspapermen of Milwaukee thought they would get a scoop” by capturing Jim with a lasso, but “he was too sly, for he quickly vanished beneath the water and did not again reappear.” From there the reports get more fantastic and vague. It seems Jim Corbett, “truant” sea lion, was free.

The story of Jim Corbett’s escape has been in my mind for a while now, ever since I saw an offhand remark about it in an old Rand McNally guide and then tracked down a handful of news reports. At first I wondered if a sea lion could really survive in Lake Michigan waters—the short answer, apparently, is yes. There are abundant examples from around the world of pinnipeds finding temporary homes in fresh water. Sea lions, for example, regularly swim up the Columbia River in Oregon, all 145 miles to the Bonneville Dam, where they gorge on protected salmon and present a complex management problem for government wildlife agencies. Other species, like the seals of Lake Baikal, have evolved to live permanently in freshwater. Based on these cases, I’m satisfied that Jim Corbett’s survival was possible. I still wonder, however, why I like the stories about Jim so much. Did the nineteenth-century newspaper-reading audience chuckle for the same reasons I do?

I went to the Kovler Sea Lion pool at the Lincoln Park Zoo on a cool, sunny afternoon this spring. The animals these days are actually harbor seals, not sea lions: no outer ear, coasting with blimp-like serenity through the water. (Come to think of it, seals are like the cats of the pinniped world, solitary with spookily intelligent moon-eyes, whereas sea lions—rambunctious, eager, highly social, and barking up a storm—must be the dogs. I guess this makes the fearsome walrus an obese and bewhiskered cat-dog hybrid.) Several girls on a school trip stood beside the pool, looking at the top of the water and the refracted images in the glass wall, trying to triangulate the seals’ locations. One of the seals, departing from its usual underwater circuit, breached the surface right in front of the girls and shouldered onto the pool’s edge to look at them. The girls screamed with joy and fumbled to take a picture, but the seal soon plopped backwards into the pool.

That little moment of elated fear, when a caged animal makes eye contact and seems to forget or challenge its confinement, is of course one of the central pleasures of zoos. Lincoln Park Zoo’s continuousness with the rest of the park grounds heightens this effect for me; one minute you’re walking along the sidewalk dodging goose droppings and squinting at the names on the faded monuments, and the next—literally the next moment—you can be looking in an African lion’s eyes, two feet away. So when animals actually do breach that boundary and find a way to escape their enclosures, the act has the thrill of a broken taboo, a rupture that finally favors animal wildness over our control over it.

So the attempt to overcome human-imposed boundaries likely accounts for the appeal of Jim Corbett’s escape, for me and for nineteenth-century readers. The effect of reading reports of the comically ham-handed attempts to recapture the sea lion is sort of like watching a streaker on a soccer field. Hapless authority figures, thoroughly untrained for this task (in the case of Jim Corbett, policemen and rival newspapermen), throw themselves at the runner but fail to catch him in hilarious ways. The instinct is to laugh and cheer for continued freedom.

Although I assume that the way I celebrate Jim’s story as a fun oddity must also be the way Chicagoans in 1892 would have read it, things surely can’t be so simple. Such comparisons across time are never straightforward. A person picking up a copy of the Chicago Tribune in 1892 to read about a sea lion swimming free in Lake Michigan would walk streets crowded with horse traffic and pass backyards with goats and chickens rooting around. If they ventured to the southwest of the city, they would smell and see the vast operations of the slaughterhouses. By the late nineteenth century, decades had passed since the last bear and wolf had been killed in Chicago, though someone new to the city may have grown up on a farm or ranch that still dealt with the threat of these predators. Such a person, compared to most modern urbanites, no doubt had a more visceral understanding of animals—the lifesaving value of their meat and milk, their stench, the sound of their bellowing. Maybe they experienced an uncomplicated pleasure at seeing a peddler goad his dancing bear in the street. But the same person, for all the richness of this daily, lived experience of animals, couldn’t draw on what I do to fill out a larger vision—a century and more of ecological knowledge, the growth of environmental activism, and the rise of a broader ethics regarding animal treatment and even rights.

A narrow, human-centered frame limits the news reports about Jim Corbett. Several articles warn people against shooting the sea lion but mainly because he was monetarily valuable ($500, plus $150 shipping costs from California to Chicago, one article claimed). And, whereas today we might expect at least a gesture towards imparting scientific information, the reports instead completely anthropomorphize the sea lion and merrily speculate about his motives. A November 12 article in the Chicago Tribune applies a softly moralistic frame to Jim Corbett’s escape, writing, “It would be of no use to ask him to come back to his friends. He has chosen his fate and must accept it, probably with the result of a speedy exit from this mortal life, which he might have enjoyed for untold years to come but for his foolish leap for liberty.”

Such popular depictions of nature were common at the time. But they weren’t uncontested. New institutions like the Lincoln Park Zoo were attempting to supplant the dancing bears and menageries with a more ordered and edifying experience of animals. And in the two decades following 1892, a contentious public debate emerged between writers of sentimentalized, often fictionalized accounts of animal behavior—so-called “nature fakers,” among whom I think it’s safe to place the journalists covering the escape of Jim Corbett—and the growing ranks of professional scientists, who preferred a rational, empirical method of study and description.

The debate about nature-faking at the turn of the twentieth century returns me to my original feeling: the appeal of Jim Corbett’s escape is not so different for me as it was for its nineteenth-century audience. Perhaps there are more continuities than differences in the complex ways we think about animals. Similar debates about anthropomorphizing animals rage on today, especially in zoos, where a PR department might ask schoolchildren to name a newborn baby gorilla, but whose in-house conservation department would rather broadcast a more strictly scientific message. (A notable example of how these tensions still capture public attention was the uproar earlier this year after zoo veterinarians at the Copenhagen Zoo, in an attempt to educate the public about animal anatomy, dissected a giraffe and then fed it to the zoo’s lions before a public audience.)

And honestly, even the tone of the old articles feels familiar. The writing style is antiquated, of course (we probably wouldn’t call a sea lion a “brute” or a “monster” anymore), but the reporters’ gleeful attitude is alive and well in contemporary media. If a sea lion escaped today, you can bet that within hours there would be an active @JimCorbettSeaLion Twitter handle and a devoted online following (as there was for the cobra that escaped from the Bronx Zoo).

As for the real Jim Corbett, truant sea lion of Lake Michigan, he lived on in the press—if not necessarily the lake—for many years to come. In the first of several death reports, an April 8, 1893, Chicago Tribune story headlined “Corbett’s Body Found Near Racine” declared, “Jim Corbett, the famous sea lion, is dead.” Several fishermen, it claimed, “found his decomposed carcass floating on the waves a few miles from the harbor. Whether he committed suicide or was caught in an ice gorge will ever remain a mystery. The body was not towed to shore.” Two years later, a May 11, 1895, Chicago Daily Tribune article claimed that several men fishing off of 37th Street in Chicago “think they caught a sea lion.” The animal, with “shining black muzzle,” managed to escape, but they felt sure it “can be no other than the long-sought Lincoln park monster.” Still another year later, and after more obituaries, a sly August 27, 1896, Chicago Tribune article announced “Jim Corbett Loses Life: Sea Lion That Escaped From Lincoln Park and Was Killed Near Menominee Is Slaughtered Again.”

I hope Jim Corbett really did escape and that his swimabout in Lake Michigan lasted. In the absence of any hard evidence, and in the interest of seeing the world as a strange and wonderful place, I say he did. And I throw my lot in with the earliest article I could find on the sea lion, from October 12, 1892, soon after the escape. “‘Jim Corbett,’ the escaped Lincoln Park sea-lion is unquestionably the champion of Lake Michigan.”

All photographs with hand-drawn illustrations by Will Gosner.

I'm Will Gosner, a writer in Chicago. Elsewhere at @secndcitynature and @wgosner. Write me at wgosner at gmail dot com. I write about books, Chicago and post scans of things I've found at powerheadoverlines.tumblr.com. I also play music as the Main Chance and in my old band Lakesigns.