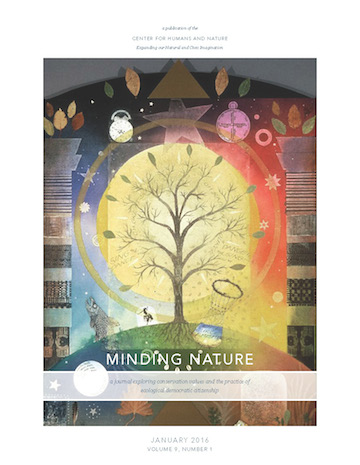 From Paris came the news of mute violence bent on causing death, and a few weeks later came answering news of spoken global consensus on climate action bent on preserving life. Terror was answered by hope. Those who would be president of the United States spoke at length about the terrorist attack in Paris, and some of them, seeking to turn it to political advantage, seemed to relish stoking the fear it provoked.

The human aesthetic—the perception and sensory contemplation of a subject—is so strongly influenced by the terms and phrases we adopt into our lexicon that we ought to pay close attention to them. We see, hear, and smell our environment using the senses we have evolved with over hundreds of thousands of years, and then we process and contemplate this sensory influx.

The Paris Agreement on climate change arrived at this past December promises constructive action to keep global increases in temperature below two degrees Celsius above their pre-industrial level. Although this initial step toward greater world cooperation on climate is most welcome, can we expect it to produce the desired results? And if not, why not?

The Root Cause of Climate Change?

On the surface, the cause of climate change is easy to explain. We are pumping heat-trapping gases into the atmosphere and this is causing Earth to heat up with potentially catastrophic consequences. But why, with full awareness of what is happening, do we continue to abuse our planetary atmosphere, thereby jeopardizing our very survival as a species? This is not easy to explain.

How to Walk on the Earth

You are walking, rather slowly and deliberately. Your attention is on the sensations of your feet contacting the ground: heel, sole, toes; shifting your weight, lifting, swinging your leg, and so on. You’re conscious of the texture under your feet; your body’s weight; the ever-present pull of gravity and the balance of forces keeping you upright. Your attention is just occupied enough to stay with your simple sensations.

Dancing Our Kinship with Animate Earth

Crows make directional lines—vectors—between each other in flight, shapeshifting askance geometries in the sky. Three of them now make a moving triangulation, black tricksters over the white expanse of field, taciturn sky and cedar standing sentinel along the salt marsh banking. It is a newly fallen snow. The limbs and trunks of scrub trees are trimmed with the soft and gentle stuff.

Two chinstrap penguins, Roy and Silo, longtime residents of the Central Park Zoo, have their own page on Wikipedia. They have distinguished themselves as the avian world’s most famous same-sex couple, not only having pair-bonded as far back as 1999, but having subsequently incubated an egg and raised a chick named Tango.

To Australian-born landscape architect Julia Watson, the sacred and the ecologically rich go hand-in hand. It is a point Watson repeats in the attic-like room on the sixth floor of Columbia University’s Avery Hall, the architecture building, where she teaches “Living Landscape Eco-Technologies” for graduate students during the spring semester.

On November 4, 2014, Melinda Levin, Filip Celander, and David Taylor, along with their Cuban translator and guide Karina Pino Gallardo, documented a performance by TECMA: Teatro Callejero Medio Ambiental (Street Theatre about the Environment) in Romerillo, a neighborhood in Havana.

Ecological Economics for the Anthropocene: An Emerging Paradigm

New Book: Ecological Economics for the Anthropocene: An Emerging Paradigm provides an urgently needed alternative to the long-dominant neoclassical economic paradigm of the free market, which has focused myopically—even fatally—on the boundless production and consumption of goods and services without heed to environmental consequences.