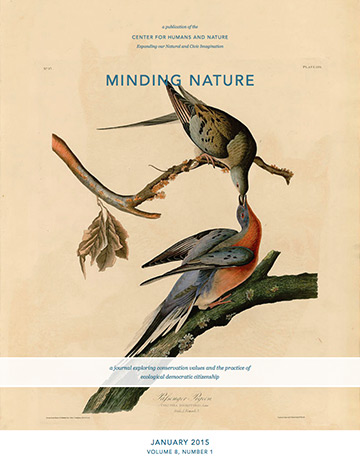 To act ethically—when we do so not simply out of habit or by accident—human beings draw upon concepts, values, and norms that we have inherited from philosophical thought, among other sources. We reflect and evaluate with and through these concepts. We also reflect critically upon them, re-interpreting, enriching, and extending them in response to changing knowledge and the possibilities that the world presents to us.

From the CHN Archive

When we began planning in 2007 for the launch of an electronic journal, we considered several names. Many were brilliant, but too long to fit on a single page. Others might have limited our readership considerably, but were near and dear to a couple of hearts. As is often a good idea, we finally returned to our origins and remembered a phrase, “Minding Nature,” that was hovering in the conversations at the Center’s founding.

Finding Your Own Passenger Pigeon

This past year was the centenary of the extinction of the Passenger Pigeon. Across the United States, Canada, and many other countries, this occasion was used as a time to commemorate this species and consider our role as the dominant species on the planet. The extinction of the Passenger Pigeon was a profound landmark in humanity’s interaction with other species. Humans had caused extinctions before, but this bird was not fundamental to our survival, as were Ice Age mammals.

The Perils of De-extinction

By: Ben A. Minteer

It wasn’t a tiger, at least not in the biological sense. But in the cultural imagination of British and Irish sheepherders transplanted to “Van Diemen’s Land” off the southeastern coast of Australia in the early nineteenth century, the carnivorous, striped creature with the stealthy nature certainly fit the bill. Dubbed the Tasmanian tiger—or, alternatively, Tasmanian wolf (which it also was not).

Just how far should we go to prevent extinction or bring back a lost species? Given the relevant science, what can we do versus what ought we to do? How wild a world do we want, as opposed to how wild a world will we tolerate? Of course, nature should matter to everyone for selfish reasons—for providing basic subsistence needs as well as ecosystem services like cleaning our air and water.

The Political Economy of the Capital System: Food, Climate Change, and Violence

For those concerned with both human and ecological well-being in the world today, it is essential to grasp the dynamics of the global political economy. In particular, the system of capital should be viewed as a system using a thermodynamic (entropic) perspective. In this article I focus on the interrelationship among violence, climate change, and food production.

Toward a New Materialism: Matter as Dynamic

At least since the time of Descartes and Newton, Western thought has understood matter, including the matter of living bodies, to be basically and primarily mechanistic in nature. But in recent years, philosophers and theorists have been explicitly challenging this ontology and seeking to put forth new, more dynamic theories of materiality.

Man Is Integral With Nature

The traditional perspective for physiology, as portrayed by Galen and Harvey, is like Lego Blocks, with one biochemical process linked to another until an entire biochemical structure is revealed. In contrast to that post facto narrative, a predictive approach can be asserted—there actually are founding first principles for physiology that originated in and emanate from the unicellular stage of life.

William Ruddiman and the Ruddiman Hypothesis

Trained as a marine geologist, University of Virginia emeritus professor William Ruddiman for the past fifteen years has worked on a hypothesis that posits that pre-industrial age humans raised greenhouse gas levels in the atmosphere. Looking back seven thousand years into the Holocene—the current 11,500-year-old geological epoch—Ruddiman has proposed that early agriculture emitted enough methane and carbon dioxide to offset what would have been a global cold cycle.