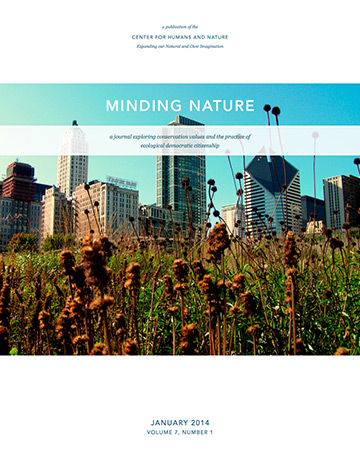 The city is a Janus-faced enigma, at least in the Western political tradition. According to the book of Genesis (4:17), the first city was established by Cain, and all cities partake of the problematical character of this original founder. Archeologists agree that the appearance of cities marked a fundamental transition in the history of human culture as a sedentary society of agriculture came to dominate over the more nomadic existence of hunting and gathering and pastoral husbandry. In historical time, the city has taken on two fundamental, coexisting identities. It is a space of market transactions and the birthplace of individualistic self-identity.

The time to love is now. Now, while we can choose how to live and how to die. Now, with beauty apparent: breathe, look, touch, savor, and listen. Listen to learn, for you cannot love what you do not know. You can control, contain, and even kill, but you cannot love without first learning. The strongest acts of love are grounded in the most intimate knowledge of well-being for another because love—despite all the cultural confusion and carelessness surrounding it—is doing the best for what we value the most with no expectation of return; only the sincere hope that with loving, what we value will thrive.

In an ideal world, democratic regimes pressured by informed (and alarmed!) citizens would presumably move aggressively to address global warming. After all, protecting the future of the planet with vigorous policies, curbing carbon emissions, and incentivizing alternative (renewable) energy would (and should) come naturally to conscientious nations responding to energized citizens. Democratic deliberation is designed precisely to help selfish individuals reformulate their interests in the language of the communities to which they belong—to move from “me thinking” to “we thinking.”

Before I answer the question: “How is nature critical to a twenty-first century urban ethic?” I first need to ask the more fundamental question: “What is nature and how is it constructed by people in our increasingly different and diverse urban communities?” Cities of difference are places where we are “in the presence of otherness,” as Sennett puts it—namely, our increasingly different, diverse, and culturally heterogeneous urban areas. Difference is, in my opinion, a more expansive and useful concept than diversity, which has become virtually synonymous, in the United States at least, with race/ethnicity and/or gender. Sandercock points out that “Difference . . . takes many forms . . .”

Dickens was describing an earlier epoch of revolution. Today another epoch of revolution has arrived, a recurring event in the histories of the universe, Earth’s community, and humanity. These embedded histories of change are wheels within wheels. They sometimes turn together, spinning out intricate weaves of increasing complexity. They sometimes whirl in opposition, destroying what the other has created and creating something new out of what the other has destroyed. They are always in relationship with one another.

In 2007–2008 I took a year-long sabbatical supported by a Lilly Faculty Fellowship from teaching Hebrew Bible at Louisville Presbyterian Seminary to write a commentary on the book of the eighth century B.C.E. prophet Isaiah. During that same year, my spouse and I attended a master gardener class through the Purdue Agricultural Extension Service in Indiana. These two activities converged as I noticed, more clearly than I had seen in many years of studying Isaiah, the ancient prophet’s own observations of the natural world.

In restoring a piece of land, big or small, a person is asking questions not just with mind but also with body. If a restorationist is honest, she probably pauses at some point and thinks: Why the hell am I breaking my back for this? In the short term, it can be difficult to perceive what, if anything, has changed due to one’s labors. Restoration workers or stewards may make decisions that result in disappointments even in the short run. In the medium term, climate change will affect, and possibly undo, the good work a restorationist is trying to accomplish.