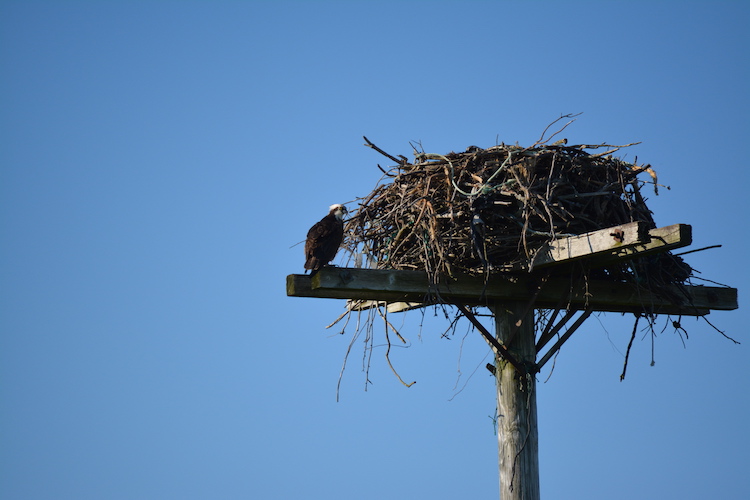 My first day maintaining trails on Martha’s Vineyard, my supervisor said, “When your friends ask what you do, tell them you make the island beautiful.” He drew out the word in a sing-song way. “Beeeaauuuty-full.” His sprightly energy provided a nice counter to the grogginess the rest of us felt, starting our workday three or so hours before most people. I fired up a weed-whacker and set out on the trail. As I cut through vegetation, the gentle mist thrown by dew-coated leaves filled the atmosphere with a verdurous perfume. I was making the island beautiful. 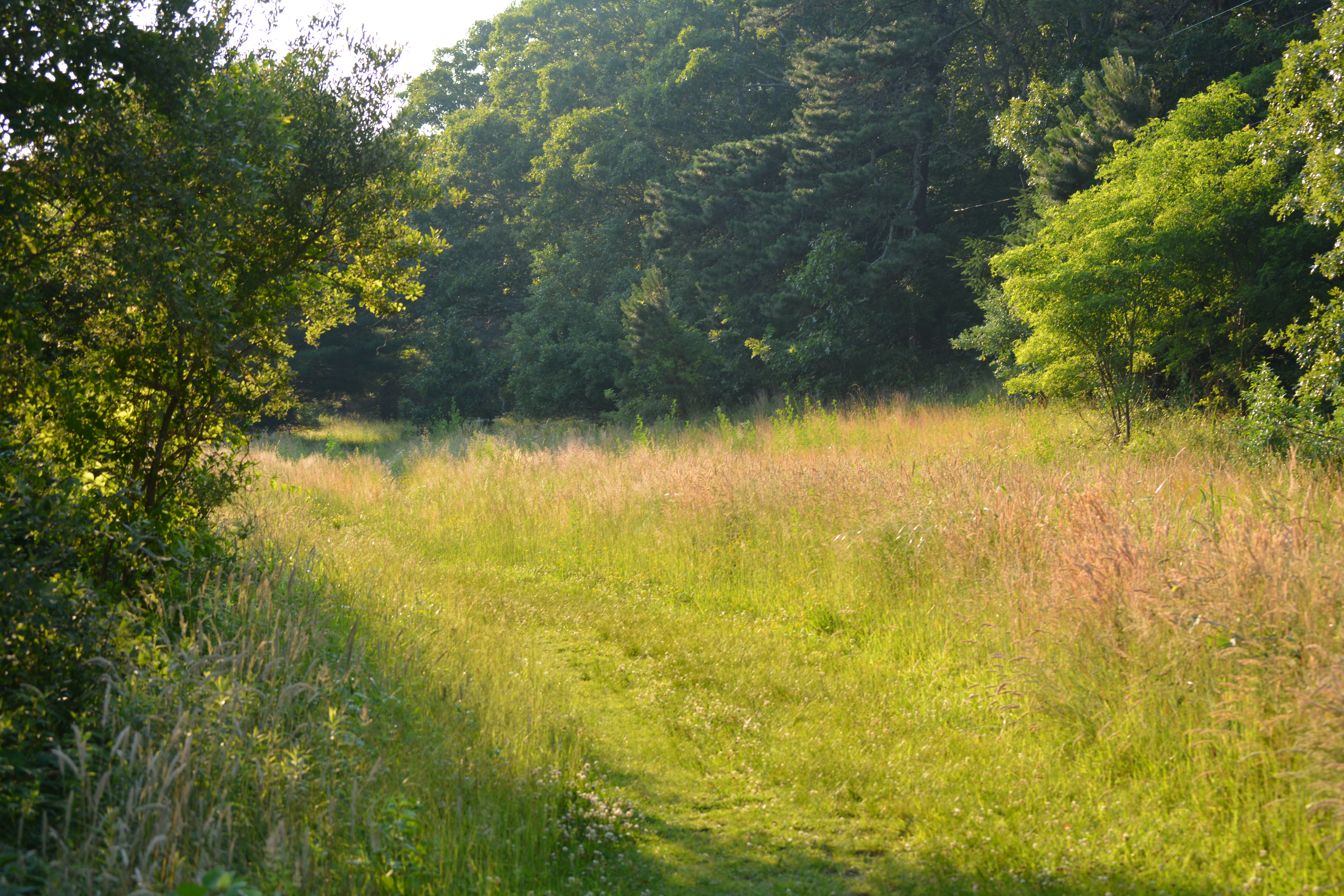 To consider walking through tranquil woodlands with a screaming weed-whacker an act of beautification does not make immediate sense, and it took me a while to come to terms with the notion. Lovers of nature are quick to be self-effacing: we embrace the praxis that our favorite places would be better off without us. Tread lightly, leave no trace—i.e., don’t bring your weed-whacker into the woods. The poet Robinson Jeffers, writing of Sovranes Creek, said: “No imaginable/Human presence here could do anything/But dilute the lonely self-watchful passion.”

It’s hard to disagree. As far as human footprints in wild places go, our track record is, on the whole, abysmal. But at some point Jeffers must have diluted that “lonely self-watchful passion” in order to transcribe it into verse, and I am thankful that he did. There is great potential in human presence, in human intervention, for us to cultivate appreciation for a place and take care of it—even if we frequently tend to do the opposite. A notable success story? Osprey platforms.

In his 2001 book, Return of the Osprey, David Gessner wrote, “If there is a feel-good element to this story, it’s at least partly deserved. For once we did something right, we can say to ourselves: for once we didn’t screw up.”

Mass Audubon runs the Vineyard Osprey Monitoring Program out of the Felix Neck Wildlife Sanctuary; they call the osprey a “signature species” of the island. According to the data collected by their 42 volunteers in 2017, Martha’s Vineyard is home to 332 ospreys and 105 active osprey nests—but this wasn’t always the case. In 1969, across the island’s eighty-seven square miles, only two nesting pairs of ospreys lived here. Osprey populations were decimated due to DDT, but even when DDT was banned, numbers still stagnated. The main problem was a lack of suitable nesting sights. The species’ recovery was largely thanks to a number of humanmade nesting platforms, which proved invaluable to these stately, bandit-eyed raptors. “The downside,” to quote Gessner again, “is that platforms increase the birds’ dependence on humans, and create a less wild home.”

At first blush, it does seem a shame that an osprey’s home is something we have to help build. It is not a stretch to see how one might consider the tall, unnaturally straight poles an interjection—a simulacrum thrust into the horizon, a poorly deployed line break in the sky’s poetry. 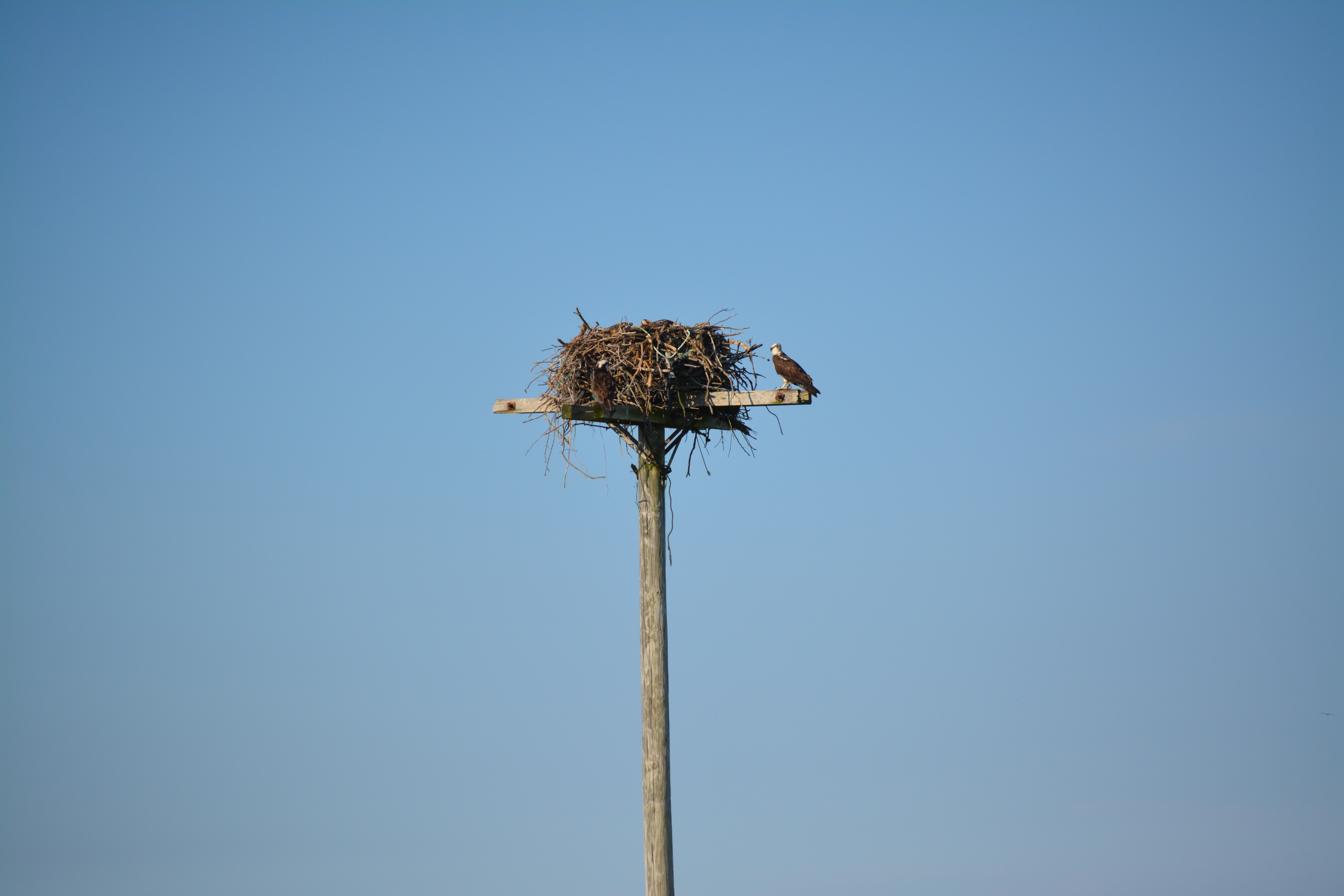 On the contrary, what is more wild—an island with no ospreys, or an island with plenty, who just happen to live atop thirty-foot poles provided by the electric company? There are arguments for either side. I prefer the ospreys, and I see it as a source of encouragement that good people were willing, and still are, to engage with the landscape in a way that benefits these birds.

Spend a day on Martha’s Vineyard and you will see wildlife. Just this morning, I watched two speckled fawns vault over tall grass in a meadow, maybe twenty-five feet away. There are loads of deer (fifty per square mile), rabbits galore, enough birds to keep birders plenty occupied, and plump seals routinely bob along the shoreline—amicably, if sometimes alarmingly, close to swimmers. There is something about ospreys, however, that sets them apart. I don’t want to use the word “sacred,” but, for me, looking at an osprey is an experience of reverence, of ever-renewing awe.

I see many. They’re easy to find—just look for a platform. That’s one of the underlying benefits of osprey platforms: if you want to see an osprey, you know where to go.

It’s not scarcity that makes these birds feel different, but perhaps the knowledge that scarcity was overcome: these raptors were scarce, destined to remain so, but no longer are. It’s the very feeling Gessner cites: “for once we didn’t screw up.” Looking at ospreys, I see optimism embodied with just shy of a six-foot wingspan. Since they’re so easy to find, you feel you get to know the birds; they are a constant in my life—a positive. If I go for a walk, I’ll stop by a platform and look to it expectantly, as if the resident ospreys might be eager to dole out advice and good tidings.

There is also the sui generis nature of the osprey—a one-of-a-kind raptor, the only member of the Pandionidae family. You can call them fish-hawks or river-hawks, but taxonomically speaking, they aren’t hawks. They live by the sea, could be mistaken for eagles, yet they are not sea eagles either. They are ospreys. With this uniqueness comes a special sort of appreciation.

Ospreys serve as a personal reminder that human meddling is not always bad. They make me feel better about bringing a weed-whacker into the woods. Just as humans built the platforms atop which the ospreys nest, I help make sure there are trails for people to walk, so they can see the hills, rock walls, meadows, overlooks, and ospreys this island has to offer. Walter Van Tilburg Clark described the stare of a hawk as “never flagging in intensity but never swelling beyond containment.” This, I believe, applies to the stare of an osprey, and to the implementation of human touch on a landscape. It’s a fruitful mindset. Widen a trail so two walkers can stand shoulder to shoulder; put down wood-chips to provide a safe, level walking surface; nullify the unruly brambles; don’t mess with the milkweed. Be diligent—but don’t go too far, don’t be heavy-handed. The best paths retain subtlety. But because they exist, more people get outside; because people build platforms, more ospreys build nests. Where the natural world overlaps with urban and suburban development (osprey platforms, for example, are often found in people’s yards), it is more helpful to consider ourselves part of the equation rather than something that needs to be subtracted from it. Here, Jeffers’ “self-watchful passion” is not so lonely.

One day, after my trimmer ran out of fuel, I tossed it over my shoulder and followed the trail back to the truck, to fill up and pick up where I left off. There was a unique sensation in following the tall, straight, newly trimmed hedges on either side of the trail—whisked around blind corners by walls of vegetation. The path opened up to a large meadow, which opened up to the sea; a soft breeze ruffled the tall grass on either side of the mowed path I walked on.

With my machine silent, my orange earmuffs pushed up to my temples, I heard wind and shorebirds, the distant susurration of the ocean, and, eventually, the chirps of an alarmed osprey—rising parabolically in pitch and volume, responding to my presence. I stopped and watched the bird flying around the nest while I stood in the trail. As the osprey’s silhouette stood out against the cloudless summer sky, I thought: this moment would not exist if somebody hadn’t built that platform, if somebody hadn’t cleared this trail. My wild encounter was humanmade, in a sense. I am okay with that. I suspect the ospreys are, too. 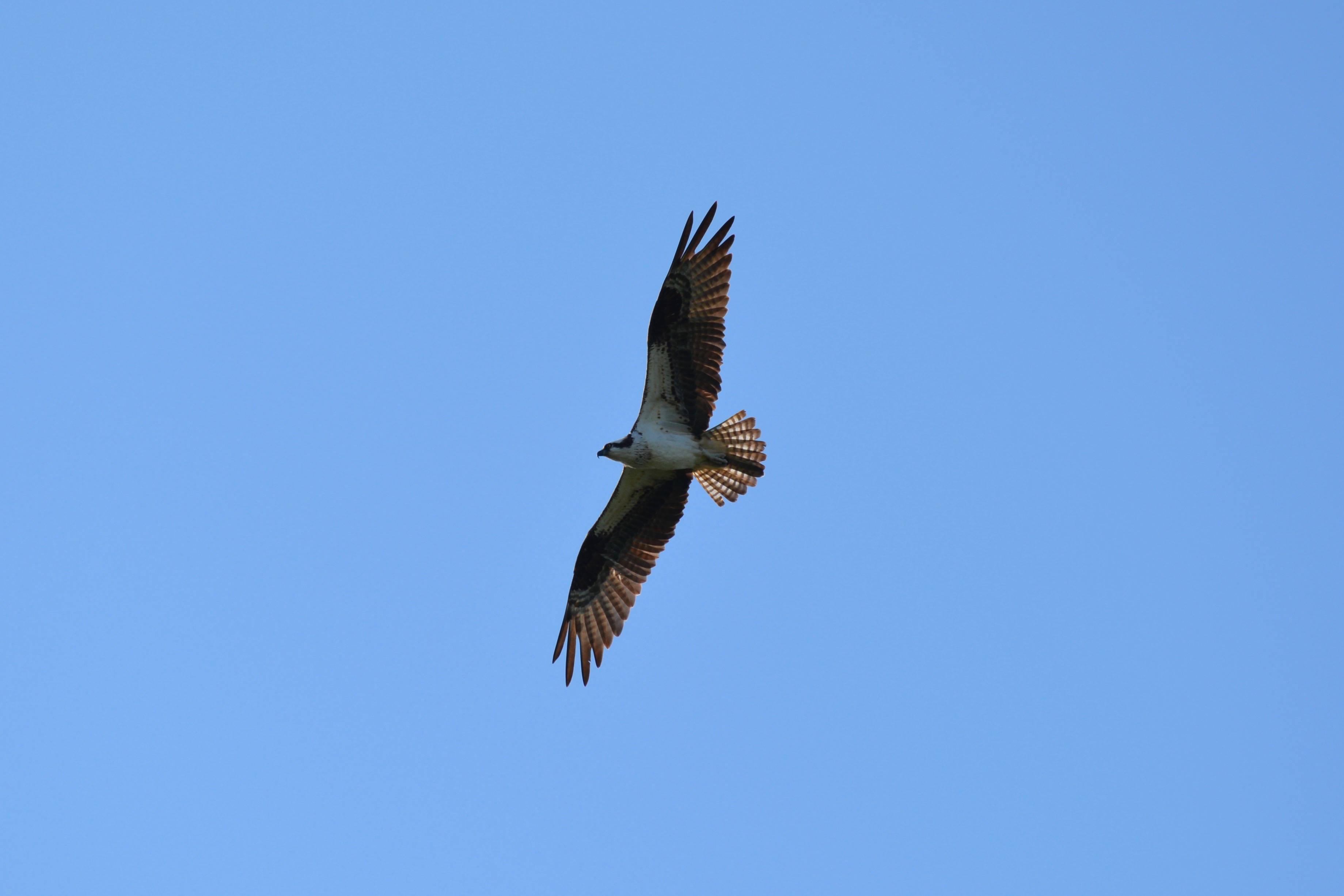