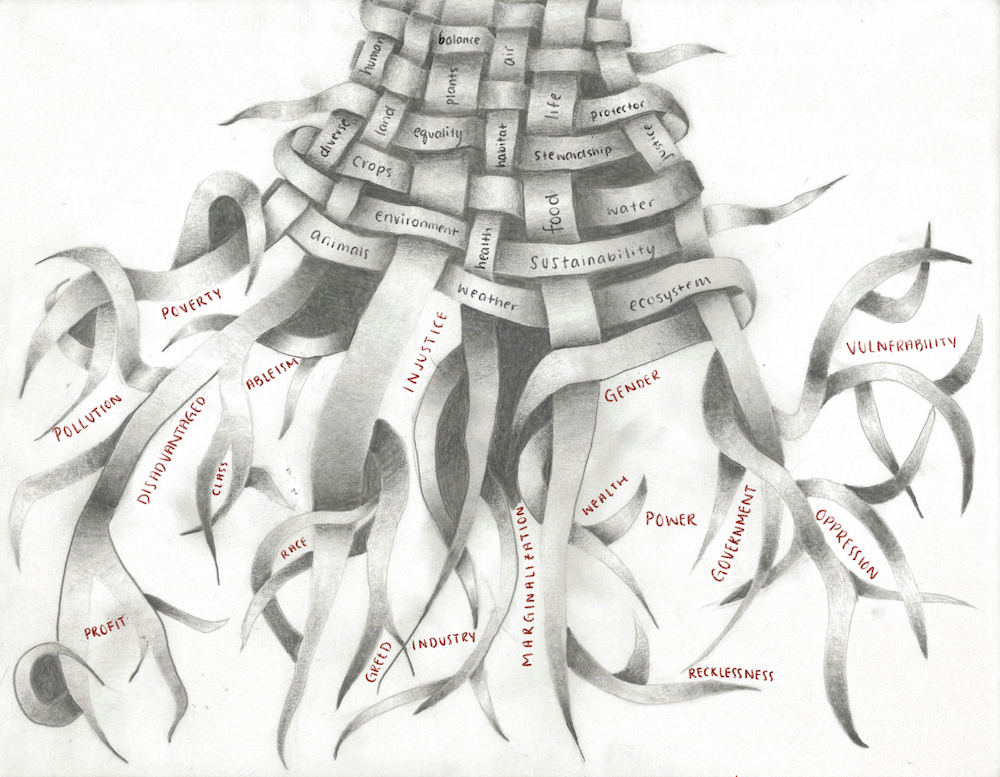 As pollution continues to fill the planet and temperatures increase, developing new technological tools and novel scientific research is no longer sufficient to combat climate change. Ceasing or reversing climate change must be centered around its ethical aspect. Environmental ethics embodies the relationship humans hold with the environment from a moral perspective. It allows us to develop the importance of the land’s relationship with the life it sustains. The injustices of climate change are embedded within the interconnectivity between humans and the land, and they cannot be addressed without acknowledging the disproportionate environmental consequences on minority communities. My artwork, combined with the ethical readings that inform it, illustrates the significance of the interdependent nature of our world.

Interwoven, the accompanying art piece, depicts a basket weave that represents the interwoven factors of humans, non-human species, the land, and everything in between. Each “string” in the weave is supposed to resemble the roots of a tree. All the roots are intertwined with each other and that creates a strong support for the tree, which represents all life, to grow. There are many words that are written on the basket weaves to show the positive outcomes of an interconnected life. Each factor is represented as a root because these factors represent the basics of life in the same way that roots create the foundation of a tree’s life. Toward the bottom of the drawing, the roots start to separate because of the injustice suffered by the marginalized people. The words written between the roots—in red to represent the pain suffered by the marginalized—show the actions and objects that are untangling the environmental balance. If we do not address these injustices, the roots will continue to separate and weaken. Only by recognizing the interconnectedness of all systems will humans understand that there are consequences to our current consumerist lifestyle.

Every system, living and non-living, human and non-human, is interdependent. Our land was built on the interconnectedness between humans and nature, as exemplified in Robin Wall Kimmerer’s narrative, “Skywoman Falling.” Kimmerer, an Indigenous woman who tells the origin story of her people, depicts how animals sacrificed their lives to help Skywoman build a land on which not only she but also the animals could live. In return, Skywoman brought plants for the animals to eat and inhabit, creating a co-dependent relationship.[1] The fate of the land and humans rest in the hands of each other. In a similar fashion, each weave of a basket depends on others in order to form a functioning object. Without one, the entire basket can fall apart. Similarly, Kimmerer writes, “Food plants and people act as selective forces on each other’s evolution—the thriving of one in the best interest of the other.”[2] Without people tending plants, the plants’ growth would not be as bountiful, and without plants, people would not have food to survive.

Although the interconnectivity of different systems is well recognized, this relationship is not only positive; it can also cause destruction. The pollution humans emit into the environment is depleting the ozone layer, leading to increasing temperatures that damage habitats, crop growth, and the weather. These consequences will eventually harm human bodies through impacts to their food, water, and air. Damages cannot be isolated. Just as Sheila Watt-Cloutier, an activist advocating for the cultural rights of the Inuit in the Arctic, describes the Arctic as “the health barometer for the planet,”[3] whatever happens in one area of the world will affect every other part of it; it is only a matter of time. Damage in the Arctic is just a preview. Although it is easy to ignore the toxic fumes coming from factories that mass produce our products, the damage is still being done. The effects are not immediate, but if we recognize the interconnectedness of all systems, we will understand the importance of reducing pollution. The imagery of the basket becoming weaker when one weave is removed also reflects how the relationship between earth systems is damaged when one system is targeted.

The way we use our resources should reflect the value of this relationship with the environment. However, the reality is that the current state of our environment is very damaged. Although climate change is a global phenomenon and everyone is affected, there is still a skewed vulnerability. Those who contribute the most pollutant emissions are also typically those with money. Watt-Cloutier writes that the wealthy can buy their way out of these dire situations. They are “buying the right to pollute.”[4] They can purchase new houses and move away from the eroding shorelines, but the less advantaged are not given this opportunity. They cannot afford to escape.

Certain communities are disproportionately exposed to and affected by pollution, and the fragility of the environment is in part caused by the injustices minority groups face. Those of lower economic status and people of color are overlooked and ignored. Waste facilities, landfills, and factories are more likely to be located within or near these communities. The voices of these communities are silenced by large corporations and the government, which allows for further environmental degradation.

The struggle to hear voices from marginalized communities can be seen in the 2006 film Maquilapolis: City of Factories. The women living in the neighborhood shown are seen only as “objects of labor.” They are forced to confront this truth repeatedly; if they ever speak against the corporation, they are threatened with losing their factory jobs and reminded how easily they could be replaced.[5] By instilling them with this fear, industries take advantage of these women, treating them and their land as dispensable, justifying the degradation of their environment.

My art piece aims to depict this hierarchy in the interconnected relationship that is also shown in the film. Those “roots” towards the bottom that are untangled represent the minority communities that are continuously targeted and ill-used. Because of this, they are in a vulnerable state that allows for continuous marginalization. In The Right To Be Cold, Watt-Cloutier explains how basic rights—the rights to housing, food, and ownership—are stripped away. No matter how much these people want to stand up to industry, they are still under their control because they must work for them.

The whole system must undergo reform. Marginalized communities do not deserve to have their homes and backyards degraded for the benefit of large corporations. Selfish and materialistic practices are valued more than the fair treatment of minority communities and their homes. These communities are oppressed and dismissed.

The problem persists because it is nearly impossible to solve; these inequalities make it very difficult to find an ideal solution to climate change and climate justice. Without addressing them, it is impossible to develop a solution that will diminish or reduce the consequences of climate change because silenced communities continue to be mistreated by those with wealth. We must hold the advantaged accountable. Without the recognition of this unequal power, the basket will continue to untangle until it is useless in the same way the mistreated environment will eventually become futile to humans. The mechanism for the future must be “social approbation for right action: social disapproval for wrong actions.”[6] Climate change can no longer be viewed only from a scientific perspective; we must take an ethical approach. To have experience is to have knowledge. Those who are experiencing injustice should be valued. They are the ones who are weaving the basket—which represents all systems working in sustainable and healthy relationship—together. Without addressing the factors that are ripping the basket apart, life as it is meant to be can never be attained. Environmental injustice must be recognized and addressed before climate change can be fixed.

[3] S. Watt-Cloutier, The Right to Be Cold: One Woman’s Fight to Protect the Arctic and Save the Planet from Climate Change (Minneapolis: University of Minnesota Press, 2018), 205.

Renee Lee is a senior at Cornell University where she is pursuing a degree in Food Science and a minor in Nutrition and Health. Growing up on Long Island, she has always been fascinated with the environmental impacts of marine life. She hopes to contribute to developing a sustainable relationship among food, the environment, and consumers.