Mid-afternoon twilight ushers each hunter from the darkening forest to the warmth of the cabin. One by one, we stomp the snow from our boots, lean rifles in a cabin corner, and hang damp mittens and hats around the woodstove. The day’s stories—how many deer seen and where, the pattern of wind in the back of the valley, barked scraped by a rutting buck, the bleats of a distressed fawn—get told and retold, mixing with the memories of walks in these same woods stretching back through decades. As the stories flow through the long Alaska evenings, we learn more about the island than we ever could as a single observer. This ever-growing conversation is like being a part of a multi-headed, many-bodied beast—a creature able to spread itself across the landscape, peering into ravines, scampering up hillsides, and creeping along beaches, easing its many eyes and ears into the lives of deer.

This pooling of insight and observation, this collective inquiry into the patterns of a place, is the oldest of human conversations. Richard Nelson, a cultural anthropologist, steeped himself in such a conversation while living with Inupiaq hunters in the mid-1960s. At the time, dog teams were the only means of travel, hunting the primary source of food. Nelson pulled together his own string of dogs and traveled with his new neighbors across sea ice and tundra. Tucked into tents or nestled into snow houses, the men talked endlessly about shifting ice and elusive seals, blowing snow and distant caribou. In the introduction to Shadow of the Hunter, Nelson observes that along the harsh and frozen Arctic coastline “no moment of life was bought without the fullest use of the human genius.”

Although a hunter’s success hinges on an astute mix of athleticism and knowledge, patience and persistence, Nelson’s use of the word genius is not limited to any individual’s intelligence. A hunter’s success, in the severity of the Arctic, was entwined with his community’s traditions about sharing meat and wisdom and physical labor. The genius of Inupiaq culture is clearly seen in Nelson’s description of hunting bowhead whales, a task far beyond the reach of any single person. A complex tradition, honed by a thousand thrown harpoons, defines a role for the strong back of the young as well the depth of mind of the old.

The Inupiaq, Nelson concludes, not only hunted to live but lived to hunt. Far from the cold ice, in the relative ease of the coastal rainforest with supermarket shelves within easy reach, no moment of my life depends upon the deer I kill. While I don’t hunt to live, I do live to hunt. Choices of work for myself and schooling for my daughter are made with the priority of keeping the fall calendar open for those precious weeks in the woods. Of the remaining 300-plus days in the year, none so completely engage my senses and sensibilities, my heart and humanity as the time searching for deer. 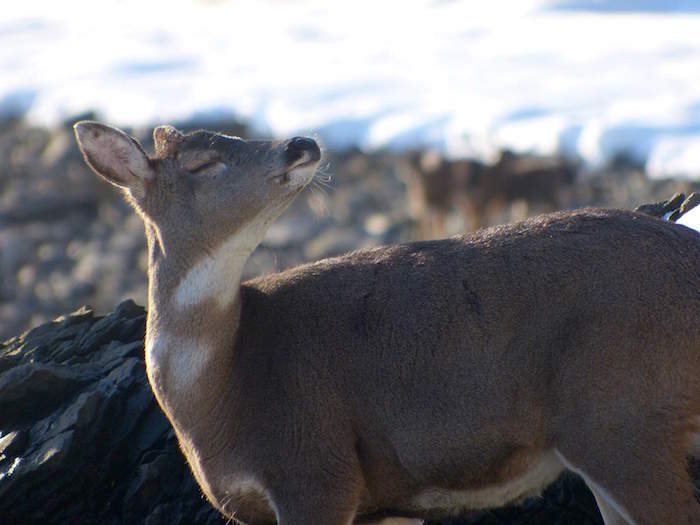 A deer’s senses—its parabolic ears, keen eyes, and exquisite nose—is honed by a million years of predator avoidance. The evolutionary pressure of the hunt has similarly shaped the mind and muscles of humans. When I am hunting well, each step is calculated, feet avoiding the snap of downed twigs, legs sliding around the raspy scratch berry bushes. I stand for long minutes, eyes calmly scanning between trees and up slopes for a twitching ear or flicking tail. I’m aware of each puff of wind and imagine the widening of cloud of my scent, as visible to a deer’s nose as orange fog to our eyes.

I, along with a core group of friends, have hunted the same island for over a quarter of a century. In each of those many days in the forest, we’ve learned a bit more about the place.  After a heavy winter kills much of the herd, we’ve seen the proliferation of ground dogwood across the forest floor, noticed the un-nibbled new growth on the berry bushes.  When fresh snow buries the succulent leaves of fine-leaf gold thread and five-leaf bramble, we’ve come to predict the tracks of deer will lead to the less-favorable but still available needles on the twigs of wind-thrown hemlock trees. And, each evening through all those years, we’ve pursued the question of how many deer reside on the island. Although we’ll never know for sure, our best guesses shape the harvest—we take less when harsh winters cull the herd and enjoy fuller freezers when deer numbers are high. 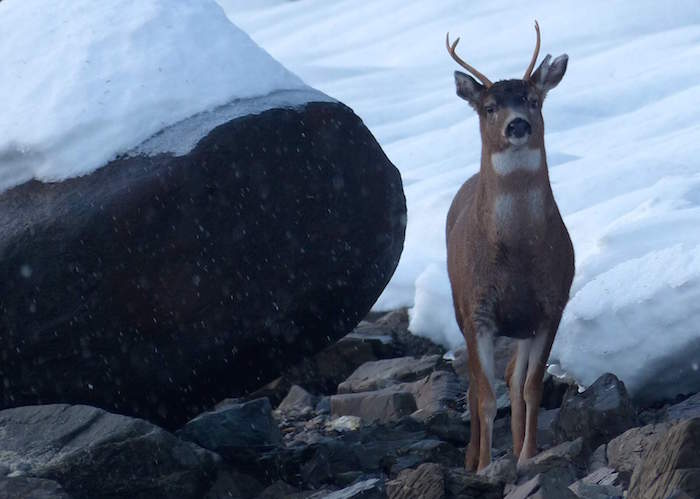 And when luck lines up and a deer appears close and still, the quiet calm of hunting transforms to the strain and sweat of the harvest. A southeast Alaska buck is about all the weight a single person cares to move. With a rope tethered to antlers, we drag the deer back to the cabin, arriving with exhausted arms and sweat-damped hair, despite the winter cold.

At the end of each of season, we load the hides and heads of harvested deer onto sleds and pull them back to a quiet circle of trees beyond the sight and sound of the cabin. We place the fresh remains atop the scattered hair and bones of the previous year’s deer. It is there, in the boneyard, between still trees and drifting snow, that we pause to make sense of the messiness of the hunt, to contemplate the power of a piece of lead zipping through the forest with bone-shattering, lung-tearing precision. Last fall, the tight group of friends gathered round the bones ranged from the rounded cheeks of a three-year-old to the creased features of a hunter sixty years his senior. Looking at the familiar faces of family and friends, all nourished by the flesh of deer, it’s easy to see these people as every bit as beautiful as the deer. And here lies the genius of the hunt, the insight that humans are no less beautiful, no less a part of the stunningly intricate and gorgeous and vibrant forest than the deer themselves. 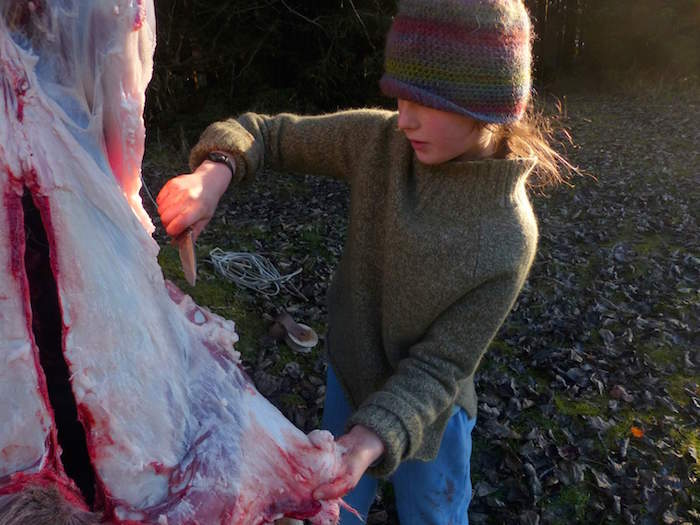 In turn, each person from mother to child to father, share their thoughts with the forest and friends. Often there is a sad remembrance of hunters no longer with us. At times there’s regret expressed for a poorly placed shot, an animal’s undue suffering. Always there are words of gratitude for each other, for the island and for the deer that, with their life, give all we need to be fully human: calories, caring, commitment and community with each other and the Earth that gives us life.

Like a clam in mud, Hank Lentfer is happily embedded in his creek-side home in the rainforest of Southeast Alaska. Also like a clam in mud, Lentfer gets grumpy when pried away from the comforts of home. During winter, when morning and afternoon get really close together and the animals aren’t making too much noise and the weather is lousy, he sometimes writes.

On Wanting to Eat the City Deer

Hunting as Humanizer: Then and Now