While hunting in the remote Tatshenshini Provincial Park along the British Columbia–Yukon border, my friend Bill discovered the headless but mostly well-preserved remains of a fellow hunter, frozen for more than 550 years, who had been exposed at the foot of a melting glacier. “Kwaday Dan Sinchi,” he is called by First Nations people, “Long Ago Person Found.” His clothes were made from the skins of 100 ground squirrels. He carried dried salmon, a medicine bag and hunting tools. He likely fell into an ice crevice and froze to death. Fortunately Bill didn’t suffer the same fate, but if he did, would another hunter find him 550 years or more from now? Unfortunately few places remain as wild as the Tatshenshini, where humans can hunt as Bill and Kwaday have.

The “hunting hypothesis” of evolution suggests that hunting literally made us human in the sense that the development of tools and capabilities to kill for meat and defend against predators allowed our early ancestors to wander from the safety of trees, expand far and wide, and eventually start walking upright. Scholars debate the details, but I feel no need for evidence. I know I am a hunter and always will be. As Chief Sitting Bull of the Hunkpapa Lakota Sioux said, “When the buffalo are gone, we will hunt mice, for we are hunters.”

I was born a hunter, just as I was born gay. The two elements of my life are intricately woven together through nature and nurture and anchor me to my wild roots.

I particularly love elk. I spend all the time I can in elk country around my home in Montana, year-round, hiking, backpacking, and snowshoeing, observing and admiring elk. And each fall, I head into elk country with the intent to kill one. I like to think I’m a vegetarian of sorts, living off the wild grasses, sedges, and forbs that grow near my home. Most of these plants are not palatable to humans, so I let elk convert them to protein for me. Perhaps someday I shall travel through the digestive system of a grizzly and fertilize the vegetation elk eat: Seems only fair considering all the elk I’ve killed and eaten.

In his essay, “A Hunter’s Heart,” Colorado naturalist and writer David Petersen summarizes it nicely:

Why do I hunt? It’s a lot to think about, and I think about it a lot. I hunt to acknowledge my evolutionary roots, millennia deep, as a predatory omnivore. To participate actively in the bedrock workings of nature. For the atavistic challenge of doing it well with an absolute minimum of technological assistance. To learn the lessons, about nature and myself, that only hunting can teach. To accept personal responsibilities for at least some of the deaths that nourish my life. For the glimpse it offers into a wildness we can hardly imagine. Because it provides the closet thing I've known to a spiritual experience. I hunt because it enriches my life and because I can't help myself … because I was born with a hunter’s heart.

From a young age, I found comfort being alone in wild places. Once, during a ten-week solo backpack trip, I watched a sow grizzly and her two cubs 100-yards or so upwind of me. She was lying down, resting, keeping watch of her young ones as they wrestled, rolled, and chased each other in the grass. The cubs ran and pounced on their mom a few times, and she nudged them away with her snout. When one cub tried to suckle her, she swatted the youngster with her powerful paw and sent the startled cub rolling. Then she got up, walked over, and reassuringly licked the cub until all seemed well in the world.

Then it struck me: I had spent so much time alone in the wilds because in the wilds I could truly be myself. In nature there are no societal-created norms, judgments, and expectations. Everything is what it is. A grizzly might judge me as a threat or feast but doesn’t care who I fall in love with and sleep with. I was drawn to the wildness and freedom of wild grizzlies while denying and suppressing my own wildness and freedom. Like the grizzlies, I am what I am. I accepted myself that day while watching those magnificent and tenacious animals. In a real way, those bears helped save my life. 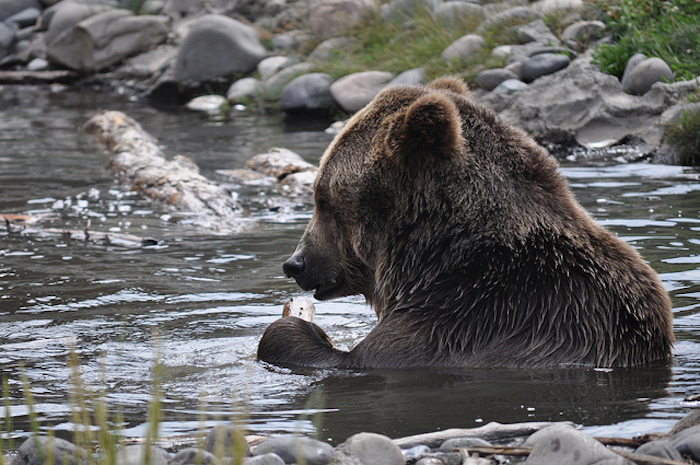 Henry David Thoreau wrote, “In wildness is the preservation of the world.” Wildlife and wild places preserve the truth of reality, of life and death, and of our primeval connection to this Earth. To deny that is to deny ourselves; to destroy it is self-destruction. To embrace, understand, and accept it is to embrace, understand, and accept our own innate nature and wildness.

But to think that hunting from an all-terrain vehicle (ATV) armed with high-power rifles, scopes, and other technology resembles our hunting ancestors is akin to thinking that an arsenal of modern semi-automatic weapons resembles our colonial Patriots armed with muskets—and somehow equivalently needed to launch a Tea-Party-like rebellion against the improbable event that our government (armed with aircraft carriers, fighter jets, tanks, drones and nuclear warheads) turns against us. We hang onto the past without grasping today’s differences. As Aldo Leopold once put it, “Our tools are better than we are, and grow better faster than we do. They suffice to crack the atom, to command the tides, but they do not suffice for the oldest task in human history, to live on a piece of land without spoiling it.”

We apply space-age technology to a stone-aged pursuit.

We hunters raise money to fund state fish and game departments overseen by politically appointed commissions (made of mostly of ranchers and hunters) who too often pressure agencies to lead us away from wildlife management to something more resembling animal husbandry, with a focus on producing more elk and deer for hunters to shoot. The good news is that many hunters rally around efforts to protect what little remains of our wild places, which benefits all species—including non-hunted species and fellow predators such as mountain lions, grizzlies, and wolves. But it seems a lot more hunters want roads and ATV trails punched into our wilds; want wolves killed off because they think they’re killing all “their” deer and elk; fight against efforts to protect the wild places that sustain the wildlife we hunt; and deny the human-caused changes in climate that melts glaciers and exposes ancient hunters. Most modern-day hunters are as detached from nature as the rest of society, and so we naively, ignorantly, and sometimes maliciously kill what sustains us.

And that, too, is part of being human.

Hunting is a significant ingredient to what made and makes us human. It is also, in large part, why hunting exposes all aspects of human nature—the good, the bad, and the ugly.

A hunter, angler, writer, activist, and former Force Recon Marine, David Stalling earned degrees in wildlife and journalism at the University of Montana before working most of his career in the nonprofit wildlife conservation profession fighting to protect wildlife and wild places. He spends much of his free time roaming the wilds around his home in Missoula, Montana.

Stephen Bodio
How is nature critical to a 21st century urban ethic?

Hunting as Humanizer: Then and Now