In the first month of his 66th year, my father wrestled a wild turkey with his bare hands. He had previously shot it, in the neck but imperfectly—the gobbler refused to fall. Instead, the turkey stumbled into a thicket, and my father gave chase. When the bird scrambled across a drainage ditch, my father faced, in his words, an existential decision: let the old (and wounded) gobbler go—saving his own creaky body and “balky” knee—or press on across the ditch, the depths of which were unknown.

Heeding a call from deep within, my father followed the gobbler, wading through hip-high water. He caught up with the bird on the other side and with his last two shells tried to dispatch him, to no avail. The turkey flapped off into the brambles. Catching up again, he got his boot on the turkey’s neck and tried hitting the bird’s head with his shotgun; all that did was break the stock of his double-barreled gun, which he had carried since his freshman year of college. The turkey again escaped, this time stumbling back into the ditch. So my father, too, returned to the murky waters, where he finally understood what he’d have to do. He held the gobbler’s head under until the powerful wings ceased flapping.

I first heard this story not long after my father returned home from a week at Ashepoo, our family hunting property an hour southwest of Charleston, South Carolina, and I cringed—both at the details and the dark humor with which my father told it. But I was surprised by neither, so I simply put the image of my semi-old dad wrestling a semi-old gobbler out of my head and went on with my busy life. At that point, it involved what seemed then far more important preoccupations: surviving my first year of law school and planning my wedding—to be held the following October at Ashepoo, in a large field not far from the old gobbler showdown. 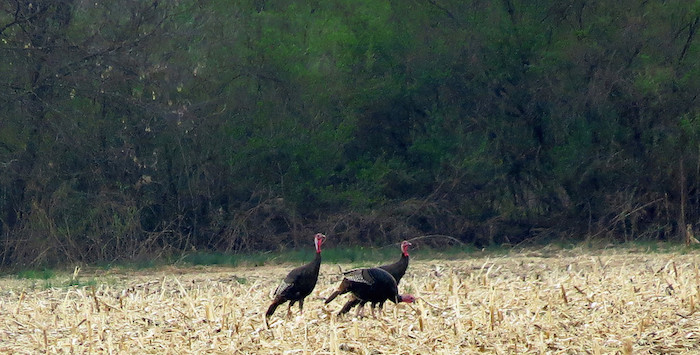 Six months later, two weeks before my wedding, my father was diagnosed with stage IV stomach cancer. Six months after that, chemo having failed, he was sent home from Sloan-Kettering on hospice care. We were told he might only have three weeks left, but he hung on for three months. In those three months, while my sisters and mother and I found ourselves paralyzed by the imminence of death, my dad—much like the old gobbler—resisted mortality by pressing on. He tackled a project long deferred, assembling his life’s work—articles, book chapters, personal nature essays—into a manuscript.

Among those essays was “Wild Turkeys and Old Gobblers.” After telling his tale, my father asked:

[W]hat possessed me to go into the bramble patch and the ditch in the first place? Some character flaw or strength? Something from my personal past? Something deeper, more primordial and aboriginal, brewed up in evolutionary, ecological time and space? Or some deep, almost personal affinity between me and the old gobbler, each acting out inevitable stages in our lives? After all, in the thicket of thorns and the ditch, we did get to know one other intimately. Who was the wild turkey and who the old gobbler: him, me, or both of us?

Ignoramus. I do not know the answers to my own questions. I will continue to ponder them in my heart, without really expecting to happen upon any final insights. Yet, I am glad that I did spot the fanned tail up against the brambles across the open field. For better or worse, the ensuing wild dance of death has become an ongoing, if not permanent, part of myself.

I don’t know whether my dad wrote this essay before or after learning of his own fatal wound; I suspect it was before, which renders his words prophetic. No matter—I do know that the wild dance of death with this last gobbler, and many before him, and with various ducks and dove and quail, prepared my father to face his own mortality with a kind of grace and equanimity that was the most powerful demonstration of humanity I have ever witnessed. Hunting brought my father face to face with an inner wildness that allowed him to truly see himself, and all humans, as part of nature: privileged by its aching beauty, but always subject to its callous whims.

This insight had important consequences in the trajectory of my father’s life. The wildness that my father felt kindled in turkey woods was less about a basic desire to kill (which he acknowledged with honesty and ambivalence), and more about being an unmediated participant in nature, on its own terms. In our Anthropocene world, where many experience nature as a virtual reality, anthropomorphizing wild animals and projecting human values onto nature’s inevitable processes, my dad instead humbled himself in the presence of true wildness. Hunting was his active entrée into nature’s classroom. There he looked to turkeys, and all wild creatures, to teach him something about the big questions: what it means to live a good life; what it means to meet a good death.

That sometimes death was at his own hands—in the gobbler’s case, quite literally—was something my father could live with, so long as he did everything he could to ensure that the life taken had been a good one. Like many hunters, this meant ardent conservation of species habitat for the animals he hunted (and many he didn’t). But for my father, it also meant devoting his life to developing an ethic of human responsibility to all of nature. My dad honored the old gobbler, and every other bird whose life he took, by weaving their stories into a philosophy of life that implores us all to radically reconsider the way we think about, and treat, the natural world.

I am myself indebted to the old gobbler in the ditch, and countless other animals that touched the depths of my father’s soul and inspired him to do the work he did. That work is what I have left of him to share with my children. I hope they, like I, take from it deep ideas about wildness, what it means to be part of nature, and what it means to be human. And I hope my father’s stories inspire my children to become thoughtful hunters themselves, full of a complex love for the natural world that transforms them from killers to defenders of wildlife, wild places, and the wildness within the human soul.

I will not be much help in that effort—I do not hunt. But my children’s father, the man I married in that Ashepoo field, does. To him, on the eve of our wedding, my father made a fitting toast: “To wild turkeys, young and old, human and other.” I am ever grateful for all the wild turkeys in my life and for the complicated tradition that keeps them there.

Since her father Strachan Donnelley's death in 2008, Ceara Donnelley has been committed to carrying forward his work and legacy. She has done so as Vice Chair and Strategic Counsel of the Center for Humans and Nature, the non-profit Strachan founded to explore and promote human responsibilities to nature, and as co-editor of Frog Pond Philosophy, a compendium of Strachan's best writing and thinking that was published in 2018 by the University Press of Kentucky.