The global frontier of fracking and unconventional oil and gas extraction brings high-crisis for human rights but also opportunities for change. The extreme method blasts millions of litres of water and undisclosed toxic chemicals underground with intense pressure to fracture subterranean rock.[1] More than 270,000 wells have been fracked in the US and the world. More than 10 million Americans live within a mile of a fracking site.[2]

Beyond its proven devastating toxic environmental effects (dire water, land and air climate change causing contamination), this “most controversial industrial activity of our time” is an unprecedented global threat to the intertwined complex of universal human rights.[3, 4] Humans require a healthy environment for a fulfilling and dignified life, for the ability to achieve self-realisation and community harmony. 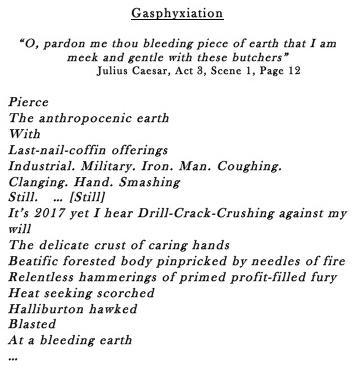 Fracking engages the profiteering might of the industrial military complex, companies such as Dick Cheney’s Halliburton, whose conduct from the US to Australia is rupturing the very socio-cultural fabric of our democratic social-cultural commons—the collective good, a place we like to call home. Historic boundaries delineated by law have been uprooted and challenged by the dash to frack. It has exposed the profound frailties of our political institutions meant to regulate industry and protect human health and environment. Tales abound of silencing landholders, bullying whistle blowers, and the secrecy and self-regulation of the industry. It’s Dracula in charge of the Franken-bank!

Fracking signifies the tragedy and promise of the dusk of an era: a last ditch rapacious land-rush of a plummeting fossil-foolish paradigm and its last desperate glutton-clutch for power: political power, energy policy power, private profit power. Yet of course, the counter—People Power, and human rights—may indeed win the day.

A Brief Schematic of the Right-ful Human

Conceptualizations of human rights have existed for many centuries in the threaded theatres of the world’s theologies. Another historic source is the common law, rules and principles established by judges on case-by-case through the centuries. Of course, “the world’s first bill of rights,” the 1215 Magna Carta, is another which ultimately informed international human rights law. 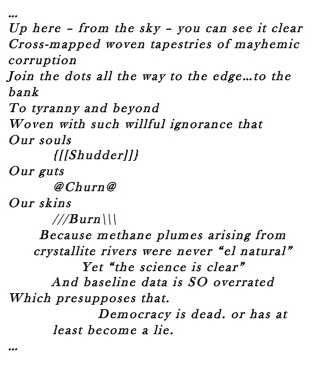 Human rights came into their own, in an official, universal, and (international) legal context, as a fierce phoenix arising from the Holocaust-horrors of WWII. Humanity’s worst failings informed its most divine aspirations. The 1948 Universal Declaration of Human Rights(UDHR)was drafted by an eclectic ensemble of multicultural philosophers, diplomats, and jurists, who borrowed from history’s (r)evolutionary revelations.

The UDHR represents an unprecedented international consensus of human civilization’s aspirations for individual and collective well-being—the blueprint for an architecture of dignity, tolerance, and inclusive plurality among the multi- racial/ethnic/cultural/political/sex/gender/ability/indigenous kaleidoscopic expressions of humanity. 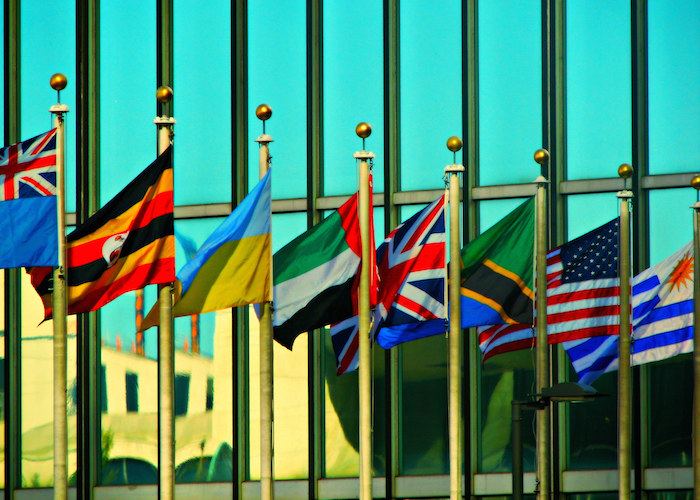 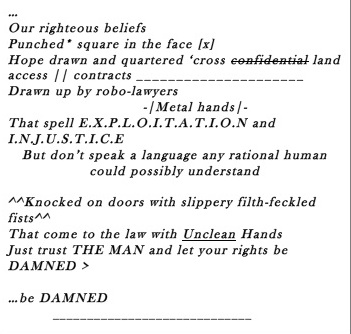 The UDHR is an oceanic sky from which many rivers of IHLR instruments, conventions, treaties, and declarations have rained down a torrent of civil, political, social, economic, and cultural rights. Unconstrained by borders, the UDHR has been translated into more than 500 languages, bridging together the spherical alphabet of humankind, Abkhaz to Zulu. However, the onset of fracking fever is forcing us to question these basic benchmarks, to revisit the weaving thread that binds our way of life’s righteous social fabric.

Perhaps the glue needs replacing? Perhaps we need to reweave the threads? Or rethread the weave?

Frack fever is enabled by a perfect storm of: the disproportionate political power of the energy lobby; the frail corruptibility of political regulation; and a lacuna of scientific evidence to demonstrate how harmful fracking is. Fracking spotlights the glaring inadequacies of our centuries-old legal systems and has seen a remarkable phenomenon of corporate might, with wanton disregard for our democratic foundations, plundering the most sacred creeds of capitalism: private property and the common law right to the quiet enjoyment of it without arbitrary interference. 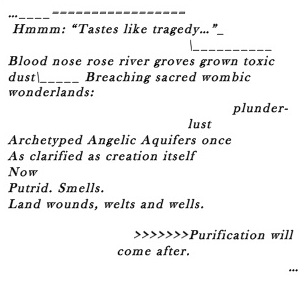 The industry’s unlawful rapacious nature was ordained in George W. Bush’s passage of the Energy Policy Act 2005 which exempted fracking from the Safe Drinking Water Act 1974 and the Clean Water Act 1972 (aka “the Halliburton Loophole”—Cheney was chuffed although perhaps he should be cuffed?). More recently, the UK government has even attempted to dilute the ancient law of trespass so companies can frack under people’s homes without consent.

As history has relentlessly shown, humanity adapts and fights back. In Australia, the indiscriminate frack-frenzy has even stepped on the Tory toes of politically conservative farmers thereby invoking an unprecedented civil disobedient mobilisation. The Lock the Gate Alliance emerged as a clarion call to physically bar land access on pain of criminal prosecution.[5] More than 40,000 landholders have joined the movement.

In March 2016, the Sisters of Mercy, delivered a joint statement with Australian landholders at the United Nations Human Rights Council, addressed to UN Special Rapporteur on Human Rights and the Environment, stating, “from Australia to the US to Argentina, our communities report violations related to the right to a safe, clean, healthy, and sustainable environment.”[6, 7, 8] In late 2016, the UN Special Rapporteur on the situation of Human Rights Defenders visited Australia and met with anti-frack campaigners and condemned "anti-protest legislation" targeted at environmental activists, which would contravene Australia's international obligations.[9, 10]

There is also a movement for ecocide to be added to the 1998 Rome Statute of the International Criminal Court.[11] Separately, in September 2016, the International Criminal Court Chief Prosecutor issued a policy paper widening the courts remit to focus on environmental crimes.[12, 13] Further action has been taken in the courtrooms of the world but mostly gaining little fruit as anthropocentric legal systems are increasingly proving impotent to the challenges of vast environment destruction. Thus, in 2017, the international Permanent Peoples’ Tribunal will be holding a session and global investigations on the human rights dimensions of hydraulic fracturing and other unconventional fossil fuel extraction processes:

Business-as-usual has a terrible power. People must stand up and… speak for those who have no voices at all—future generations of people, plants, and animals, all the young and hopeful ones. They are the ones who will pay the price of hydraulic fracturing…in the sizzling, degraded world the fossil-fuel industry will leave behind.[14]

So watch this space.

These views are the author's own and do not reflect the opinion of Australian Lawyers for Human Rights (ALHR) or Anderson Fredericks Turner Lawyers & Advocates.

[1] Hauter, W. (2015 August 13). How Dick Cheney Kicked off an Era of Cancer Clusters and Eco-Disasters from Fracking. Alternet. Retrieved from http://www.alternet.org/environment/10-years-later-fracking-and-halliburton-loophole.

[3] Loki, R. (2015 April 28). 8 Dangerous Side Effects of Fracking That the Industry Doesn't Want You to Hear About. Alternet. Retrieved from http://www.alternet.org/environment/8-dangerous-side-effects-fracking-industry-doesnt-want-you-hear-about.

[4] The Centre for Human Rights and Environment. (2015 September 29). Human Rights and the Business of Fracking: Applying the UN Guiding Principles on Business and Human Rights to Hydraulic Fracturing. Retrieved from http://www.ohchr.org/Documents/Issues/Business/ForumSession4/FrackingAndUNGPs.pdf.

[14] Moore, K.D. (2015 November 18). Fracking Goes on Trial for Human Rights Violations - The respected judges of the Peoples’ Permanent Tribunal will collect the facts and reach a precedent-setting decision. Retrieved from http://www.alternet.org/fracking/fracking-goes-trial-human-rights-violations.

Benedict Coyne is the national President of Australian Lawyers for Human Rights (ALHR) and a human rights lawyer and advocate based at law firm Anderson Fredericks Turner in Brisbane, Australia. ALHR is a national organisation of Australian solicitors, barristers, academics, judicial officers, and law students who promote the protection of international human rights standards in Australia.

Fracking May Not Violate Human Rights, but That Doesn’t Get Us Off the Hook