One of the many lessons I have learned in my first month of chicken farming is that I am easily outwitted by chickens.

For example, all four of my young hens can easily fly the coop—which is another valuable lesson, the phrase itself, so literally true. Here I have spent my entirely urban lifetime thinking “fly the coop” means to escape; now I know it means you can devote hours and hours to fencing in your hens with chicken wire, mesh, siding, more chicken wire and more mesh—and still your hens get out and either cluck, cluck, cluck all over your garden or else stay right outside the perimeter you have tried and failed to reinforce, looking at you as though you are not really there.

For these four golden-brown-browner-brownest hens, it’s either pecking, nesting, clucking, ruffling, fluttering, roosting, brooding, pooping, or nothing. It is not blankness or stupidity you see in a chicken’s eye. It is single-minded focus, which I patently lack and which currently gives them the edge when it comes to outwitting me.

Yet every day I get closer to being smart enough for them. I have come to understand, for example, that to be “chicken”—as in afraid—does not refer to a chicken’s lack of courage. It means being afraid to fight a chicken, who is formidable in her own very specific and resolute way. I learned this from my dog Chip, who sometimes helps me get them back in the coop at night by barking, a skill at which he is a true champ. He will also occasionally flush them out of a bush, for which he gets to sleep on a pillow in the bedroom after years of being banished to the garage. He deserves this major upgrade because he is now a working dog, even though he also sometimes flat out runs away, overwhelmed by the fluttering of the squat-beaked beasts with feathers.

In those precious moment when my little doggie shows exactly what it means to be chicken, I feel enveloped by a beam of etymological insight, like when a knight is traversing a forest and a single ray of light bursts through the treetops to illuminate the true meaning of gallantry. And just as Sir Gawain shall never turn away from the challenge of the Green Knight, neither will I back down from this battle of wits with chickens. On the contrary, I am just getting started. 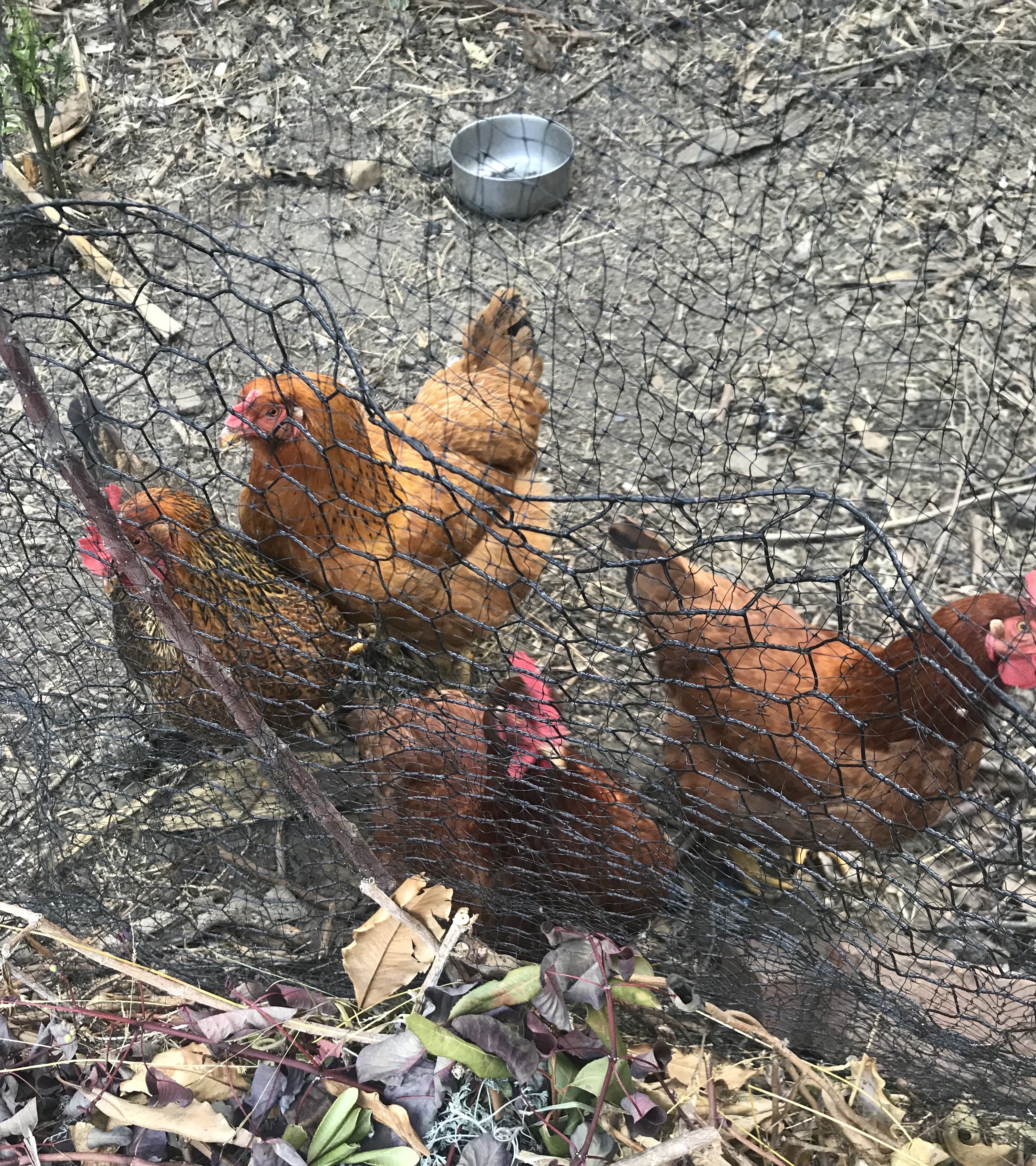 My favorite of all chicken barriers is mesh: seemingly infinite folds of black plastic webbing that sticks to things you yourself didn’t even register as being there, like the buttons on the cuff of the long-sleeve shirt you are wisely wearing while gardening. The sheer stickiness of mesh has led or misled me to feel undue confidence. Sometimes I merely shove the mesh deep into a bush, on the logic that if I have trouble extricating myself when a button gets caught, think of how the mesh will stick to all the nubbins and twiglets within the bush.

I imagine chickens on the inside and potential predators on the outside tangling with the web of mesh, getting caught, getting frustrated, giving up. I also think A LOT about the Three Little Pigs and how right now I am definitely at House of Straw level. Start where they’re at, that’s the teacher’s credo, and I’m a teacher, so it’s a physician-heal-thyself situation except with learning. I would build a brick henhouse if I could, but I only have six bricks, which I use to prop up the water bowl though the chickens continue to topple it.

Frankly, I wouldn’t mind the hens free-ranging if wild animals weren’t so audacious now that there are fewer cars on the roads. This is why I feel compelled to protect the hens from their own curious and free-ranging natures. Also, the air is cleaner—hello there, I’m a voice from the future, noting that I wrote most of this essay before fires enveloped the West Coast. I am here to make a few revisions; ideally you won’t notice me and, with that in mind, I return you to the essay-in-progress—giving them greater lung capacity and stamina. And, of course, they can smell human fear. For example, Timothy the Squirrel darts in and out of our kitchen, nabbing cat food. That’s unsettling. It would be a sign of the apocalypse were the apocalypse not already upon us.

To me, all squirrels are named Timothy, one among many instances of animal prejudice I need to reckon with as part of an overall realignment of myself and nature. It can’t be Me versus Nature anymore. Human arrogance in general has got to go. This was obvious in the pre-COVID times and now is being trumpeted with every birdsong in the birdsong-intensive soundscape and lofted with every puffy-then-wispy-then-puffy-again cloud in the bluer-than-ever sky.

Step One of rectifying my prejudice and discrimination against nature could indeed be allowing Lucky, Clucky, Plucky, and Kentucky free range. I would do that if I didn’t feel sure that a hawk will dive straight down out of that bluer-than-ever sky and carry one or more of my emotional support chickens away. I could do without their eggs—they haven’t even laid any eggs yet, that’s how young they are—but I would be hard-pressed to replace the emotional support I get from having these hens to protect, however feebly. 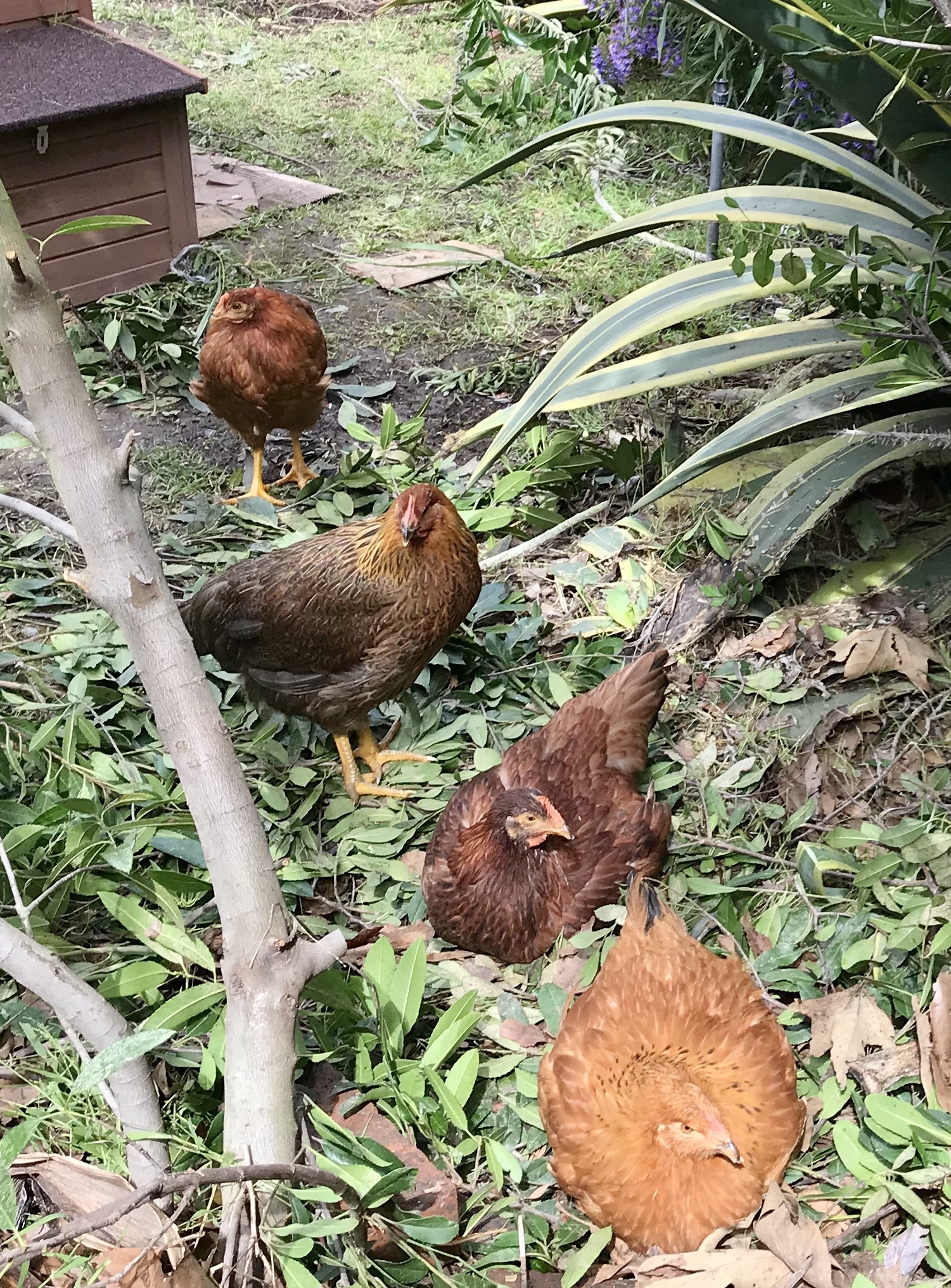 I’m invested in these particular feathered friends. Plucky—always the first or last one out, brown-feathered, her comb the color of orange soda diluted by melted ice. Lucky—exactly like Plucky but not so willing to stick out her neck with its redder, more fresh-on-the-vine strawberry comb. Clucky is resplendent in her gold and brown collar, and Kentucky is pure gold and, of all these plump poultry, the plumpest.

We’ve been in this thing together ever since I let them out of the cardboard box I got on the down-low from a guy in Westminster and built them their own coop from a kit I bought from the very first person I met with knuckles bleeding because her skin had dried out so much from washing her hands to fend off the virus. My own handiwork in constructing the coop impressed my wife, so that was a plus, but between you and me, this coop is f-l-i-m-s-y. Do not touch it with any finger other than your pinky. It is made of what appears to be cedar-color-painted balsa wood. If foxes make a comeback in this part of the world—on the west side of Los Angeles—near, now that I think of it, what used to be called the Fox Hills Mall… 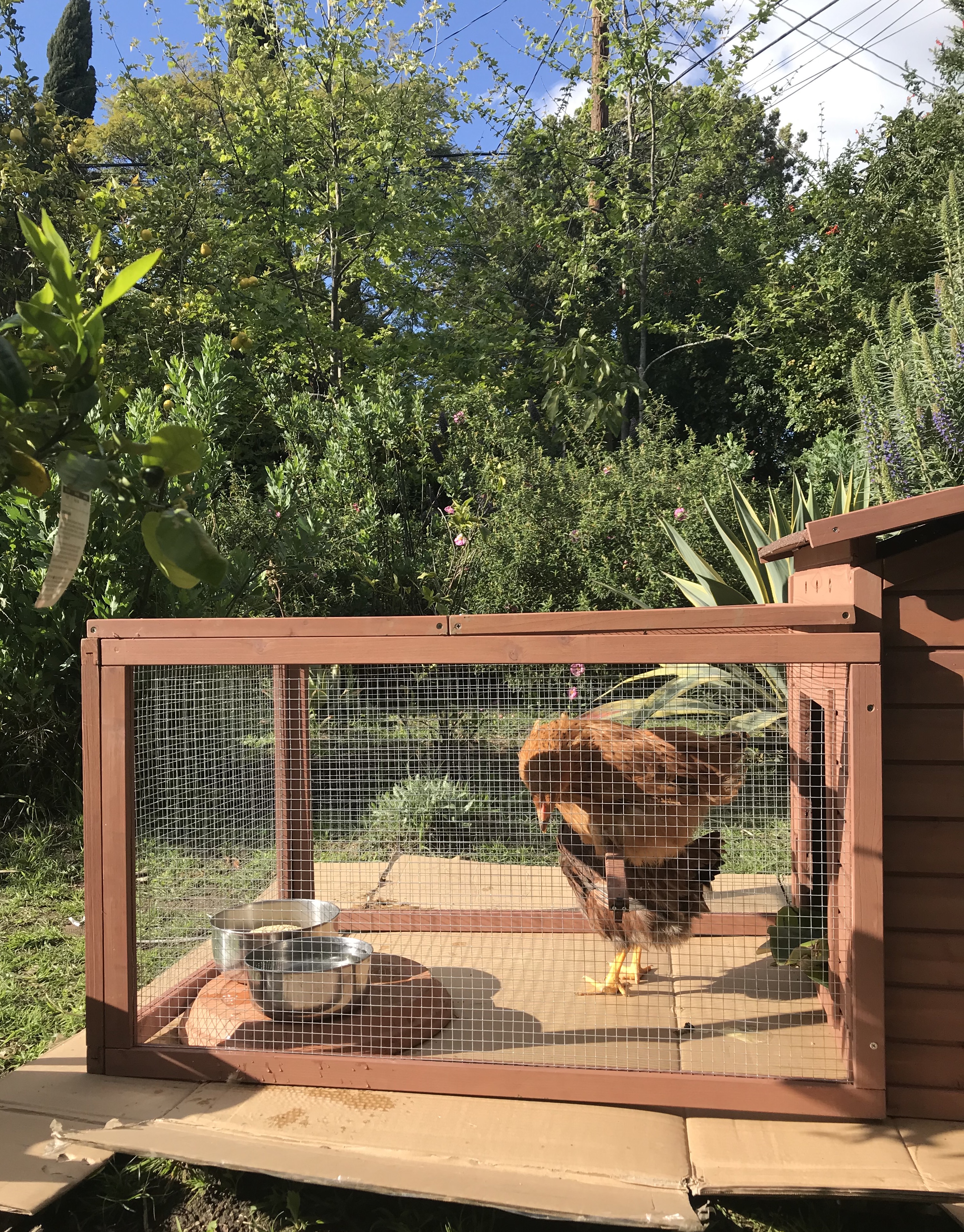 Yikes. As in gulp. As in, I hear my heart pounding. I really don’t want to experience fox-in-henhouse carnage. I really want to pray, Dear God, please don’t let foxes or any other emboldened critters eat my chickens and leave unwrapped capillaries and drifting dander left over to show me what’s what. Let me harvest their eggs for four years and then when they’re done with a privileged lifetime, I’ll make BBQ and chicken soup out of them, I promise.

This is further discrimination, of course: Why should I be the one who gets to eat my chickens and not a fox or raccoon or hawk? I really don’t have a convincing answer. I am philosophically outwitted along with being the butt of chicken-induced physical slapstick, chasing Plucky around and around a bush.

A solution might be just to let them free. I keep coming around to this, I know, but this time it might stick. I am writing a few days later, after realizing that I have been feeding my chickens dog food for two days. Long story. Big picture of a chicken on the bag. I have other excuses, none exculpatory. Let’s just stipulate that two days ago I noticed they didn’t like the little pellets and then, yesterday, I noticed “Chicken is the main ingredient” in tiny little type on the bag. I gagged a little, then rustled up some corn meal from the freezer and some kasha from the back of the cupboard. They set to pecking right away inside their coop. Hooray! I headed off to dinner with my wife, ready to beer and ice cream my worries away, after which just this one little sub-worry still lingered: “What if buckwheat causes chickens to puff up until they explode?”

This was the irruption of long-suppressed dread first encountered in middle school, where boys in south Texas talked to each other avidly of feeding Alka-Seltzer to pelicans on the Gulf Coast so they could watch them explode. I expected to wake up this morning with exploded hen carcasses strewn about my backyard, and it wouldn’t be because of a fox; it would be because of me. Before I could bear to look, I looked up “Can chickens eat buckwheat?” on the Internet and the answer is: You bet!

They can also eat clover and rye and pretty much any cover crop, which is still 90 percent of what I’ve got growing back here. Furthermore, they will clamber over compost, aerating and fertilizing as they go. I found all this out in an article on Mother Earth News, credit where its due. This article changed everything. I’m going to re-arrange my chicken fortification today so that they can be free.

And now, writing one day later, that’s exactly what I did! The hens can range garden-wide, so long as I am out there with them. I really do not envision a hawk swooping down while I am planting grapes or transplanting pumpkins. That would be bold indeed. That would be a sign of a nature I am not prepared to encounter. I am prepared to encounter the hens pecking away, pooping away, keeping things fertilized and in balance, eventually laying eggs, and it all being good, at which point, thanks yet again to the hens, maybe I will be able to confront the climate-changed nature I am not yet prepared to encounter.

Mark Gozonsky, a frequent contributor to The Sun magazine, teaches English at Grand Arts High School in Los Angeles. In addition to chasing chickens, he has recently been tinkering with his website, Gozonsky.com.