I started to feel the absence of Bluestem roots around me when I was sitting in a basement classroom at the land-grant University of Nebraska. In that prairie place a few centuries ago a community of soil and tallgrass was tended by peoples and creatures, fed by sunlight and rain and rock. Then they were removed.

The human newcomers who broke ground there, eventually making the land into a “learning environment” for students like me, might have thought they were putting the past behind them. I grew up in a small wheat-farming town in nearby Kansas. The common sense agricultural assumptions I inherited were so normal and natural to me as to be invisible. Only later did I begin to see with a shock these inherited ideas about life as a crop growing upward and forward toward a future harvest; ideas about settling fields and extracting value and digging up the roots of any problems that stand in the way. I am in part the result of ancestral soil communities being unearthed as if they were already dead, as if they were never alive.

Then I sat in that basement classroom, and the Bluestem roots began weighing on my shoulders and tangling through my hair. Their absence became physically real to me for the first time. Feeling them was distinctly, well, unsettling. They exerted the pressure of memory. I felt the constraints of my lens upon reality begin to soften, along with the edges of my human self, into humus. I was troubled. Was this being wounded? Was this healing?

The grounds of our planet’s being have come about in part because of the movement of distant generations of plants. Biologists Linda E. Graham, Martha E. Cook, and James S. Busse explain, “The origin of terrestrial ecosystems, including the development of modern soils and their biota and emergence of terrestrial metazoan groups, depended on the previous colonization of land by the ancestors of modern land plants.”[1] 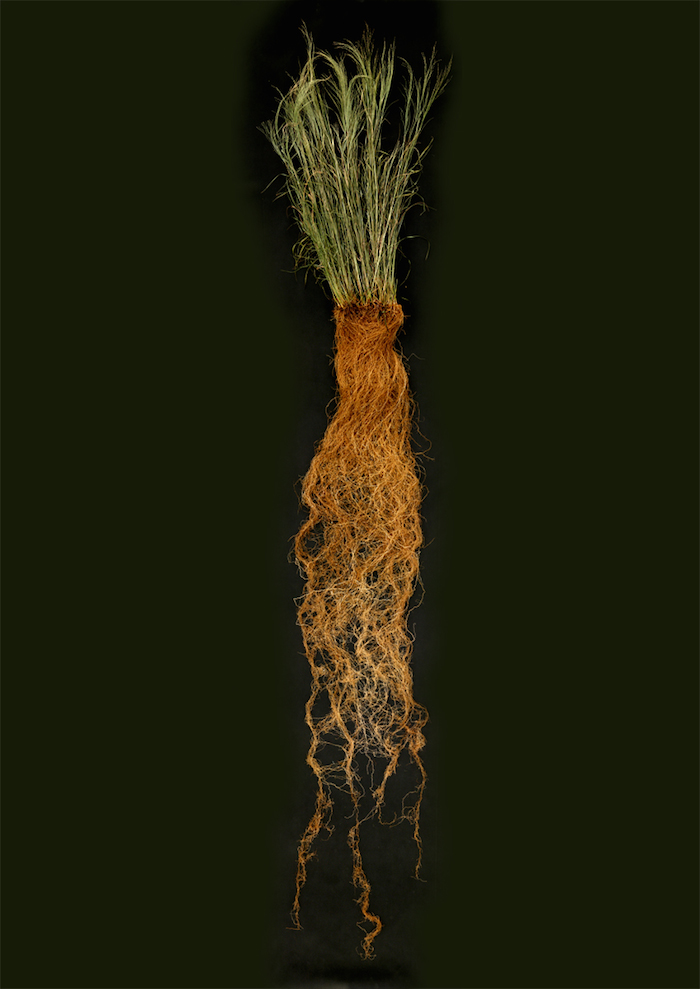 In the deep and long-standing perspective of plants, whose sensory awareness is perhaps one way the land knows us, humans evolved from tree-dwellers.[2] Only a short while ago we moved out into the grasslands and savannas. Then, just recently, we started domesticating and cultivating the seeds of grasses—rice, wheat, corn. In the perspective of plants, human history is young, and yet we’ve washed away tons of topsoils in an instant.

To me, it feels like just yesterday that the Dust Bowl blew here. Here, this pasture, in the hills near my hometown, with blades of Little Bluestem sparking green in the limestone. My grandma married my grandpa in Kansas the year that drought began. Droughts belong on these Great Plains, but from what I understand of climate models for the rest of this century, there is the chance for coming droughts and dust storms to be greater than any farmers in my family line have felt. In the pasture, watching my dad and little boy walk together, I envision the questions of weathered children. Will they look at me, at all of us, and say, “How could you, knowing?” And will I stand in front of them unable to say a word?

Several years ago, back when I was at the University of Nebraska, I became a student of Umóⁿhoⁿ íe tʰe, the Omaha language. Learning has not been an easy process, and I am far from fluent. But I have been able to collaborate on an upcoming textbook that may help carry and communicate some of their language and culture, so that Umóⁿhoⁿ children can continue to learn and live in their people’s way. The Umóⁿhoⁿ elder women speakers I know express this hope for their grandbabies and descendants, and if they want to share the gifts they were given, I want to help them.

Recently I was sitting in my new office, back home in central Kansas, editing that textbook manuscript when I read: “The word for ‘old,’ itʰóⁿthiⁿadi, breaks down to ‘in front,’ because the Umóⁿhoⁿ cultural metaphor of the past is in front, where we can see it, not behind us as in English.” I’d probably heard this before from my teachers, but now I started to feel the roots of this word actually sink in.

“Itʰóⁿthiⁿadi,” I said aloud. How long ago was itʰóⁿthiⁿadi last said here in the riparian zone along the Smoky Hill River, a river whose name in English is a literal translation of the older Umóⁿhoⁿ name? How might people mill about in this place with the past ahead in view, with memory living and shaping their common sense?[3] How might prairie roots sense paths ahead in the past, in the soil communities they interact with, to make and remake ancestral grounds?

All I can do as a writer, it seems, is to sink into the specificities of the few places and plants and peoples I know. Roots help hold me to Earth. From here, I can imagine nurturing a different inheritance for those who come next.

John Weaver, the Nebraskan ecologist who reported on the rates of Bluestem loss during the Dust Bowl, dug trenches and made monoliths to study prairie roots. An herbarium on campus displays the Little Bluestem roots that might have hung over his death bed. Haunting and beautiful, extracted and exquisitely arranged, they feel both harmed and cared for. They feel true.

Maybe what we need is a movement from the clean line of the plough into this tangle of relationship and responsibility. Maybe “creativity” is softening into the complex process of change from which any newness can emerge. Maybe putting the past in front of us will help us make a future in our home globe, our ecosphere. There is so much beyond my capacity to know. Others will judge what kind of ancestor I will be or already am. But I will continue to celebrate the plants and soils turning sunlight, rain, and rock into food. Like the Bluestem I turn and return to, I’d like to be remembered as grounded.

[2] Salmon, E. “I Want the Earth to Know Me as a Friend.” Questions for a Resilient Future: What kind of ancestor do you want to be? Retrieved 21 August 2017 from https://www.humansandnature.org/i-want-the-earth-to-know-me-as-a-friend

[3] LaDuke, W. “How to Be Better Ancestors.” Questions for a Resilient Future: What kind of ancestor do you want to be? Retrieved 21 August 2017 from https://www.humansandnature.org/how-to-be-better-ancestors

Aubrey Streit Krug earned her PhD in English and Great Plains Studies at the University of Nebraska–Lincoln. She is now a postdoctoral fellow in Ecosphere Studies at The Land Institute in Salina, Kansas.

Aya Yamamoto
What kind of ancestor do you want to be?

Winona LaDuke
What does Earth ask of us?

Robin Wall Kimmerer
What kind of ancestor do you want to be?

I Want the Earth to Know Me as a Friend