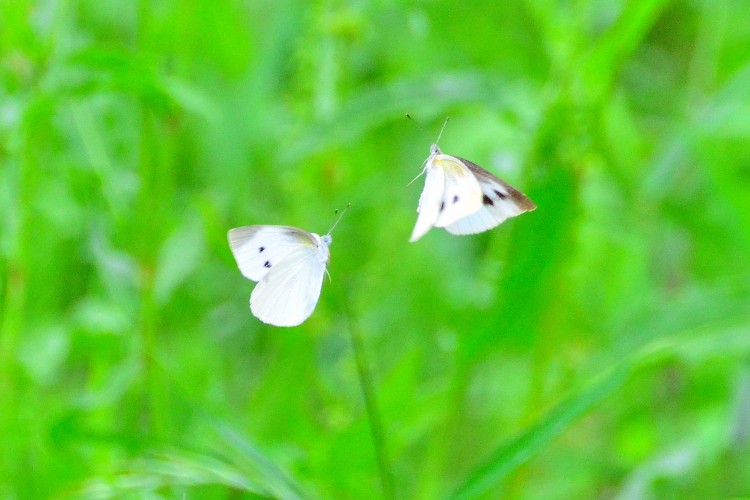 If ecological philosopher David Abram is correct to define magic as the art of changing perception, there was magic this past fall in Milwaukee’s Riverside Park.

On a brisk Sunday morning, in mid-October, a little band set forth from their rendezvous point at the front door of the Urban Ecology Center and into the park’s wooded trails. This was no simple nature walk. We were here to observe unique animal behavior rarely seen in this habitat: a site-specific dance performance offered by Daniel Burkholder/the PlayGround and entitled Scenic Routes: MKE.

We chattered amiably among ourselves as Burkholder led us under the canopy of olive-green leaves still on their way to full color. When we reached a clearing with a fallen tree and broken branches strewn about, the performance began. A man and woman, clad in earth-toned street clothes, began to methodically and somewhat playfully rearrange pieces of wood, communicating only with gestures and facial expressions. In a few minutes, they had created a fifteen-foot circle of sticks on the bare earth. This simple act of clearing a space enchanted us to companionable silence; we proceeded to the next site accompanied only by the surf-like whispering of the wind-ruffled leaves, the occasional birdcall, and the scuffling of our feet on the path. 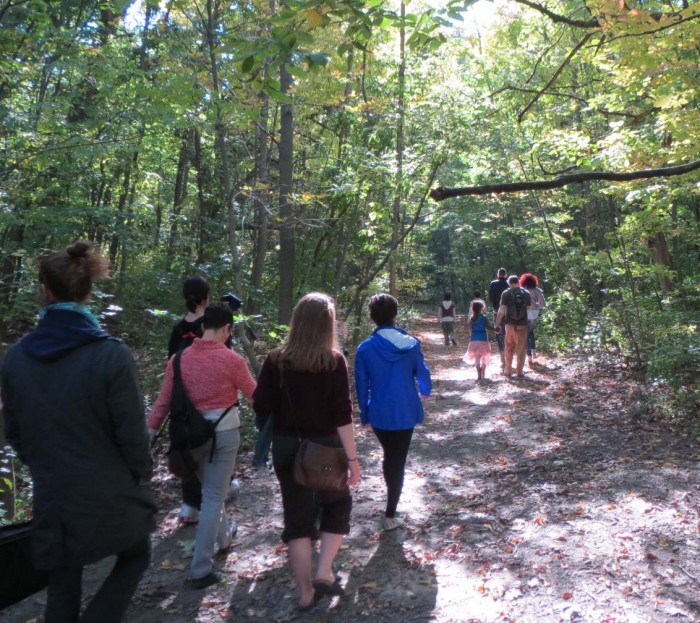 The two-hour performance led us back and forth on crisscrossing trails in the 15-acre park, stopping at this or that feature to witness a short dance. The five performers—Daniel and Andrea Burkholder, Dani Kuepper, Joseph Pitalek, and Jenni Reinke—worked mostly in pairs and trios, moving mindfully and earthily—no flashy moves or fluttering Isadora Duncan draperies here! Their gaze was often directed earthwards, but they would occasionally glance up, as if acknowledging us as simply another part of their surroundings. Without language or recognizable actions, they presented no recognizable psychology or storyline. We could sense complex personalities and relationships, but they seemed elemental, as if we were observing mysterious human animals interacting with their environment. 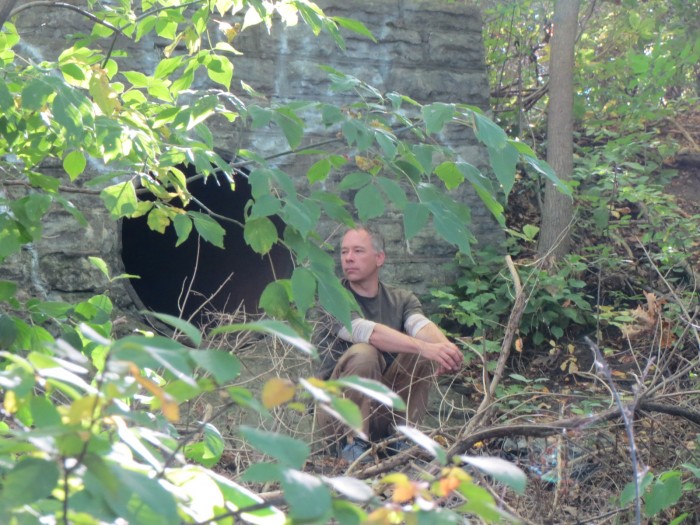 In one set piece, we saw Burkholder experimentally working his way out of a massive storm drain, like a creature emerging from hibernation. In another piece, Reinke played violin while Kuepper explored the monumental space under a traffic bridge. We saw the three women, moving slowly and contemplatively, rooted to the earth like trees; we saw Andrea Burkholder and Pitalek crawling and hopping around a massive fallen tree like a primordial couple investigating a possible shelter; and there was a gentle duet between two men, with the Milwaukee River as a sparkling backdrop. The only musical accompaniment was provided by the violin, then by a haunting flute; later, a soulful gospel solo was sung as the ensemble climbed a concrete staircase into the brilliant morning sun. 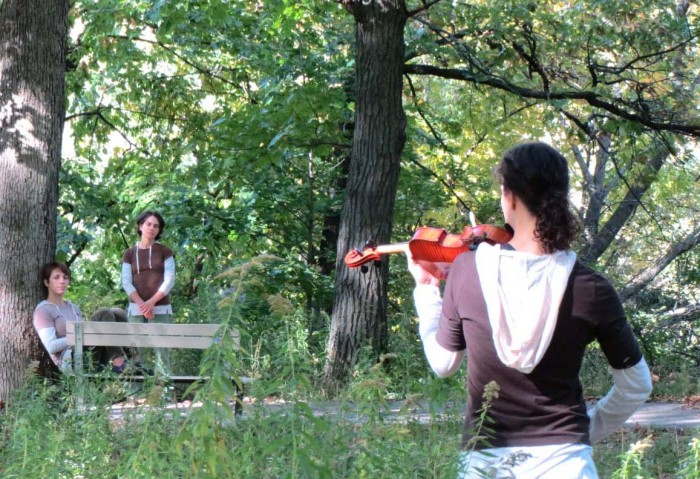 Everything seemed designed to bring us into an extraordinary relationship with the natural setting. The performers' concentration on their immediate surroundings invited us to join them in the here and now; their meditative movements gave us a soft focus without monopolizing our attention. This play between figure and ground allowed a kind of perceptual magic trick to happen: our senses expanded to include everything in the environment—the breeze on our skin, the green-gold forest light, the deep quiet space of the woods, filled with the mysterious complexity of life. This green magic got inside us somehow, haunting us long after the performance had ended. 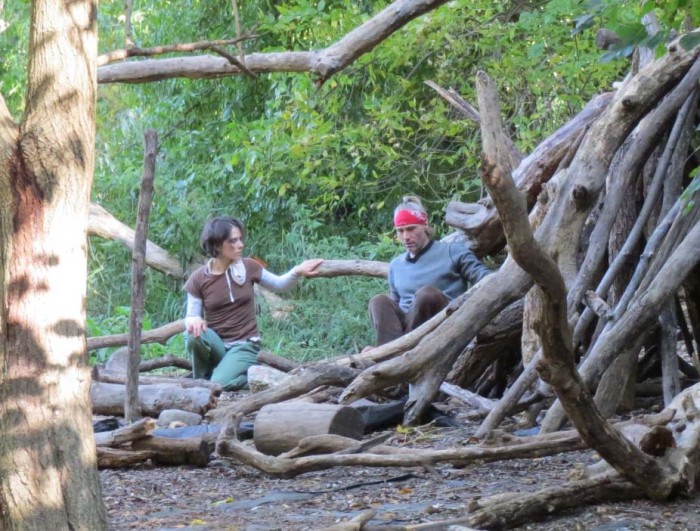 Burkholder, who teaches dance at the University of Wisconsin-Milwaukee, had previously performed versions of Scenic Routes in the Washington, D.C., area (including one performance that had to be reached by canoe). He creates his pieces by first "listening to the spaces," then improvising in them to discover what shapes, tempos, and actions they elicit. His artistic lineage is the body/improvisation-based dance style sometimes called "postmodern." He is also a certified instructor of Feldencrais Awareness through Movement, exercises that train practitioners to become conscious of very fine body perceptions. You can infer his outlook from the Krishnamurti quote posted on his UWM office wall: "The ability to observe without evaluating is the highest form of intelligence." Burkholder told me that he's attracted to the outdoors as a venue because the natural environment frees both performers and audience to experience dance with fewer layers of cultural assumptions. He would like the piece to create emotional "anchor points" for the audience, so that, when they return to the park, they have vivid memories of the experiences they had in certain places.

This open, generous performance welcomed the world to become part of the show. We could hear mothers calling to their children in the park; walkers and mountain bikers could pass through without breaking the mood. At one memorable point, a pair of fluffy white dogs stopped to check out one of the dancers, woofed once, then ran out, stage left. And in the show's grand finale—an energetic round-robin at the crown of a hill covered with prairie flowers— a flock of birds, evidently attracted by the action, swooped down directly over the dancer's heads; seconds later, a pair of white butterflies mirrored the dance in a swirling pas de deux. When I return to Riverside Park, these memories will be part of my experience of the place, and I look forward to establishing more “anchor points” when the piece is performed again in the winter, spring, and summer.

In The Practice of the Wild, Gary Snyder proposed that songs and dances were original peoples’ way of giving back to the animals for sustaining them. “Performance,” he wrote, “is currency in the deep world’s gift economy.” What a refreshing change of pace from the usual: instead of exploiting animals or wrecking their homes—we put on a show for them! Without flattering humans too much, it does seem like the least we can do.

Scenic Routes invited us into an alternative view of the relation between humans and nature; where art and the world appear as partners in a great dance. The magic was simply in getting us to slow down enough to take notice of it.