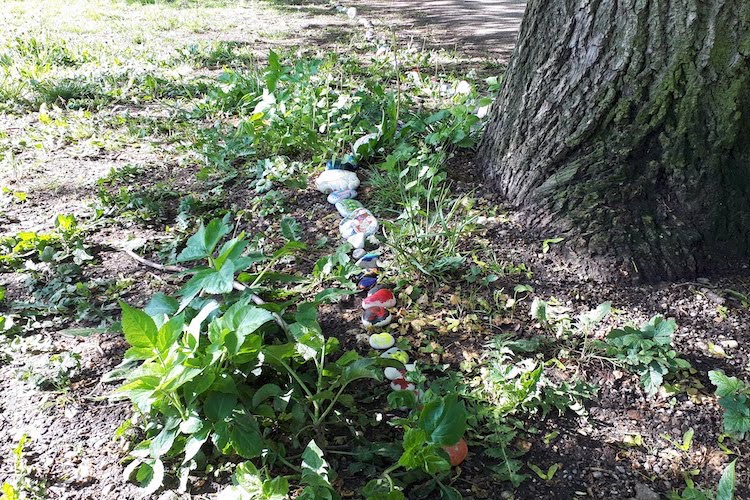 A snake is growing in the park near our home. It uncoils alongside a footpath, a little longer each day. It’s a snake of painted stones, placed alongside each other at the edge of our inner-city park during the COVID-19 lockdown. Decorated with hearts, cartoons, flags or simple streaks of color, the stones can touch, though we can’t.

Like many families, we live in a small apartment without a garden or balcony. The schools closed two months ago. Our sons, aged six and seven, have been no further than the park since then. The park is a lifeline, though one we must use with care. We go early enough in the morning that it is not yet crowded with joggers, dog-walkers, people playing badminton, and others doing yoga. 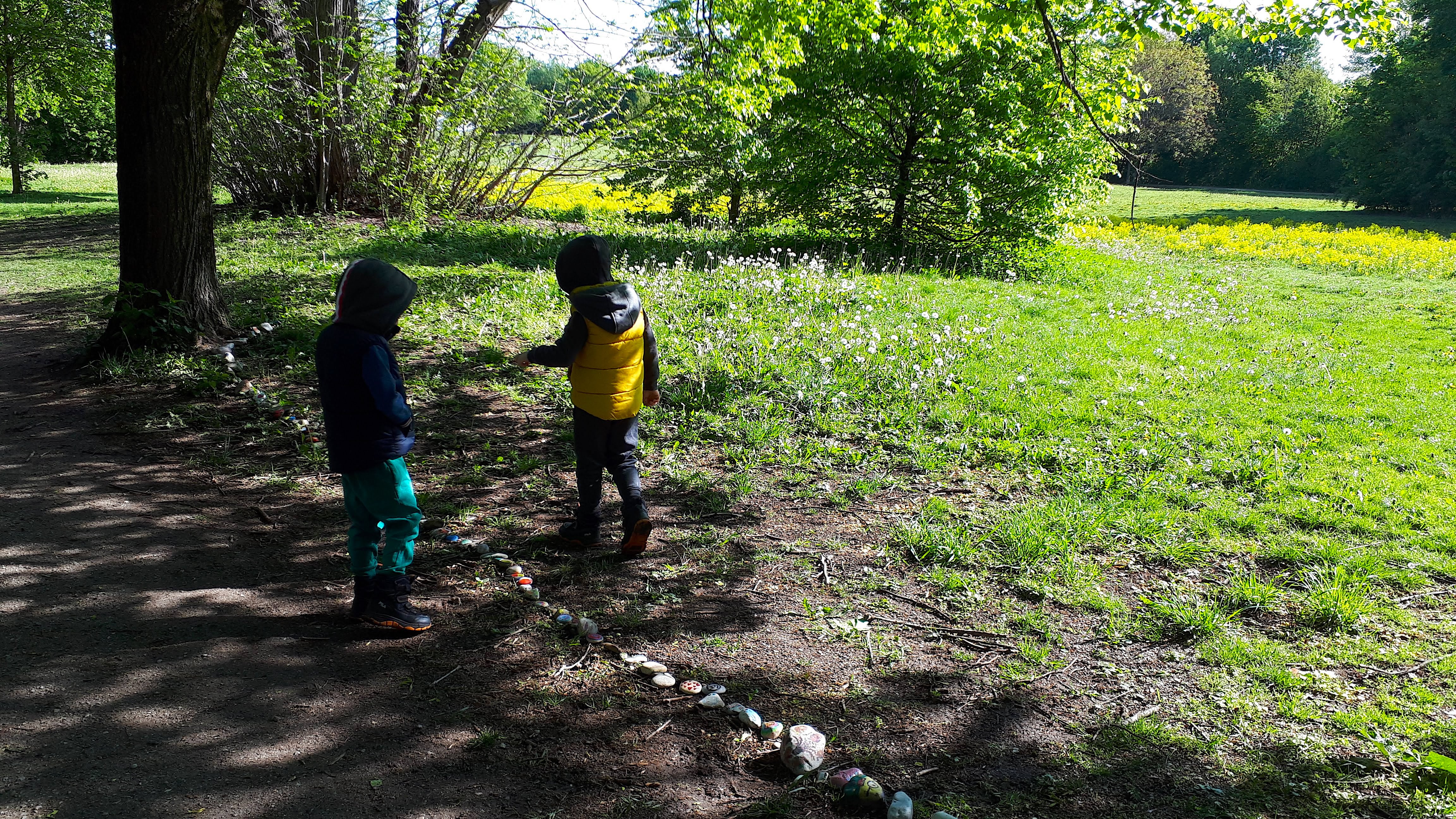 Green public space in the city has always been important. We’ve loved ours since we moved to Munich three years ago. And now parks are more important than ever: a desperately needed lung among the concrete. In our crowded street, there are no gardens or garages. Most of us don’t have cars to drive us safely to anywhere more spacious. That’s okay. We don’t all have to own a fenced space. We live in a city that makes it okay by maintaining extensive public parks in which urban nature flourishes.

In these lockdown weeks, winter wolfsbane has given over to wild garlic. Cherry and apple blossom flowered in glorious pink and white, and has since scattered. Then dandelions burst out everywhere in the brightest yellow possible, and now their seed globes dust the grasses with white. One after another, the trees have spread green leaves to the blue skies, until finally even the oaks opened to the spring. Because we visit each day, we are more tuned to the plants than before.

We notice the places where there will always be a crow strutting among the long grass. We pay a visit to the rooks’ patrol ground, to the long-tailed tits flitting in and out of their nest-box, to the hazels where a red-black squirrel might be found. We meet the more-than-human and learn many ways of being in the world.

The park is not just there for people. It is not a garden, nor a playground. The clusters of trees and slopes of long grass provide homes to diverse living beings. On the top field last spring, a strip of grass was dug up and reseeded with native wild flowers, which attracted many bees and butterflies. The meadow planting followed a petition signed here in Bavaria by 1.75 million residents asking for changes in land use to support pollinating insects. A law was subsequently passed to ensure that 10% of green space in Bavaria should be flowering meadows, rivers should be better protected from pesticides and fertilizers, and 30% of agricultural land must be organic by 2030.

At this time of year, the difference between the wildflower strip and the rest of the park is already clear, but it grows much starker in the summer when the grass is mown. By July last year, the meadow was an oasis of life and color in a desert of dried out and almost silent shorn grass. It’s a joy to see the cycle of different meadow flowers, and it prompts the question: Could more space be given to support insects and species-richness?

In discussions about the value of public green space and access to urban parks, I’ve heard much made of the benefits to people, especially improvements in mental health, child development, and economic productivity. Statistics are gathered and interpreted to convince local governments and businesses to provide money for city parks. While this is understandable, it’s also problematic. It repeats the familiar pattern of reducing other-than-human-nature to its use value to humans. In other words, it’s more taking.

Humans need to acknowledge how much we have already taken from nonhuman nature. As an example, in Germany insect populations have fallen by over 75% over the last thirty years. This is likely mainly due to insecticide use on farms. Returning 10% of green space to wildflowers is essential restitution. Generosity to wildlife should be central to how we use space today. And this will still deliver benefits to humans.

When people do something for nature, it reinforces their sense of connection to a more-than-human world. I suspect that many people enjoy being among plants, birds, and other wildlife more when they have a reciprocal relationship with nature. In other words, if you feel that you support life on earth or in your local place, love of the nonhuman flows more freely and deeply. That means that a green space that clearly supports wildlife is all the more joyous.

On the other hand, we all know some parks that are an assault on nature. They may be dominated by plastic playgrounds, resource-hungry water features, or mown monoculture grass. I have no statistical comparisons of how we feel spending time in those places compared with being in a more biodiverse place, but my sense is that they are not what people most need, especially those of us living in crowded cities.

For myself, I’ve grown sick of taking from greater nature, from the living earth. Perhaps there is no way around it: people have to eat, consume, and (to an extent) travel. But if the relationship were more reciprocal it would be stronger, and, in the long-term, healthier. Humans do not have to be only takers and destroyers in their relationship with the more-than-human world. We can learn from communities with more harmonious relationships with nature, and participate in creative permaculture practices.

Those of us without land can choose pro-nature ways of living, such as adopting plant-based diets, using clean energy, or voting for pro-environment candidates. And we may celebrate nature in other ways. Perhaps our joyous attention has value to the ecosystem. People can give with their creativity, their songs and dances, laughter and art. What we remember to recognize as valuable, we may then learn to nurture.

The stone snake growing alongside the foot-path could be seen as a gesture in that direction. It shows our love for the place, that it’s a part of us and we’re a part of it. When the relationship is reciprocal, it doesn’t stop in the park. It moves with us through the city, weaving itself into our lives and minds, growing within our homes and hearts.

Kathleen Palti writes about connecting with nature in the Anthropocene. She has a PhD in medieval literature and is inspired by deep ecology, yoga, and myth. She lives with her family in Munich, Germany. She can be found online at https://twitter.com/KathleenPalti and at https://medium.com/@kathleenpalti.