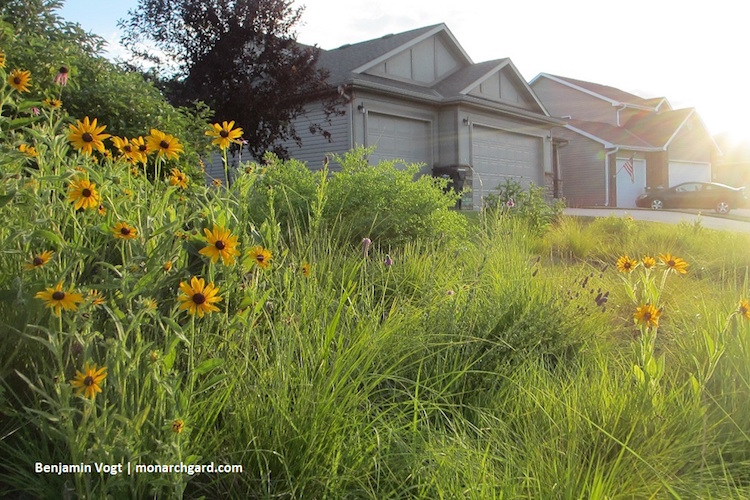 A monarch and a Liatris can explode an entire city. On the way home from a client’s garden, as  I drove by a downtown street corner on a late summer afternoon, I had to pull an illegal u-turn across four lanes of traffic. And I parked in a fire lane. I leapt out of my sedan and crept up very near a traffic light. At the base of the pole, in a washed out bed of exposed soil, was a meadow blazingstar (Liatris ligulistylis), a native to the northern Plains. Planted years ago as part of a hellstrip bed renovation, one lone spike of purple blooms was a landing pad for a monarch butterfly. 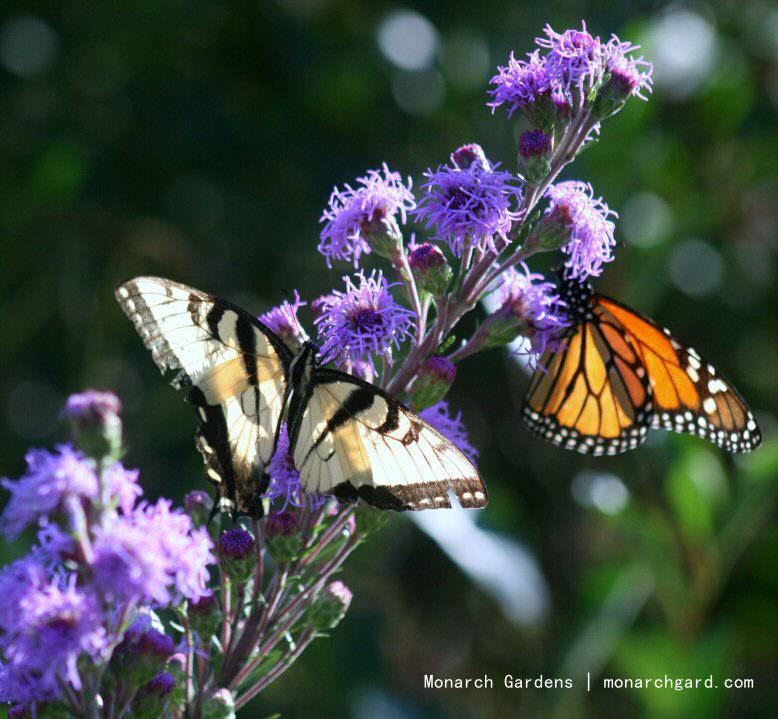 Meadow blazingstar reproduces the sex pheromone of monarchs as a way to attract these butterflies. Few other plants call to monarchs in such numbers—I once counted ten at one time on a backyard specimen at my suburban home. Here in the city, filled with concrete and thumping dump trucks and pedestrians staying far away from a strange guy crawling toward the street corner, I slowly lifted my cell phone to take a few grainy images of purpose and defiance and lingering wildness.

We tend to think wildness doesn’t exist in cities, that this incredibly altered environment for the purpose and pleasure of one species is devoid of ecology. And yet, we know this is not true when we see weeds in cracks or slam on brakes for birds crossing the road. Earlier this year a prairie chicken was found in the entertainment district of my city, stuck in a storm drain, then caught and released into a nearby tallgrass prairie remnant. There’s irony in this act of compassion—moving a bird from her former home to an echo of her home that likely also can’t sustain her.

Wildness matters. Other species matter. In so many ways our lives are nothing without the thriving context of the real world. My family moved from windy, hot Oklahoma when I was ten to cool, shady Minnesota. I remember a flock of geese that flew low over a neighborhood woodland I was exploring. I was terrified by the trees, the sweet darkness, the shafts of light like arrows, and then the startled calls of geese scraping overhead. I never felt more vibrant and aware, a young boy removed from any sense of home so he could make a new one. Every time a flock flies over my house in Nebraska, whether I’m in the gardens or typing at the computer, I know I’m being blessed. I’m being called back to the world and remembered, while being asked to remember something our species has misplaced. It’s a reciprocity that calls for more than appreciation or delight or momentary beauty, or even of feeling blessed—it’s a reciprocity that asks for defiant compassion and activism. We have to find a way to give voice to the voiceless in our culture if we have any hope of addressing linked issues like climate change, racism, extinction, food deserts, poverty, and pollution. 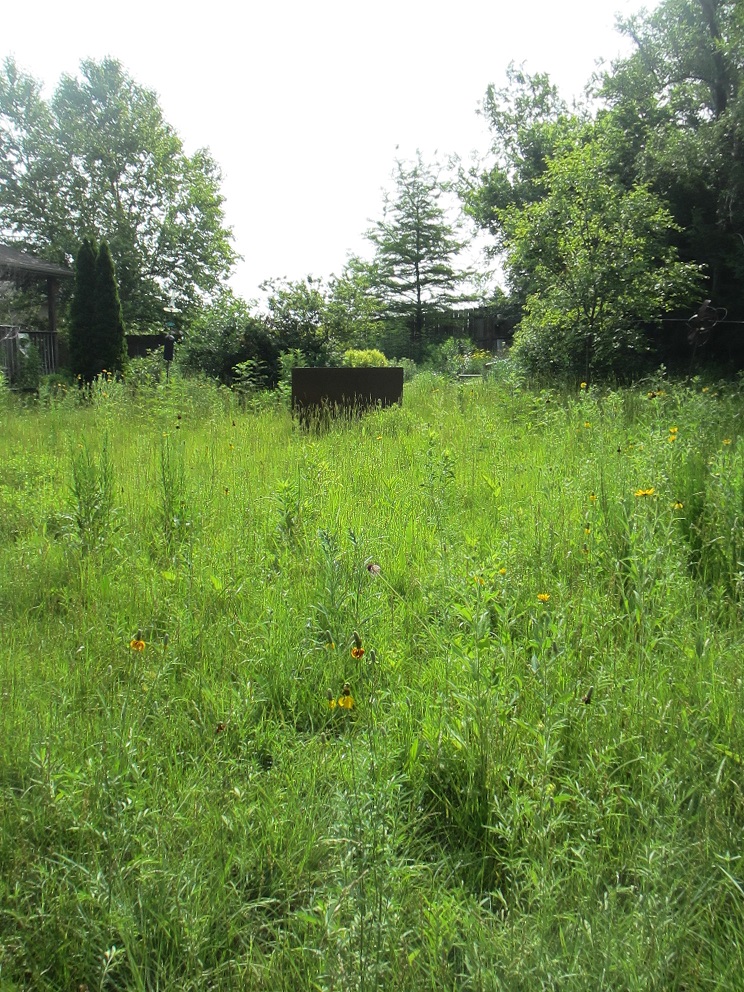 For me, gardening has become a practice for giving voice to the voiceless. I’ve turned 90% of usable space on my ¼ acre suburban lot into designed native plant beds—there’s even a 2,000 foot meadow I sowed directly into the lawn that, as I write, is awash in mexican hat coneflower, black-eyed susan, and some 30 other grass and forb species. I am an affront to my human neighbors, one who mows threes times a week and another who waters twice a day. Over the last three years the new garden in the front of my home has started dancing with bees, butterflies, and moths instead of me and my mower. A great plains toad has taken up residence the last two springs. Birds pluck dried bluestem threads to line their nests in April. Families walk their dogs and strollers and maybe, just maybe, pause a moment and have their consciousness stretched. 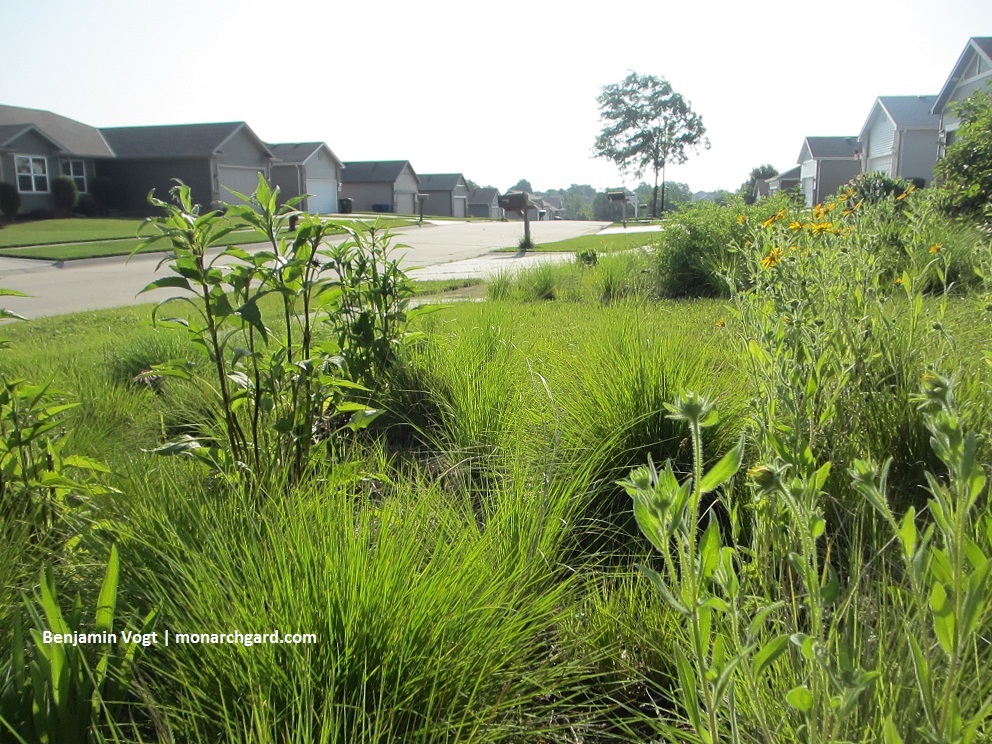 An urban garden designed equally for humanity’s concept of beauty and the necessary beauty of nectar, pollen, and shelter for wildlife is a practice in ethical empathy. It’s a revival of freedom. My garden isn’t for me—it’s for all the lives we push to the margins and that are waiting for a rebirth of compassion. Here in eastern Nebraska, where the tallgrass has been 99.9% eradicated, the species that have called it home for millennia still exist, wandering corn and soybean rows, roadside edges, backyards, and even city streets. One blazingstar and one monarch can totally upend the concept of urban design and development. I wish someone would have stopped and sat with me, if even for one minute. As the butterfly leapt up and down the stem from bloom to bloom, as a quick gust of wind pushed him off then boomeranged him back, a glimmer of Nebraska resurfaced from a few square feet.

Benjamin Vogt has a PhD in creative writing from the University of Nebraska-Lincoln. He owns Monarch Gardens LLC, a prairie garden design firm, speaks nationally, and writes a sustainable garden column for Houzz. His forthcoming book is A New Garden Ethic: Cultivating Defiant Compassion for an Uncertain Future (New Society Publishers, October 2017).