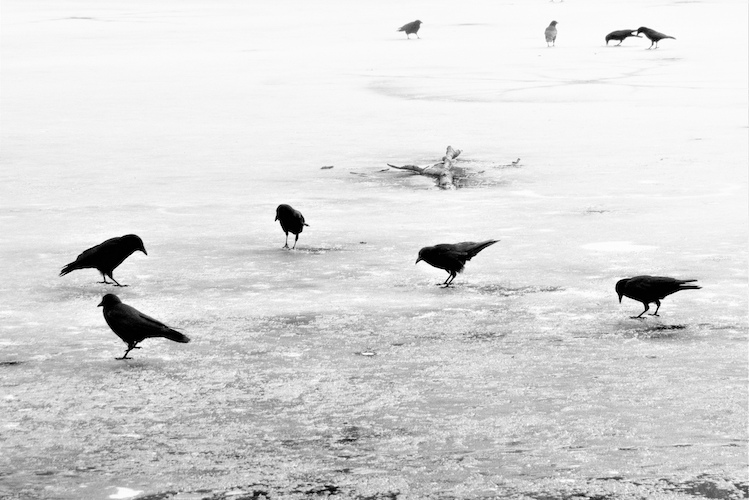 The publisher of my memoir thinks comparing my sister to a garbage-eating corvid needs a few anecdotes to support such harsh phrasing. I concede the point.

When the 2019 Polar Vortex was on its way to Chicago at the end of January, I decided to spend the deep freeze at home, writing about my strange and estranged sister. I opened my MacBook to get started the day before the weather-forced hibernation. But brain cells holding certain memories seemed to have been snatched from my frontal lobe. Perhaps it was the spirit of that plucky crow-sister, disguising herself as my own cognitive decline, who stole the stories I needed.

And so I slammed shut the laptop, wallowed in self-pity awhile, then figured out how to tee up Amazon Prime with the full 18-hour series of The Marvelous Mrs. Maisel, a cheery antidote to agonizing over pilfered memories. I threw stale bread crumbs onto my 4’ x 10’, third-floor balcony, hoping to nourish the house sparrows, finches, and chickadees before they huddled together in eaves and cracked soffits to wait out the cold. Then I shuttered myself in and applied DAP to all the little crevices around the balcony door that were spritzing air into my not-so-insulated living room. That was the extent of my preparation for the coldest two days ever recorded in Chicago.

Day One: minus 23°. I awoke to a thick film of silver ice covering all my windows. There were fractal peepholes to the outside world circling the balcony door handle and outlining my hardy geraniums on the indoor windowsills. The ice curtain blinded me to anything moving around outside the windows across the street, including any fool pedestrian out in the feels-like-minus-40 degrees. The windows emitted a luminous cold, so I grabbed a goose-feathered blanket and hunkered down far away from the frozen glaze with Henry the dog and the TV remote. 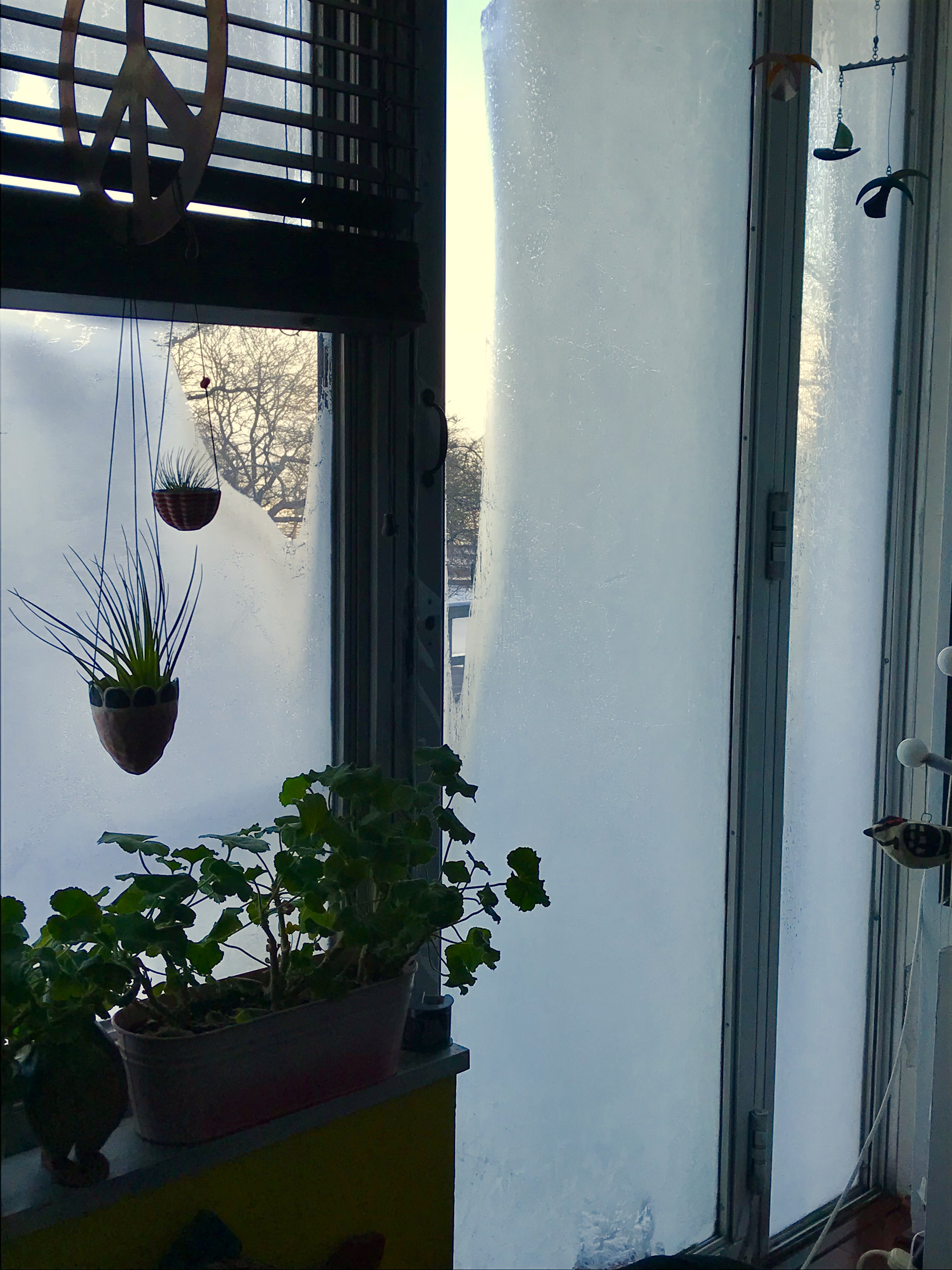 My binge-watching was interrupted by a thrashing whomp, whomp whomp on the concealed balcony. I rose to inch toward a clearing in the frosty glass.

A murder of crows had come to visit.

The American Black Crow measures 20 inches long with a 3-foot-wide wingspan. The crow and its cousin, the raven, show up in every ancient mythology as bad omens of storms, disease, or death. Native American Northwest Coast tribes believe the raven is a keeper of secrets that he doles out to help or harm us. Inuit peoples posit the crow can steal souls, a Faustian trickster. It’s been my experience that if a crow looks you in the eye, she will remember you, follow you down the street, and caw to you when she’s hungry, like a wild pet.

I once monitored a group of black-crowned, grey-backed crows on the southwest coast of Ireland. The Eurasian Grey Crows flapped about bee-buzzing fuchsia hedgerows surrounding my friend’s cottage that overlooked Roaring Water Bay, settling on the dead branches of a crab apple tree. I’m not a birder but enough of a bird lover to know these tuxedoed beauties were not something I saw in the trees around Chicago.

My Irish host caught me up on the folkloric nickname for the Grey Crow—the Morrigan, after a Celtic witch, a foreteller of doom. Wikipedia informed me the name is derived from the word “maere” connoting terror, as in night-mare. Maere is my sister’s name. The “rigan” in mor-rigan translates as queen, as does my name, Regan. Maere-Regan equals Mor-rigan, or the nightmarish queen. Dear god. Reading this felt like the Morrigan had staked terrifying messages to my head: You can’t escape her. She’s gonna get you. It’s taken a few fearful years to calm down and imagine the Morrigan, the Grey Crow, may have stolen my childhood memories of Maere, saving her from whatever nasty old stories I might expose in my book. 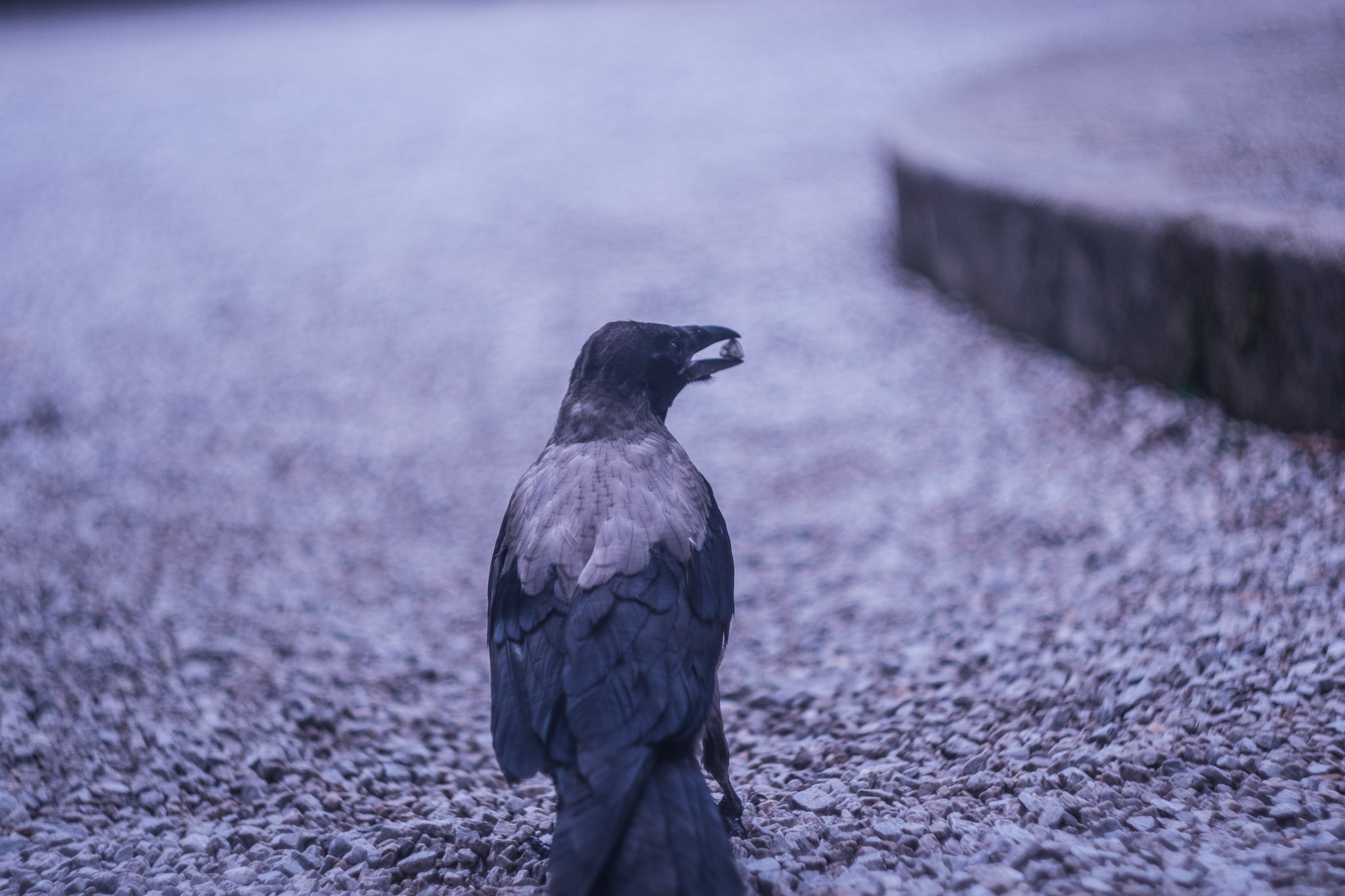 As the arctic blast began serrating its way from the North Pole down toward the Lower Forty-Eight, the goal of every bird in Chicago was to gorge themselves, find a safe place, and stay still to conserve the calories heating their bodies. The weather should have kept the crows out of sight.

Instead, it brought them to me.

Day Two: minus 21°. The ice wall on one of my windows melted enough for a small lookout. I abandoned Mrs. Maisel and placed a chair well away from the clearing to observe the crows without startling them. I prayed. Come back. Please come back. They first landed late-morning. A mighty set of black wings fluttered a plumped-up body onto the balcony railing and the rest followed, a family of five, dipping to the balcony floor for leftovers. They flew off and came back. Again. And again. And again. I remained still throughout, trying to lock eyes with Alpha bird. After hours of transfixation, out of nowhere, I trembled. Uh-oh. Were these bad omens? Come to steal more memories? 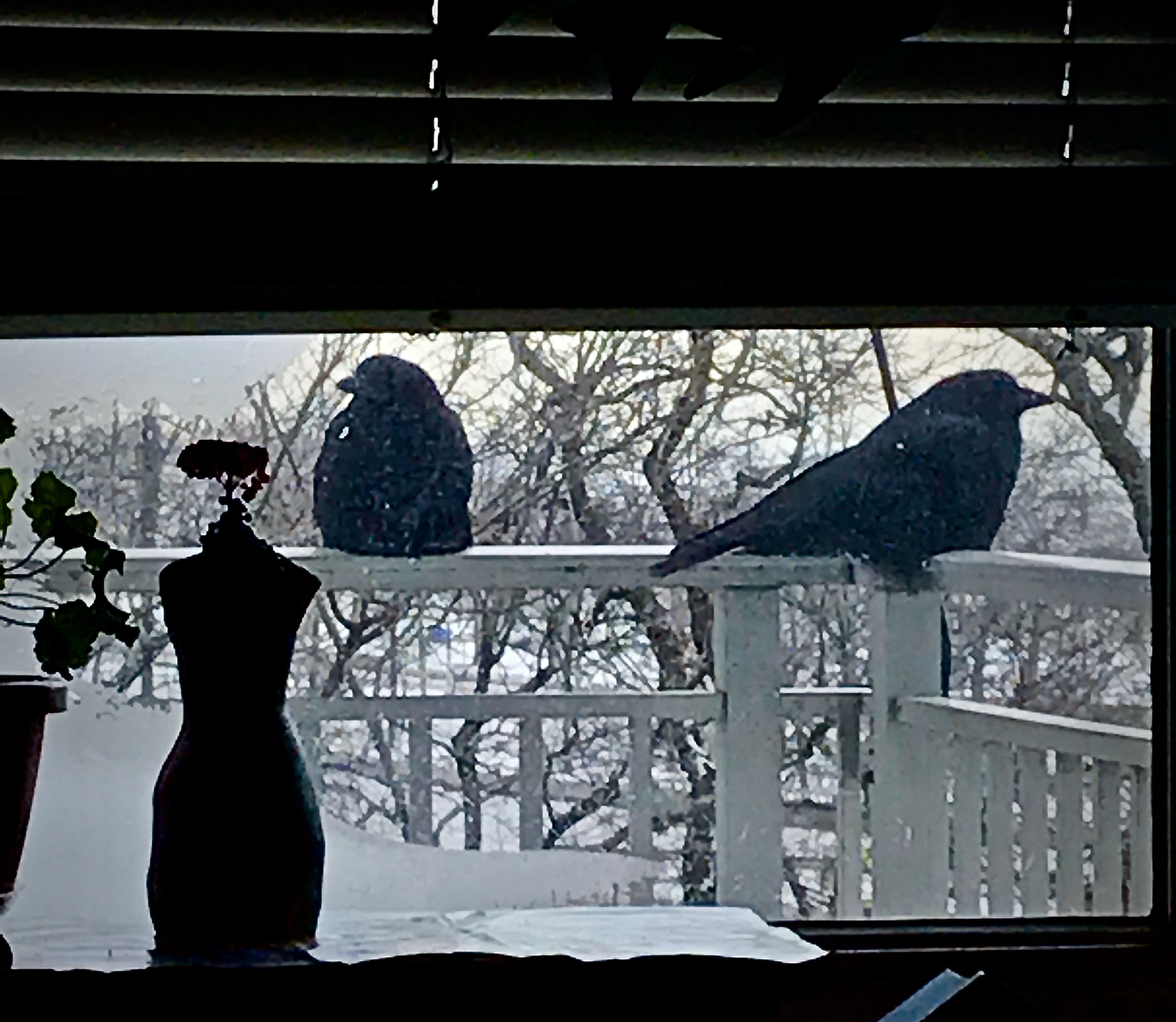 In the late afternoon, the temperature rose to minus 2 degrees. I strapped my dog Henry into his dreaded boots, packed myself in layers of cold weather gear, and set out. We clipped along the crackling tree-lined sidewalk. A crow cawed overhead.

It reminded me of a time I was in Los Olivos, California, visiting my friend Cappi. A Magpie couple perched atop a shed behind a garden shop. Magpies, whom I’ve come to think of as the most intelligent of the corvids, never fly over to the Midwest where I live, so I went round to have a chat with them. They squawked back and I was so enchanted poor Cappi had trouble moving me on. We drove five miles up Figueroa Mountain Road to Michael Jackson’s Neverland Ranch for a look-see. He had died two years before. We snapped each other’s photos in front of the Neverland iron gates before the guard shooed us away. And right there overhead in the olive trees cawing at us were two Magpies. They followed us all the way back to town, swooping down on the car and yelling, as if they were chasing us away from some danger at Michael Jackson’s ranch.

“Cappi! Look! They’re protecting us! Look! Look!” I yelled over and over. Cappi averted her eyes. She was terrified.

The ice curtain melted after the two-day Polar Vortex moved to the east, opening up my quasi-natural bird blind. When I’m inside my apartment, without the benefit of an opaque ice shield, the cautious crows keep their distance. Once in a while, when I’m out in front of my building with Henry, they call to me. I watch them fly from the elms to the ginkgo to the light poles until they reach my balcony and drop onto the deck to scrounge for the handful of peanuts I keep there.

Crows may be mythological harbingers of doom and tricksters out to capture my soul, but if they’ve stolen the bad memories of my sister, I forgive them for all of it. I gladly delete that chapter from my book.

Regan Burke’s first book, I Want To Be In That Number, is due in early 2020. Her brief memoirs and personal essays appear in the Christian Science Monitor, City Creatures Blog, Safe 'n Sound, Easter Seals Blog, Chaleur, Rise Up! and Writing Out Loud. She lives on Potawatomi land in downtown Chicago with Henry the Westie.