In 2012, Jennifer Dounda and her colleague Emmanuelle Charpentier published an article showing how a specific gene drive, known as CRISPR-Cas9, can be used to “drive” certain genetic properties through wild populations with astonishing ease. Gene drives are natural genetic systems that allow certain genes to bypass the rules of inheritance and thereby make themselves more likely to be passed along. The CRISPR system, modeled after a bacterial immune system, can be used to target and cut out specific sections of DNA (genes) and replace it with another desired sequence. While gene drives have been known about for a long time, the CRISPR system is a landmark discovery because for the first time geneticists have a tool that allows them to easily manipulate the genetic composition of wild populations.

While this technology is still in its early days, some have big dreams about its potential applications including: introducing a drive that makes mosquitoes immune to diseases such as zika or malaria (thus eliminating them as vectors), ensuring that invasive species like the Asian Carp in the Great Lakes would only give birth to males, increasing the fitness of endangered species to make them more adaptable in their environment, correcting genetic errors that cause diseases in humans and, yes, even creating “designer” humans.

These possibilities, of course, are not without risks. The nuance and sensitivity of ecosystems, the possibility of the gene drive spreading to unintended populations and the fact that gene drives are so easy to use they can feasibly be designed and implemented at home, have some bioethicists concerned. On June 8, 2016, the National Academy of Sciences released their report for recommended use and safety.

Below is a collection of resources aimed at providing the background knowledge needed to understand and weigh in on the CRISPR-Cas9 debate.

“Gene drive” technology will let us edit life in new ways, but
should we use it? 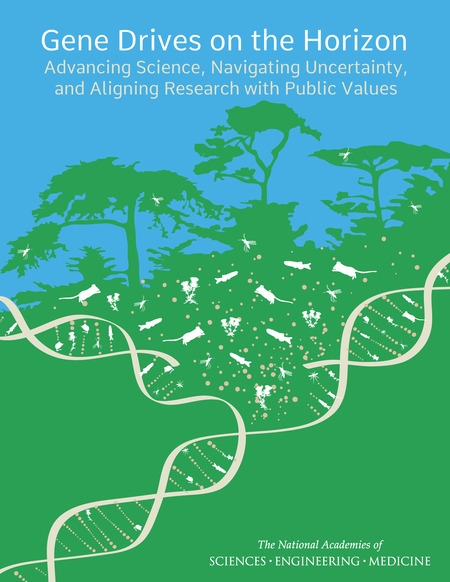 The National Academy of Sciences report on gene drive technology.