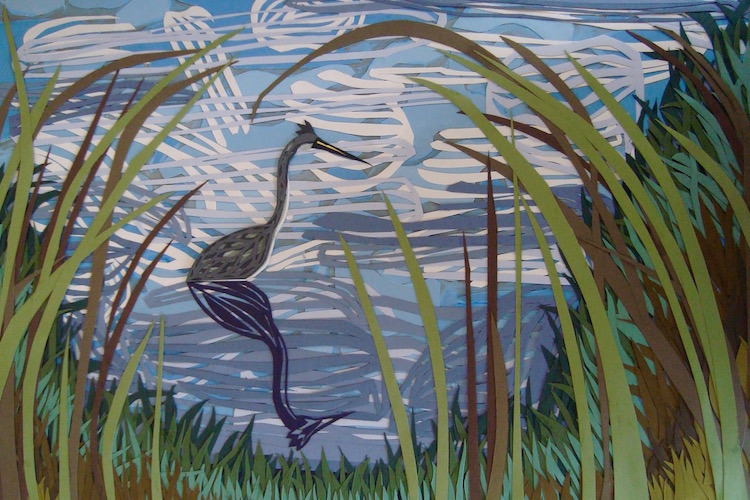 Underneath my knees, I could feel the up-down ebb and flow of breath entering and exiting the fragile, slate blue body, like the tide rising and falling in the hazy harbor down by the beach. Supporting his weak, tired neck with one hand, I opened his razor-like beak with the other. Sarah, another employee at the wildlife hospital, forced a shiny feeding tube down his throat.

“Sarah,” I ventured, as I felt the bird’s breaths becoming more shallow and infrequent, “I don’t think we should…” I looked into her frustrated face as she prepared to push the plunger through the large, plastic syringe. My knees felt chilly and damp against the dingy linoleum floor of the exam room. I shivered despite the oppressive July heat.

“He’s emaciated. He needs food. This is what we have to do—I’m only going to do a little bit,” she said impatiently. She had the master’s degree in biology. I was yet to begin my freshman year in college. What did I know?

What I did not know, I could feel. I could feel every painful second that the heron experienced that day. I could feel the cold…the lack of life remaining in the body beneath me, kinetic and heat energy being expelled from its every muscle and sinew, swirling in the air as soul, hovering, and waiting to be freed.

It did not matter that the bird was emaciated and that Sarah thought that she could “save” his life—what he needed most at that moment was not food, the substance that scientific knowledge prescribed. What the Great Blue Heron needed was to be left alone. He needed to die.

Working as a licensed wildlife rehabilitator based on Long Island, New York, I work hands-on with wild animals living in an unnaturally urban environment. Here out on the Island, all creatures—from common species like virginia opossums to rarer migrants such as greater scaup—walk a fine line between safety and danger as they attempt to navigate our busy highways, skylines, backyards, and waterways.

Great Blue Herons remain one of my favorite local creatures, but unfortunately tend to frequently require medical help, usually after being entangled in fishing line. Through my work I’ve helped save a few that were capable of recovery, but have lost many more that were beyond help. This Great Blue Heron that now lay in my hands belonged to the latter category, a victim of lead poisoning. Sarah and I were doing our best but we were following a medical protocol that no longer applied.

Like most lead poisoning victims, the Great Blue Heron was extremely frail. His reactions and reflexes were dulled and delayed, as if he was experiencing the world in slow motion. When I first pulled him out of his cage that afternoon, he had tried pecking at me with his slim, sharp beak but completely missed his target, my face—instead stabbing weakly into the empty space in front of my shoulder. At that time he still had some fight in him. At least he had tried to defend himself like any healthy Great Blue Heron would. Now, an hour later, he was almost completely unresponsive to my actions.

I cringed as Sarah pressed down on the syringe’s plunger, causing the mud-colored, calorically dense sludge to travel down the bird’s fragile reed-like neck to his empty stomach. Immediately, I could feel his body shudder, the “nourishment” providing only pain.

Sarah continued her treatment until the syringe was emptied. The heron’s once brilliant yellow eyes were becoming faded and glassy. His life continued to sneak away. I still clung to his weak neck, increasingly heavy in my hands, while his body became more stiff and still beneath my legs. Slowly, Sarah pulled the obtrusive, obnoxious orange feeding tube out of the bird’s esophagus.

The tube was out. I blinked and looked down.

The heron was dead. I held the bird’s small, rigid head and peered into its weary, half-closed eyes once more.

I hesitated and looked over at Sarah—she averted her eyes, got up, and left me where I was kneeling.

There I lingered, watching the soul of the Great Blue Heron slip out, pause, and then slowly fly away.

Erica Cirino is a science writer and artist who explores the human connection to nature—wild creatures in particular—in both her writing and art.