When I visit my friend’s house, I am sure to hide my shoes behind a closed door. This is a safety precaution I have learned over the years. Upon arriving, as I undo my laces, slobbering jaws tend to lurk just beyond the doormat, patiently waiting for the opportunity to snatch one of my shoes. The culprit’s name is Winslow, a ten-year-old yellow lab whom I have known since he was a puppy. He enjoys using my shoes to play Keep Away, a consequence I face if they are not hidden out of sight. 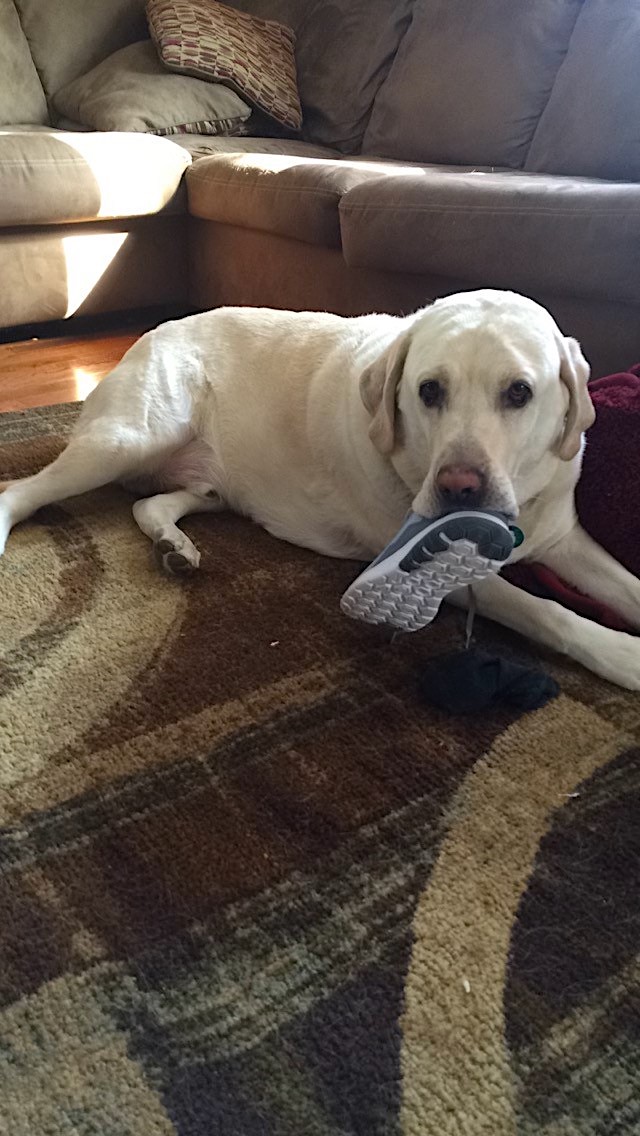 Winslow enjoys making me the retriever, but he does this by cheating. Once one of my shoes is locked between his teeth, he’ll dart for the kitchen table and slide beneath it. He gains an advantage thanks to a thicket of chair legs that make him difficult to reach. From the fortress, he’ll wag his tail in mockery, thwacking the wooden seats as he stares me down as if to say, I win! I win!

It’s not that Winslow is without toys. If he chose his squeaky squirrel or raccoon, I’d be more than happy to chase him around until he needs a big bowl of water. But somehow, he finds my wrinkly, fraying pair of Goodwill Doc Martens to be the perfect makeshift toys.

While failing to hide my shoes on arrival might become Keep Away for Winslow, my end of the situation can be described as a process of reclamation, getting back what’s rightfully mine. This typically entails waiting for Winslow to put the shoe down and grabbing it when he isn’t paying attention. Aside from the dealings of human and dog, reclamation is a common occurrence and term used in everyday language. It may be used to describe the return of objects to their rightful person or place, like a person reclaiming their car after it has been stolen. Or, a parent may reclaim candy from a child after they have snuck it out of the pantry. Reclamation can also prove fitting for use in storytelling, like a knight who reclaims his honor from a powerful dragon.

While reclamation might describe these simpler situations, I’ve been wondering about it in the ecological sense. Recently, I was reading a brochure for the Flambeau Reclaimed Mine, a nature area located in northwestern Wisconsin. The brochure provides information about the history of the site, like how the mine “operated from 1993 to 1997 and produced tons of copper, silver, and gold”—words that twist around a picture of mineral ore. A list of recreational activities also takes up the center of the tri-folded paper, lying beneath images of delighted bird watchers, a cyclist, and a cross-country skier. But although I’ve never been to Flambeau, I can tell the brochure’s language is misleading its visitors.

It is not fitting to describe the ecosystem of the Flambeau Mine as something that can be reclaimed. Yes, the mine has come and gone, and its traces are no longer visible. Yet the brochure boasts that materials mined from the Flambeau site have been “used worldwide to manufacture electrical wiring, computers, cars, surgical equipment, church bells and more.” This illustrates that mining is an activity of permanently taking from an ecosystem—materials are removed and transformed, which renders their reclamation impossible. To say that reclamation can describe a mine is therefore a mistake. It would be like me leaving my friend’s house with only my left shoe as wagging Winslow watches me depart, my right shoe in his mouth. 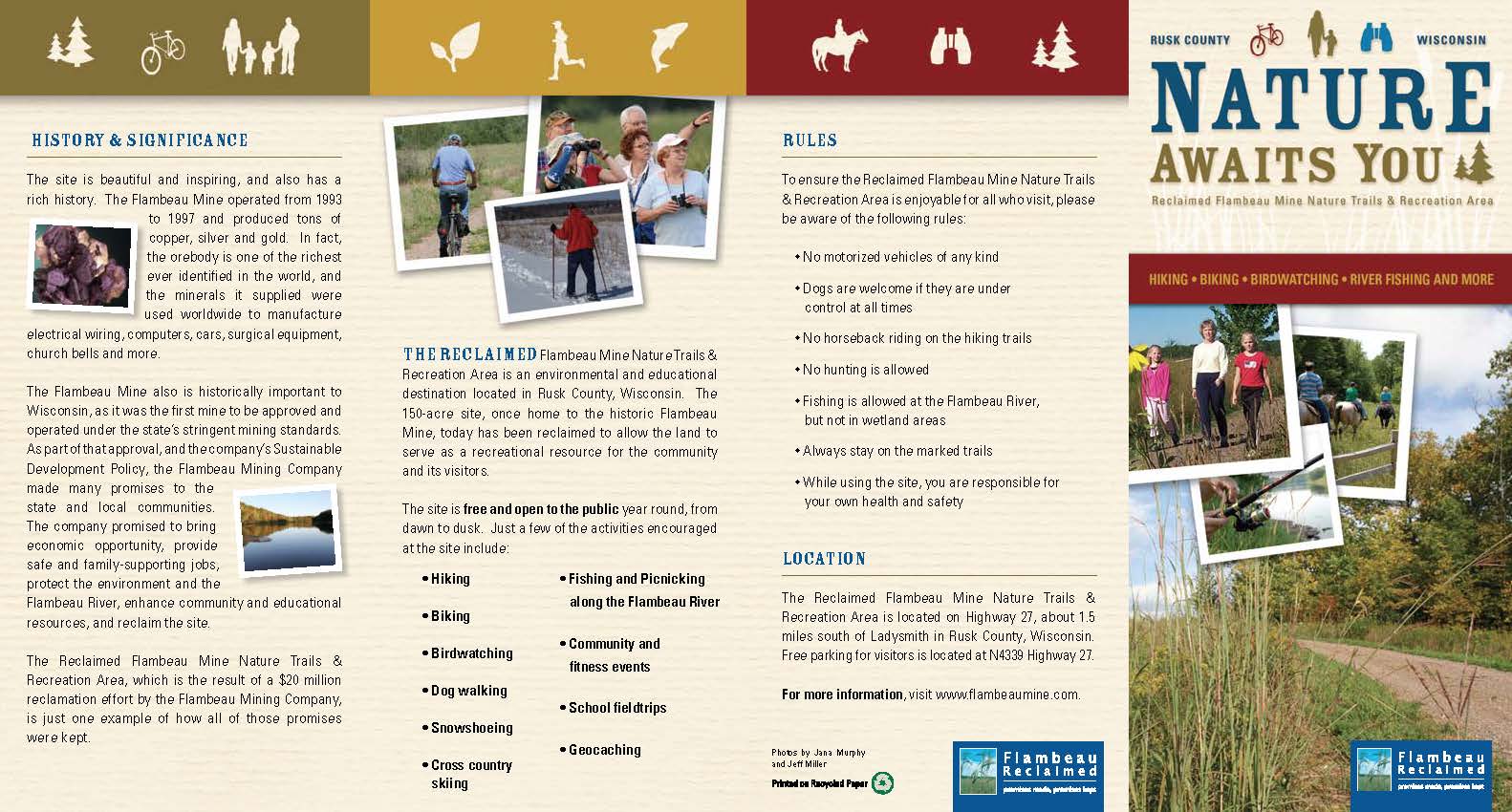 Flambeau, then, is not a reclamation site but rather a site with its metals missing. Flambeau lights my living room. Flambeau is parked by my apartment. Flambeau is what I type upon. Flambeau removed my wisdom teeth. Flambeau dings in my neighborhood on Sundays.

Aside from this, the reclamation described by the brochure contains another blind spot. By making no mention of the indigenous people of Wisconsin, the brochure fails to acknowledge that there was a seizure of the land by white settlers, and that this occurred long before equipment clawed its way into the soil. Truthfully, the alleged reclamation in the 1990s eclipses a reclamation that has yet to be completed. 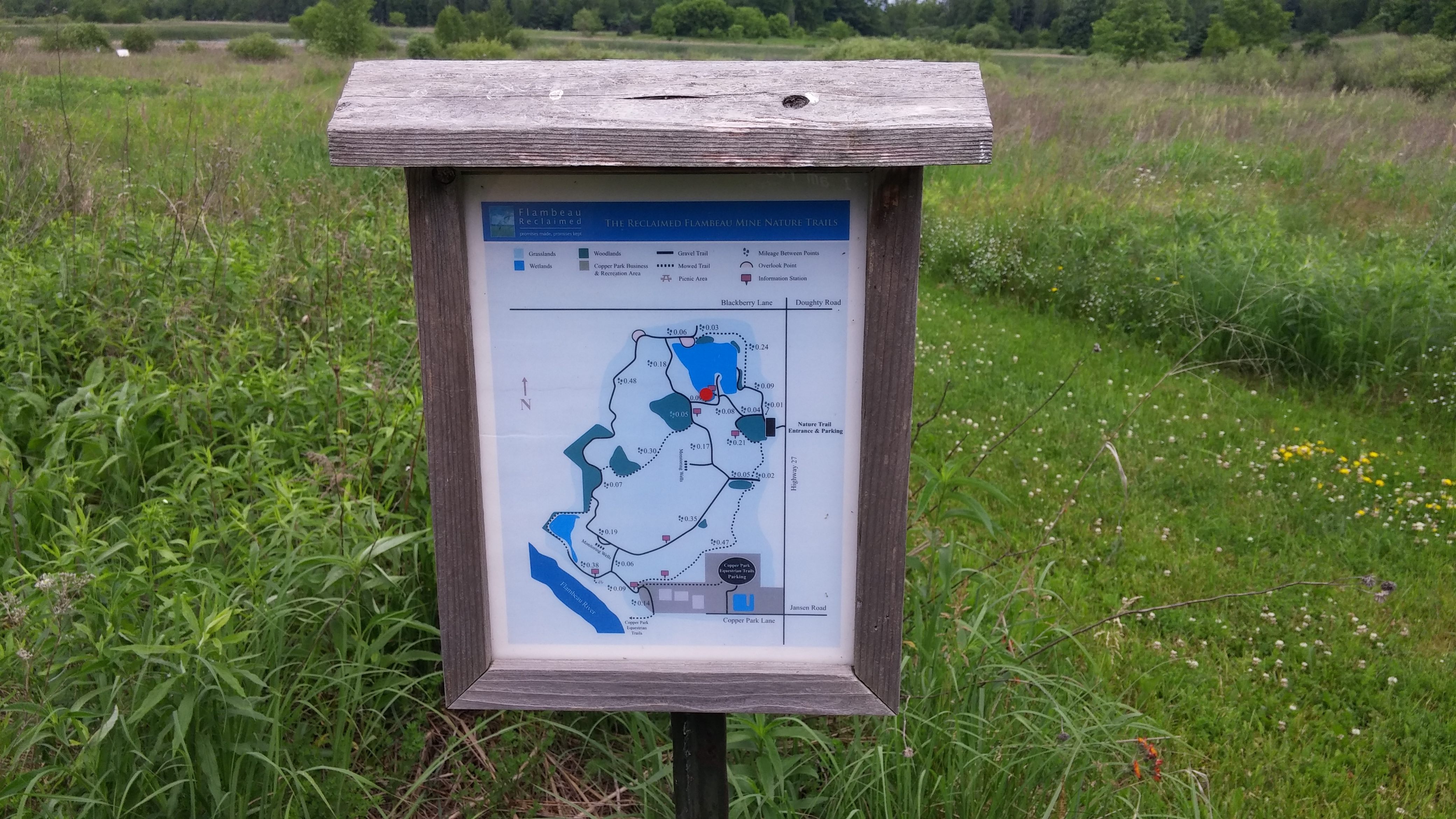 I find this dishonesty especially worrisome because of its location in a brochure. Spotting certain kinds of misinformation is easy—as easy as giving Winslow a belly rub when he’s not stealing my shoes. A report denying climate change turns out to be authored by scientists linked to a fossil fuel company. A vapid talking head spreads lies in a news interview, hiding behind the credentials that flash on the screen below her tailored suit. But neat, tri-fold brochures are typically trusted by tourists, and Flambeau’s “$20 million reclamation effort” offered as a form of ecological promise keeping is admittedly seductive. However, it avoids the true ecological aftermath a mine operation creates. The Flambeau brochure shows that misinformation lurks in even the most commonplace sources.

While I’m being critical, it’s important to acknowledge that ecological issues are complex and do not often present easy, black-and-white decisions. In talking about the mining operation, the brochure cites job opportunities as having been part of the mine’s goals. Certainly, rural areas often face specific sets of economic challenges, and the employment offered by an extractive business can be a financial lifeline. This makes fully dismissing extractive jobs trickier because even the most damaging environmental acts have a valid human stake. But extractive industries are notorious for short-term planning that favors profit over long-term ecological integrity. Calling the Flambeau Mine a reclamation may be inaccurate, but some consideration of ecological healing is better than none. While I’d prefer less extraction from our species, my hope is that at least a minimal amount of ecological planning can be incorporated into all human activity.

What should be taken away from this? In these troubling ecological times, the Flambeau brochure reveals the need to expand environmental critique into unconsidered places. This is not to say glaciers, coastlines, or even the Flambeau River should receive any less attention in favor of a brochure. Rather, the misuse of language found in the Flambeau brochure and elsewhere should nudge nature lovers always to be on the lookout for environmental falsehood. Does that cleaning agent really have fewer harmful chemicals, or does the product create harm in a different way? Is that Michigan tourism advertisement really depicting a healthy ecosystem, or is it a cleverly cropped image taken next to a coal or nuclear power plant? Does my local food truly come from a place I could identify near me? How much range are free-range chickens actually given in order to be called “free range”?

Ultimately, this is about being careful with language. Therefore, I’d like to suggest one thing for Flambeau. Instead of reclamation, let us speak of recovery—a term that better captures the reality of a post-mining ecosystem. A healthy future for the Earth begins with the precise use of language; being honest with words is what spurs action.

In hopes of getting matters onto the right track, I’ve revised the Flambeau brochure to create a summary of the site. Quite literally, I have used the brochure’s own words to do this by utilizing a writing style known as the cut-up method. Cut-ups involve exactly what one might expect: cutting up an existing text. Once paragraphs become bits of paper, the words are rearranged to evoke new meaning, wrestling control to present the truth of the situation—that Flambeau is not reclaimable post-mining.

Note that the available words for writing are limited in contrast to other styles. I have included a few of my own words in the piece, though over 90 percent of the language is taken from the brochure itself. Because of this limited selection of words, sentences will feel as though they are crying out for editorial attention. But this is what makes cut-ups unique.

Lastly, rest assured that no brochures were harmed in the making of this revision; I used a copy of the original version. 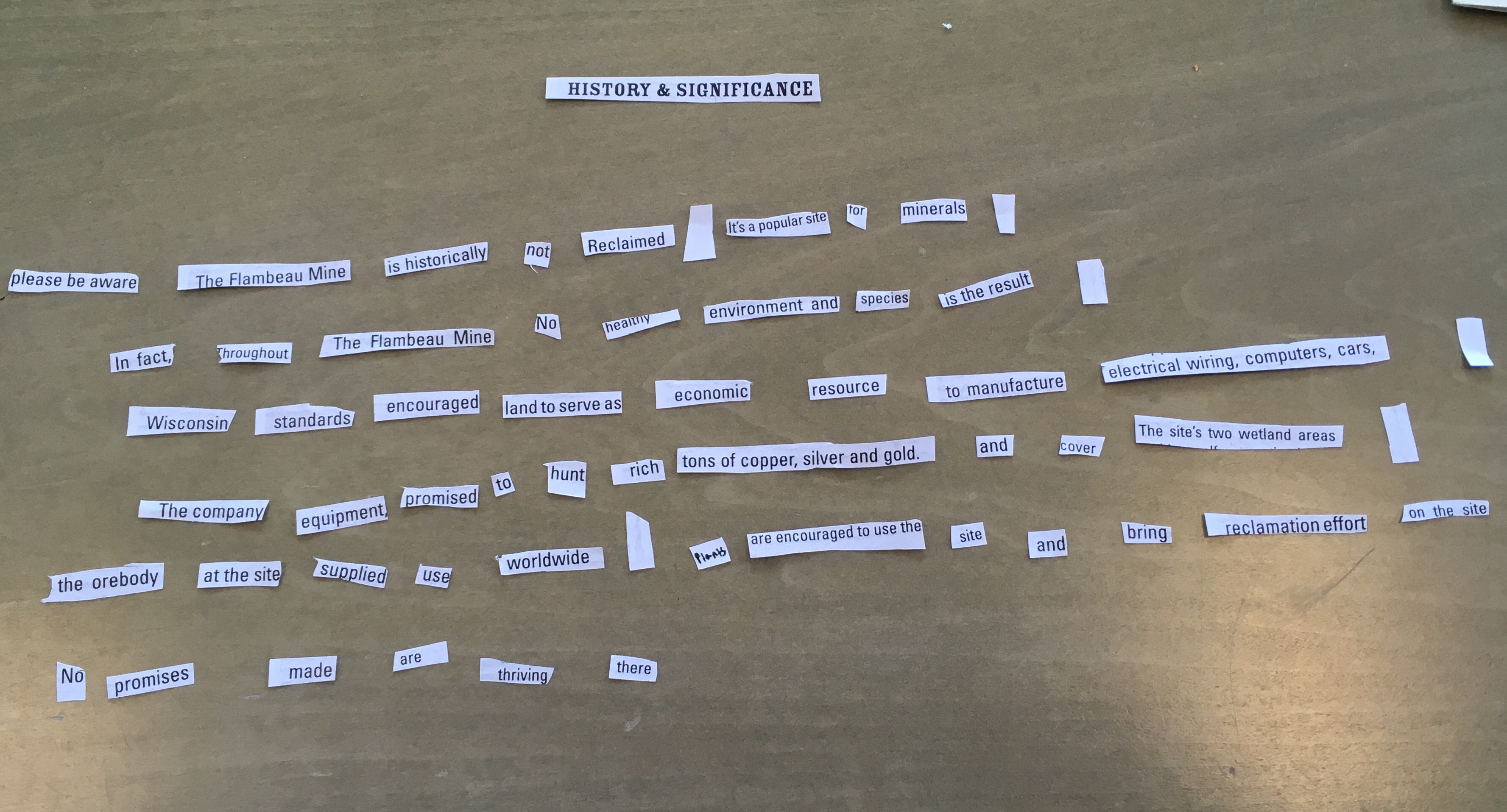 No Promises Made are Thriving

Please be aware: The Flambeau Mine is historically not reclaimed. It’s a popular site for minerals. In fact, throughout The Flambeau Mine, no healthy environment and species is the result. Wisconsin standards encouraged land to serve as an economic resource to manufacture electrical wiring, computers, and cars. The company equipment promised to hunt rich tons of copper, silver and gold and cover the site’s two wetland areas. The orebody at the site supplied use worldwide. No promises made are thriving, but plants are encouraged to use the site and bring reclamation effort on the site.

All photos by Alexander Moore

Alex is a graduate student at the University of Montana, Missoula where he is studying environmental philosophy. He completed his undergraduate study in English and philosophy at the College of Wooster. His research interests are environmentalism of urban areas, Thoreau, and wilderness.