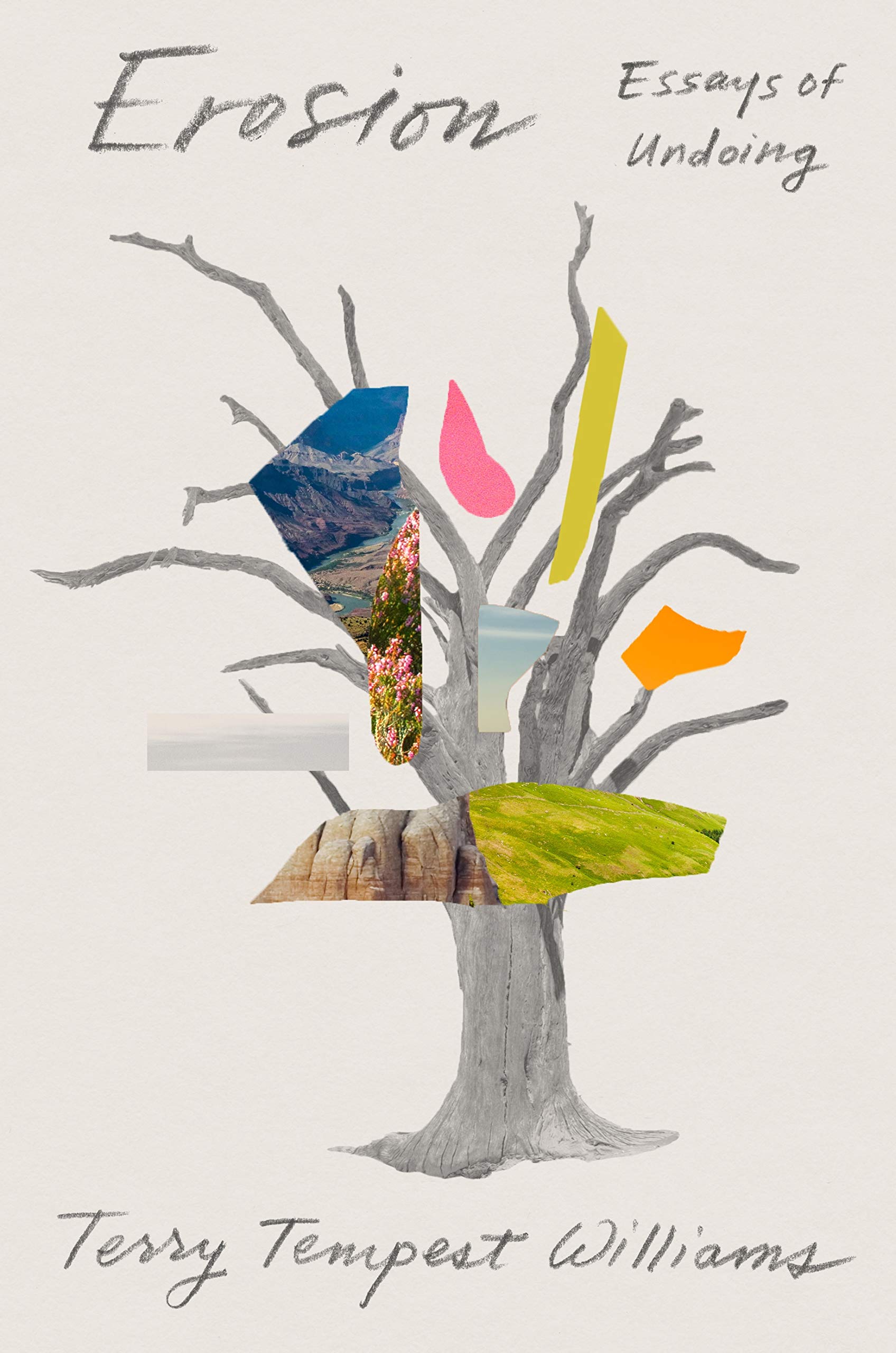 Ecologically speaking, “erosion” has double significance: it conjures human degradation, especially of soil that underpins our food and natural systems; and, on a broader time scale, it evokes the collective work of winds, water, and the Earth’s moving surface that  sculpts the planet’s varied settings and regulates its chemistry. In her book Erosion: Essays of Undoing, celebrated conservationist and writer Terry Tempest Williams looks straight at this ecological wearing away and adds to her purview the erosion of self and community, which similarly has a two-fold possibility: existential erasure or an unfolding that occasions recasting and renewal.

Erosion’s essays, written from 2012 to 2019, movingly address personal loss—the pained ending of Williams’ teaching at the University of Utah and the suicide of a beloved brother—and portentous public contests involving western United States lands and global climate change. Additionally, Williams spotlights places, people, and laws (notably the Wilderness Act and the Endangered Species Act) that inspire hope amidst erosional indifference to heritage and nature. Published shortly before the full-blown coronavirus outbreak in the United States, the book is even more pertinent now. Tempest does not prophesize a certainty, but rather two directions—two evolutions. The better of these is genuine human and ecological community, and it is enabled when enlivened advocacies meet with a grief (an erosion) that brings core priorities to the surface. In the recently released paperback edition, Williams adds an evocative chapter, “The Resonance of Stone,” which amplifies on the power of erosion, with a focus on the surface and subsurface sounds resounding in the sandstone formations she loves.

Tempest lays out the public and private scope of her meditation early on. Reflecting on the Utah landscape that is her home, Tempest writes: “What is real, given what we know? I trust what I see—in an erosional landscape such as this, weathering agents are real: water freezes and shatters stone, rocks fall from the force of gravity; new rapids appear in rivers. Storms gather and floods roar through dry washes, cutting and scouring a wider channel and changing the course of water. Perhaps this is what is happening to us now—we are being worn down to our essence as we are forced to change course” (20).

Interlinked with the erosion theme, Tempest recurrently presents the ethic and experience of “wilderness” as an agent of reconnection, which she expounds in an early chapter (co-authored with her husband, Brooke Williams) on the Wilderness Act of 1964. Celebrating the poetic language of the law, she invites us to listen to its definition of wilderness: “An area where the earth and its community of life are untrammeled by man, where man himself is a visitor who does not remain . . . an area of undeveloped Federal land retaining its primeval character and influence . . . protected and managed so as to preserve its natural conditions” (37).

The Wilderness Act has proven to be as potent as its language. It began by safeguarding 54 areas totaling 9.1 million acres, and it now protects over 800 areas covering more than 110 million acres. Moreover, with the threat of climate change—which is frequently underscored in Erosion—wilderness becomes critical for many of our stewardship responses. “As the Earth heats up, wilderness offers a cooling of the senses, a storing of the waters, and a bank of biodiversity where carbon is held, not spent . . . an insurance policy against ecological disasters caused by desertification, acidification, and mindless development that also leaves the land bare of beauty and vulnerable” (38).

In the tradition of Thoreau, wilderness can also be politically empowering. In another chapter in Erosion, Williams interviews environmentalist Tim DeChristopher, who spent two years in prison for posing as a buyer at an auction and bidding up the price of Bureau of Land Management land access. In the interview, they discuss DeChristopher’s wilderness sojourns. “My views on how to live, and what actually makes me happy; how to form a little community out there with a few people; how human actions really work . . . they all formed out there,” DeChristopher says. “And I think that’s part of why some people fight against wilderness, fight to extinguish all of it. . . . It’s a place where people can think freely. Tyranny can never be complete as long as there’s wilderness” (118).

Williams is eloquent when writing on wilderness and other settings in her Utah home state, especially with the chapters on Bears Ears National Monument. In December 2016, President Obama granted Bears Ears National Monument its protected status under the Antiquities Act, thereby protecting its ecological, archaeological, and native people signatures, in addition to its dramatic western landscape. But in 2017, the Trump administration moved to drastically reduce Bears Ears from 1.3 million acres to 200,000 acres and allow extraction and grazing interests to use the freed-up land. (The Trump administration similarly cut Grand Staircase Escalante National Monument, also in Utah.) Currently, native peoples and western and national environmental groups have taken the Trump administration to court, and court rulings could be issued before the end of 2020 ( see NRDC litigation and advocacy updates at https://www.nrdc.org/court-battles/nrdc-et-v-trump-bears-ears ). The Trump administration has nonetheless proceeded in soliciting potential business contracts, with permits possibly being granted this October, depending on how the cases proceed.

In one essay, “Nahodishgish: A Place To Be Let Alone,” written three days after President Obama established Bears Ears National Monument, Williams celebrates the language of the proclamation. “Within this historical document,” writes Williams, “the reader will find a language more akin to poetry than public policy, well worth reading out loud around a dinner table or campfire” (191). The official document also resonantly describes the ancient artifacts of ancient peoples and their living presence within Bears Ears, a tribute to native peoples’ leadership in securing its protection.

Later in the chapter, she recounts a visit to the monument area with Jonah Yellowman, the Navajo spiritual leader, whom she asks about the effect of Trump’s move on him. “‘Bears Ears is a sacred place for us,’ Jonah reiterated. ‘Now, it is threatened. We have to go deeper.’” (259). Reflecting on his words, Williams writes, “Perhaps Jonah’s call to go deeper is a call to acknowledge the power that resides in the Earth itself, the organic intelligence inherent in deserts, forests, in rivers and oceans, and in all manner of species beyond our own.”

In addition to public contests, Williams also finds nature’s power in personal losses. She describes the pain of losing her teaching job at the University of Utah, which, she points out, just happened to coincide with her own Bureau of Land Management bidding for conservation purposes. The loss of her position strikes at her identity as a teacher in Utah, but it ends up heightening her attachment to natural settings in the United States.

Perhaps the most tender chapter is the one on her brother, Dan, who committed suicide and to whom she dedicates the book. Williams (170) depicts her brother’s strong intellect (“He read and understood the texts of Nietzsche and Husserl and Heidegger and Wittgenstein as thoughtfully as any scholar I knew”), his talent (his last job was releasing raptors—redtail hawks were his favorite—into the wild), and his suffering with addiction. Their sibling bond endured, “and when things got bad,” writes Williams, “I was there to rescue him.” We find in Dan, too, the book’s motif. “I am eroding—Dan said to me. I am eroding—I say to him now,” writes Williams.

Later, in the crematorium, she waits for many hours with her other brother Hank. Before the considerate operator finalizes the reduction to ashes, he brings to Williams and Hank the last, hot bones of their brother Dan. “We wanted to touch them, but instead place our hands just close enough to feel the heat emanating from them. The remaining energy of our brother’s life was being transferred into the palms of our hands,” writes Williams. It is a powerful and strangely beautiful episode in the book, one that depicts a silent thermodynamics at work in redemptive erosion—a life’s warmth transported to its kin. The chapter ends with Hank taking Dan’s ashes to Cedar Mountain Wilderness Area and Utah, releasing “the white ashes of Dan’s body to the earth and sky, acknowledged by a circling hawk above what he could hear but not see—one body yielding to another.”

The essay “The Lost Daughter of the Ocean” also resonantly links a relationship to a place, this time the Great Salt Lake, for which Williams is famously associated from her widely read 1991 book, Refuge: An Unnatural History of Family and Place. Williams goes there with her friend and former student, Alisha Anderson, a landscape artist. In her art, Anderson commemorates lost Native American life. For example, in one work, she draws red petroglyph-like sketchings on a dike which incorporates Native American village and bodily remains.

During this visit, Williams observes gaunt pelicans, formerly healthy visitors of the lake who set their eggs at Gunnison Island. The drought has made for a land bridge to Gunnison Island, over which coyotes steal the formerly safe eggs.

Yet the lake still beckons, and Williams immerses herself in it, grieving and healing for herself, amidst the pelicans, the Native American resonances, and the world. “Without thought, I baptize myself by the authority vested in me, not God, not patriarchy, with only the lake as my witness. My immersion is complete” (173).

As she comes out of the water, she sees Anderson, not too far off, and realizes: “She offers me the refuge and courage of women who dare to live by their own authority, trusting their instincts, and follow their calling to create beauty in the midst of despair for another generation. She holds the vision of a retreating Great Salt Lake not as a vanishing presence but as a guidepost for what is to come” (173).

Indeed, the guideposts are there, and even the gaunt pelicans, ambling to an unfixed destiny, persist. Surprisingly in 2020, we find a resurgence of persistence, living within a greater threatened, yet communicating, nature. It is in this condition that Terry Tempest Williams’s Erosion: Essays of Undoing reads as a generous meditation for a way beyond an exploited time and place, to a redeemed American vista.

Richard Blaustein is a science, environmental, and legal journalist based out of Washington, DC. In addition to Minding Nature, he has contributed to BioScience, Physics World, Physics Today, World Policy Journal, Washington Lawyer and other publications. He is currently working on a book on climate change abrupt change in the paleo and contemporary world.