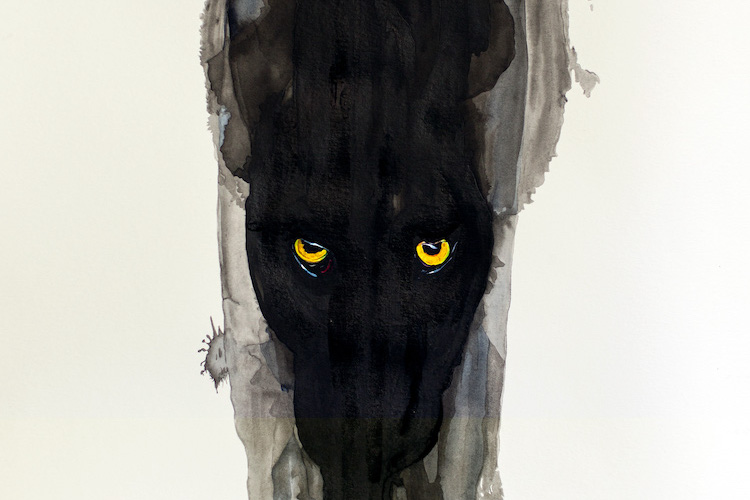 In the fall of 2019, a little over a year after my family moved from San Francisco to Sonoma County, I looked up one morning while driving my two young boys to daycare and preschool and saw the familiar “V”-formation, or skein, of Canada geese flying over Route 12. I’m a nature nerd, and I’m forever trying to excite my kids about natural history; I pointed the birds out to the preschooler and I asked him what species they were. He answered correctly, and I felt that wonderful surge of daddy pride that’s really just my ego being stoked.

But the good feeling didn’t last long—my son asked me where the geese were going. I didn’t know. I hazarded a guess that, perhaps because the birds were flying west, they were headed to graze on the dairy farms near the Laguna de Santa Rosa wetlands, but I was frustrated that I couldn’t give him a more sure answer.

Growing up, when a flight of geese passed overhead, depending on the species and time of day, not only could I tell you, with confidence, where they were headed—a salt marsh, perhaps, or a farmer’s field—but I could usually name the specific spot. I could tell you the geese were heading for the tidal estuary at the outlet of Rattrap Creek, or Buck Lane’s winter wheat field behind the post office. When a child spends as much time outdoors as I did, and they have a parent or parents who are deeply invested in the local ecology, it’s almost inevitable that they will become intimately acquainted with the land and the other animals, the nonhuman animals, that also call the place home.

As a kid, I regularly explored our nearly 300-acre coastal Virginia farm, and at times it felt as though I could summon an animal. Not literally, of course, but I’d find myself in a loblolly pine grove on a warm afternoon with the sun slanting just so, and I’d “feel” that I was going to encounter a black rat snake. Then there it would be. I don’t believe I was actually sensing these creatures before I spotted them, but I was so in tune with the farm that I knew—even without thinking about it—when and where I was likely to encounter different species.

But that was thirty years ago on the other side of the country, on the Delmarva Peninsula, the narrow strip of land between the Chesapeake Bay and the Atlantic Ocean. My parents still live there, and my family visits at least once a year, but I’m no longer rooted there. Frankly, I’m no longer rooted anywhere—which is, for most of us, typical.

My father lived in two dozen places before he married my mother. In 1970, they purchased the farm on the Eastern Shore of Virginia and, a few years later, abandoned their professional and personal attachments to Washington, D.C., and New York City, and settled full-time on Heron Hill, the name they gave to the Virginia property. My father is a writer, and in one of his books, a 1994 memoir about his stewardship of the farm, he writes about continuity in our American imagination.

Unlike our European cousins, who—if wars permit—are content to live in the same towns that their great-grandparents built, Americans move on and build new nests as soon as the old foraging grounds are exhausted—more like our primate relatives. [...] The irony of our culture’s cavalier attitude toward continuity is that in our hearts, we know it’s wrong.

I think “wrong” is a very strong word, but it seems to me the relative restlessness of Americans does diminish our sense of place. And, today, our peripatetic inclination is compounded by social media and the so-called “attention economy”; there’s always something else to look at and somewhere else to be.

Although I’ve lived in only six towns or cities, many fewer than my father, six is still more than the average European. I grew up in rural America, alongside Atlantic salt marsh and barrier islands, surrounded by flatland fields. After living in a few other places, I moved to San Francisco from New York City in 2010, and, as of last year, I call the North Bay my home. Today, my family’s house sits on the northwestern slope of a hill that rises above suburban Bennett Valley, near the northern extent of the Sonoma Mountain range. How do I root myself there, in this very different landscape? Will I ever be able to “summon” animals on the trails of Annadel State Park or the jetties of Bodega Bay?

I think it will be hard, but not impossible. And that important challenge brings me to one of my current bodies of work. Each piece in the Familiar series features an animal I have encountered near my new home. They help provide me with a “way in” to place. I need to observe and understand the landscape, along with its flora and fauna, and, over time, develop a more complete understanding and an intimate relationship with my immediate home and, more generally, the Bay Area at large—its contours, its rhythms, its aromas, its political history, the origin of its street names, the geological and ecological changes it’s undergone. All of it. This has been a work in progress since my cross-country move almost a decade ago, but I feel like I’m still tiptoeing in. As a child, all of this information is just absorbed; as an adult, the process is more like cramming for a test. 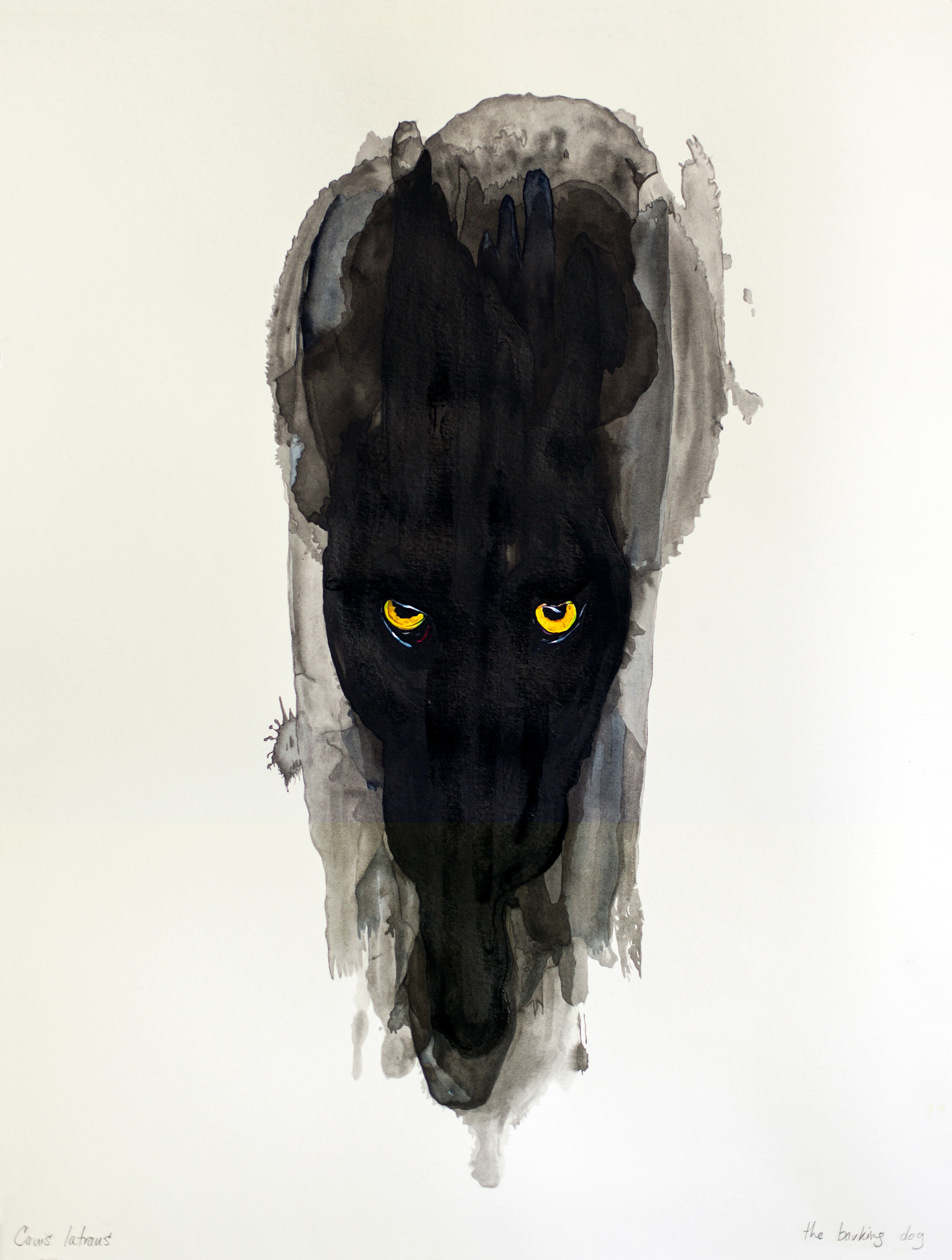 But these Familiar works aren’t only about my portraying my new “familiars,” the animals that share my adopted home ground with me. The series’ name also references the concept of supernatural animal spirits or guides, a notion that may be most closely associated with European folklore and witchcraft, but in fact has ancient roots in almost every culture. The heads of the depicted animals are dark and insubstantial, yet seemingly on the verge of materializing.

At the base of each piece, I’ve written the animal’s scientific binomial on the left and its translation on the right. For example, on Familiar: Bobcat, you’ll see “Lynx rufus” written on lower left and “bright red light” written on lower right—“Lynx” translates as “bright light” and “rufus” means “red.” This naming is important to me. I’m fascinated by etymology, but I also think of enunciation as akin to incantation; that is to say, I think of speech as a means of creation. In this case, naming as a means of summoning. It ties me to the animal in a practical, scientific way—it satisfies our cataloging, labelling instinct—but also in a whispered, more mystical way. 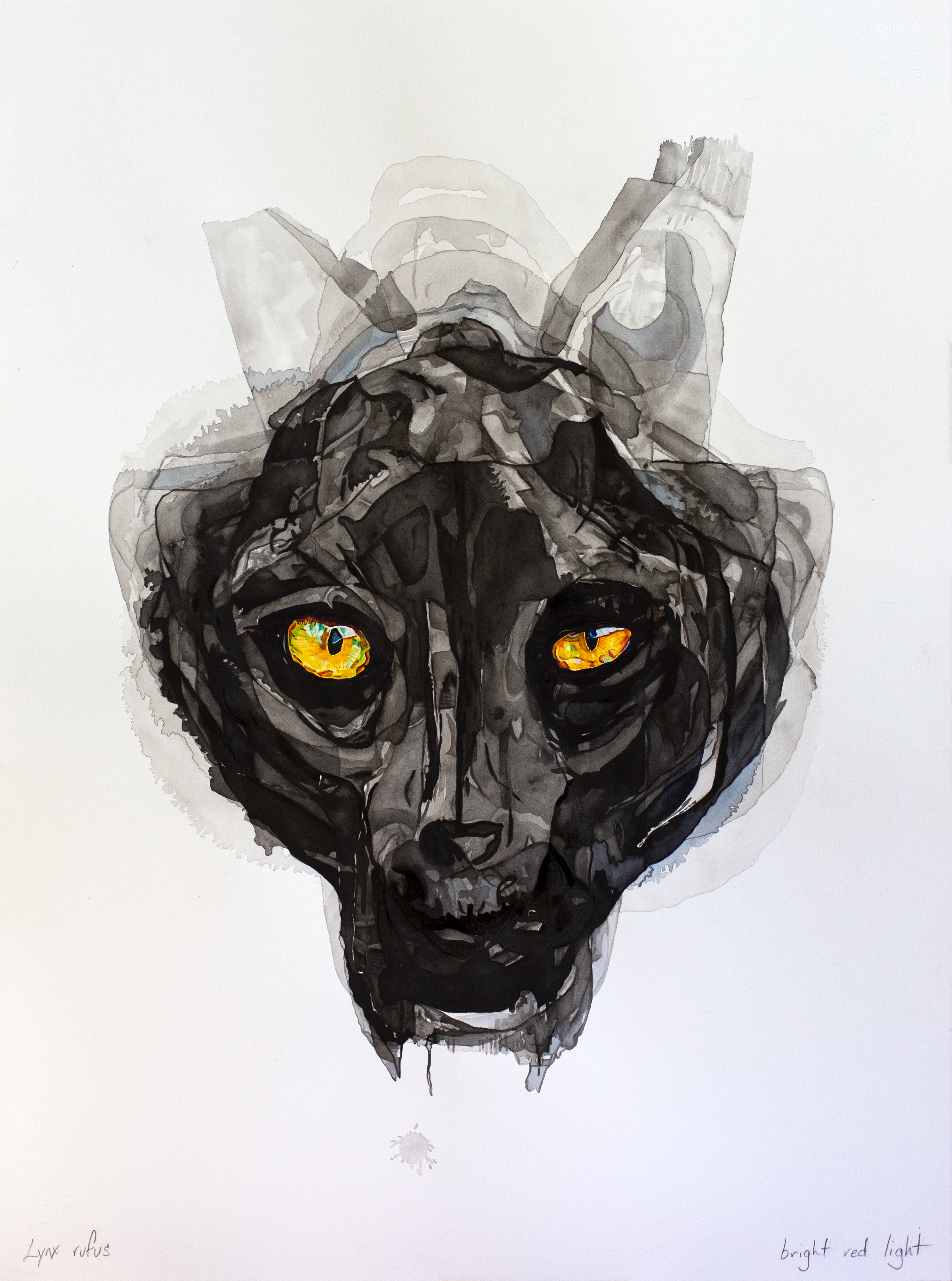 And these depictions of my new neighbors aren’t meant to be ciphers or simple symbols. The wraithlike animals look back. They stare, offering us an opportunity to accept their gaze and to wrestle with the very idea of doing so. What does it mean to look—to really look—into another creature’s eyes? Is it an empathetic exchange? Or is it hostile and defensive? And what does it tell us about ourselves? And about what we were—not long ago, evolutionarily speaking—or what we may yet become? The pieces are intended to be visually seductive, yet confrontational. I hope that viewers are drawn to the pictures and want to meet the gaze of each represented animal, but that sustained engagement isn’t entirely comfortable.

One of my favorite writers is Loren Eiseley. His thoughtful takes on geology and biology have informed my attitudes about natural history, conservation, environmentalism, and even art-making, and this series is steeped in his ideas, more than any series I’ve produced before. In a 1969 essay called “The Ghost Whisperer,” he wrote,

[The soul] craves that empathy clinging between man and beast, that nagging shadow of remembrance which, try as we may to deny it, asserts our unity with life and does more. Paradoxically, it establishes, in the end, our own humanity. One does not meet oneself until one catches the reflection from an eye other than human.

Here’s hoping you all meet the gaze of a nonhuman neighbor soon, and that we all find ways to further develop our sense of place. 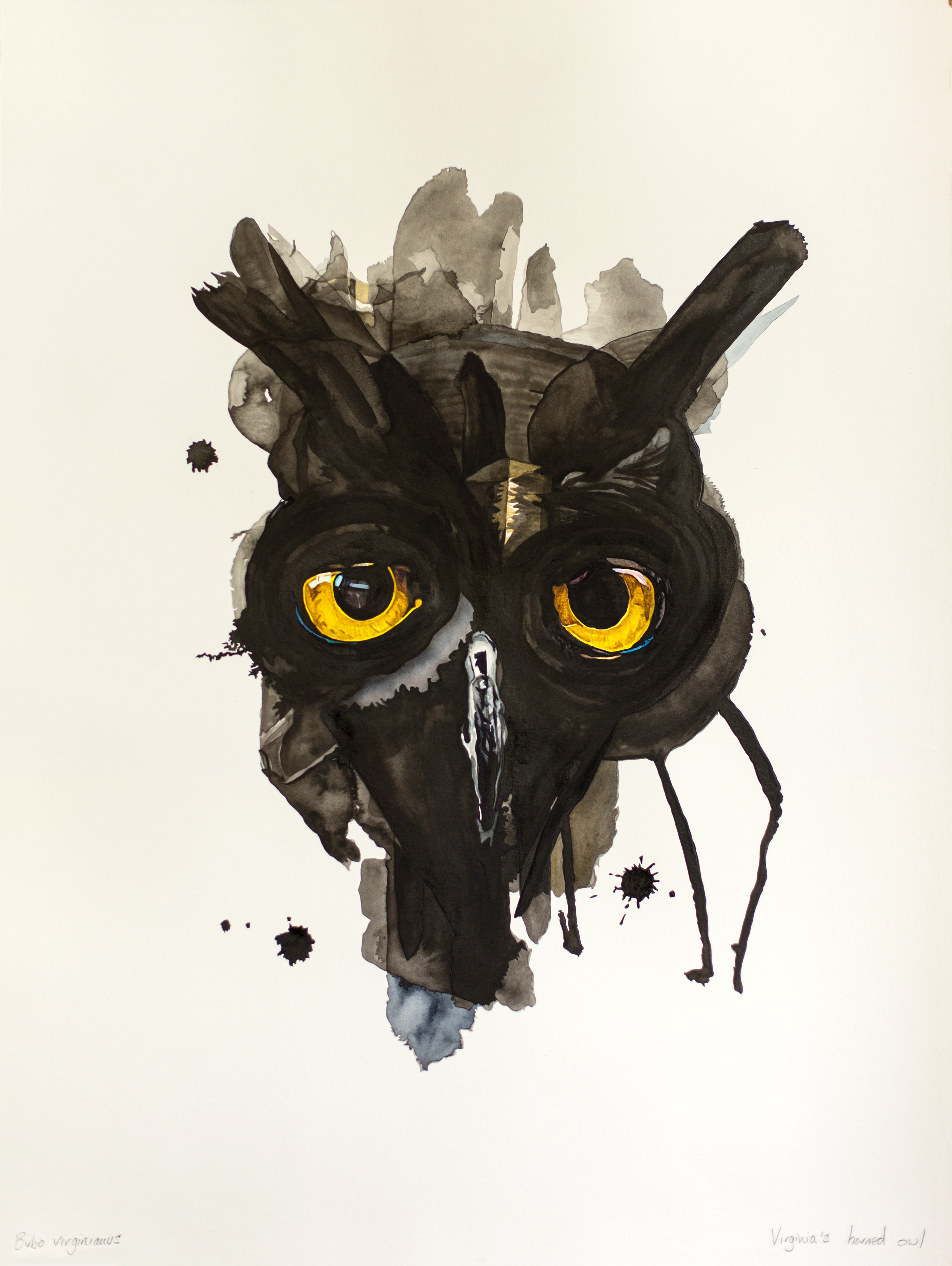 Christopher Reiger is an artist, writer, and photographer fascinated by natural history, conservation, & ecology. He's Virginia rooted, NYC steeped, and transplanted in Northern California, where he's working to spread roots. His artwork and illustration can be viewed on his website (www.christopherreiger.art) and you can keep up with his art and outdoor adventures on Instagram @christopherreiger.