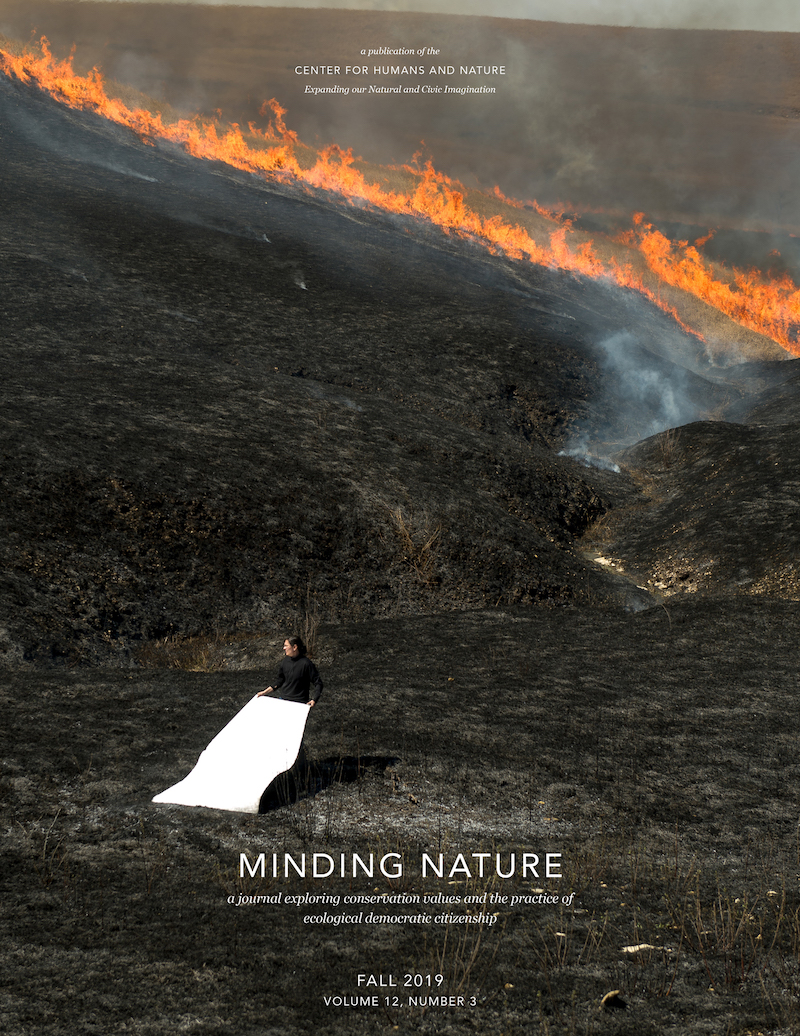 Between Gaia and Demos

What is between Gaia and demos? What connects the planet as an assembly of life and the democratic polity as an assembly for the good life of the people? They exist on vastly different scales certainly, but do they belong to different worlds, different orders of existence? If not, how should we speak about their common fate?

I’d like to use this “Last Word” to announce a beginning. We are launching a new project at the Center for Humans and Nature that revolves around the theme of kinship. From biogeochemical planetary cycles to our microbiomes, being human is deeply and necessarily relational. As humans, “we are stardust” (as singer-songwriter Joni Mitchell put it) and, simultaneously, could be “classified as a bacterial ecosystem” (as renowned biologist E.O. Wilson put it). But what might such kinship mean for conscientious, day-to-day engagements with other species?

Natural History as a Practice of Kinship

We clamber out of the rafts onto the dry terrace, heading up into the side canyon, where, it is rumored, ancient pictographs and giant cottonwoods await. The first week of June, almost noon, this treeless terrace radiates heat.

The Preacher of the Prairie

On this mid-April day, shining bluestar, prairie phlox, and Alabama snow wreath are in bloom, and the air smells faintly candied, as if a fair were being held just out of sight with vendors glazing apples in cinnamon and syrup. A hummingbird drinks from a coral flute of honeysuckle. A gust of wind bewilders a clump of switchgrass, and a bee fly buzzes toward a bouquet of wild red columbine, disguising its two missing wings until it lands.

Telling the Story of Nature: The Artist as 21st Century Naturalist

I am caught between two realms. In one, I am telling the story of the world through song, dance, the graceful stroke of brush on paper, and I am more attuned to texture than density. The fine lines of the imagination interpret my experience of time and space—my remembrance of every plant, animal, stone, river, and person—and it is this creative montage of memories that tells my story in vivid, descriptive images to a roomful of rapt listeners. This is the artist in me, and he lives to feel the world.

It is no secret that we are at the end of days. Each year I traverse the same forest and fields that I have walked since I was a child, when my parents followed the new human habit of seeking escape from modernity through immersion in nature, and they grow quieter.

To and From the Common Brick: Slow-Motion Disaster on Chicago’s South Side

To begin, imagine a brick. This one is vintage, sought after by collectors, made of a unique type of clay only found from Lake Michigan to Kankakee, Illinois; from Milwaukee, Wisconsin, to Gary, Indiana. It is called Chicago common brick. It is pink—not shocking pink or peony pink, but pink like well-grilled salmon, mottled and pocked, idiosyncratic. It is anything but common.

The Pragmatist’s View: A Conversation with Bryan Norton

Curt Meine (CM): In July 2016 the third Biennial North American Congress for Conservation Biology convened in Madison, Wisconsin. In anticipation of Bryan Norton coming to Madison to present at the conference, I asked him if he would make time for an interview for the Center for Humans and Nature. Bryan graciously agreed and, in an hour-and-a-half conversation stretching across two sessions, we were able to explore at least a portion of his background, career, influences, and ideas.

You Belong to the Land: A Conversation with Karen Washington and Leah Penniman

When the Center for Humans and Nature set out to shape a question on farming for its Questions for a Resilient Future, we asked grower-teachers Karen Washington and Leah Penniman if they would be willing to have a conversation about their work. In the midst of their full days of growing food and community and traveling to teach and share their experiences, we gathered on the phone for a conversation. Sharing is a core part of both Karen and Leah’s philosophies around farming.

I read most of Robert Michael Pyle’s new book Magdalena Mountain from the balcony of my apartment in Havana. That isn’t a wholly inappropriate place to read Pyle’s novel, which is set on the campus of Yale and in the Colorado Rockies. In December 2016, he was among a group of U.S. writers who came to Havana for a five-day conference with Cuban writers. We stayed in casas particulares (private houses) only six blocks from where I am sitting. Our goal was an exchange of work and cultural perspectives and to begin walking a bit of common ground.

One million plant and animal species are now facing possible extinction due to a range of anthropogenic factors, from climate change to humanity’s unsustainable use of natural resources. This is one of the main conclusions drawn in a recent report from the Intergovernmental Science-Policy Platform on Biodiversity and Ecosystem Services (IPBES) and presented in May 2019 at the United Nations.

Descending into the Anthropocene

Near the end of Underland, author, Cambridge professor, and mountaineer Robert Macfarlane makes one of his many descents. In this particular scene—one among several throughout the book that tingle flesh—he dangles in ice-blue air, suspended from a rope dozens of feet down the throat of a glacier.

Shoes, Mining, and Cutting to the Truth: Flambeau Reclamation

When I visit my friend’s house, I am sure to hide my shoes behind a closed door. This is a safety precaution I have learned over the years. Upon arriving, as I undo my laces, slobbering jaws tend to lurk just beyond the doormat, patiently waiting for the opportunity to snatch one of my shoes. The culprit’s name is Winslow, a ten-year-old yellow lab whom I have known since he was a puppy.

Grief and the Depth of Your Love

Tendrils of sweet smoke rose into the silver sky above the carved stone altar that sits on a hilltop on Putuoshan. Putuoshan is an island in southeastern China revered as the home of Guanyin, the Buddhist Goddess of Mercy. I watched as three Chinese nuns dressed in gray robes lit sticks of incense, placed them in the ash-filled bowl on the altar, bowed, and then walked toward the edge of the cliff.

The narrative is changing, albeit slowly. “Climate change” terminology is sliding into “climate crisis.” Environmental issues are at the forefront of national and international news. However, every day in the life of the environment feels like one step forward and at least one step back. Progress gained stands alongside profound loss.

Dragging through the Fire: On Erin Wiersma’s Konza Prairie

Fire is primordial and eternal. It attracts us and burns us like moths but heats us and gives us life. The core of our planet burns, and the center of our solar system does, too. As the planet heats up, fires become more prominent and more dangerous, reminding us of our beholden existence to Gaia. Their remnants of ash and char point to something volcanic and ancient.

The Hollywood Forest Story—Eco-Social Art Practice for the Symbiocene

I live in the lands of my Irish ancestors. My ongoing creative and research work is a quest to understand how to live well with forests, how to enact ecological insights in these urgent times of eco-social emergency.

The Sierra Nevada is a dramatic and rugged mountain range that extends across the southern region of Spain. At 3,486 meters, Mulhacén is the highest mountain on the mainland. The protected area encompasses terrain with torrential rivers, sheer-sided gorges, stony scree slopes, glacial lakes between snowy summits, and, in the foothills of the Alpujarras, cultivated terraces of almond trees and vegetables. The Poqueira River cuts through the Barranco de Poqueira gorge.

I am your forest.

The sound of your ax

I am Black Rhino.

I am Honey Bee.

I, once sang the Salmon,

Gave you my voice

A step outside of thought

and I return in

and the days are long

Five months after the fire
visitors to burned hillsides talked about
a plant they’d never seen before—
the Whispering Bells.

On the Cover: Erin Wiersma,