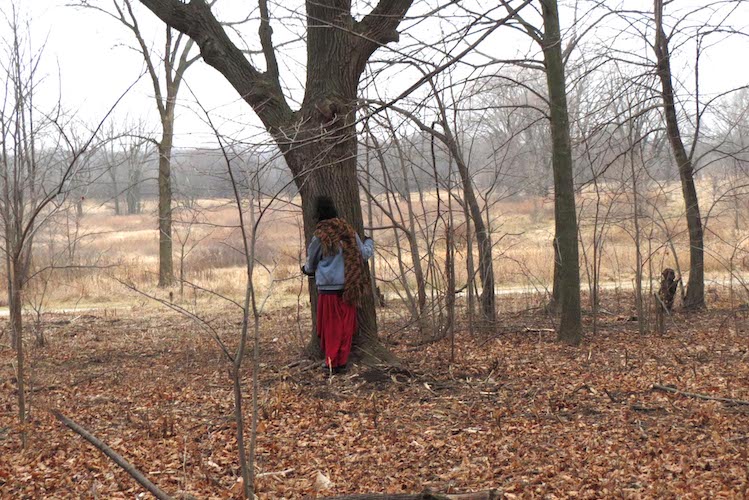 It was a curious scene for a snowless week before Christmas in Wisconsin: some two-dozen people—masked, distanced, and bundled up for warmth—stood spread out in a wooded glade in Havenwoods State Park, with their eyes closed. “Notice all your senses,” coached dancer Jenni Reinke. “Notice the sounds around you, the feeling of the air, the feelings of your body. Now open your eyes, and look as if you were looking for the first time. Notice what you’re seeing.”

The event was a “Winter Mindfulness Walk” organized by Reinke, a Lead Artist with ArtWorks for Milwaukee’s Environmental Arts Program. In collaboration with partners from Northwest Side Community Development Corporation, Century City Triangle Neighborhood Association, and Friends of Lincoln Park, Reinke is leading nine teen interns in engaging the community through environmentally themed placemaking activities and public art projects.

Reinke is well-qualified to lead this kind of adventure: she is a dancer with the WildSpace dance company, which often performs out of doors; she was in Daniel Burkholder’s “Scenic Routes,” a recital that played in all four seasons of the year at the Riverside Urban Ecology Center woods. She currently teaches an online meditation class for UW-Milwaukee, and she led a movement program for the Performance Ecology Project, which explores how to deepen the relationship between humans and the natural world. Reinke’s goal today was twofold: to “get people into their bodies through gentle experiences that invite internal and external sensory awareness” and to create connections through collaborative activities. 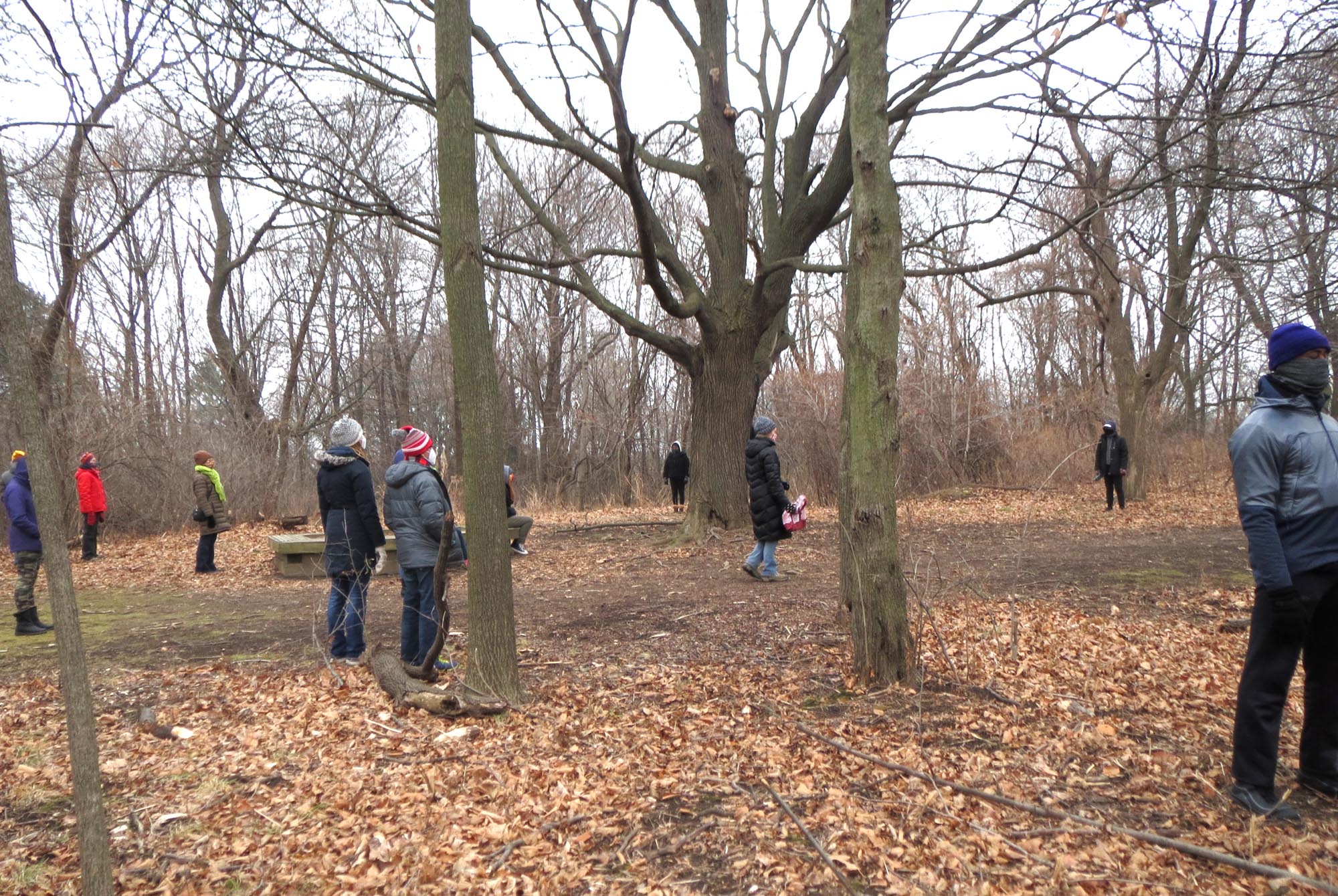 Havenwoods State Forest, the only state Forest in the City of Milwaukee, has a long and checkered past. The site went from wetland to farmland, to a farm staffed by prisoners, to a military prison, to an Ajax missile base, and finally, thanks to a federal restoration project in the 1970s, back to wetlands. Its paths lead through dense woods and open prairie, skirting marshes and ponds. On this day, the land seemed to be dreaming under its thick blanket of buff-colored grass, presenting monochrome scenes in subtle grays and browns, like Chinese ink brush paintings. Only a stray line of geese and a few birds stirred the breath of the land, its vitality slumbering deep in the secret places of winter.

It speaks of our curious times, and our great pandemic hunger for space and community, that so many folks responded to Reinke’s invitation, even on a chilly overcast Saturday afternoon. Along with ArtWorks interns and staff, there were people from the Northwest Side Community Development Corp, plus a few friends and neighbors, all happy to get out of the house and under the soft open sky. We began by greeting the forest with a bow inspired by Japanese custom, which I led as a representative of the Performance Ecology Project. Then, crossing the threshold of the woods, we were invited into silence, helping us to be present to the moment (at several points people were invited to share a few words about their experience).

Brown leaves crunched underfoot like crisp paper; pale light filtered through a spidery canopy of naked branches, the network of some sleeping giant’s nervous system. Facing an array of widely-spaced trunks, rough grey columns of varied widths and angles, Reinke encouraged us to discover the ever-shifting corridors and doorways created when we move through and between them. Finding a particular tree, she invited us to touch the corrugated bark, to explore the trees as dance partners, sharing our weight with them, leaning, pulling, embracing, feeling the confident solidity of their deep-rooted bodies with our own flesh and bone.

The air was brisk, but completely still: not even the tall skeletons of prairie flowers stirred in any breeze as Reinke led us into different environments at a gentle, contemplative pace. Some people remained silent, others chatted companionably as we moved from place to place. A meadow of swirling matted grass offered a maze of  paths to explore. An expansive field circled by a ring of forest opened the opportunity to feel tiny under the spacious sky, the city totally out of sight. Here, Reinke led a group improvisation inspired by the flocking of birds, following the leader in a succession of spontaneous movements. Finally, returning to our starting point, we offered gestures of thanks and farewell, first to the land, and then to the group. 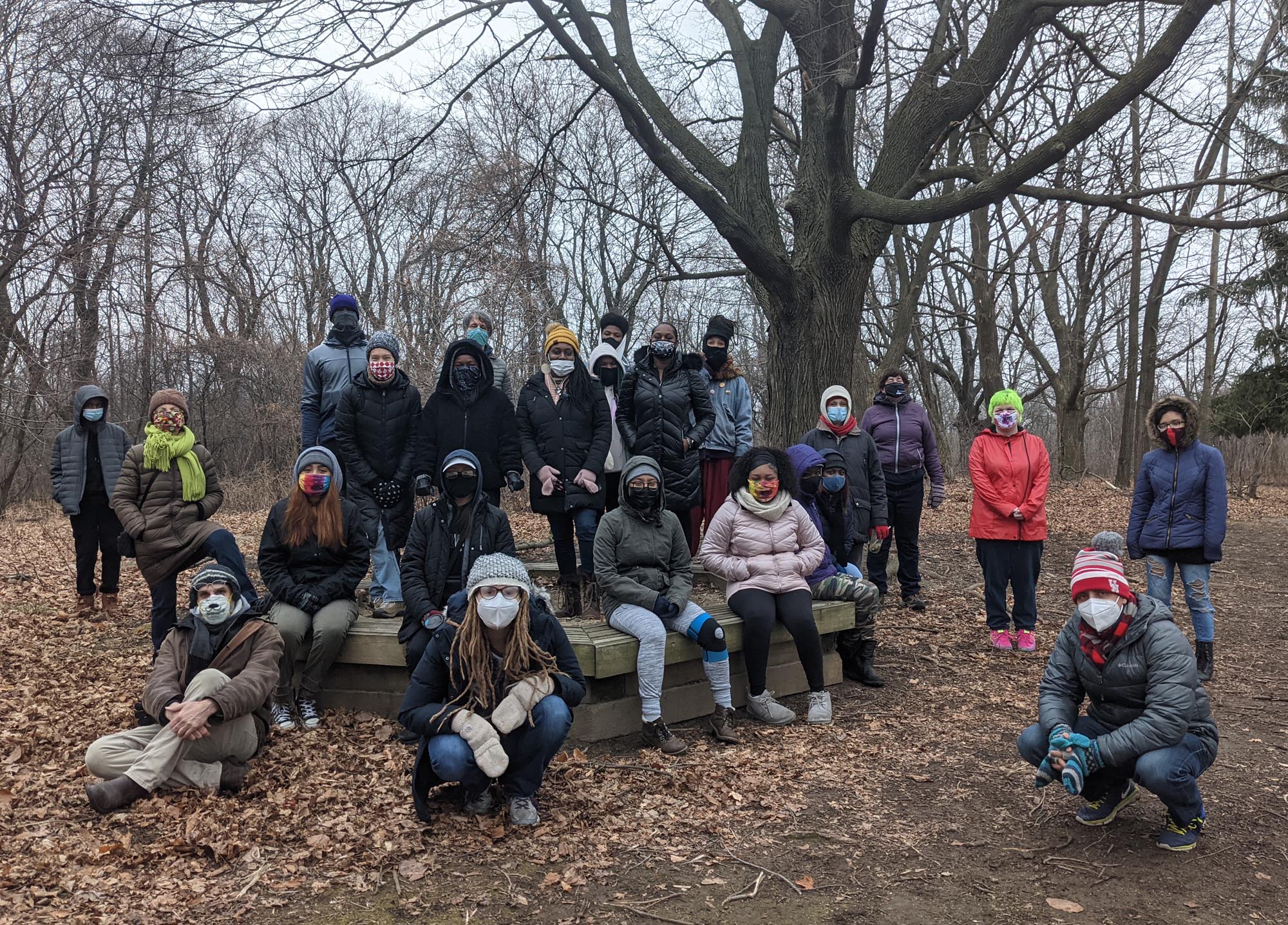 It was very moving to witness these gracious nonverbal expressions, and then to hear what people had to say about their experience in a brief talkback. One man reported that, though he had worked with trees all his life, he had never experienced them in this way before. A woman voiced her delight in playing with fallen leaves as she had when she was a child. “Every tree has its own energy,” observed a teen with bright chartreuse hair. Many people expressed gratitude for being able to connect with nature in this way. Some made meaning out of their experience: “My attention went to the tree that’s broken,” one woman said. “Even though it’s broken, it’s still strong.”

As the group happily dispersed to the parking lot, I felt gratitude for everyone’s gracious and patient participation, and for Reinke’s initiative in bringing us out on this unlikely day to experience the warmth of community, both with the land and among each other. Taking the time to interact with nature in a contemplative, sensory, and playful way not only grants us the well-known physical and mental health benefits of immersion in nature; it enacts a relationship that goes beyond environmental slogans; it creates connections that are embodied, emotional, and ecological, all at the same time. Performing these kinds of practices, we can fulfill ecologist Aldo Leopold’s injunction that we recognize land, not as property but as “a community to which we belong.” 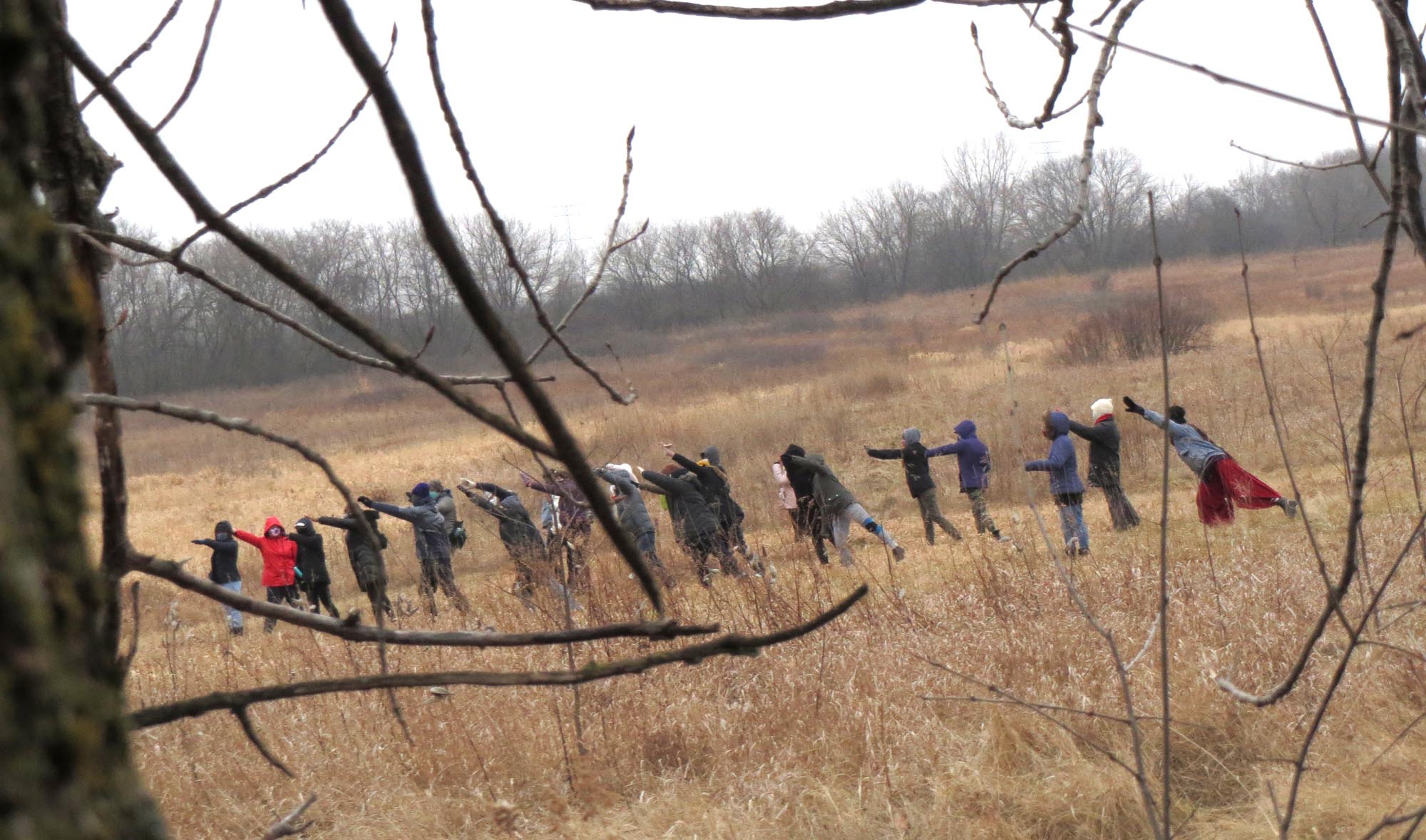