I’m reporting from the year 2050. The world has achieved a prosperous state of sustainable human well-being embedded in a healthy ecological life-support system without continuous economic growth. Let me describe what this world looks and feels like and a bit about how this was achieved.

What really strikes me about this future world is the overriding sense of calm and peace, without any tinge of boredom. The best way to describe it is the difference between adolescence and mature adulthood. Our current society is adolescent—fixated on physical growth, changing so fast it is difficult to adjust—frenetic, self-absorbed, self-conscious, irresponsible, insecure, and taking. The world of 2050 is mature—not growing physically and therefore able to focus on development, and improving quality not quantity. It is secure, invested in long-term relationships, responsible, nurturing, and giving.

For example, the average work week is twenty hours, but the distinction between work, learning, and leisure has become pretty blurred, so it’s difficult to make this comparison directly, as you’ll see. But the bottom line is that life is not so hectic and people have more time for their families, each other, and the things that really interest them. That’s where the sense of calm and peace comes from. Since people can pursue what really interests them, they are not bored, and their mental health and sense of satisfaction with life are excellent. 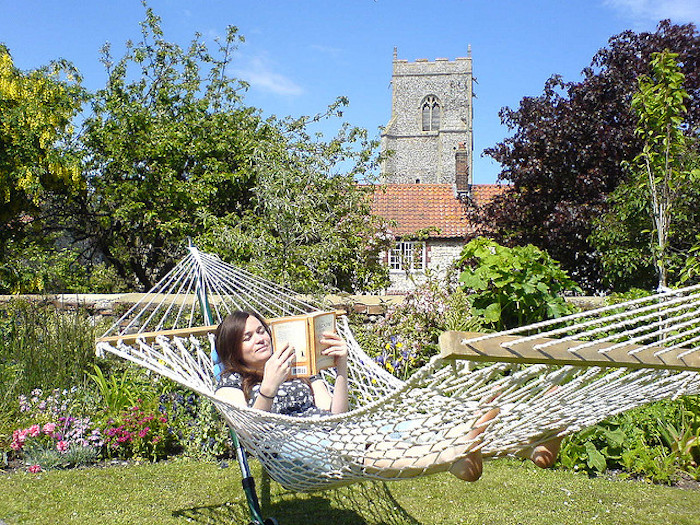 Susan was the first person I met in 2050. I’d wandered into a coffee shop near what was almost certainly a university campus (lattes were still on the menu). We struck up a casual conversation about the weather (very warm), and I innocently asked her, “What do you do?” I got a very quizzical expression. I quickly explained that I was visiting from another country and just wanted to know what kind of work she did. She said, “Oh, you must be on a travel sabbatical.” (I later found out this was a common practice in 2050, where people exchange places for periods of a month to a year instead of taking vacations in the traditional sense.) She told me she worked as a researcher and teacher at the university, but it quickly became apparent that people in 2050 didn’t define themselves by their jobs to the extent they do today and, at the same time, that their lives and their work were more fully integrated. For example, Susan explained that all of her current research projects were also courses that she was teaching. Teaching had become much more problem-based—learning by doing—rather than lecture-based. Students and faculty participated in research projects together, and everyone learned while attacking real problems. When I asked what department Susan was in at the university, I got that quizzical expression again. She explained that the university had become transdisciplinary. There were research (and learning) centers focused on particular problems, but the traditional academic departments had disappeared. She suggested that I come along to a seminar on the State of the World 2050 report that had just been released by the Worldwatch Institute.

As we walked through the campus, I noticed that the age distribution of the people we saw was much different than I’m used to seeing on university campuses. Instead of a mass of young faces punctuated by a few older professors, the population looked much more evenly spread over the full range of ages. Susan said that people in 2050 considered learning a lifelong activity and had the time to actually implement that idea. The seminar room was packed, and we arrived just in time to get seats at the back as things got underway.

The seminar began, and the speaker spent about an hour summarizing the report. These are some of the things I can remember:

As we left the seminar, I asked Susan about how governance worked these days. She said that the idea was that everyone should participate directly in decision-making at all levels, rather than delegating that authority to elected representatives. When I expressed some skepticism that this could ever be practical, she said that, indeed, it worked. It was a combination of people having more time to participate in politics, a better communications infrastructure using an advanced version of the Internet, a deep culture of participation inculcated from a very young age, and the general maturity of the whole system that I mentioned before.

Susan invited me to come over for dinner and meet her husband and children. I gladly accepted this chance to see how domestic life worked in 2050. Her house was an easy ten-minute bus ride and five-minute walk from campus. It was clustered in a group of about fifty houses, along with some shops and small businesses, in what she referred to as a village (even though it was in a large urban area). The village shared common green space, gardens, bike and foot paths, and a few other resources. All transport within the village was by bike or foot. She explained that (like most villages) they used an internal LETS (labor equivalent trading system) to keep track of shared labor services. For example, if I spent some of my free time helping paint somebody’s house, I would rack up “hours” that I could cash in to get help on some project of mine. Again, an overriding sense of calm and peace pervaded the place (probably due to the lack of car noise, which had been replaced by the sounds of birds chirping and children playing in the shared green space). Susan’s husband, Paul, and their two young daughters, Lisa and Jennifer, shared a three-bedroom house that seemed to be about average by today’s standards. In fact, Susan mentioned that the house had originally been built in 2001 and retrofitted with the latest energy technologies so that it actually produced more electricity than it consumed. By making almost all buildings part of the energy-production grid and by drastically reducing the need for transportation, the whole economy was now able to run on renewable, sustainable resources.

Susan had to back up Paul in his decision not to let the girls spend the night at a friend’s, and I inspected the books on their bookshelf while the girls threw a tantrum over this injustice (some things never change). After things settled down, we all sat down to dinner. I explained to the girls that I was on a “travel sabbatical” and was wondering what people did for fun in this part of the world. The answers were  similar to what you might hear today and included movies, dances, parties, and concerts. The only differences I noticed were that most of the activities mentioned were social—people seemed to spend more time interacting with each other, and less staying at home watching TV—and “shopping at the mall” did not come up as a favorite activity, even among teenage girls. In fact, I think malls had all but disappeared—replaced by a combination of Internet shopping, local village shops, and a general lowering of consumption levels. The dinner, for example, was almost all food grown in the village gardens (the avid gardeners in the village were racking up a lot of LETS hours), and the rest came from the village shop, which was a five-minute walk from the house. I asked if there were any big problems in the village and got a litany of typical neighbor complaints—one was drinking too much, another had too many loud parties, and so on. But in general, these problems were solved by talking with people at village events, rather than by calling the police (come to think of it, I don’t think I saw a policeman or heard a siren the whole time I was there). People hadn’t changed, it seemed, but the “system” had—and this allowed them to solve their inevitable problems in more mature, friendly, and productive ways.

As I left Susan and Paul’s house, I was thinking that it just couldn’t be this simple. There must be a catch. Wouldn’t all this social serenity require a suppression of creativity and initiative? How could people be happy and productive in an economy that wasn’t growing? But after thinking it through, it was clear that, in fact, it could easily work. Just like an individual organism that goes through a stage of early rapid physical growth followed by later “development” without further growth, a whole socio-economic system could do the same. And from personal experience, I can attest that the teenage years are often difficult and not as happy as later years, when growth has stopped and one can concentrate on the joys of development. I found that I really liked being an adult in this adult society.

Giorgos Kallis
How can we create a successful economy without continuous economic growth?