When I studied economics at university twenty years ago, the diagram below (fig. 1) was at the heart of every macroeconomics textbook—and it still is. The Circular Flow of Income shows households providing labour and capital to firms, in return for wages, rent, and dividends. They spend that income on goods and services, and so it goes round. The central question we asked was this: what makes income grow, and what could make it grow faster? 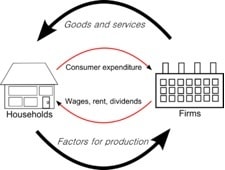 Fig 1. The circular flow of income.

Simple though it appears, this depiction of the economy as a closed loop of money and resources gets quietly lodged into the brain of every budding macroeconomist. And that’s a problem because it is fundamentally wrong.

As ecological economists have long pointed out, this circular diagram should at least be drawn inside a box labeled Environment.[1] Far from operating as a closed loop, the economy is embedded in, and dependent upon, the environment for providing resources and absorbing pollutants. The environmental damage done through ignoring this dependence comes into the story later as "externalities," to be handled on the sidelines.

But natural resources are not the only important flows hidden by this picture. Feminist economists have long emphasized that the monetary economy also depends upon unpaid caring work—carried out in the “reproductive economy”—in which mothers and wives (because it is predominantly women) raise children, and nourish and nurture workers so that they are ready to be productive each day. The monetized economy could not function without the reproductive economy, but the invaluable goods and services it provides are unpriced and unpaid, and so are ascribed no value.

Furthermore, by focusing on the aggregate flow of national income, the diagram is silent on how wages, rents, and dividends are distributed among households—and given the scale of inequality in many countries, that matters.

The focus on GDP growth is clearly long past its sell-by date: the global crises of environmental degradation and extreme human deprivation urgently demand a better starting point for economic theory and policymaking. So no wonder I got a huge rush of adrenalin the first time I saw the image of nine planetary boundaries (fig. 2 below). 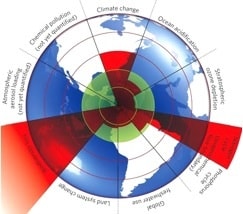 What’s going on here? In 2009, Johan Rockström of the Stockholm Resilience Centre, brought together a group of leading Earth-system scientists to identify a set of Earth-system processes—like the freshwater cycle, climate regulation, and the nitrogen cycle—which are critical for keeping the planet in the Holocene, the stable state that has allowed civilizations to arise and thrive over the past 10,000 years. Under too much pressure from human activity, any one of these processes could be tipped into abrupt and even irreversible change.

To avoid that risk, the scientists proposed boundaries to avoid the danger zone of each process (such as setting a boundary of 350 parts per million of carbon dioxide in the atmosphere to prevent dangerous climate change). Together, the nine boundaries form a circle, and Rockström and company have called the area in the middle “a safe operating space for humanity.”[2]

It’s a fantastically powerful idea. Where economics has fallen short, natural scientists have stepped in with a clear, quantified depiction of boundaries within which the global economy should operate—boundaries described not in monetary metrics, but in natural metrics fundamental to the planet’s resilience.

And yet something critical is still missing. This “safe operating space” may protect the environment, but it may leave millions of people facing extreme poverty and inequality. We cannot hope to achieve global sustainability unless we simultaneously pursue far greater global equity. So how about adding the concept of social boundaries to the picture? Just as there is an environmental ceiling of resource use, above which lies unacceptable environmental degradation, so too there is a social foundation of resource use, below which lie unacceptable human deprivation.

What kind of deprivations are we talking about? Human rights provide the cornerstone for defining that—but one indication of top priorities comes from the issues raised by governments in their submissions to the UN’s Rio+20 conference. They highlighted eleven social deprivations—such as lack of food, water, energy, voice, and social equity—so these make up the social foundation shown below (fig. 3). Between this social foundation and the environmental ceiling lies a space—shaped like a doughnut—which is both the safe and just space for humanity.[3] 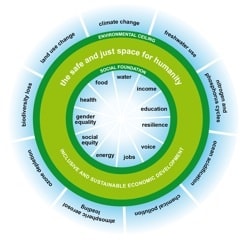 Fig 3. The safe and just space for humanity.

Rockström and co. had a first go at quantifying seven of the nine planetary boundaries (acknowledging huge uncertainties in doing so) and estimated that three have already been dangerously crossed: on climate change, biodiversity loss, and nitrogen use. At the same time, much of humanity is still living far below the social foundation: 13 percent of people in the world are undernourished, 19 percent have no access to electricity, and 21 percent live on less than just $1.25 a day.  It is an extraordinary indication of how deeply unequal and unsustainable the current path of global development is.

Now just imagine if this diagram of social and planetary boundaries found its way onto the opening page of every macroeconomics textbook. (That would be a very different starting point from the one I, and thousands of keen economics students, have encountered.) You want to be an economist? Then first, there are a few facts you should know about this planet, and the limits of human activity that it can take. You should also know about the human rights of its people, and the distribution of resources it will take to fulfill those. With these fundamental concepts of planetary and social boundaries in place, your task as an economist is crucial: to design policies, regulations, and markets that bring humanity between the boundaries and enable us all to thrive there.

Under this framing of what a successful economy looks like, the questions that economists ask would change radically. What constitutes economic development? Clearly, far more than a quarter-on-quarter increase in GDP. Inclusive and sustainable economic development requires three main shifts in focus:

These three fundamental shifts in economic emphasis would generate a much broader notion of economic development—and, if put into practice, they would have a far greater chance of bringing humanity into the safe and just space.

Would this kind of “doughnut economics” necessarily be post-growth economics? Not by definition: GDP could grow, so long as it remained compatible with staying within social and planetary boundaries. Whether or not this can be achieved in practice is another question: history doesn’t bode well, but economic possibilities may go far beyond our economic experience.

The future of economics as a legitimate tool for guiding human development depends on changing the starting point that economists adopt and the questions that they ask. Move over, GDP growth: we need a far broader conception of economic development in order to achieve global equity and sustainability. With the starting point of social and planetary boundaries, new perspectives on what constitutes economic success must emerge—and that can only be a good thing.

It’s time to rewrite the textbooks. Bring on the doughnut.

For a short video introducing the concept of social and planetary boundaries, and for the full discussion paper: http://www.oxfam.org/en/grow/video/2012/introducing-doughnut-safe-and-just-space-humanity

[1] Herman E. Daly, Beyond Growth: The Economics of Sustainable Development (Boston: Beacon Press, 1997); see especially the anecdote in the introduction.

Kate Raworth is Senior Researcher at Oxfam GB and author of the book, Doughnut Economics. Her research is focused on rethinking global economic development in the face of planetary boundaries and extreme global inequalities—including discussions of green economy, and new measures of development.