Doug Fogelson uses photography to raise critical questions about humankind’s relationship with the natural world. For his series Creative Destruction,he takes solitary walks through wilderness preserves and landscapes tangled with plant life, taking photographs on film that he later bathes in corrosive chemicals. The process draws vivid colors and crystallized patterns out of the emulsion and also deteriorates large areas of the negatives. Serene compositions become inky remnants that reflect both the complex beauty of our living planet and the environmental degradation caused by human industry. Fogelson scans the results in high resolution and enlarges them as digital prints. Ultimately, the photographs overlay the richness and spiritual depth that can be found in the natural world with the wondrous yet often destructive effects of human synthesis, making the two inseparable.

Return To Oblivion No. 10 (2015) is a color-soaked, 84-inch panoramic vista with optical effects that Fogelson has achieved not only through chemical alterations, but also in camera. He shoots with a Voigtlander Bessa roll-film rangefinder with a winding mechanism that has been modified so that he can partially advance each frame. Intuitively, as he walks, he exposes some square, singular images, like Ceaseless No.2 (2015), and others that overlap or abut one another, as in Return to Oblivion No. 10. The varied results are built from the pauses and movements of Fogelson’s body as he traverses the land, as well as from the spiritual and emotional undercurrents of his travels. Photography is a medium typically associated with still, instantaneous, and illusionistic representations, yet Fogelson’s process collapses multiple images and delineates the fluid way he perceives the multidimensional world. A reverie becomes a radioactive vision of the apocalypse, and time is not expressed as a fraction of a second, but rather as a continuum of change.

This continuum envelops Fogelson’s walks, and standing within the landscape enables him to look back through geologic time. Evolving over eons, the rich biodiversity of life on this planet is compressed in the DNA passed from one organism to the next, in the minerals that make up the earth’s surface, and even in our physical makeup and perceptions. Intrinsic to the awe of beholding natural phenomena is recognizing the magnificence of their complexity and the sublimity of their history. In nature, the ecological truth that all things are connected becomes palpable, and Fogelson’s images are in part an attempt to bear witness to the physical world in relation to his body and to symbolically fold his consciousness into time’s perpetuity. 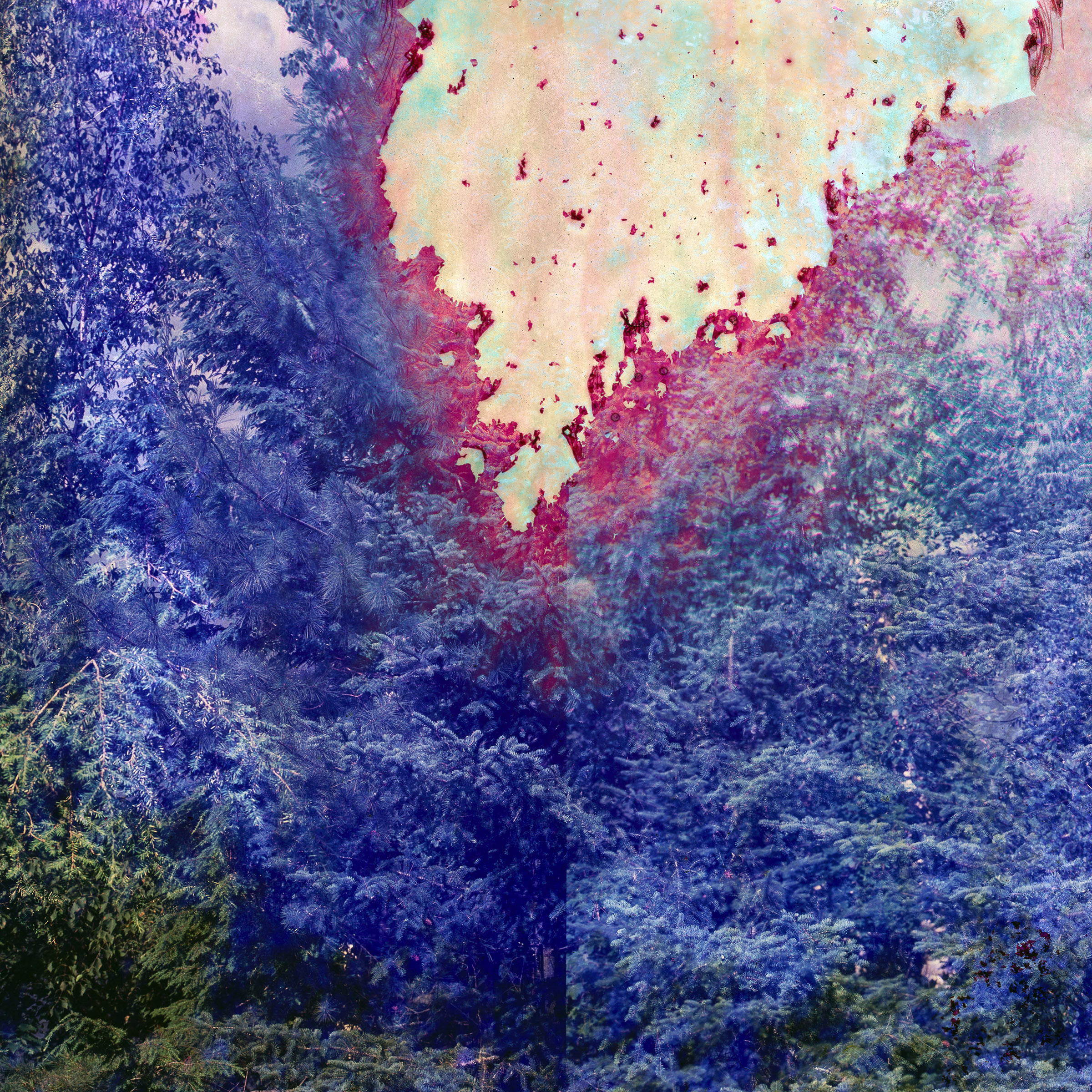 Yet cracked fragments and shadowy contours at times appear to lift off the page, and in the end, they obstruct Fogelson’s visualization of the continuum. While each base image unites past and present, chemicals have eaten away large portions of the negatives. What remains are settings that at times offer sparse clues about their original appearance and indicate a pivot point in history—a future where ecosystems are ravaged or nearly wiped clean by contamination, climate change, or nuclear disaster. When Fogelson looks at the land, he cannot help but see the encroaching threat of human induced ecological change.

Fogelson’s work both intersects with and deviates from the conventions of nature photography, which have antecedents that go back at least to the early twentieth century, when environmentalist-artists such as Ansel Adams and Eliot Porter created serene and widely popular visions of American wilderness. Adams and Porter presented nature as scenic, alive with complexity, free from human intervention, and able to be preserved. In their time, these artists’ works were incredibly compelling to the public as they worked hand in hand with conservation organizations to publish books and lobby the government to create new national parks. Today, as we confront the shadow of a new epoch known as the Anthropocene, their visions remain widely copied, yet seem woefully naive.[1] We are in an era when the influence of human behavior on the earth’s atmosphere is so significant that many scientists believe it constitutes a new geologic period. In Fogelson’s eyes, the natural world is laden with knowledge of a not-so-distant future where the composition of the earth and the diversity of the species it contains are permanently altered.

Philosopher Timothy Morton uses the term “future future” to consider the experience of living in an era when we must imagine human-induced, dynamic ecological change reshaping the planet as we know it. He writes, “The future future opens: a future without us. A future in which an object like radioactive waste lasts longer than the time stretching all the way back to places such as the Chauvet Cave with its Paleolithic paintings.”[2] Here, Morton touches on a critical aspect of Fogelson’s work: that while our mind possesses an incredible flexibility to merge great spans of time, going all the way back through cave painting and even evolution, we struggle to process the physical, psychic, and spiritual ramifications of massive environmental alteration and erasure. The future future is to Morton what Return to Oblivion, a title that appears many times in this series,is to Fogelson. The magnitude of the change indicates a vague, unknowable, invisible reality, one sealed from human perception. It is our earth impacted by us, yet without us.

We know this future world not through unaided observation of the land, but rather through sophisticated technologies used by scientists to model climate patterns and measure long-term environmental degradation. Mindful that close observation can yield new conclusions, Fogelson mines his photographs for deeper insights into the nuances of physical destruction. Using computer software to enlarge his negatives, he draws out details that would otherwise remain hidden to the naked eye. His fragile strips of film become stable, larger, digitized, and more provocative. At the same time, their materiality is compromised, and metaphorically they are further distanced from their original creation. The images evolve, in this last step through technology, and they mirror the ongoing acquisition of knowledge—and the creative destruction—that define human history.

Photo credits: Images by Doug Fogelson used with the permission of the artist.

[1]. For further discussion of the changing meaning of Porter’s work, see R. Solnit, “Every Corner Is Alive: Eliot Porter as an Environmentalist and an Artist,” in Eliot Porter: The Color of Wildness, ed. Phyllis Thompson Reid (New York: Aperture Foundation, 2001), 113-31.

Doug Fogelson studied art and photography at The School of the Art Institute of Chicago and Columbia College Chicago. His work can be seen at dougfogelson.com.