The question of how well democracy is suited to dealing with serious environmental problems has always been a fundamental one for environmental political theorists. After early flirtations with ideas of eco-authoritarianism (in the ’60s and ’70s), thinking tended to coalesce (especially from the ’90s on)—in theory as in the practice of Green political parties and movements—around the possibility of developing more participatory and deliberative democratic forms. But the basic problem, in view of environmental crisis, is that effective measures to deal with it may not be what people democratically decide to commit to.

The heart of the problem is that to deal effectively with deleterious environmental change—of which climate change is an extreme manifestation as well as further cause—requires long-term planning and long-term (collective) commitments; it can mean deferring benefits, and thus making sacrifices in the shorter term; it particularly means being careful about discounting the future. Such requirements are likely to be less popular in the short term than their alternatives; therefore, democratic candidates committed to action on climate change are going to be less popular to electors than their opponents. (Thus witness how, in recent campaigns for the job of most important democratic politician in the world, Obama did not appear to have much more to say on the subject than his opponent.) As long as climate-change action is perceived to involve sacrifice, and as long as making sacrifices is unpopular, the democratic mechanism of government is unlikely to produce leadership that will be seriously committed to climate-change action. And yet some steps have been taken. How is that so, and can they be taken further?

For part of the answer, we should note that it is not only environmental issues that pose a challenge between immediate individualised preferences and longer term, more reflective and collective conceptions of what is best for a society. Wider lessons of three kinds can be adapted. First, even within the liberal tradition, the importance of constitutional bulwarks against tyranny of the majority is well recognized; secondly, from the republican tradition, values of social virtue claim an important place. We can learn from both views about how a democracy is not merely a mechanism for electing governments but more importantly a type of society.[1] However, a further strand of thinking will also be required—one that links thinking about democracy within established nation-states with values and institutions of global justice.[2]

Constitutionalizing environmental protection is arguably of fundamental importance for a democratic approach to the challenges of climate change. Indeed, today it seems no longer to be controversial whether constitutions should say something about the environment—as they all these days seem to. This can integrate with more established protections related to lives and livelihoods. It might be in the form of rights,[3] but need not be.[4] Indeed, responsibilities and commitment of whole societies are of crucial importance. Constitutionalizing environmental protection should not be regarded as a panacea, and some theorists caution about removing this matter from the vicissitudes of ordinary political decision making.[5] Even critics concede it may play a part, though, and there seems good reason to think it can serve a constructive role in ratcheting up the standards of environmental protection that nation-states severally and in association observe.[6] In doing so, it also helps maintain some political control over those forces of unbridled markets that tend to drive a “race to the bottom” in environmental and other matters of common social good. But, of course, none of this will be sufficient. 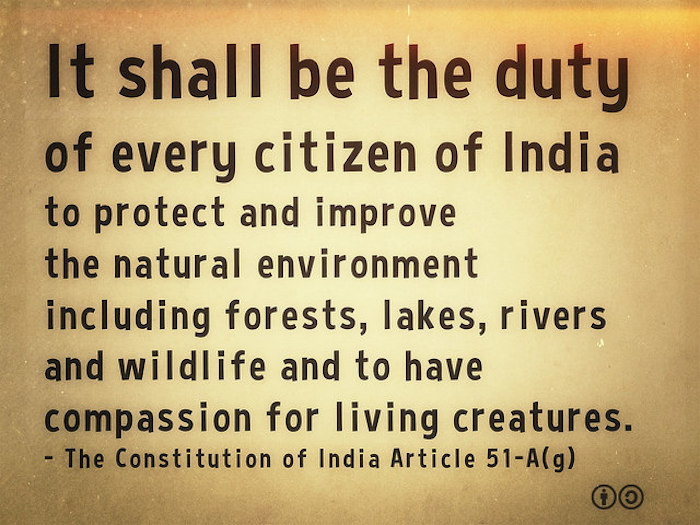 Environmental enlightenment of citizenries is a complementary requirement if environmentally protective politics are to be pursued. In fact, prominent in theory and practice in recent years has been the idea of environmental or ecological citizenship.  In part, “environmental citizenship theory seems to reflect a growing social concern with personal environmental responsibility.”[7] Scerri notes that a relatively cohesive literature tends to suggest “that sustainable development requires shifts in attitudes at a deep level,” such that it can open up “the possibility of checking self-interest against the common good in systematic ways.”[8] Some emphasise how this develops out of the civic republican tradition and its emphasis on virtue ethics. And again, the reasons for optimism should not be overstated: Karlsson cautions about a “voluntarist turn,” for instance, and he is also skeptical about ideas of an ethos of resourcefulness, self-reliance, and self-restraint[9]—a point echoed by Arias-Maldonado’s observation “Franciscanism is not the way out!”[10] But appropriately cautious, a more dialectical view[11] can reveal that this approach need not be incompatible with more constitutionalist approaches that emphasise procedures and rights.

Environmental constitutionalism and environmental citizenship, then, are key aspects of a democratic response to climate change. Both tend to presuppose, however, that a functioning democracy is in operation and available for greening. If some states provide modestly encouraging examples—for example, within the EU and particularly Scandinavia—the larger problem is that most of the world is less democratic and has a good deal less economic wealth with which to support such approaches. Those approaches might enable those of us in affluent parts to democratically constrain ourselves to do what is best for the common good, while also providing positive encouragement and opportunity for us to act for the best. But it is also necessary to recognize that those who are advantaged by the current global order have to further restrain our demands on it even as others are increasing theirs, in order to have a basis upon which to work together to harmonise demands in the longer term. Critics of both approaches challenge the assumption that there are monolithic or universal environmental values to appeal to globally.

Global justice, therefore, is arguably the single most important condition of any effective democratic response to climate challenges. For many in the world today, climate change is not a future threat but a very present deprivation of access to adequate means of a decent life; increasing “ecological marginalization”[12] is befalling growing numbers as the more affluent increasingly occupy the diminishing amount of “ecological space” available on this crowded planet. If awareness of this present injustice does not suffice to motivate greater environmental concern among current beneficiaries of the global economy, then perhaps the thought that a similar fate—and perhaps ultimately an even worse one—lies in store for our own grandchildren and their children could do so. But among the present obstacles to such awareness, and such motivation, is the quality of knowledge that flows through the body politic of modern capitalist states today. While paying lip service to the value of democracy, the dominant communications in a society like the United States today seem intent on reducing its meaning to the unbounded and blinkered pursuit of individual gratification. Democracy was held in disrepute for most of Western history because of its association with mob rule; real democracy is for grown-ups who think and act responsibly together in the interests of all. The serious threats that climate change brings need a grown-up response.

So a final word—given that this is to be published on Inauguration Day—has to be the hope that the world’s most important democratic politician, who in so many other ways has exemplified a grown-up approach to politics, takes as seriously as it merits the challenge posed by actual and impending climate crises.

Tim Hayward works in the fields of political philosophy and environmental ethics. At the University of Edinburgh, he is Professor of Environmental Political Theory and Director of the Just World Institute; currently, he is also the departmental Head of Politics and International Relations.

Vandana Shiva
Can democracy in crisis deal with the climate crisis?

Democracy in the Anthropocene

Peter G. Brown
Can democracy in crisis deal with the climate crisis?