Can our democracy deal with global warming?

The early returns would indicate that the answer is no. We’ve known about climate change for a quarter century, and so far we’ve done all but nothing. Last summer, as the United States suffered through the hottest year in its history, with a drought that recalled the Dust Bowl, our presidential candidates campaigned in apparent oblivion. It’s like they were astronauts, with climate-controlled suits, who simply didn’t notice that things were getting hot. In the wake of superstorm Sandy, New York’s Mayor Michael Bloomberg and Governor Andrew Cuomo were given enormous credit for acknowledging the bare existence of climate change, as if this demonstrated great political courage. It actually demonstrated a regression from, say, 1988, when George H. W. Bush, campaigning for president, scored points by promising to “fight the greenhouse effect with the White House effect.”

We’re not doing much better globally. The United Nations wrapped up its latest exercise in climate diplomacy in Doha, Qatar, the city with the planet’s highest per-capita carbon emissions. Three months earlier, our leading climatologists had declared a “planetary emergency” after watching the Arctic melt fifty years ahead of schedule. You would think that dealing with the disappearance of the planet’s major physical features might fall within the brief of the UN, but it apparently did not, since it didn’t seem to ruffle anyone unduly.

One could despair, and one probably should. But I’m not quite ready, because I don’t think all the available avenues of democratic influence have been tried.

We’ve done the obvious one, the one that should have worked. Beginning in the late 1980s, the planet’s scientists have trooped up to our various parliaments and legislatures, year after year, to point out that the planet is in unprecedented peril. And the planet’s economists have, with rare unanimity, explained what should be done about it: a serious price on carbon that reflects the damage the stuff is doing in the atmosphere. Had we started early on, the price could have been small and ramped up slowly; it wouldn’t have been a simple transition, but it would have been possible. You can see that for yourself in the one large country that actually made serious policy. Germany, where the Green party was able to use the leverage a parliamentary system provides, is well on the way to a renewable future—its economy intact, and its citizens living not in caves but in … houses with solar panels on the roof.

So that’s how it should have gone. Warning, consideration, reaction. Rational people expected this to work because it was … rational.

But they’d reckoned without the overwhelming power of the fossil-fuel industry, the richest enterprise the planet has ever seen. They’ve used every tool at their disposal to make sure nothing changed, from funding disinformation campaigns to buying legislators. To give just the smallest example, from one election in one country, Chevron made the largest post-Citizens-United corporate donation two weeks before the 2012 election, dropping millions of dollars on Congressional races. A few weeks after the election, Chevron’s CEO said in an interview that government leaders were consistently choosing cheap energy over greenhouse gas reductions. Talk about a closed circle. And just for jaunty effect, he added, “it’s not my call.”

So we clearly need to go to the backup plan. If simply making rational sense about climate change doesn’t produce action, we need to wield some power of our own. We obviously can’t compete in the same currency the fossil-fuel industry uses: Exxon has earned more money each of the last five years than any company has in the history of money. But that doesn’t mean we’re without resources—we have the currencies of movement. Passion, spirit, creativity. With them, perhaps, we can assemble enough power to make something happen. 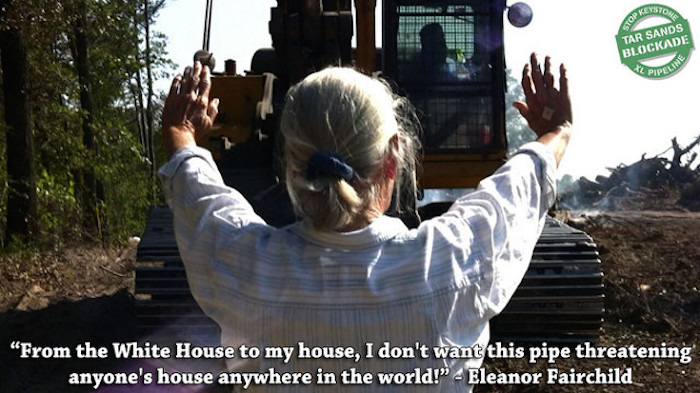 Consider the fight against the Keystone Pipeline from Canada’s tar sands to the Gulf of Mexico. As the president’s former green jobs czar, Van Jones, has said, it was a “done deal” in DC, until people staged the largest civil disobedience action in this country in 30 years. That was enough to persuade the president to delay it for a year. It may well still be approved, but not without a fight—we’re headed back to Washington over President’s Day weekend for what will be the largest environmental gathering in decades.

Meanwhile, the fight is spreading to college campuses—at 192 colleges, students are demanding divestment from fossil fuel companies, in an effort to weaken their political power. They understand that these companies are the enemy to their future, and so the heat is starting to increase.

And it’s not just America. In June, young people from every country on earth will gather in Istanbul in an effort to shame the UN into action—they’re busy planning national campaigns to force their democracies (and monarchies and politburos) to do something fast.

If you were betting, you’d bet we’re going to lose. And maybe we will—the other side has immense power. And all it needs to do is stall—a few more years of inaction and they’ll have put enough carbon in the air that it won’t make much difference to what follows. But it beats trying the same strategy that hasn’t worked for a quarter century.  Maybe, somehow, we can shake things up enough that the system will need to respond.

Constant shaking should not really be required to get systems to work. But given the stakes, we’ve got to try. And there are days when it seems possible to me. People sometimes think that protest and civil disobedience are not “democracy,” but in fact they are sometimes its logical necessary extensions. I remember being in jail in DC after the first big Keystone protest, in the cell next to my old friend Gus Speth, the former head of the president’s Council on Environmental Quality and of the United Nations Development Program. “I’ve held a lot of important positions in this town,” he said through the bars of his cell. “But none of them seem as important as the one I’m in right now.” Indeed. Sometimes that’s how democracy has to work.

Bill McKibben is the author of a dozen books about the environment, beginning with The End of Nature in 1989, which is regarded as the first book for a general audience on climate change. He is a founder of the grassroots climate campaign 350.org, which has coordinated 15,000 rallies in 189 countries since 2009.