The heated U.S. 2016 presidential election is over, but the resulting political polarization has brought forth fresh concerns over democracy’s ability to heal this country’s many social, economic, and environmental ills. Worldwide, socio-economic and political orders are coming under more scrutiny; citizens are expressing greater discontent with the credibility of governmental leaders; and voters are increasingly dismissing the status quo and seeking new forms of governance. Additionally, there are real concerns about whether democracy as a system of government is fundamentally capable of addressing the very palpable climate crisis.

To date, democracy has seemingly failed in this arena; the Kyoto Treaty, the United Nations summit in Copenhagen, and the Paris Agreement are some of the most publicized political breakdowns.

Ideally, democracy expresses the will of a population. Perhaps, then, an essential question is whether the voting body of a democracy is willing to accept limitations on energy use and the other sacrifices that are required in order to mitigate the damage of climate change. Can democracy help “the people” overcome the impulse of instant self-gratification and set aside adversarial relationships in order to constitutionalize environmental protection and promote global justice? Is our system of democracy underequipped to deal with a problem of such global scope and serious consequences, or is there hope that, with some reflective imagination, democracy may overcome one of the gravest threats facing humanity? 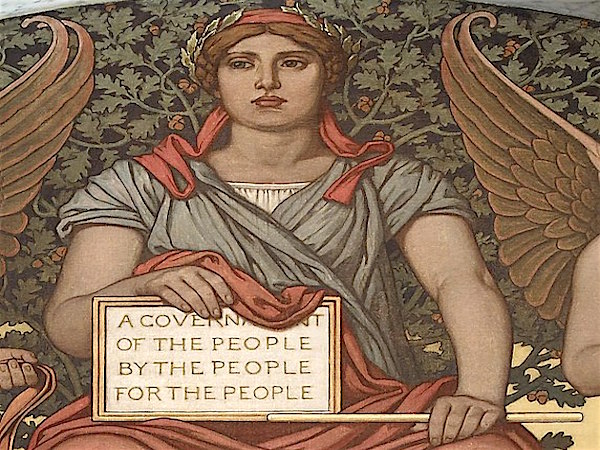 Political institutions are in a critical moment with respect to climate change, and though the stakes are high, there is an opportunity to reimagine our roles as deeply engaged and informed citizenry in a deliberative democracy. The Center for Humans and Nature has joined this conversation on reimagining democratic governance in the face of climate change by asking the question, “Can democracy in crisis deal with the climate crisis?” As part of this series, the Center invited diverse contributors from across disciplines to share their ideas on the connections between rejuvenating the democratic process and addressing the climate crisis. Contributors include Bill McKibben, Vandana Shiva, Hans Joachim Schellnhuber, Benjamin Barber, Daniel Aldana Cohen, Robyn Eckersley,Michael Menser, Carol Gould, and Peter G. Brown.

In their essay responses, these contributors addressed the following issues at the heart of this question:

The Center’s mission is to explore and promote our human responsibilities to nature—the whole community of life.[1] And part of this responsibility is to reimagine the energy path we are currently on that is creating an untenable lifestyle for us all. This process of reimagining is essential because our culture currently rests upon several flawed premises: that humans are separate from nature; that nature is merely a raw material for human use; and that it is acceptable and “natural” for humans to exert unlimited control over nature. Such presumptions result in a social self-understanding derived largely from consumption, competition, and self-interest. In addition, the typical solutions offered by political institutions to correct our social and ecological challenges are myopic, reductionistic, and driven by short-term thinking.

Now more than ever, we as a social species require new and imaginative approaches to sustainability, progress, growth, wealth, governance, and the common good. Our human economies and communities are utterly dependent upon and intricately embedded within the natural world and subject to Earth’s very real ecological constraints. This very fact demands that we live our everyday lives and plan our future world governance in a way that shifts our current socio-economic and political trajectory toward a path that values the well-being of the whole community of life. The question then becomes, is democracy nimble enough to help us move toward a more interconnected and sustainable worldview

Dive deeper into the question “Can democracy in crisis deal with the climate crisis?” by exploring the diverse approaches our contributors take, then join the conversation by sharing a contribution of your own.

[1] . Center for Humans and Nature, “Mission and Values: The Center’s Mission,” at http://www.humansandnature.org/mission-values; accessed July 30, 2017.

Kevin Clark is the Center's Web Developer where he collaborates with Center staff to improve usability and enhance the functionality of HumansandNature.org. Kevin also has worked with the University of Illinois Extension Office and with the Garfield Park Conservatory Alliance.