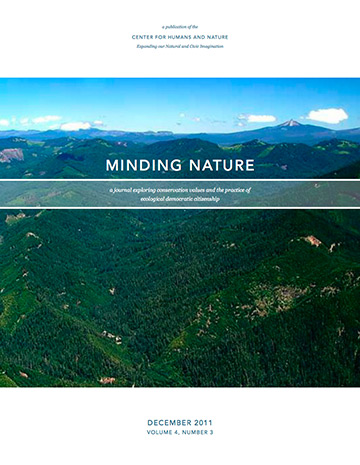 Natural systems have functional limits; human actions have systemic consequenc­es. What part of that don’t we understand? Not much, actually. In truth, most human be­ings most of the time do understand this in a mul­tiplicity of ways—cognitively, scientifically, expe­rientially, ethically, and emotionally. They do so not only because of the advance of science, litera­cy, and education, but also because it is knowledge deeply ingrained in ordinary human experience itself, our fundamental encounter with the world as metabolic creatures.

An Introduction to “The Blue River Declaration”: An Environmental Ethic and a Thinking Community

Among the ancient, moss-draped Douglas firs at the H.J. Andrews Experimental Forest in the Oregon Cascades, twenty-three people gathered to take seriously the task of penning an environmental ethic appropriate for our time.  We were philosophers, scientists, writers, poets, students, and professors of various bents.  Over four intense days we thought collaboratively and open-mindedly, we learned from one another, and we worked hard to create something together none of us could create alone.

The Blue River Declaration: An Ethic of the Earth

A truly adaptive civilization will align its ethics with the ways of the Earth.  A civilization that ignores the deep constraints of its world will find itself in exactly the situation we face now, on the threshold of making the planet inhospitable to humankind and other species.  The questions of our time are thus: What is our best cur­rent understanding of the nature of the world? What does that understanding tell us about how we might create a concordance between ecological and moral principles, and thus imagine an ethic that is of, rather than against, the Earth?

The Historical Sense of Being in the Writings of Aldo Leopold

The American conservationist Aldo Leopold (1887–1948) gave much thought to the relationship between humans and nature and how human society can operate in a manner attuned to the principles of ecology.  Having worked in different positions on the frontline of conservation, he was alarmed at the thoughtless destruction of the biophysical landscape and the mental dissociation from the natural environment that were brought about by changes in both rural and urban life and by modern developments in economics and technology.

What is civic agriculture? Throughout the United States, farmers markets are proliferating, Community Supported Agriculture (CSA) businesses are gaining members, and vegetable gardens are being planted at schools, in neighborhoods, and even at the White House.  Best-selling books such as The Omnivore’s Dilemma and Fast Food Nation, as well as film documentaries like Food, Inc., have brought food-related issues and concerns into popular consciousness, spawning a discussion that transcends of-the-moment dietary fads, such as Atkins or South Beach.

In Search of the Ethics of Place

In Grounding Knowledge: Environmental Philosophy, Epistemology, and Place, Christopher Preston has two goals—one he accomplishes, and one he does not.  I wish he had accomplished both, for both are important. Preston’s first goal is to establish that physical places are both epistemologically and morally significant.  In other words, where we are influences how we think, and what we should be and do.  He begins his book with a thorough explanation of epistemological history, from Plato to post-modernism.