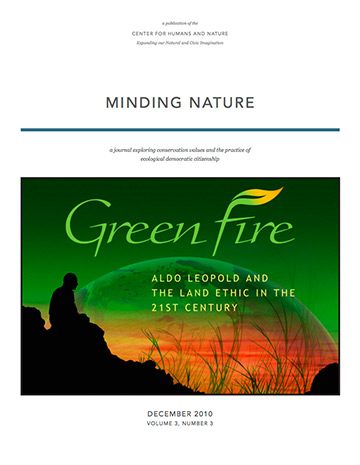 The Wisdom of Conservation

To bring together a diverse group of reflective, articulate thinkers and focus their vision and voices on an enduring theme is a fascinating publication project. Such a venture is not without risk; some attempts have been dreadful—how many compilations are there that might be entitled Banalities of the Rich and Famous? Occasionally, however, such collections succeed spectacularly. One nice example of this genre, a volume entitled Living a Life of Value, edited by Jason A. Merchley, came to my attention a few years ago.

Connecting Why to How

Ethics is not a luxury—so environmental ethicist Michael Nelson emphatically reminded those attending the inaugural Chicago Regional Forum on Ethics and Sustainability last October. Nelson noted that ethical discourse on decision-making—the (frequently unstated) “ought to’s” of policy, law, science, economics, and so forth—most clearly emerges during challenging times and is an inescapable part of being human. Do it well or do it poorly, but all people live, move, and have their being in an ethically charged world.

The Perfect Moral Storm, When the Life Rafts Are on Fire

The climate crisis and its attendant environ­mental disasters have caught the world in the dangerous crosswinds of ecological dis­ruption and human irresponsibility. We are challenged to make world-altering decisions about our current life choices and our obligations to planetary and human futures. But when philosophers race across the pitching deck to launch the moral theories that we have long relied on in times of difficult choices, we find that the life rafts themselves are on fire. It is possible to argue that among the coming casualties of the climate change crisis may be Western ethics-as-usual.

In his influential essay “The Land Ethic,” completed in the final year of his life, Aldo Leopold summarized the lessons he had learned across four decades as a conservation scientist, advocate, practitioner, and teacher.  Leopold argued that the next phase of human ethical development must include expanding our sphere of moral concern to encompass the land. Only through such an expanded ethic, he held, could human and natural communities, in all their diversity, productivity, and beauty, func­tion well and thrive together over the long run.

Toward a Deeper Bioethics

Relationships and stories are essential to the human condition—people and ideas relate to each other, and narrativizing these relationships can create “true” myths important for human survival.  The topic is personal—my relationships with four environmental thinkers and activists, and with metaphors of earth-changing proportions.  Aldo Leopold, Van Rensselaer Potter, Arne Naess, and Rachel Carson inspired me to not only “think like a mountain” and then to embrace my feminine side and “feel like water,” but to act boldly in the real world.

“Without memory there is no debt,” writes Mar­garet Atwood in her 2008 book Payback—a series of lectures that explores debt as an imaginative con­struct. If the construct of debt requires memory, At­wood reasons, “debt [also] involves a plot line,” that is, a string of actions occurring over time, beginning with a handshake and heading toward a due date. It is increasingly evident that the human economy is reversing some of Earth’s long-term trends.

South Carolina’s seacoast—some two hundred miles of beaches, estuaries, natural harbors, and maritime forests—is a financial blessing to the state. Year round, vacationers, eager to bathe in the sun and surf, fill the hotels, condomini­ums, campgrounds, and beachfront homes. Visitors who combine short business trips with golf and fish­ing often return to their northern homes already shap­ing plans for migrating to this American Cote d’Azur, with its temperate climate and secure gated commu­nities.

The Regulation of Synthetic Biology: Comments to the Presidential Commission for the Study of Bioethical Issues

I have been writing and thinking about the cultural meaning and reception of biotechnology generally, including synthetic biology, for the past several months. I would like to share the following comments with the Commission. Policy and regulation in the area of synthetic biology—as in most areas of technology and science policy and governance—will focus primarily on public safety and harm issues. Secondarily, it will focus on discrimination and equity issues if it seems to put some group of society unduly and yet be developed at public expense.