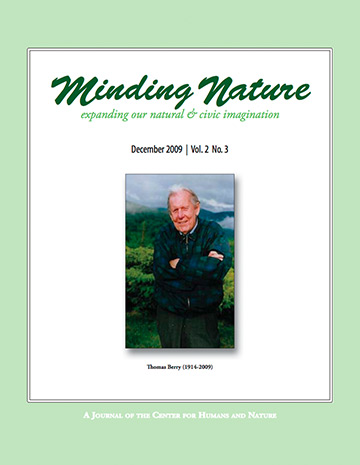 Hamlet at the Helm

The news from Denmark is not encouraging. The King’s claim to the throne rests on dubious moral foundations. The Prince vacillates, desperately trying to ferret out the truth before he acts, seeking political resolve in epistemological certainty. Courtiers jockey for position and advantage. Meanwhile the people and the land groan under the weight of a disordered state and injustice. Catastrophe and barbarism are massing forces near the border.

There is No 'Last Word'

I begin with a caveat, one given by Wendell Berry this past October to a crowd of 2,000 gathered to hear him read some of his writing in Madison, Wisconsin. “There is no Last Word,” Berry said. In that spirit, I offer these thoughts.

On Saturday, July 14, 2007, roughly twenty residents of Briceville, Tennessee (formerly known as Coal Creek), along with volunteers from nearby Knoxville, gathered for the 2007 Annual Coal Creek Summer Bug Hunt. Those from Knoxville were members of the local chapter of Trout Unlimited (TU) and the Coal Creek Watershed Foundation (CCWF). By counting fish, invertebrates, and assessing water quality, they were gauging the success of their efforts to restore a degraded stream and improve the health of the entire watershed. For seven years, their work in the Coal Creek watershed had ranged from stream clean-ups to stream bank stabilization, and native species restoration to community education and advocacy.

Can Psychology Help Save the World?

In thinking about how to address environmental challenges, many people overlook the relevance of psychology. But whether we focus on causes of the problems or on their consequences, people are relevant: human behavior, human attitudes, human well-being, and human interactions. The field of conservation psychology has arisen in an attempt to integrate and publicize the psychological theory and research that are relevant to understanding and promoting the connections between humans and the natural world.

Beyond the Social Contract of Consumption

I begin with the premise that eventually—soon, within two generations at most—natural limits will require radical transformations in human institutional structures, cultural traditions, and individual behavior. These transformations will affect the freedom and material standard of consumption of billions of people in the most powerful countries (economically and militarily) in the world today.

To fully understand Thomas Berry’s presentation of the New Story it is helpful to highlight some of the major intellectual influences on his life and thinking. In this way we can more fully appreciate the nature and significance of the New Story itself. In this intellectual biography we will first discuss Berry’s studies of Western history, Asian traditions, and indigenous religions. We will then describe the early and sustained influence of Pierre Teilhard de Chardin on Berry’s philosophy of evolutionary history. Finally, we will outline some of the major features of the New Story as Berry has described it.

Rather than one image of Thomas, I hear his laughter. That sound activates images from our first meeting in 1968 all the way to the week before he went, as the Crow Indians say, to the “other-side camp.” When I met Thomas, I was unsure how to name him because he was a “fatherly priest,” a “doctorly academic,” and a “mister” to whose discipline I was submitting myself. No problem, as I found out, he simply said: “Call me whatever you want.” This was not a teacherly trick to bring me to my own voice—well, it was that, too—but more important to me, it was an opening to friendship.

We welcome you today to this special Cathedral, a place of such beauty and grandeur that it beckons us to a larger life journey. It calls us, as did Thomas here on many occasions, to the journey of our greater self toward new human–Earth relations. This is the journey that Thomas invited us into and it is why we celebrate with one another as fellow travelers.

A Conversation with Thomas Berry

It feels, and indeed is, impossible to write down these words without singing the words to the Byrds’ tune, “Turn, Turn, Turn,” which is based on the book of Ecclesiastes. In fact, I had to put down my pen and sing them. They feel rejoiceful, to turn my own phrase.

The environmental movement has always needed constructive criticism. When Ted Nordhaus and Michael Shellenberger’s article, “The Death of Environmentalism,” was published in 2004, I suspect many people read it, as I did, hoping for insightful analysis and direction. I was intrigued by the garish overstatement of the title and hoped at least for an iconoclastic rant in the vein of the ever-entertaining and occasionally visionary James Kunstler (The Geography of Nowhere, The Long Emergency, et al.).