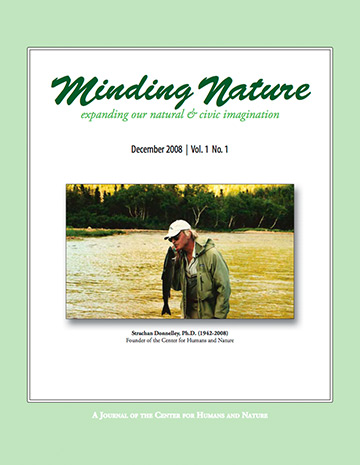 The Center for Humans and Nature operates under the premise that humans can achieve a sustainable relationship with nature only by aligning their values and consciousness with earthly realities. It sounds simple, even logical, but then again, what are those earthly realities? This fundamental question was what sparked our founding President, Strachan Donnelley, to embark on a journey to explore “the many values and moral obligations pertaining to humans and nature, and to take nature seriously as a moral and civic . . . concern.”

Wake Up Call: The Editorial Purpose of Minding Nature

Aldo Leopold said that a thing is right when it tends to preserve the integrity, stability, and beauty of the biotic community. When I was a young teacher in the 1970s, I thought that we were beginning to take seriously this notion of a “biotic community”—nature alive, not simply matter in motion; a community of life and living of which human beings are not outsiders, but dependent insiders.

I represented the Center for Humans and Nature (CHN) at the Fourth World Conservation Congress, of the International Union for the Conservation of Nature (IUCN) on October 5th–14th in Barcelona, Spain. IUCN is the world’s oldest and largest global environmental network. It is a democratic member organization, with a membership of over one thousand government and non-government organizations. Although CHN has been a close partner with IUCN for many years, CHN became a formal member in 2008.

CHN at Work: Bringing Perspective to the Biofuels Debate

During the growing season of 2006, large financial and political forces lined up in a manner that made it plain, to promoters and critics alike, that corn-based ethanol was becoming a transformative force in the agricultural landscapes of North America. A juggernaut was beginning to move—with few ethical “rules of the road” to guide it, and all too little appreciation of the need for such rules.

Complex environmental processes like global climate change pose intricate and challenging adaptation, mitigation, and regional planning issues. Like all cities and regions, Chicago is vulnerable to the effects of climate change and faces its own specific risks and challenges. It must engage in appropriate planning now to be prepared for the changes that lie ahead.

Making the Earth Covenant at Chicago

We are in the midst of a massive renegotiation of moral relationships and boundaries. Everywhere we turn we hear reports of agreements made and agreements broken; trust and betrayal; new promises that give us hope countered by conspiracies that send us into despair. We are struggling to set more ethically justified and enduring terms for human relationships, from the most intimate to the most public—from marriage vows to international law.

A World on the Way

James Gustave Speth pulls no punches. In his latest book he takes us to the dangerous, cold heart of our environmental crisis. Like a good doctor, he knows that we must diagnose what ails us before we can undertake an effective treatment. It is truly difficult to stop underlining passages in The Bridge at the Edge of the World. Like this one, for example . . .

The Board and Staff of the Center for Humans and Nature are deeply saddened by the death of the Center’s Founder and President, Strachan Donnelley, Ph.D. (1942–2008). Strachan combined several vocations as a writer, an educator, and a builder and supporter of organizations in service to the common good. He was at once a conservationist, philanthropist, and philosopher; and he was also a man of remarkable love, dedication, and care for his family, friends, and colleagues. Fly fishing and music were Strachan’s passions and Verdi’s Requiem, his anthem.