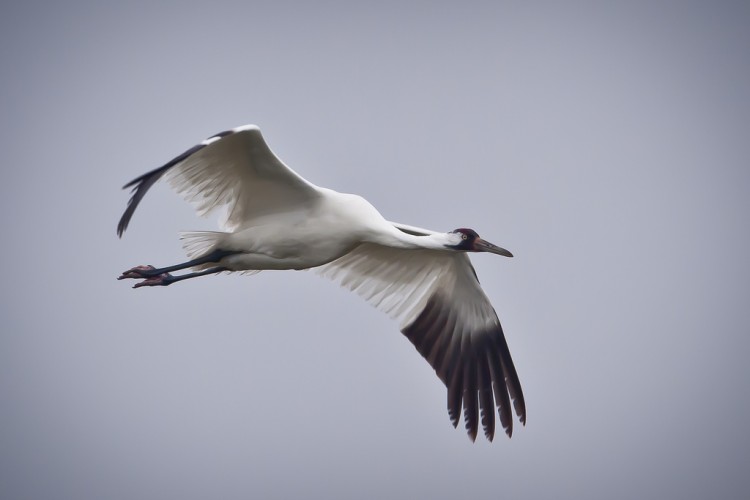 The encounter hasn’t happened yet. It may still not happen, though I doubt that. Now that I know the signs, the chances are improving. Perhaps the previously unthought of, unthinkable encounter, now imagined and hoped for, has emerged from the land of no-chance and hesitates at some marshy, undefined border between the kingdom of chance and the realm of probability. It is the whooping crane I speak of, a bird, to repeat myself, I’ve never seen, but owing to the ancient modes of voice and text and the newer ones of video and Internet—made possible by quantum mechanics, a subject to take on faith—I can imagine I’ve had an encounter with an imagined bird.

One could imagine, or pretend one has done this—seen the bird in the air, I mean—which would turn this post into fiction. I, or anyone really, could describe with some precision the bird’s rare beauty: its snowy plumage accented by the black of the fringe-y wingtips and jaunty red crown, the elegant neck, spindly legs, height, preference for marshy wetlands, how it dances, how it rears its young, how it’s been brought back from near extinction… To think of the last opens the same door into gratitude opened by such things as Beethoven’s late quartets, examples of true non-violent heroism, thinking about cosmology or observing the complexities of a sunny hour in a savanna. Quaker cosmologist George Ellis posits that deep ethics—the ethics of emptying the self for the freedom of others, also known as kenotic ethics—are part of the invisible structure of the universe, there to be discovered, like math or the laws of physics; they don’t go away just because one or another group of humans ignores them for awhile. So, too, gratitude in this case, that so many humans have devoted so much of their lives and specifically human talents and attributes (if this specificity be considered as being an outlier zone along a continuum)—and love—to saving an ancient species of bird.

Thinking about existence, for me, requires an oblique approach. The concept itself slides around between big abstractions and narrow definitions; besides which, much of what we experience as and consider in fact to be hard reality, that which exists, depends on faith in unseen things. As William Gibson has pointed out in an essay about the Internet (“Googling the Cyborg”), just because you can’t touch or see something (for example, photons) doesn’t mean it’s immaterial. Conversely, if you see a picture of something, is the actual subject still unseen because it is not immediately physically present?

Very roughly two thousand years ago, people belonging to a late Woodland/early Mississippian culture made pictographs of flying birds of many species in some caves in Tennessee. These people apparently were not part of the dominant, bloody, death-centered Southeastern Ceremonial Complex. Their art seems to be inspired by a different relationship to nature. Were the artists depicting animals with spirits, spirit animals, or both at once as thought-forms? Would the birds manifest themselves out of thin air in daylight if invoked in drawings and paintings in deep dark caves? If you see projected pictures and hear someone talk about a bird, have you encountered it? Is it at that time some form of spirit bird, an avatar of birdness? And if I do, when I do, encounter a whooper, will it then morph (for me) from spirit bird to bird with a spirit, with a soul?

While riding home on the Blue Line train, I reflect on these things, on the power of transformation set against the power of destruction, on emergent kenosis. I remember something I read about tribes along the Illinois River three hundred years ago where water birds—cranes—were so abundant that these people identified with them; they became totem animals because of their spiritual muchness. But this calls to mind a scene in Fools Crow when an experience of thousands of geese coming and going on a lake leads to fear and nightmares—because nature in full force can roar over you like Niagara Falls.

For many of us an abiding dream is of abundance once more, a sky full of birds even here in Chicago. One could drive somewhere, down to Texas or up to Wisconsin, and potentially see some whoopers; these days they also appear along the Illinois River—but part of my game is to pay close attention to what I can see here in Chicago, without travelling. Some spring or fall, when the sandhills grace the air, I might be quick enough to catch a glimpse of a slightly different, bigger, whiter crane, or maybe two; I’ll hear a different call; I’ll know what they are. There are over a hundred whooping cranes that migrate this way now. It is an encounter that at one time could not have been predicted—for nearly anyone—a chance that could have slipped away. But now? I know the signs. There is that other deep structural element implied by kenosis in action: hope.