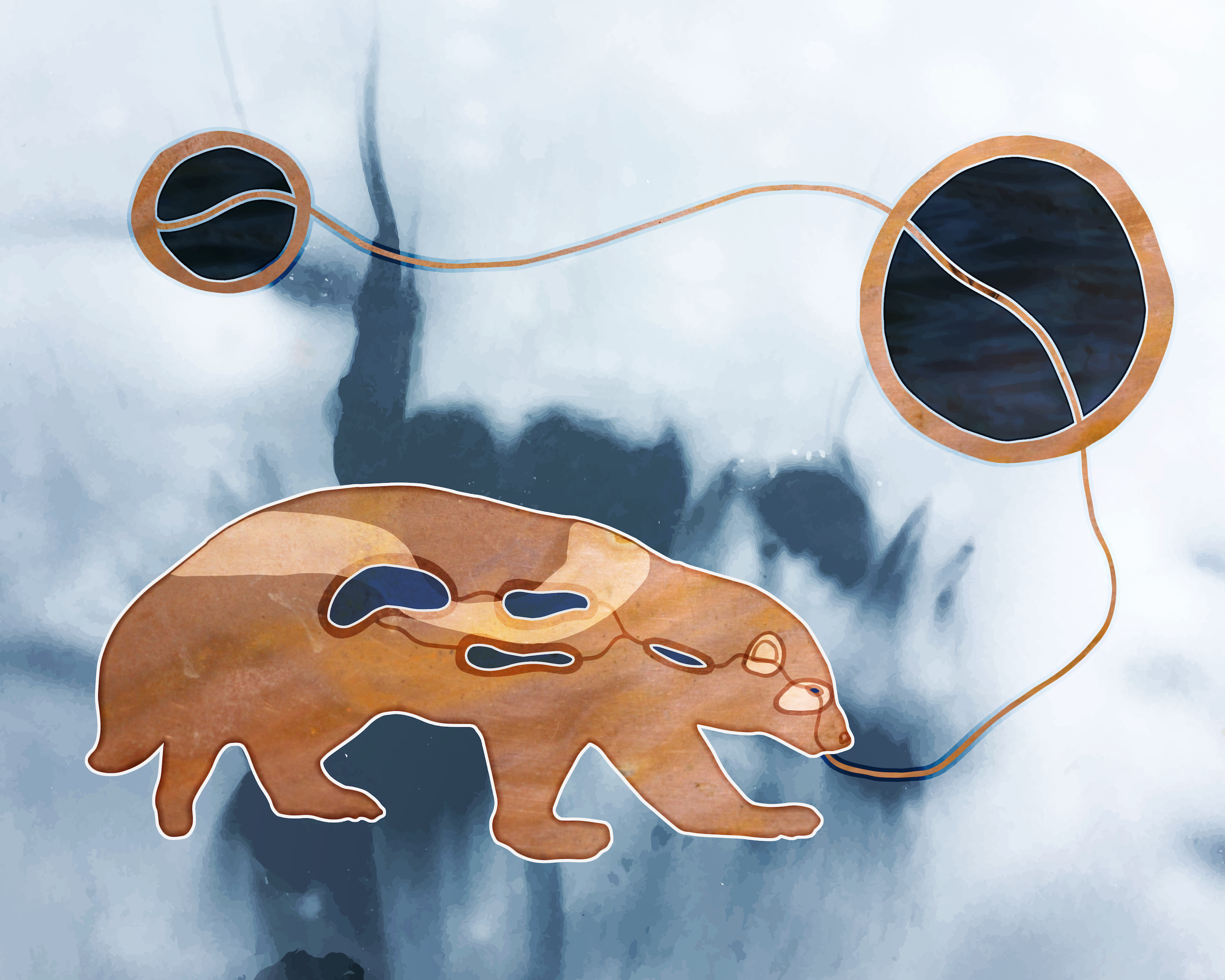 Wolverines once walked Michigan but now are rare sightings equated with rumors and illusory fancy. To be fair, Anishinaabeg never cared much for wolverines, who were said to have come to Aki (Earth) in a shooting star that impacted the land. Always seen as out of place, wolverines were fierce animals who made their presence known by pissing in our food just to let us know they didn’t want us anywhere nearby. Nonetheless, the thought of their presence returns us to another generation—one before colonization, before apocalypse.

The way I understand it, from an Anishinaabekwe perspective passed on to me from my mother, we are already living in the post-apocalypse. Life as we knew it has been fundamentally interrupted, devastated, and shifted. Genocide occurred through war, the spread of diseases, and strategic, government-led removal of Indigenous peoples in order to open up land for the taking by businesses and settlers. Along with the echo of trauma that resonates through generations caused by policies that prevent cultural practices and tactics such as taking Indigenous children away to residential schools, assimilation and ongoing colonization continue to impact Indigenous communities today. So instead of imagining a future of devastation, we recognize what has already happened and ask what it is we can do in the present with hope for the next generations. 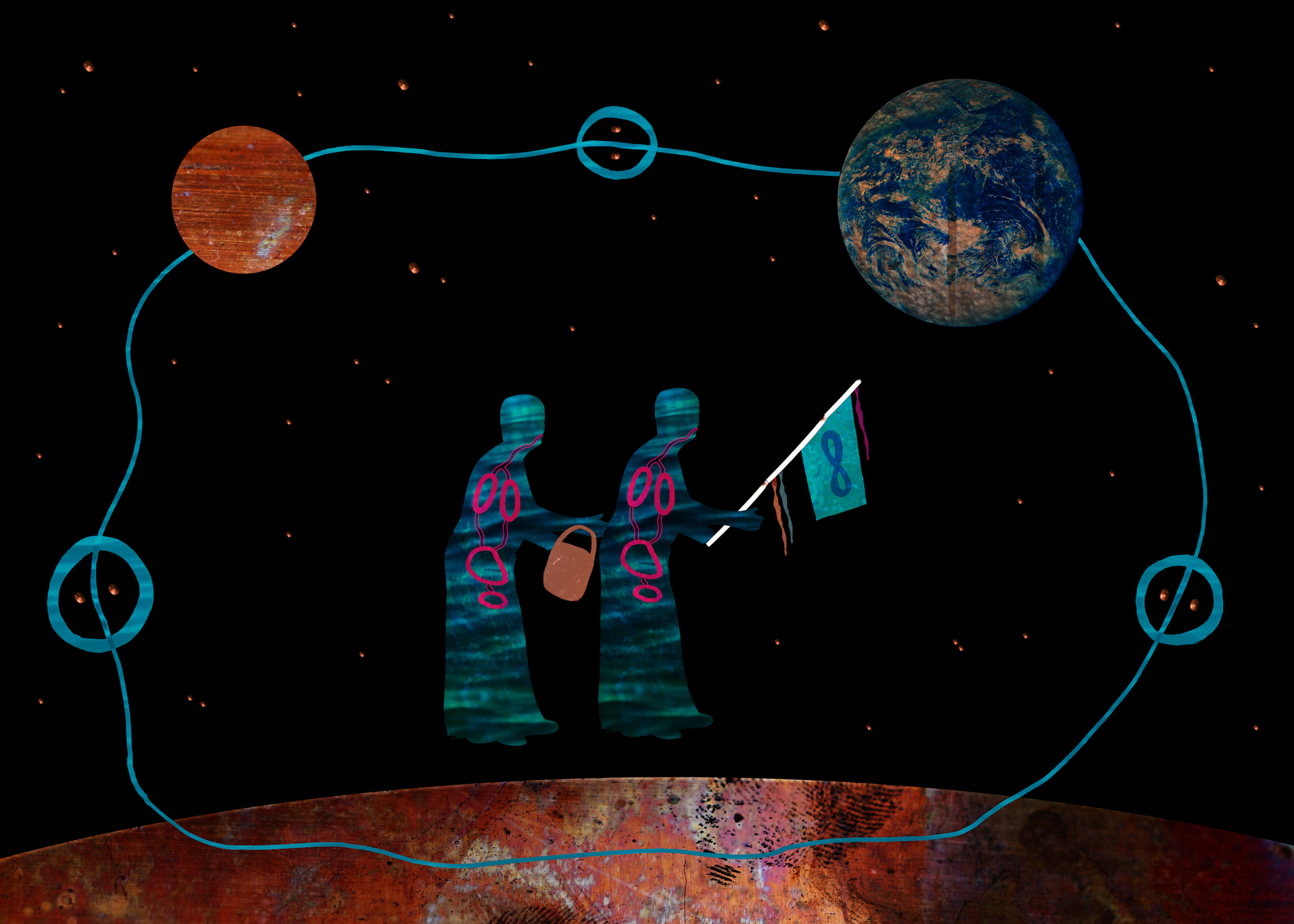 We can walk and sing for the waters, carrying them in copper to amplify the resonation of our voices, our hopes, our good thoughts. Just as we carry the waters, the waters carry us, sustaining our lives and the interrelations that connect us all. It is our responsibility to clean the waters, to keep those waters clean continuously, and to recognize and honor the role of water as life.

As we walk, we repeat the lessons of bears, who are protectors. They are known also for their knowledge of plant medicines, thanks to their attentive pacing as they patrol the perimeters of territories they are intended to care for. Stars, who reflect on the waters, watched the ways in which Bear so carefully traversed the land and gifted to Bear teachings about how to gather and use plants as medicines. It was through our mindful observations of Bear that we, too, learned that knowledge must be reciprocated with care, through tending plants, growing plants, and caring for the lands. 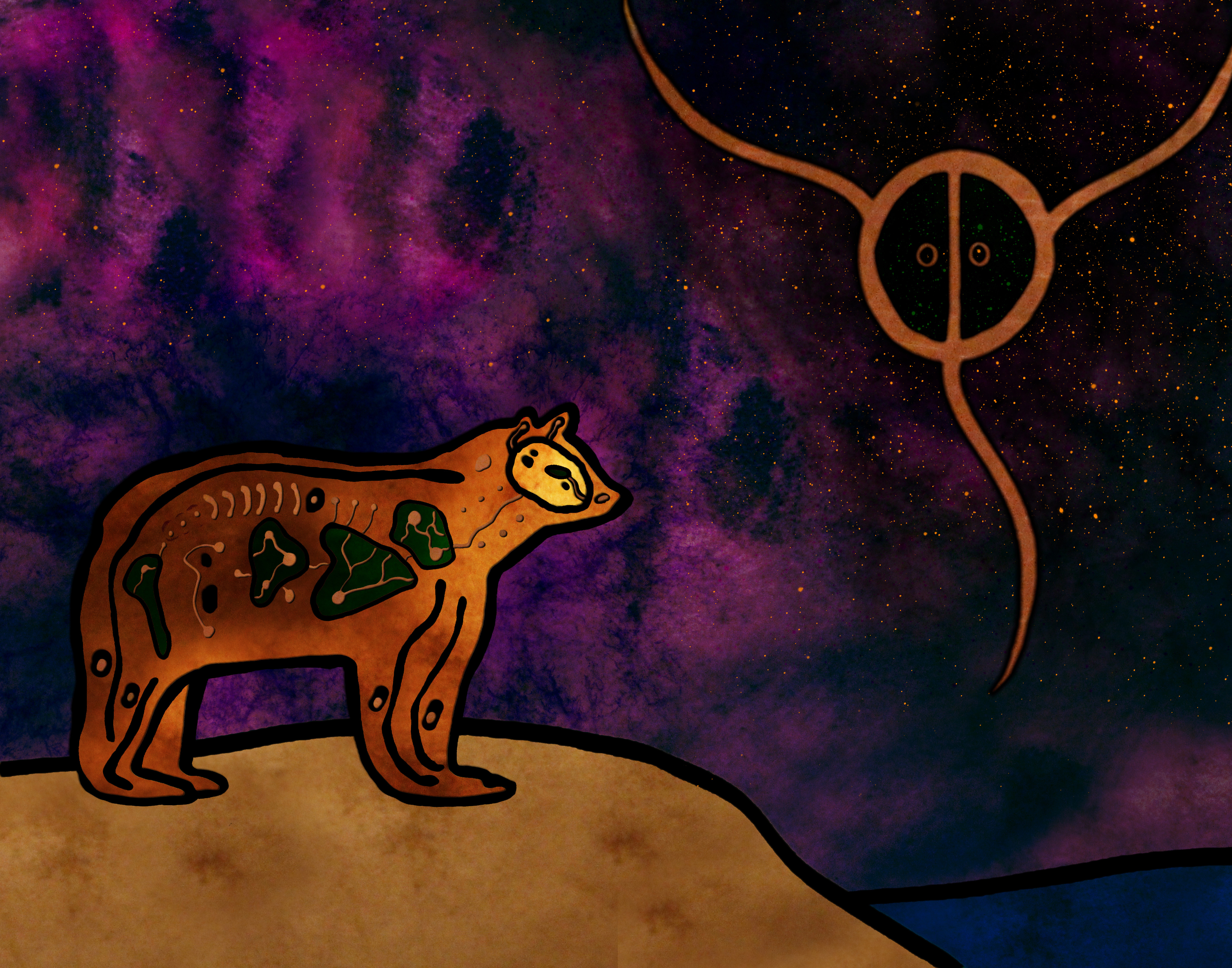 Unfortunately, our ability to care for Aki as we once did has been prevented through colonial restrictions. Practices such as controlled burning have been limited or even banned in many places, and hunting, fishing, and gathering has been dictated often without Indigenous input, leading to issues of either overgrowth or undergrowth and an overall lack of balance, which affects us all. It is only in returning to knowledge inherent to Aki that the next generations will thrive. As Aki breathes herself into form, we need to breathe with her and to replicate the teachings of traditional ecological knowledge in order to move toward an ecologically robust future. Individualization only furthers divides. Interrelated ecosystems call on us to also work collaboratively for restoring connections and enacting balance. 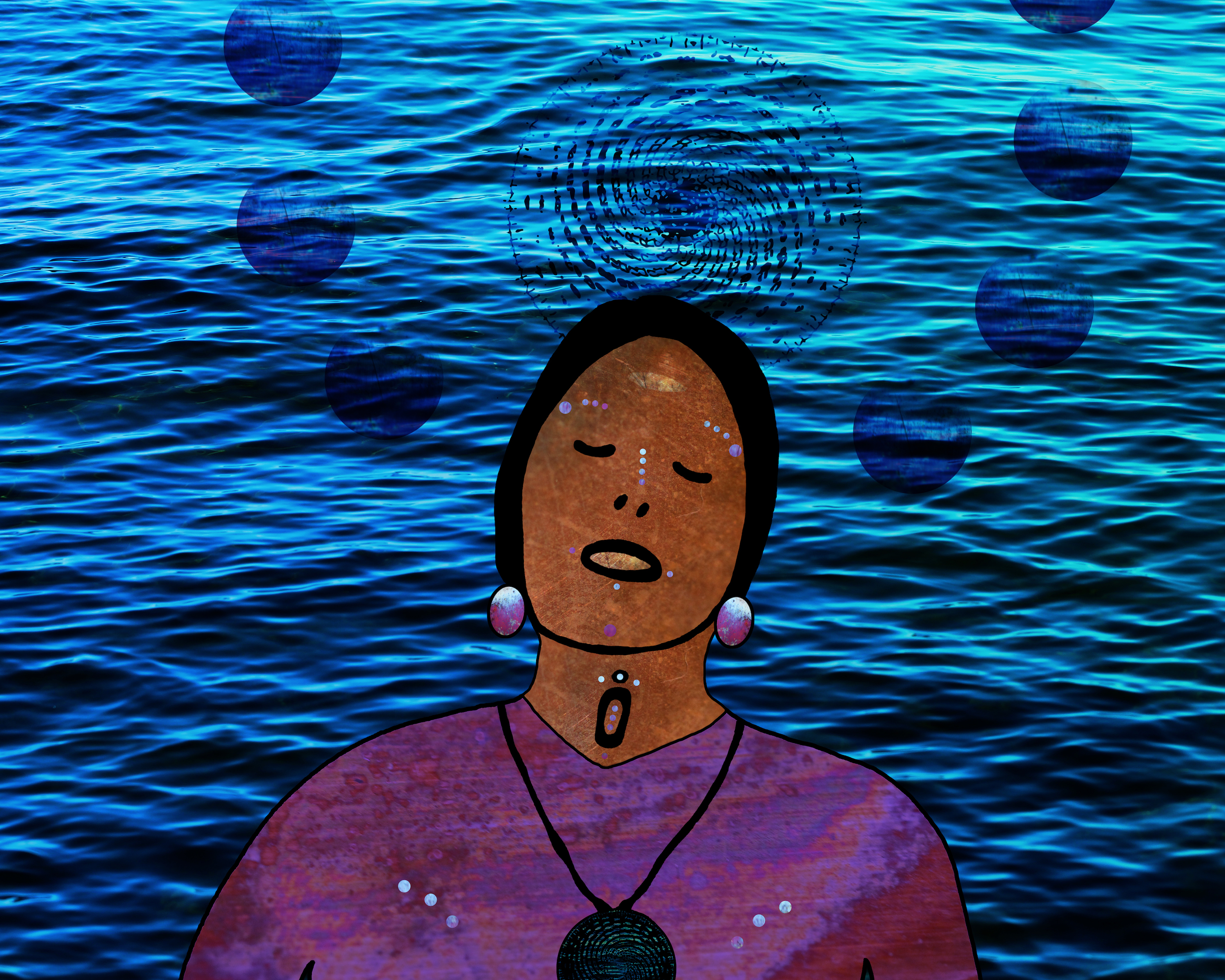 Regardless of whether destruction of Aki is addressed, or ongoing, Indigenous people will carry on. Our Aunties are fierce, with laughter that can both fill a room with the greatest warmth and cut a person open like a sharp knife. Laughter is medicine, in both of these cases. Grandmothers have the immense strength and perseverance to even travel to another planet to gather water, singing songs passed down through the generations to sustain us all, a shimmering future of copper glinting as pails sway along paths of red land.

Whichever path, the one of restoration or the one of destruction, we all can look to the emergence of hybridity as a way not only to survive, but to thrive. These days, in Michigan in Nkwejong (meaning Where the Waters Meet) coywolves walk where there were once waterways that have since been drained for streets. Coywolves are mixes of coyotes and wolves who take on varying traits. They are able to support themselves independently during the isolation necessary for safety, as well as to meet up with their community and honor the collective efforts of all. Even when apart, they communicate through howls, and in doing so know they are never truly alone. They recognize their territories and uphold their responsibilities to those places, whether among grasses or concrete. They show us the hope for continuance through the embrace of change. 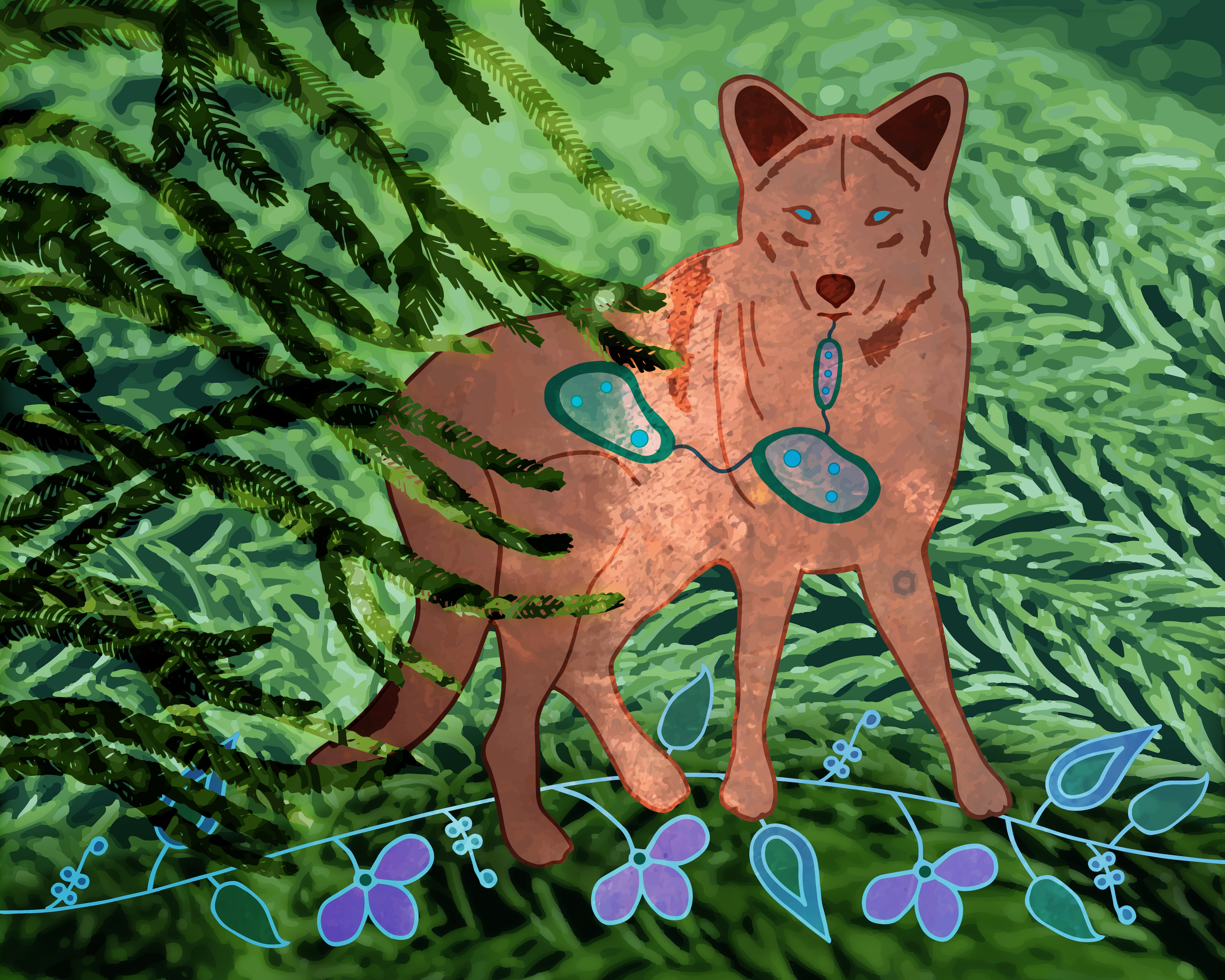 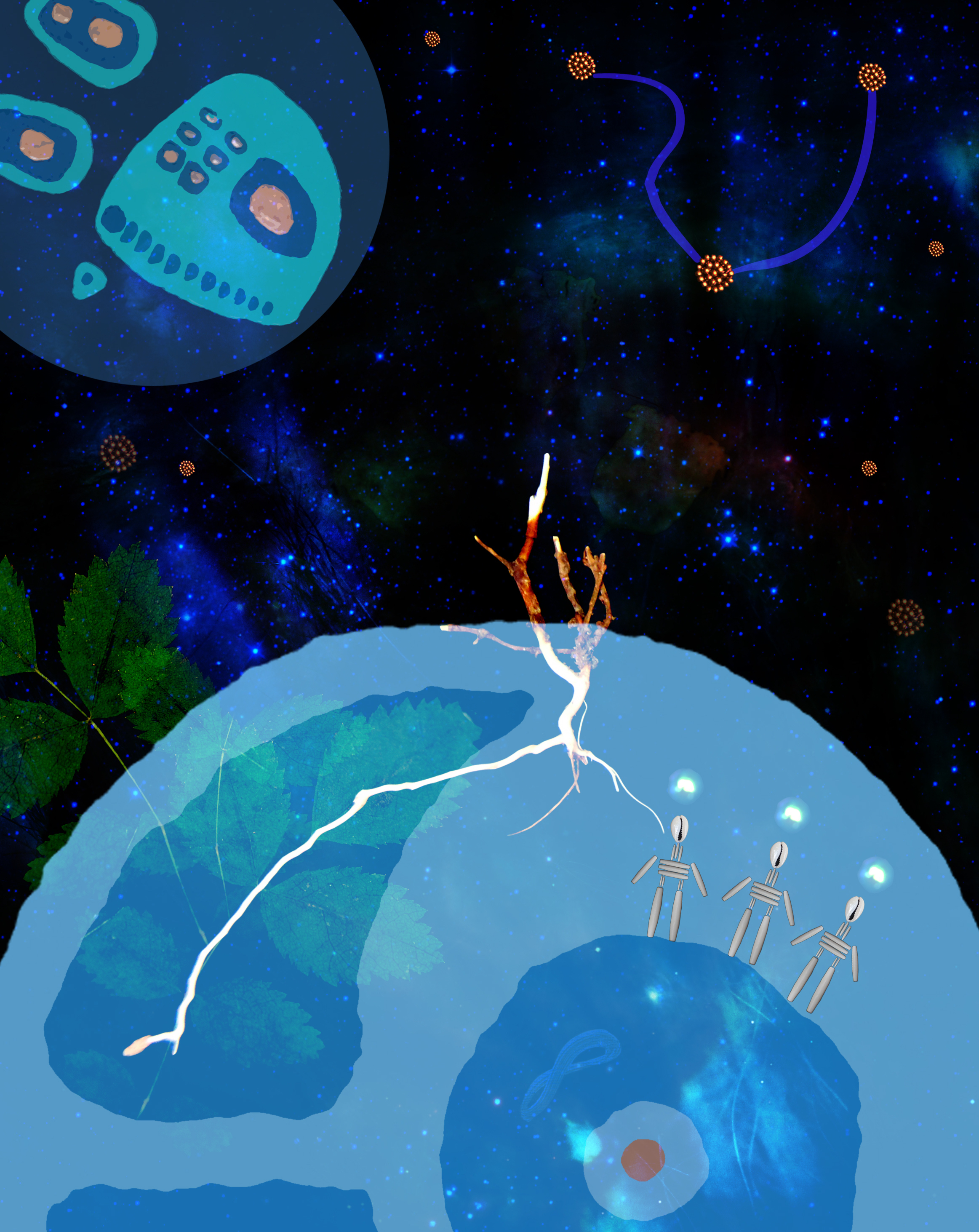 Adaptation is a continuum, and those who came before us set the path forward. As Anishinaabeg stopped at places along their migration journey to where food grows on water, they counseled together about their responsibilities for the well-being of their communities and their connections to lands, waters, and all life. Although some families went in their own directions and established themselves in different places, all Anishinaabeg still sustain the connection of their approach to mino-bimaadiziwin (living a good life). There is no one right way, but rather many ways to be responsible for ecological well-being. It is on us to reinforce our interrelations with all life and to ask ourselves, with hope for well-being for lands, waters, and all interconnected life: What ways will we carry on from those who came before us? What ways can we adapt for our current situation? What ways will we generate that can be passed on for the generations ahead? 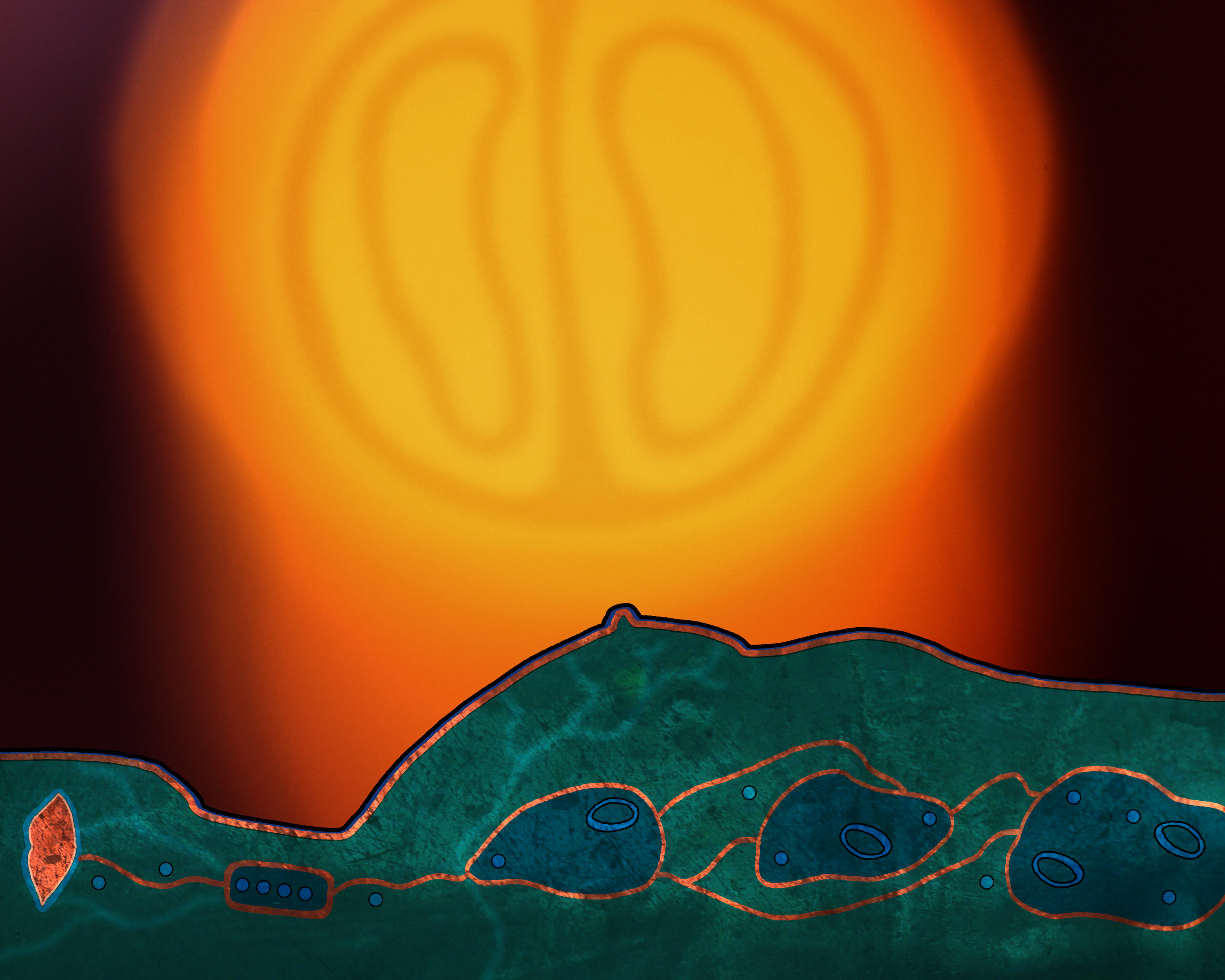 Elizabeth LaPensée, Ph.D., is an award-winning designer, writer, artist, and researcher who creates and studies Indigenous-led media such as games and comics. She is Anishinaabe with family from Bay Mills, Métis, and Irish. She is an Assistant Professor of Media and Information and Writing, Rhetoric, and American Cultures at Michigan State University, and a 2018 Guggenheim Fellow.