Should we clone the mammoth? The question is rapidly moving from a hypothetical case to a matter of applied ethics. The technology isn’t here today, but it will be soon.

We acknowledge that the undertaking has very considerable appeal for both those who love new technology and for those who love the idea of large hairy proboscideans once again roaming North America. However, we should not drag living things into the world merely for a lark. There must be a good reason for it, especially since experience with cloning suggests that there may be considerable attendant suffering—of the females of the related species whose eggs are harvested for the procedure, of the surrogate mothers bearing mismatched offspring, and of the imperfectly formed animals that may result from early attempts.

So, is there any ethical reason to resurrect lost species like the mammoth?

One reason might be that the act of de-extinction is reversing a wrong, undoing a bad act that has occurred in the past. After all every species—the mammoth, the Passenger Pigeon, the Thylacine—that has been proposed for ‘de-extinction’ was first destroyed by humans.[1] Thus the act could be viewed as an act of restitution.

But for de-extinction to function as restitution, it has to restore (or at least try to compensate for) what was lost to an injured party. And who is the injured party? For whom, the mammoth?

The intuitive answer is “the mammoth.” After all, they were alive, roaming the tundra and feeling the sun on their curly coats, and now they are all dead. The problem is that it doesn’t seem like one can have actual moral obligations to what doesn’t exist. One might claim that the obligation is to the future members of the species. And for many environmental ethicists, certain obligations are grounded in our duty to future generations of humans and other species that we know will exist. However, if humans decide not to revive the species, then they can ensure no morally relevant individuals will ever exist and thus ensure that no obligations will exist.[2] If you don’t want responsibilities to Passenger Pigeons, then don’t resurrect Passenger Pigeons.

Another possible ethical grounding of de-extinction is that we owe restitution to the ecosystems that lost the extinct species. One might object to the idea that an ecosystem is owed restitution because an ecosystem is too diffuse, doesn’t have sentience and so cannot be the object of moral obligations. Very well, then. Let us say that we might owe restitution to the individual sentient creatures that are part of that ecosystem, tracing the value to those animals whose well-being is dependent on that ecosystem. This would include the other animals who lived in the mammoth ecosystem and who now live diminished lives.

The problem is that even though the ten thousand years or so since we lost the mammoth are the tiniest of instants compared to the life of the earth, life is remarkably nimble. Species that were initially hit hard by the mammoth extinction have settled into new grooves or died out. Some are likely extinct themselves, such as mammoth gut and skin bacteria, parasites, and any commensual organisms (did the great beasts support any now-gone species of birds that flew after them foraging in their woolly hair and dung?). Other species adapted to changing conditions. Life moved on. Given these facts, it is hard to make the case that sentient individuals living today are suffering because they are forced to live in a world without mammoths.

Perhaps the wronged party is not the mammoth, or its ecosystem-mates. Perhaps it is us. 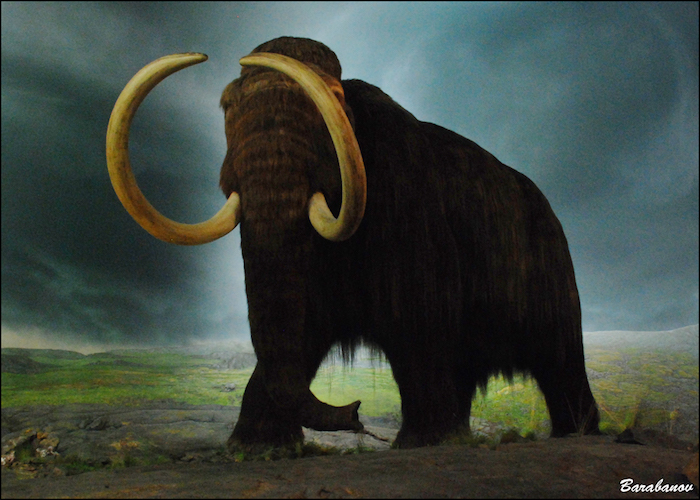 We have been harmed by this extinction. Scientists have been denied the ability to study mammoth ecology and behavior. Many generations never knew the pleasure of seeing the distant sight of a single file of huge Woolly Mammoths, their tusks curved almost in a circle.

However, when thinking about de-extinction in terms of restitution, we need to think about the harm that could occur as well: the suffering of elephant egg donors and surrogate mothers and cloned mammoths with anatomical defects. Also we must consider the sufferings of the first mammoth, who, as a social animal, will most likely be pained to live in a world without other mammoths. And so on. If, on balance, reviving the mammoth could be done with minimal harm to the creatures being revived, then reviving mammoths may very well be ethically justifiable.

However, even if the action can be justified, this doesn’t entail that the action is mandatory. Ethicists distinguish between the permissible and the obligatory. We believe that, done right, de-extinction could be a permissible action. The action would be grounded by the restitution to humans who currently live in a poorer world without mammoths. However, it isn’t obligatory. Why not? Because the restitution is to ourselves, and therefore we have the right to waive it. Furthermore, any restitution owed to ourselves might be trumped by other ethical duties like ensuring that the world’s humans have clean water to drink or rebuilding populations of the thousands of endangered species still in existence.

So, if there are no other competing and stronger obligations and de-extinction can be done with a very minimal amount of harm to the animals involved, then it may very well be ethically justifiable.

More pragmatically, would any good come from reviving the mammoth or any other extinct species before we have discharged our stronger obligations? Because let’s be honest: none of us will live to see a perfect world, where human suffering and the danger of further extinction have been eliminated.

We think that some good could come from mammoth revival. Money for de-extinction is likely to come from donors who are particularly interested in this effort and who cannot be persuaded to give to more ethically urgent but less glamorous projects. In this case, if it can be done with minimal harm, it could do real good. Hearts need nourishment; dispirited conservationists need some inspiration, and the beauty and majesty of many extinct creatures may rouse enthusiasm for properly conserving their endangered counterparts.

[1] Some claim that the mammoth met its doom due to climactic changes. That would be nice. If the climate theory ever overtakes the human hunting theory, it will be interesting to see if calls for mammoth de-extinction dwindle.

Emma Marris is a freelance writer and author, who covers science and the environment. Her 2011 book, Rambunctious Garden, reported on new conservation approaches developing in response to the massive impact humans have had on the rest of nature. She is married to Yasha Rohwer and they have two children.

Yasha Rohwer is an Assistant Professor of Philosophy at Oregon Tech in Klamath Falls. He is a philosopher of science and an ethicist. In particular, he focuses on the nature of scientific explanations, the role of models in science, and the ethics of emerging technologies. He is married to Emma Marris and they have two children.