“We live suspended in a spider’s web; care must be taken not to break a single strand.”
-Enga proverb, Papua New Guinea

Charles Darwin wrote that conscience is the little voice from within that lets us know right from wrong. Conscience and morals are universal, but, with the exception of a few core morals found in all cultures, the content of what is right or wrong is culturally defined and can change rapidly with the times.[1] Many societies do not have a word for conscience, but most have words for guilt or shame, as well as phrases to describe the feelings that accompany a good conscience. The !Kung Bushmen say “kxae !ka /'hom,” to have a beautiful heart (i.e. to be conscientious and fair towards others); the Enga of Papua New Guinea say “mona auu petae paliuu,” my heart sits well.

Richard Alexander has proposed that conscience evolved to tell us how far we can go without incurring intolerable risks, how we can cheat without being caught.[2] But conscience is far more than an internal police force, more than Sigmund Freud’s super-ego dominating the id. At the heart of conscience in all societies is loyalty, making conscience the keeper of trust in relationships through time and over space. Many deeds can trigger pangs of conscience, but to let down or betray close kin, friends or fellow fighters trumps all, a central theme in the classics from Shakespeare to Tolstoy to literature on modern wars.

How and why might conscience have come to be? Conscience most likely evolved hand-in-hand with changes in our socio-cognitive architecture and cultures of cooperative living that fostered greater pro-sociality. One major step in the evolution of conscience was the ability to develop shared intentions and understandings by reading what others were thinking. Such “theory of mind” was fundamental to the development of cultural norms, as well as feelings of shame or guilt when they were broken.

Sarah Hrdy and Carel Von Schaik have proposed that this ability to “get into the heads of others” evolved as the result of cooperative breeding, the routine care of offspring by individuals other than mother: “it takes a village.”[3,4] As the argument goes, infants and toddlers would have to learn to read the minds of caretakers and entice them to invest; in turn, mothers would not share care with anybody who would not be conscientious in care giving. But is conscience necessary within the bounds of a small hunter-gatherer camp where everybody sees what others are doing? Probably not.

Another strong pull for the evolution of conscience occurred somewhere in the last two hundred thousand to three hundred thousand years, a time when humans began to establish networks outside the local group. These networks created imagined communities, congregated in the mind but not in space and over time. The success of such virtual communities, composed of the living and ancestors, depended on a range of cultural norms—respect for the possessions of others, their territory and mates, as well the fulfillment of kinship obligations. The specific contents of norms and obligations were, of course, stipulated culturally. Thus, conscience upheld fidelity and trust in the absence of direct social control.

For example, !Kung Bushmen of the Kalahari today construct networks that allow them to depend heavily upon each other for many forms of support: the delicate web of relations described in the opening quote. The !Kung keep such virtual networks alive through the periodic exchange of gifts and the vivid fireside stories that bring distant kin and exchange partners into the hearts and minds of those gathered around the hearth.[5] These stories evoke sentiments of affection and fidelity, the making of gifts, or plans for a visit. Prized gifts are rarely diverted from the designated recipient, even if the giver encounters better opportunities in the meanwhile. During times of hardship when hosts are also in need, residences and resources are shared. Daily grievances are controlled through gossip and haggling, but the web of relations essential for life is secured by conscience.

Loyalties to individuals, maintained by conscience, can be extended to groups through cultural means. Among the Enga of highland Papua New Guinea, a warfaring, tribal society, lifelong loyalties were generated within a cohort of young men who were members of the same clan through male initiations.[6] Older men controlled young adults through ceremonies that kept youths out of the marriage market until they were mature and had established close bonds of cooperation. The underlying belief was that the entire cohort was married to a mythical spirit woman during adolescence. If they remained faithful to her by avoiding relations with human women, then all clan brothers would be transformed, thrive, and be deemed fit for marriage. If one was unfaithful, it was believed that the sacred plants representing the spirit women would wither and die, affecting the well-being of the entire cohort. Loyalty to clan brothers kept strapping young men away from relations with women for up to a decade, until they were over approximately twenty-eight years old. Men who went through ceremonies together formed a lifelong commitment to each other in times of war and peace. 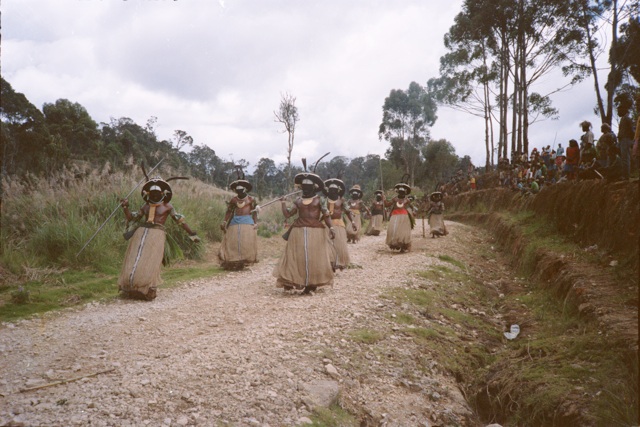 From the sands of the Kalahari to the mountainous terrain of Papua New Guinea, loyalty and commitment kept by conscience increased trust and reputation in the moral hierarchy as few other qualities could. Reputation, in turn, attracted investment from others. As an Enga adage goes: "Don’t put out the fire when you see the sun”; do not forego old relationships in the face of new opportunities.

Conscience is powerful. But can it be extended beyond relationships between individuals or small groups to address some of the problems of the world today? Although some disasters may initially trigger passing twinges of conscience, more often losses in large numbers numb.[7] Today supporters of social, political, and environmental causes frequently use the word conscience. But are these invocations a matter of conscience or simply adaptive behavior we feel is important for our own projects, survival, and well-being?

Culture is also powerful. Cultural norms and practices such as male initiations can overcome the most fundamental tendencies of sexual drive, hunger, or avoidance of pain and mutilation. But can culture also be crafted to engage the power of conscience to address the problems of the world: environment, poverty, health, and inequality?

Polly Wiessner is a Professor of Anthropology at the University of Utah.  Over the past forty years, she has conducted research among the !Kung (Ju/'hoansi) Bushmen of the Kalahari Desert on social networks to reduce risk, and style and social information in material culture. For the past thirty years, she has also carried out ethnohistorical studies among the Enga of highland New Guinea.

Navigating North with a Broken Compass

Jessica Greg
What are the connections between culture and conscience?