The human contribution to the planetary ecology might be our entertaining craziness, our skills as musicians and performers, our awe-inspiring dignity as ritualists and solemn ceremonialists—because that is what seems to delight the watching wild world.

Ed. Note: The Introduction was written and the Interview conducted by Karina Pino and David Taylor. The Interview was translated into English by Emmanuel Pardo. Film footage by Melinda Levin and Filip Celander. Videos to accompany this article can be found at: Scenes from Sancti Spiritus, Havana, and TECMA performance in Romerillo https://vimeo.com/143318124 and TECMA in Pinar del Rio https://vimeo.com/147363894. See more performances on their Facebook page, https://www.facebook.com/tecmagrupo/.

On November 4, 2014, Melinda Levin, Filip Celander, and David Taylor, along with their Cuban translator and guide Karina Pino Gallardo, documented a performance by TECMA: Teatro Callejero Medio Ambiental (Street Theatre about the Environment) in Romerillo, a neighborhood in Havana. TECMA is directed by Luis Valdes. The performance for children, En Busca de una Antigua Ilusión (Searching for an Old Illusion), was a combination of elaborate costumes, stilts, drums, trumpets, singing, and storytelling, as well as audience (children) participation through chalk drawings, singing, and dancing. A crowd of young people, parents, and grandparents grew from fifty to well over one hundred people in a matter of minutes, as the lines between performer and audience, stage and street, increasingly blurred.

TECMA comes from Pinar del Rio, a city of approximately 130,000 people, 190 kilometers west of Havana. Pinar del Rio is far from the main theater circuits, so TECMA is not bound by many of the artistic expectations theater groups in larger cities, such as Havana and Santiago, must consider. It performs mostly street theater for children about environmental issues, with the performers immersing themselves in the immediate community; its impact is often recordable by the number of people who spontaneously join the group in each performance, as well as the relationship the performance builds with the space (street, sidewalk, neighborhood, and community) in which it operates. 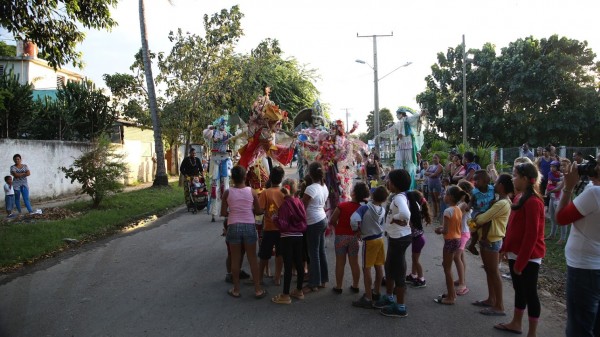 En Busca de una Antigua Ilusión reflects a concern for the development of new kind of speech/conversation in the relationship between theater and environmental outreach. Environmental concern reaches the audience/participant through a process of collective creation less influenced by improvisational theatre and public participation in situ. Rather, it comes from an intellectualized and associative reception, from heterogeneous and familiar symbols and references.

The narrative for the performance comes from a text written in the 1980s that became a classic in Cuban children's literature. The story is told by a grandfather turtle who describes the ocean prior to the loss and degradation of marine ecosystems. The children are not only invited to evoke the story from grandfather turtle—who, off and on, has to be asked to keep telling it—but throughout the performance, they also become a part of the story being told. In other words, the theatrical text/environmental advocacy storyline effectively mixes audience, actor, word, and theatrical space in a new ratio, allowing the environmental message to be communicated and the audience engaged in a more open manner. Roland Barthes, in The Pleasure of the Text, calls this jouissance, pleasure, an almost physical body relationship, writing that human beings can set themselves in a text, whether verbal or scenic. Perhaps in this way, a performance becomes less a distancing from our environment and more a physical and artistic meeting place.

KP/DT: Could you please speak a little about your personal history? How did you become interested in theater and ecology?

LV: In the case of theater, it came to me in an empirical way. But it also grew on me as part of my time in the School of Art Instructors. There was a lot of interest in the training being relatively integral, even when each one of us specialized in a specific artistic manifestation. In my case, it was the plastic arts, and of course this came back to me as I worked in costume design, make-up, and all that is a part of scenography. And as theater is the indispensable complement that glues all these pieces together, it also is, of course, the creative space in which I feel the most comfortable. Moreover, since TECMA is oriented toward social transformation, TECMA’s logic of intervention operates in the conceptual space of environmental popular education.

KP/DT: Were you always able to connect these interests to each other?

LV: Since the group’s very inception. Actually, it was like that since I drafted the guidelines for the creative project. It was also because I experienced the workshops of popular environmental education offered by the Center of Promotion and Education for Sustainable Development, an initiative connected to the network of popular environmental educators of Pinar del Río. This network also coordinates the Martin Luther King Memorial Center. I already had this life conception, so it was only a matter of translating it into theatrical form and recoding it to raise awareness among the communities.

KP/DT: How did TECMA begin? When was the group created?

LV: At the beginning, we weren’t called TECMA, but Truth Theater (Teatro de la Verdad). Essentially, that was because of the commitment to our present and the realities in our contexts of action, but TECMA came to be a more identity-based way of showing ourselves. All of us are TECMA.

KP/DT: What was your initial participation in the group?

LV: From the very start I was the coordinator of the group’s creative and training processes, in addition to assuming the design of the public image and the performances of the group.

KP/DT: Which other artists decided to join the group? Please name them.

KP/DT: Is the group always interested in the use of scenic arts to approach environmental issues?

LV: In general, the artistic code that we use the most to reach the people is street theater, but if the project has grown to become part of a more ambitious umbrella initiative that today includes TECMA, then we should talk about that explosion in street art that seeks to use all codes to raise community environmental awareness.

KP/DT: Are the group performances mainly aimed at children?

LV: Almost always, what we try to do is leave the staging work open to any age, creed, race, or any other way of experiencing life. But we do have offerings that are specifically meant for children, just as there are others that are only meant for adults.

KP/DT: How do the performances connect environmental issues to the interpretation itself, the fact that the audience becomes part of a spectacle? Is it done through a story, the music, the costumes? Please, elaborate, if possible, considering the experience we watched in Romerillo. Can you describe how the group decides to conceive a show collectively? Maybe explaining how the more formal, aesthetic moment of play composition works?

LV: First of all, the whole situation comes from the life experiences of each of the actors and actresses that make the group, and of course the life story of the group itself, the collective subject that we are, besides the fact that we are always in “diagnosis mode” regarding the contexts where we are working, and that is both before and after the performances. We also have exercises that call to a participative diagnosis in that same way. The performance, the spectacle, the dramaturgy, the music, all the images and circensian elements, it is all part of the theatrical totality. And this, as a whole, is itself subordinated to the environmental concept as a medium for communication, awareness, and the transformation of the audience.

In the show we presented in Romerillo, En Busca de una Antigua Ilusión (Searching for an Old Illusion), we are speaking of a play for children. But from the very conception of the show we seek to touch neural points connected to the social issues that unquestioningly involve adults as well, but we do it implicitly in our poetics so it may reach the children better in themes such as power, consumer society, gender, values, spirituality, and sensitivity.

All the processes in TECMA are conceived collectively, although of course they come from a central idea that is born from the life conception of the group itself. It is in that process that the spectacle is structured. Often times, we begin with a text written by a particular playwright; others, we start with the fusion of several pieces or sketches written by ourselves. Several of these are born from our diagnostic approaches to actual situations, and that makes them more experiential.

KP/DT: Where does the group perform? Is it in outdoor spaces? Is it in cinemas? Do you have a preference?

LV: The group is eminently defined by its activity in the streets. But that doesn’t divorce it from the stage or from incursions into other theatrical genres. When we do large productions, we prefer working in the street or in public squares without transforming the environment, but feeding and composing from it, using what it can give to the staging efforts. Other times we work in an itinerant way.

KP/DT: What are your thoughts about the future of the group? What other themes do you expect and wish to approach with your work?

LV: The future is uncertain. The sole fact of being in a constant state of action and in connection to our conception of life, and our defense of it with values and spirituality, in constant transformation and experimentation to reach the people who stop to see a show or any other piece of art that we present, makes it all valuable. And the confidence of knowing all this and working for today with higher goals every time, trying to think about the future as I build the present—therein lies the true value of art.

Melinda Levin, documentary filmmaker, has contributed to numerous award-winning productions as producer, director, camera operator, editor, and/or producer. Her past productions and films in production occur in the United States, Mexico, England, Mongolia, Israel, Cuba, Serbia, Slovakia, Brazil, and Thailand, and examine environmental, cultural, and socio-political issues. She is a professor at the University of North Texas and directs the Department of Media Arts’ Master of Fine Arts degree program in documentary production and studies.

Emmanuel A. Pardo is a Ph.D. student in History at Stony Brook University. His research interests include Latin American and American cultural history, intellectual history, film studies, and comparative literature.

Filip Celander is a Senior Lecturer in the Arts and Technology (ATEC) program at the University of Texas at Dallas. He did most of the film work during our first trip.

Director of Photography Michael B. Mullins is a member of the International Cinematographers Guild and worked for years on the Emmy Award winning “Monk” and on the films Hidalgo, Superman Returns, and The Spiderwick Chronicles. Additionally, he has shot for The Late Show with David Letterman, NBC, ABC, CNN, ESPN, and the BBC. He is a teaching fellow at The University of North Texas’ Department of Media Arts. Mr. Mullins served as producer and director of photography on the award-winning feature film Technically Crazy.

Karina Pino Gallardo completed her B.A. in Theatrology at the University of Arts (ISA) in Havana in 2010. Earlier, she studied acting at the National Theatre School, from which she graduated in 2003, and attended two years at the Faculty of Audiovisual Art of the Superior Institute of Art in Havana.