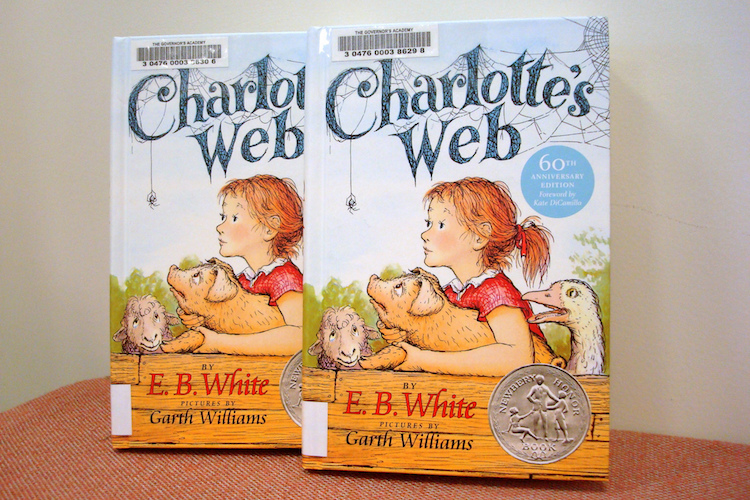 Mid-May. I’m cleaning out the shed behind our suburban home, and look up to see three spider egg sacs clinging to a board over the door. Soon the specks of spider body and teeny segmented legs will crawl out of the silken balls. I think of the famous spider story my Mom read to me, and we read to our children. Near the end of the book, Charlotte weaves her egg sac and then dies. Readers grow to love her, but then must watch her die alone.

“Nobody, of the hundreds of people that had visited the Fair, knew that a grey spider had played the most important part of all. No one was with her when she died.”

Charlotte dies with only humans present (i.e., the readers). Yet E.B. White focuses not on her isolation, but on how a spider, an infinitesimal member of the nonhuman world of nature, plays “the most important part of all.” Much of White’s work echoes this theme: the miracles of that world are constant, but unnoticed.

Ironically, White gave Charlotte the human capacity to reason, which somehow allowed her to understand what most humans resist believing: death is within the cycle of life. Animals are living and dying creatures.

Throughout the book, Charlotte ingeniously prevents Wilbur, an innocent, naïve pig, from being butchered by carefully weaving words (for her human audience) into her web in the corner of the barn doorway: “SOME PIG,” and “TERRIFIC,” and “RADIANT.” Hundreds of people come to see these miracles. The stunning feats convince Wilbur’s owners that he is a marvel of nature, so they don’t kill him. The last word Charlotte wrote in her web to impress the humans was “humble.” Templeton the rat found this word for her on a scrap of newspaper in a garbage heap. He didn’t know what it meant. “Humble has two meanings,” says Charlotte. “It means not proud and it means close to the ground.” This was the only word she wrote in her web—the only “miracle” in the story—that none of the humans ever noticed.

Nor did they notice the miracle of Charlotte’s creativity. She even manufactured the raw material she wove into her lovely tapestries, in which she caught flies and grasshoppers, on which she depended to survive. Her art literally sustained her.

When I look up toward the egg sacs again I see a spider drifting in mid-air. Her abdomen is the exact size and golden color of a toasted sesame seed. Her head and thorax combined are half that size. She seems to climb down a ladder of sunlight from the ceiling, before stopping to dangle six inches from my nose. As she floats in front of me, her double-jointed needle-thin legs knit the heavy air, and I wonder: Why do these creatures inspire such fear? 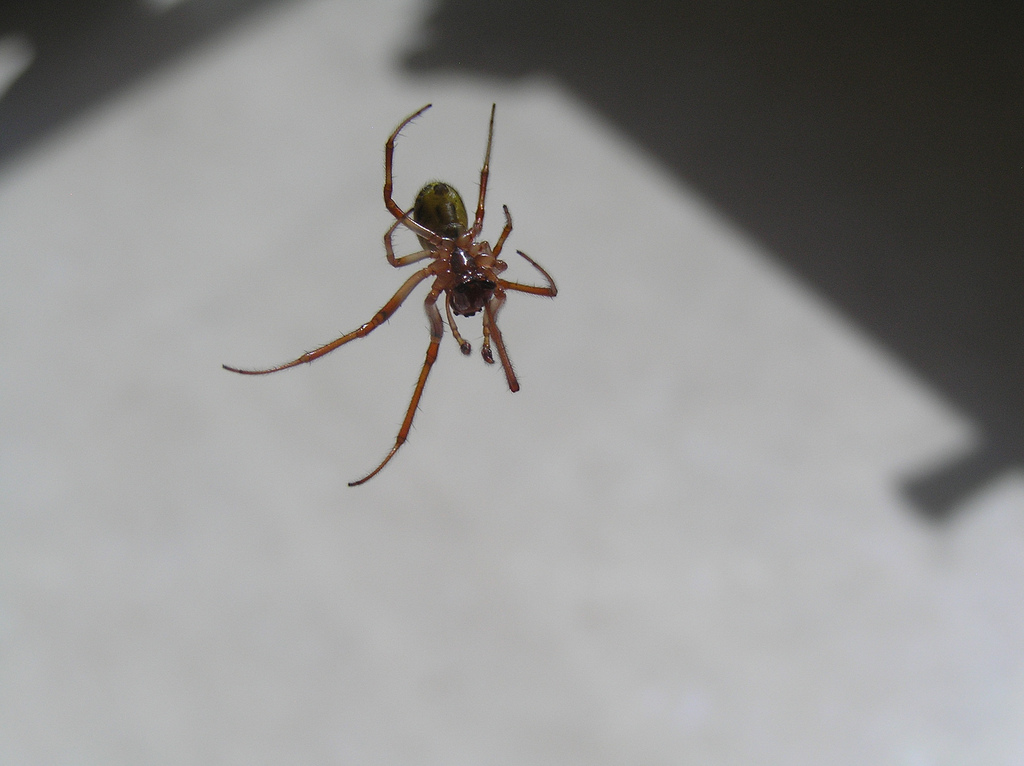 They used to send my daughters running and screaming: “Spider! It’s a spider, Daddy! Can you get it? But don’t kill it! Please don’t kill it!” The mix of terror and compassion always confuses me. Spiders kill mosquitoes, I remind them. Very few are poisonous. And what about Charlotte? Where is the threat?

The drifting spider pauses for an instant. Her legs, now completely still, look like eight little croquet wickets. Then the light changes and I can see the line of silk streaming out of her spinneret. The glistening thread is attached to the ceiling just above my head. The spider swings on the single strand, pursuing a point of attachment.

I was surprised to read that not all spiders make webs. Only about half the 35,000 species do. I rarely notice the ones that don’t, the “wandering” spiders, because the artistry of the web is what attracts me. Along the nearby prairie path, where I often walk, the webs are sometimes built at eye level, connecting to the sumac and dogwood and buckthown on opposite sides of the trail.

One day last fall, I stumbled into a huge web on the path and described it in my journal:

This morning a spider caught my entire distracted brain in its enormous web, and then abruptly crawled into my mouth (which I had opened in confusion over how to tear the sticky tangle from my face and beard). I don’t think it was moving in for the kill—hoping to inject its poison in me, liquify my insides, and suck them out. Maybe, like a fisherman who has lost his bobber in the sun, the spider was lightly touching its line with a leg, “listening” for a bite, when we collided.

It felt like a hairy coffee bean walking across my tongue. I scooped it out with my thumb and index finger at about the same time I figured out what it was. The spider survived what was I presume its only journey inside a human being. But it wouldn’t care about that—whether I was a bumbling human, a waddling raccoon, or a browsing deer. And since spiders have poor eyesight (in spite of usually having 8 eyes), it may have wondered where that sudden wind came from that destroyed its web and blew it into such a warm, wet cave.

My mind wanders back to Charlotte as I notice yet another cluster of egg sacs above me in the shed. I wonder when the sun will warm them enough for those tiny legs to start poking out, like Charlotte’s offspring. I have read that book so many times that I admit I sometimes dream of being Fern, the little girl who could hear a spider talk to her.

In the book, after Charlotte dies in late winter, her egg sacs in the barn-door frame become the promise of spring (“off spring”) for Wilbur, the hope of life going on. Lonely, he waits and waits until Charlotte’s children are finally born. And in later years, he waits each spring for her grandchildren and great grandchildren. Year after year, a few of Charlotte’s relatives live in the door frame and befriend Wilbur.

The book ends with Wilbur describing this life in the barn in the years after Charlotte has died.

It was the best place to be… this warm delicious cellar, with the garrulous geese, the changing seasons, the heat of the sun, the passage of swallows, the nearness of rats, the sameness of sheep, the love of spiders, the smell of manure, and the glory of everything.

When I first read these final lines to my kids years ago, they looked disappointed. “That’s the end?” they asked. “That’s all!?” The book left me as it always does—lost in a moment of believing again in the glorious, ordinary cycle of things.

Later that afternoon, the temperature climbs into the seventies. And near the shed, on a forsythia bush in the backyard, I find the first orbital web I’ve seen this year. The sun turns it into floating concentric rings of quivering diamonds. The web’s silky geometry appears more fragile than lethal. It can’t, after all, catch and hold me, or a blue jay, or a flying squirrel. Yet the thick liquid that hardens into the spider’s silk after leaving the spinnerets is five times stronger than steel for its weight. It is thinner than human hair yet can be stretched a quarter of an inch before breaking. It is as strong as it needs to be. The meticulously constructed radii and sticky spirals of the web are astoundingly effective: freshly trapped bugs only further entwine themselves in the sticky filaments when they try to escape, ensuring their demise. It catches and holds enough flies, moths, crickets, and other bugs to provide for its maker—around thirty per day. 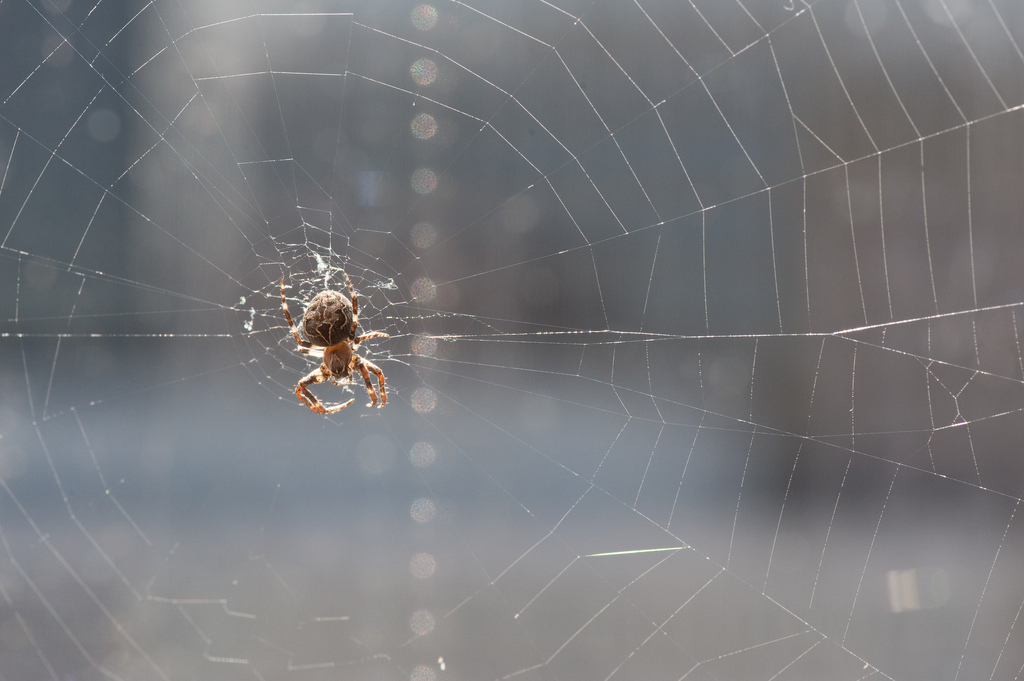 This is another aspect of the wisdom of spiders, I decide; a quiet lesson woven each spring: appropriate strength. Perhaps spiders do communicate in a language we can understand. Not quite as overtly as the fictional Charlotte, of course. Yet E.B. White was onto something: it’s up to us to notice the glorious, ordinary miracles.