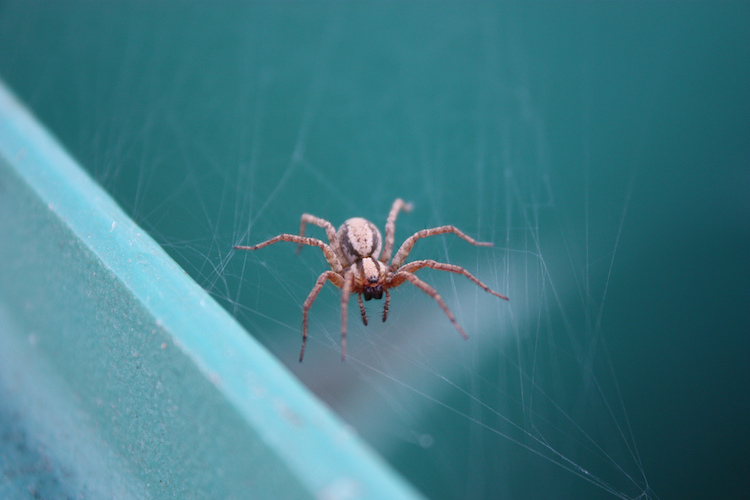 “Never kill spiders,” a pagan friend told me many years ago. “They’re the Goddess.” And though I couldn’t explain why, that made sense to me. I’ve tended to think of spiders as female ever since—even though I’ve learned that the one you find roving around the house might just as easily be a male in search of a mate. But in the logic of animism (that predates scientific classification by several millennia), one spider is, in a sense, all spiders, so every spider is a local and particular emissary of the Goddess.

I’m always happy to run across a spider in the house.

The variety of spider families is vast and includes, among many others, the classic orb-weavers; the funnel-web weavers, the ones who make little gauzy tunnels in the grass; the wolf spiders and the crab spiders, whom you often see in the garden; and the jumping spiders, who hunt their prey actively and have exceptional vision. I think the little pale gold ones I run into at home are probably Yellow Sac Spiders (Cheiracanthium inclusum). They’re in the cobweb-weaver family (which includes another favorite of mine, the Daddy Longlegs). I’ll often find a Yellow Sac making its casual way along the kitchen counter or hanging out on the tiles over the sink. I’ve seen them dangling at the end of a silken thread in the basement, and found two in the bathroom, one exploring the walls, the other cozy in a corner web. Customarily I’ll greet them with a cordial “Hello, little spider, nice to see you” and we go our separate ways.

Now and then I have to rescue one from the sink or bathtub, but normally the brushy hairs on their feet keep them firm on any surface they choose to navigate. I wouldn’t think of hurting them—and in this I’m following the traditions of many cultures in which spiders are felt to be benevolent and lucky. As an old English folk rhyme goes: 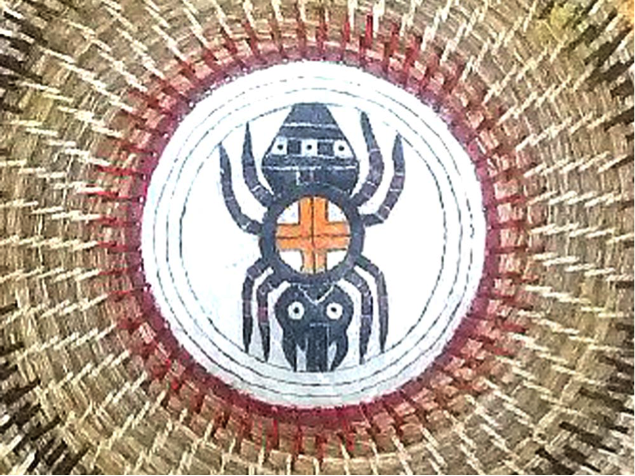 In oral traditions of the Hopi and Navajo, Grandmother Spider fashioned the world, rather like elder women making useful and decorative things for the family (my own Polish grandmother seemed to be perpetually knitting). In Ojibway oral traditions, Spider Woman brought the sun and taught women to make dream catchers to ease children’s nighttime fears. She gave fire to the Choctaw people and taught the Navajo the art of weaving. And, depending on whether you’re Scottish or Muslim, you can thank a spider for saving either Robert the Bruce or Mohammed by quickly spinning a web across the mouth of a cavern refuge, convincing pursuing enemies that nobody was inside. For whatever reason, spiders are often considered auspicious in matters of marriage: in Bengal, people reportedly throw spiders at newlyweds for luck (I’ve never tried this myself, but if you do, please let me know how it goes).

Spider isn’t especially cuddly. With her busy legs, whether drumming along a countertop or manically hauling her abdomen up a silk line, she brings to mind a tiny, uncannily disembodied hand. More than that: unlike most insects, who ignore us entirely, spiders seem to know we’re there. I’ve found myself and a spider mutually stopping short as we suddenly become aware of each other’s presence. With sensitive hairs and minute sensors spread over their entire bodies, spiders can track movement with molecular precision. Each web is created for an exact setting, like a site-specific sculpture. And when spiders hunt, they exhibit what biologists call “high behavioral plasticity,” meaning that they don’t hunt mechanically—they can respond to the same stimulus with different actions in different situations. Unsettlingly like us and yet inexpressibly alien: no wonder there’s so much lore built up around them. 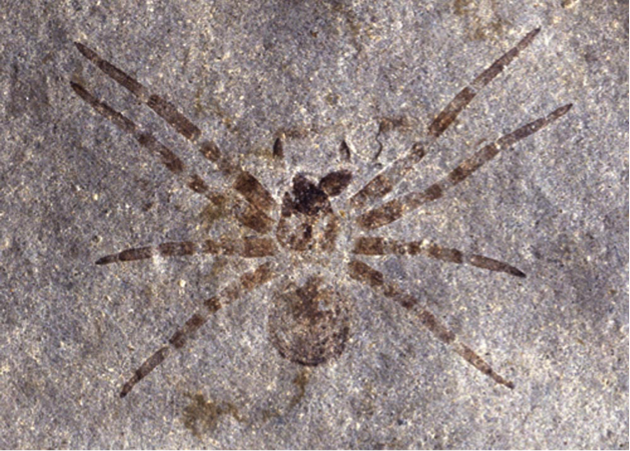 Those marvels of evolution, spider webs, have been found in fossils dating back a hundred million years, and spider silk is still turning up surprises. Produced by males and females alike through exquisite arrays of spinnerets, it’s composed of crystalline amino acid structures suspended in a protein matrix. Webs are biologically costly to make, and spiders often eat their old webs to recycle the protein. Spider silk can adjust its own tension and makes use of a static charge that snaps to insects’ wings. Once it’s up, the web becomes a fantastically sensitive antenna, registering breezes, predators, and prey in its vibrations. How many creatures do we know that extend their senses through such elegant constructions? 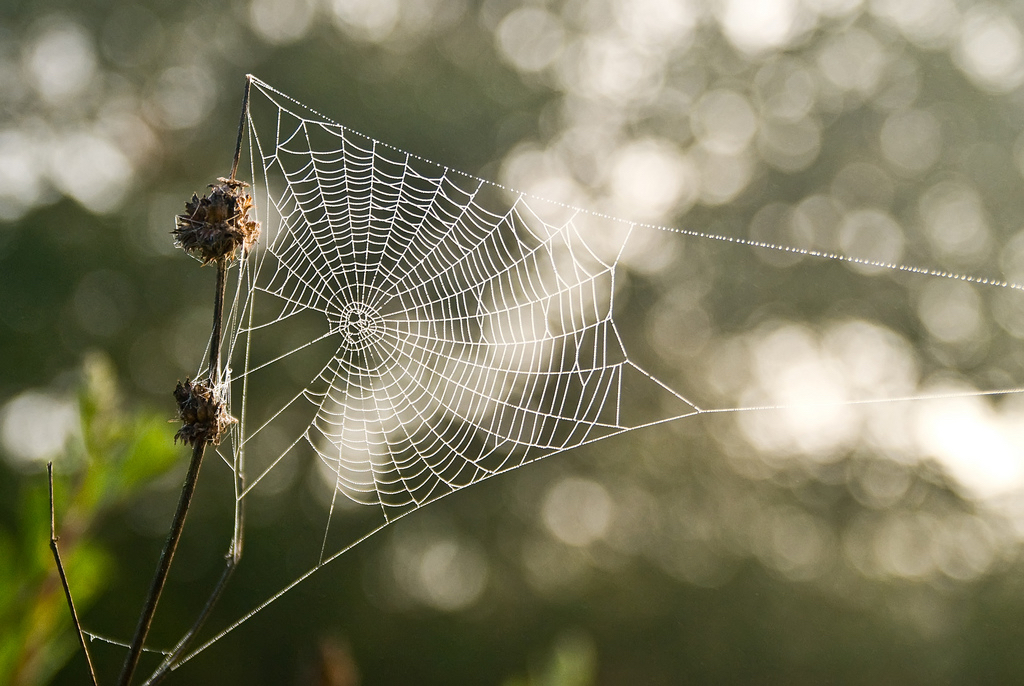 On their own scale, spiders are amazing hunters, as skilled as any tiger. With strong, dexterous mouthparts called chelicerae, which are laden with venom-injecting fangs, plus their manipulable pedipalps, not to mention grabby hooks at the ends of their front legs and spinnerets on their posterior sides, every spider is like an eight-legged Swiss army knife. Patient and alert, web spiders can feel the difference between the movements of a trapped fly, the invasion of a predator, or the wind rippling the web. When she feels the desperate thrashing of prey, she’s out in a flash, nimbly maneuvering along only the non-sticky strands. A quick sting of paralyzing venom does the trick, though some species bundle their dinner up in a nice safe silk wrap before carrying it off for feeding.

All spiders have venom in their bites, even my little Yellow Sac friends. But few pose any danger to humans—unless of course you’ve disturbed a quiet little Black Widow with her neurotoxin that will paralyze your abdominal muscles and make you miserable for days. Some spiders’ venom, like that of the dreaded Brown Recluse, is necrotic: it makes flesh decay and heal slowly—if ever. But generally spiders won’t go out of their way to hurt you, even the aggressive Brazilian Wandering Spiders, which can grow up to five inches long and will run up a broom handle and attack if you’re so foolish as to go after them.

The eating habits of spiders are, to be frank, disgusting by any human standards. Let’s just say that they don’t exactly suck the juice out of their prey; though some spiders can mash food up with their strong chelicerae, most of them simply poke a hole in their victim’s shell, spit in a little digestive fluid, suck out the nutrients, and repeat until only an empty husk is left. Yum! What matters to us is that they consume little critters that we don’t want around; some claim that without spiders’ steady diet of pest insects, we’d have starved long ago.

On the domestic side, Spider’s life is overall matriarchal: it’s all about the eggs. The male’s job is pretty much over after mating—though very few spider ladies deliver the infamous nuptial bite as Black Widows notoriously do. A fully-grown male, having made his final molt, exudes a drop of sperm and then sucks it back up into his pedipalps, the leg-like mouthparts that serve so many functions for these prehensile arachnids. He’s then ready to go out looking for love.

When a female spider is fully mature and feels like mating, she lays down a silken trail perfumed with erotic scents to lead prospective suitors to her door. Even so, the male approaches her web with caution; he’s usually quite a bit smaller than she is, and he doesn’t want to be mistaken for a tasty dinner. So he’ll gently pluck the web in a special spider love-beat, and the female, if receptive, will slowly approach. Some species’ males do a little dance, waving their pedipalps sexily while bouncing their abdomen (yes—they twerk for sex). Some spider couples engage in a little foreplay with their front legs. But most successful males will get to deliver their package of chromosomes without getting their heads bitten off. Such antics offer a glimpse of Anansi, the trickster-spider of African folktales. 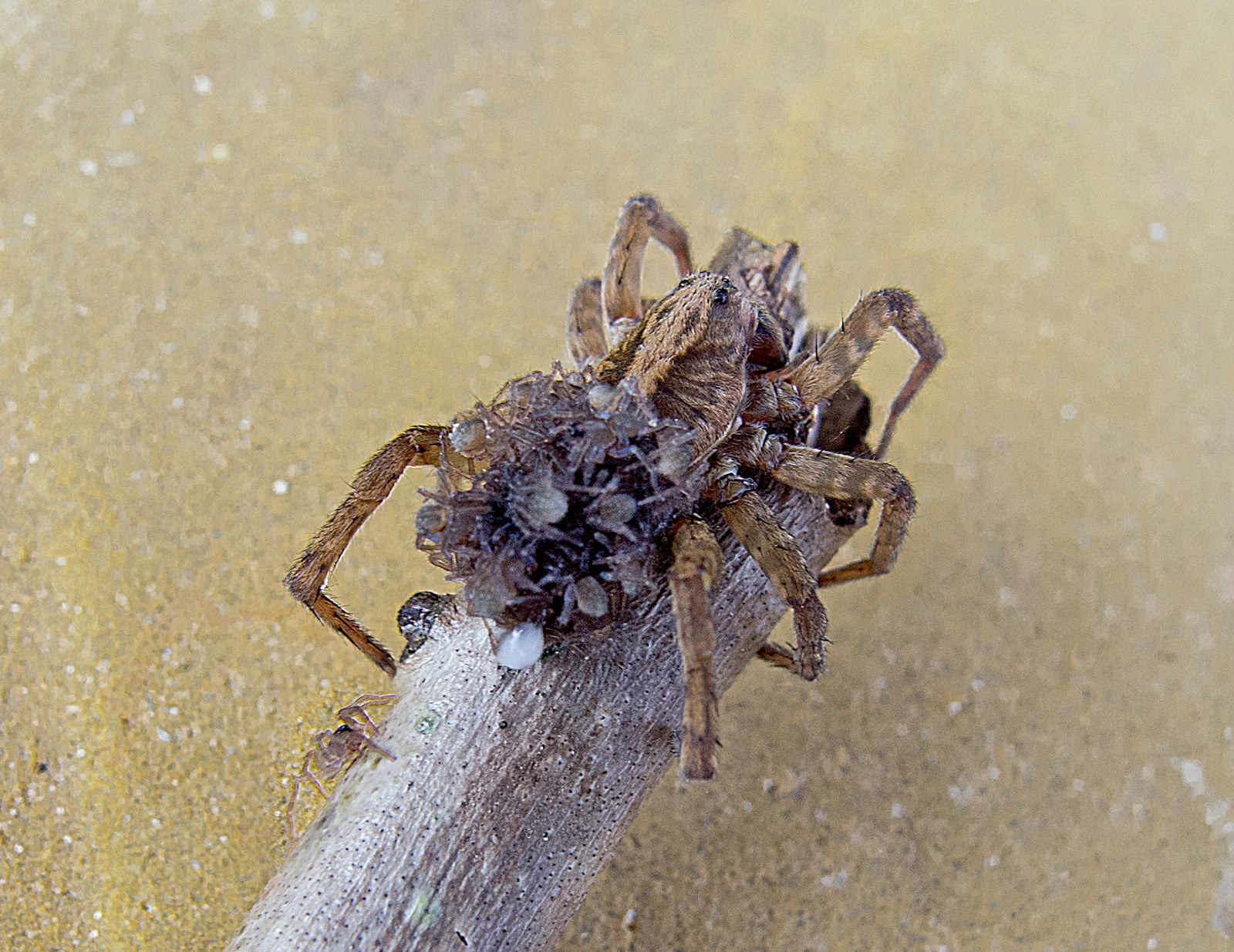 Mama spider has the job of making a cocoon for her eggs to develop safely, though a mother wolf spider can carry up to a hundred babies on her back. Not all species’ females die after egg-laying, as Charlotte famously did; tarantulas, for instance, can live for up to seven years, and mate multiple times, and some kinds of mom spiders hunt for their children and feed them until their first molt, after which they chase them away to start their own lives and families.

All this excursion into the lives and habits of spiders, both scientific and folkloric, is to say: You don’t need to go tracking wildebeest or snow lions in some remote region of the globe in order to  encounter wilderness. All the dramas of life, sex, the hunt, and death are right there: up in that unswept corner of the ceiling. Spiders have lived in human habitats for millennia, from fire-lit huts to royal palaces. We find their webs in sub-basements and at the tops of skyscrapers. They are little bits of the wild that have found comfortable niches in the secret recesses of our human-made spaces, pursuing their own purposes and seemingly doing fine. 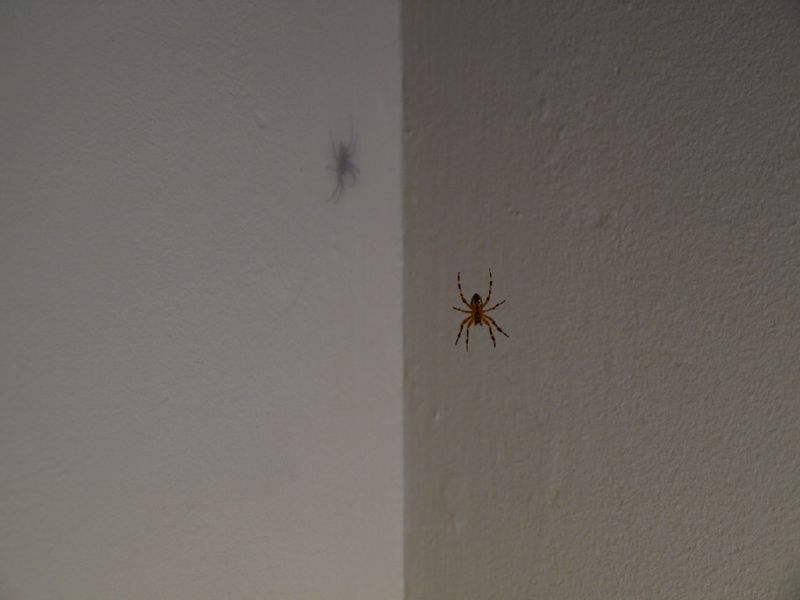 In Spider’s crafty ways we can readily recognize the uncanny presence of another sentient creature. Living her life, quietly and successfully, even uninvited in our human quarters, Spider can be our first encounter with the active intelligence of nature: our personal Gaian ambassador. Greeting her, we welcome the presence of the anima mundi—the soul of the animate earth—and the whole interconnected webwork of life, embodied in one tiny creature. If we can welcome this tiny goddess’s presence in our homes, she just might grant us the blessing of being able to see the entire vivid panoply of biospheric relations as brimming with vitality, intelligence, and even soul.