My painting, As We Take, depicts how the current system of capitalism is inherently unjust as it causes disproportionate environmental impacts on communities and populations resulting from disparities in race and socioeconomic status. The elements of the painting represent the burden of consumerism put on marginalized communities, while wealthier and more privileged populations reap the benefits through profit and consumption. These two communities are represented through the hands painted near the bottom and the top of the painting. The skin color of these hands call to mind the racial disparities brought about from a system built on capitalism. Peter Wenz, a professor of philosophy at the University of Illinois, writes about these burdens through discussing locally undesirable land uses in his article, “Just Garbage: The Problem of Environmental Racism.” His paper touches on how the capitalist market that bases the allocation of goods and services on how wealth is distributed creates a disproportionate burden of locally undesirable land uses on lower income communities.[1] These types of land uses involve factories, landfills, incinerators, smelters, refineries, and chemical plants that create toxic by-products, impacting the health of neighboring residents. 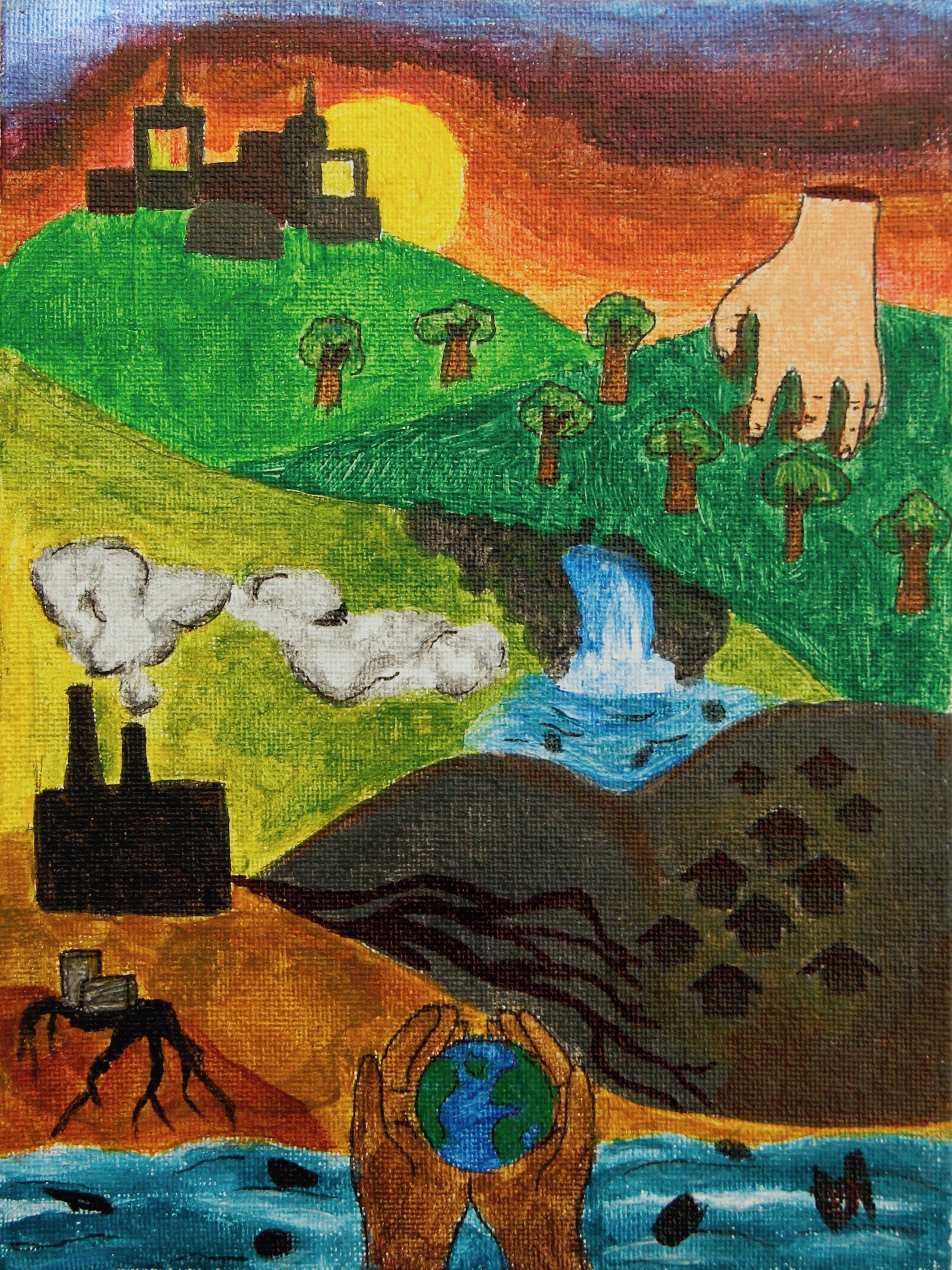 In my painting these polluting industries are represented in the bottom half of the piece through a factory producing air pollution and barrels of oil leaking down towards the ocean. The depicted neighborhoods near these elements look dark and barren. As one’s eyes move up the piece, the painting becomes more colorful with thriving and unpolluted natural features, such as flourishing trees and a waterfall. The differences from the bottom to the top of the piece show that the consumption of natural resources has a significant impact on the less privileged communities, while the wealthier communities thrive economically, which is represented by the bright metropolis on top of a green hill.

Overconsumption due to capitalism has created the demand for these polluting industries that contribute to climate change. Wenz writes that “toxins are released into the environment in greater quantities now than ever before because we now have a consumer-oriented society where the acquisition, use and disposal of individually owned items is greatly desired.”[2] Society deems the consumption of material goods valuable, thus allowing for the toxic waste by-products created along with these goods. The current economic system places these polluting production sites by cheaper land where lower income families live, as there is less of a social wealth loss. Our current societal system values economic gain more than citizens’ health.

My painting illustrates how capitalism provides disproportionate advantages for white individuals of higher socioeconomic status. At the top of the painting the lighter skinned hand is grabbing at the green pasture, while the darker skin hands hold out the Earth in the form of an offering. The more privileged communities of higher economic status that are mainly white are able to directly gain resources from the land, while lower income communities of color are not given access or education on these resources. This disparity is shown with the lighter skinned hand on top taking these natural resources that only they have access to higher up in the painting. Robert Bullard, a professor of sociology and a leading voice in the environmental justice movement, writes about these disproportionate impacts. In “Overcoming Racism in Environmental Decision Making,” Bullard says that under the current norms, “low-income and minority communities continue to bear greater health and environmental burdens, while the more affluent and whites receive the bulk of the benefits.”[3] These industries disproportionately impact lower income communities of color through toxic waste, resource contamination, and land depletion. The consumer demand for new technological goods has led companies to find cheaper labor in poorer communities. The toxic waste is illegally dumped in the sewers and waterways that then poison the surrounding communities.[4] The workers are not earning high enough wages to afford the goods that they produce at the facilities, even though they are the ones most affected by their production.[5] The darker skinned hand at the bottom is offering its own natural resources to show how lower income communities of color have their land contaminated or taken in exchange for income to survive the capitalistic and consumer-oriented society.

If these burdens of capitalism were fairly put on those who receive the most benefits, consumption demand would undoubtedly decrease. Wenz writes that “when people of wealth, who exercise control of manufacturing processes, marketing campaigns, and media coverage, are themselves threatened disproportionately by toxic hazards, the culture will evolve quickly to find the production largely unnecessary.”[6] If polluting facilities were moved to privileged neighborhoods, wealthier people would need to live with the dangers that they are creating through their overconsumption. Consumers are not directly impacted by these dangers that less privileged communities are exposed to, so there is no incentive to reduce consumption in the current system. Since economic power prevents wealthier people from having to consider the health of poorer populations, governmental policies are the only way to limit the burdens.

Unfortunately, affected communities—already burdened with health issues from industrial pollution—are less likely to be protected by enacted policies and governments’ response to climate change.[7] Poor communities of color are hit with what Bullard calls a “double whammy” as they suffer from larger health threats and less governmental protection.[8] But government action can actually create or worsen these environmental inequalities. The stricter environmental regulations have led toxic polluting facilities to move toward these marginalized communities specifically because it is easier to get permits for these less commercial neighborhoods.

With the environmental injustice of human health traded for economic gain represented in my painting, the burden of proof lands on the victims rather than the polluting industry.[9] This unequal enforcement is institutionalized within the current environmental protection system. These marginalized communities need to spend resources on compiling evidence that they are being harmed or disproportionately affected. Instead, governments should mandate large corporations to provide proof that their production does not emit toxic substances before they are given permits. Environmental justice requires that the burden of proof that operations are not disproportionately impacting minorities or lower socioeconomic communities be shifted to the polluting industries.

Climate change and environmental degradation correspond with climate injustice, as it puts poorer populations of color at risk for rising seas, harsher weather, and less access to resources. Even if communities are able to move away from the health threats of polluting facilities, there is still damage continued on the environment. Chemical and industrial plants can buy out residents through secret settlement agreements, to prevent any public scrutiny or disclosure of harm so they can keep producing goods.[10] The capitalist goals of economic growth and consumption will continue to fuel atmospheric pollution and environmental degradation. Marginalized communities are the first to face the harmful impacts of climate change. Even if they are no longer being directly impacted by a nearby facility, sea levels are rising and irregular natural disasters are occurring, while the wealthy are able to escape these impacts. The polluted ocean on the bottom of the painting reminds the audience of these burdens of climate change. My painting illustrates how the disproportionate environmental impacts on marginalized communities will continue to exist in our capitalist system. Economic growth through overconsumption is inherent within capitalism, thus environmental justice cannot be completely accomplished as long as capitalism remains dominant.

Liana Perez, As We Take, 2020, acrylic on canvas board

Liana Perez is a senior at Cornell University, majoring in Environment and Sustainability with a concentration in the Environmental Humanities and a minor in Climate Change. Having grown up in New York City and witnessed major environmental inefficiencies, Liana hopes to work with urban communities to achieve climate justice.