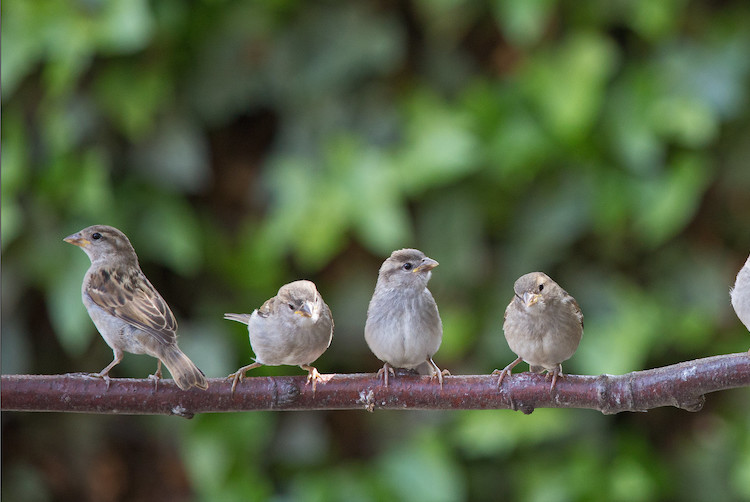 It seems to happen once each century. In 1775, the Redcoats showed up in Boston. The Beatles made a big splash in the former colonies about two hundred years later, in 1964. And in the sweet-spot between those impactful visits, the house sparrows (Passer domestics) arrived.

Difficult as it may be to believe, given current controversies and political grandstanding, for a long time America had a very open-door immigration policy that applied to humans and non-humans alike. For example, in the 1850s, when Brooklyn Institute Director Nicholas Pike purchased eight pairs of house sparrows from England, he didn’t need permission from any agency to import and release the birds. Even so, introducing these Old World sparrows to the New World was not done on a whim. Pike reportedly paid $200 for their passage across the Atlantic. That may not sound like much, but it was the equivalent of $5,000 today. 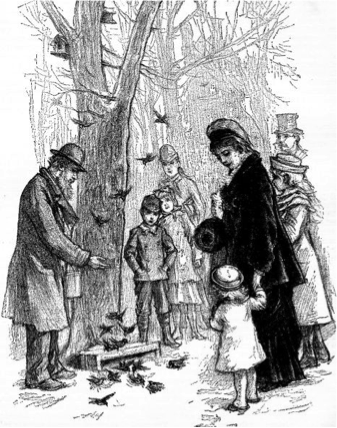 Some sources suggest the birds were imported to control a serious canker-worm (Geometridae) infestation that threatened New York City’s trees. If so, it was a well-meaning but rather misguided notion because house sparrows are granivores (seed-eaters), not insectivores  (although they do feed insects to their nestlings).

Those first settlers were unsuccessful but, undiscouraged, Pike purchased another 25 pairs the following year and released them along the East River. This cohort proved hardier and began to adjust to their new home. Another 100 pairs were ordered and release in 1853. Americans have a history of Anglophilia, and soon New York was all a-twitter about these chatty, cheerfully social birds. 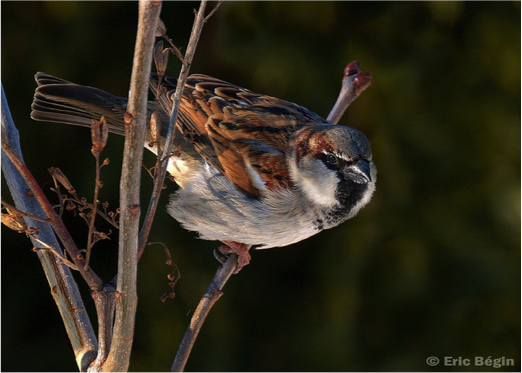 House sparrows aren’t close relatives to native North American sparrows, and it shows—they’re a bit heavier, with a deeper chest, a rounder head, shorter tail, and a less delicate bill. Six inches (15 cm) long from beak to tail-tip, and weighing in at about 1.4 oz (40g), the male house sparrow is dashing but not flashy. Bright hues aren’t his cup of tea; rather, he sports a neutral palette of black, gray, and chestnut, with a touch of white to brighten the ensemble. Females are appropriately tweedy—tawny-brown with darker striping on top, oatmeal-tan or fog-gray below—more Margaret Thatcher than Amy Winehouse.

Nonetheless, house sparrows were a trending novelty that went viral. Entrepreneurs recognized a market opportunity and became breeders. Citizens along the East Coast followed Pike’s lead, and by 1870 this pioneering species had spread south to Texas, north to Montreal, and past the Mississippi River. A West Coast population was established with releases in California and Utah (1871–74). House sparrows expanded their range from less than 1,200 mi2 to over 500,000 mi2 over the next decade, and by the turn of the twentieth century had nearly filled in the space between East and West.

Why have house sparrows thrived while other species—including some native birds—have failed? Here are the keys to making it in America:

Get lucky.  When house sparrows arrived in North America, the stage was set for a successful acclimation. Steam and internal combustion engines were coming on strong but horses and cattle were still a common means of transporting people and products. In addition to grass and hay, working herbivores needed additional calories in the form of corn, barley, oats, wheat, and rice. These grains weren’t always fully digested by livestock, and resilient house sparrows weren’t fussy about where they shopped for groceries. Also, these small birds could easily slip in and out of pens and stables to pinch a bite or three. Enterprising sparrows even hitched rides on newfangled locomotive boxcars filled with grain.

Grow up fast, breed early, breed often.  House sparrows’ eggs hatch after 10-16 days of incubation. Nestlings fledge at 14-15 days old and are independent 7-10 days later. One study suggests they may reach sexual maturity as early as 4 months of age—time to find a mate and get busy! Female house sparrows produce 2-5 clutches of 3-7 chicks per breeding season; that’s an average of 20 chicks per season, per breeding pair. You do the math.

Stand up for yourself and your kin.  House sparrows create informal nesting colonies, are strongly territorial, and will aggressively defend nest sites and feeders. They’ll attack both intruders and potential intruders, and have been known to destroy the eggs and nestlings of competitor species. 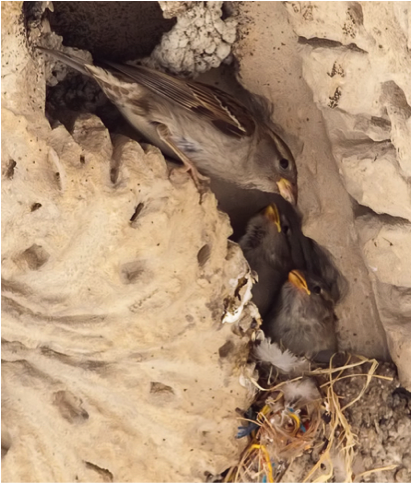 Be smart, adaptable, and adventurous.  Many bird species have strict preferences about where to raise a family. Sparrows, on the other hand, are willing to consider nearly any property on their quest for real estate. Nest boxes and tree cavities, of course, but also signs, architectural features, drain pipes, and dryer vents. They’ve even learned how to trip automated door sensors to access food, gain shelter from the elements, and find protection from predators.

Have friends in high places. If you’re a wild thing, having people on your side is the equivalent of a royal patronage. In the mid-nineteenth century, helpful humans trapped house sparrows in one place and released them into new territory cleared of predators and outfitted with nesting boxes. That, my friends, is what’s called “tipping the scale.”

But you know how this story goes. It plays out over and over in print, broadcast, and social media. First they love you, and then they love to hate you. Americans adore a winner but, as any reality TV star can attest, get too successful and fans will take equal pleasure in watching your fall from grace.

Even as the house sparrow fad continued to grow, some conservation-minded folk began to notice the immigrants were not assimilating as hoped, ignoring local customs and expectations. Before long, civic leaders deemed house sparrow nests “unsightly” and their droppings were blamed for “besmirched” buildings and sidewalks. House sparrows were tagged as thieves who pilfered valuable grain from honest, hard-working farmers. Worse yet, the foreigners were considered inhospitable to the native avian community. The nerve of those ungrateful little upstarts!!

Guides for trapping, shooting, and poisoning the birds were distributed free of charge. By 1883, state legislators in Indiana declared the house sparrow an outlaw who should be killed on sight. Five years later, Illinois and Michigan established a bounty on “English” sparrows, and children scrambled to exchange dead birds for cash to buy candy.

Never mind that human development had at least as great an impact on native bird species as the house sparrow we forcibly relocated to a new landscape. Forget that the effects of trapping and poisoning are rarely limited to the intended target species. Dismiss the lack of conservation legislation, which allowed “market hunters” to bring dozens of native wild bird populations to the brink of extinction. The public was frightened and angry about the changes in their own communities wrought by industrialization and human migration. Scapegoats were needed to pay the piper for society’s sins and transgressions. 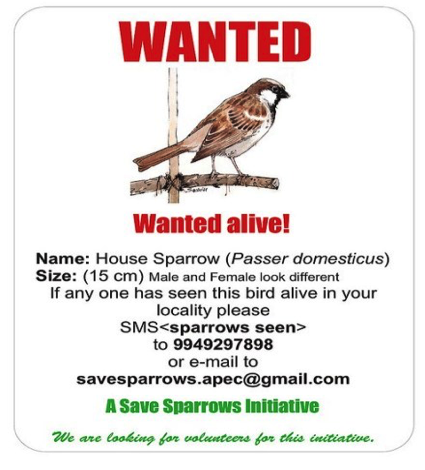 Following that tried and true media script, though, the house sparrow is experiencing a rebound in popularity, at least in its original homeland. Precipitous population declines in England have caused the species to be red-listed. The problem appears to be a lack of available food resources for house sparrow youngsters—nestlings need the higher level of protein that insects provide. Over the past ten to fifteen years, “Save Sparrows” campaigns have encouraged British homeowners to decrease or eliminate insecticide use, choose insect-attracting plants, and intentionally increase nesting sites.

I’ve yet to see anything in the scientific literature proposing North America as a possible source of imported house sparrows to repopulate their original range, but there’s a nice full-circle appeal to that storyline, don’t you think? Maybe, just maybe, you can go home again.

Image credits, as they appear from top to bottom: