Prior to Gods, Wasps and Stranglers: The Secret History and Redemptive Future of Fig Trees, nothing I had read about trees informed me of the fig tree’s importance. Perhaps this just goes to show how inadequately and haphazardly we humans value the non-human beings that sustain us. Author and rainforest scientist Mike Shanahan tells us that “over millions of years these [fig] trees have shaped our world, influenced our evolution, nourished our bodies and fed our imaginations”—just a start, really, for he also writes that fig trees could in the foreseeable future “help us restore ravaged rainforests, stem the loss of wild species and even limit climate change.” Obviously, this is a tree we should know a great deal about, and yet I venture to guess that, while we can recall tales of apple trees, oaks, and pines, the dismissive expression “I don’t give a fig” may characterize for many of us our level of familiarity with fig trees.

That won’t be true after reading Shanahan’s book. And maybe the zeitgeist is already at work, bringing fig trees into general consciousness. One of Shanahan’s claims is that fig trees have the power to build bridges “between scientific and faith-based world views.” Shortly after finishing Gods, Wasps and Stranglers, I attended a reading by Ross Gay, a poet whose Catalog of Unabashed Gratitude (University of Pittsburgh Press, 2015) was the winner of the National Book Critics Circle Award and other prestigious prizes. Gay’s Catalog is a hymn to life in all its organic joy, and that is surely a faith-based worldview. Its first poem is entitled “to the fig tree on 9th and Christian” and is the symphonic dance of a group of strangers brought together by sharing the sweet fruits of a fig tree growing, incongruously, on a Philadelphia street. Here, I thought, is support for what Shanahan is saying: fig trees building a bridge between science and poetry, the poet seeing the tree functioning to unite people who share its fruits, “strangers maybe / never again.”

Shanahan makes his home in Folkestone, England. He has traveled to Borneo, Sri Lanka, and Papua New Guinea to study fig trees and the myriad birds and mammals that contribute to their life cycle, and he adds to his own exciting experiences the adventures of other naturalists past and present. With journalistic flair, he links Alfred Russel Wallace’s development of the theory of evolution to a strangler fig, relates how the British botanist E.J.H. Corner put monkeys to work gathering unripe figs, and connects Nobel Peace Prize winner Wangari Maathai’s tree-planting, as well as the capture of the Mau Mau leader Dedan Kimathi, to fig trees. His gathering of fig tree species includes the spectacular and exotic strangler figs, as well as the glossy-leaved Ficus benjamina, one of the most common house plants. For each he has a story. I think I know what talking to Shanahan is like. You mention something, anything—a favorite dessert, your grandmother’s remedy for headaches—and Shanahan says, “That reminds me of a fig tree . . .” 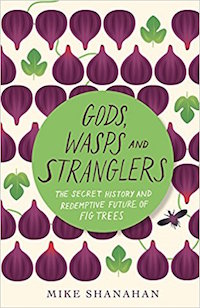 Readers will be fascinated by the story of fig reproduction and the mystery of a plant that has no visible flowers, an aspect that had naturalists fooled for centuries. It is an amazing tale, as is the story of the rhinoceros hornbill’s nesting habits—a lifestyle so incredible that it would be a spoiler to tell it here. But while Shanahan uses hornbills to get the reader hooked, behind these stories is a desire to notify the world of the threat to hornbills from logging in Borneo’s forests. He expresses great admiration for the efforts of rainforest researcher Tim Laman to save the birds by publicizing them through photos and stories rather than by writing “dry academic papers in science journals few people read.” This approach obviously influences Shanahan also.

Shanahan is willing to condense and dramatize his collection of scientific material, but he is equally anxious to convey the fig tree’s century-old impact on culture, beginning with its importance to the survival of the first humans. He devotes several chapters to the fig tree in Egyptian and Greek mythology and gives examples of the fig tree’s prominence in every major religion, even suggesting that a mistranslation of ancient scripture occurred: that in all likelihood the snake in Genesis tempted using a fig, not an apple. Shanahan recites the linkage of fig trees to other creation stories, including the ancient Vedic culture that gave rise to Hinduism, and perhaps most importantly to Buddhism, for it was under the strangler fig we know as Ficus religiosa that Siddhartha Gautama attained enlightenment and became the Buddha.

The author is especially concerned about the loss of species diversity that earth is experiencing. This loss affects the fig tree, which requires a very tiny wasp to pollinate its hidden flowers and a collection of habitat-specific birds and mammals to spread its seeds. Not surprisingly, logging, hunting, and the spread of human habitat mean that what figs need to reproduce is in increasingly short supply. The consequence is that more and more, fig trees produce hollow balls rather than fruits. This loss in turn leads to a diminishment of the at least 1,274 species of birds and mammals that figs nourish—a dismal statistic to ponder. In the case of figs, however, there may be a silver lining, as figs have an almost unique ability to reclaim and restart depauperate landscapes. The jury is out on whether fig tree reproduction can continue in a warming climate, but even there, Shanahan suggests, lies hope because figs provide pollinating wasps with a relatively cool refuge.

Gods, Wasps and Stranglers is not a big book, and Mike Shanahan has a great deal of territory to cover. For this reason it serves well as a general introduction to human/plant relationships, while glossing over exceptions to the rule that would slow down the text. It is an ideal book for adults with a limited science background and for secondary school students, one that is guaranteed to introduce them to ecology. From its beginning—which features the author clinging to a slippery perch high above a rainforest, only inches from a deadly snake—the writing is exciting. Shanahan’s description of the emergence of the less-than-two-millimeter fig-wasp on a mission to deposit eggs reads like a Superwoman comic or a Star Wars script:

The wasp does not have time on her side. With every minute that passes her energy stores deplete and can never rise again. . . . Our wasp escapes only when a gust of wind blows her high into the sky. She has eluded the predators. Now she must face the elements. . . . At last she reaches the fig’s hollow centre. She can complete her mission.

But it isn’t over yet: “Figs are arenas of deadly gladiatorial battles and hasty incestuous sex . . . in just one day as many as a million insects can die violent deaths inside the figs of a single tree . . .” What high schooler wouldn’t read on?

This is a book to reverse our increasing distance from life that is other than human. Readers are bound to feel connected to a bridge builder that has played such an important role in human development. In the words of poet Ross Gay, “there is a way / the fig tree grows / in groves it wants, / it seems, to hold us.”

Joan Gibb Engel writes about how we children of nature can preserve the natural world in all of its splendor for the children of tomorrow. To this end, she has contributed personal essays and poetry to a variety of publications and has edited several works that deal with environmental ethics