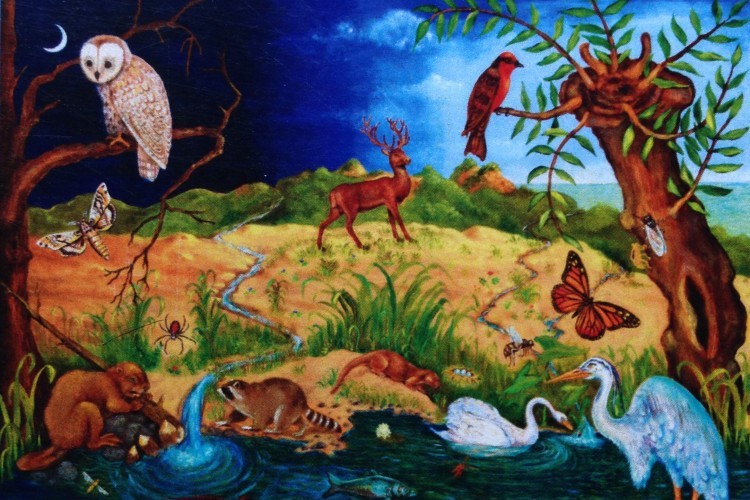 As writers we often don’t choose our subjects; rather, our subjects speak to us. Over the last decade, animals have preoccupied my imagination. While assembling my most recent book of poetry, Bestiary (Red Hen Press, 2009), I realized that animals, almost by accident, inhabited many pages of the volume. I was fascinated by the intersection between animal and human worlds and often explored the boundaries where those worlds crossed.

Animals continue to intrigue as I write poems for my next book. Some of my new work explores the relationship between mice and murderers, wolf spiders and women’s skeins. When I was invited to submit poetry to City Creatures, I spent an afternoon at the North Park Nature Center where I began writing “Visitations,” a poem inspired by the connection between the deer and the patients who once were housed in the sanitarium on the property.

Gavin Van Horn selected a sampling of poems from my book, Bestiary: “Monarch,” “Trapeze,” “The Flycatcher’s Fall,” “Pond in Winter,” and “Under the Dome.” He writes: “I pick these because of the bodily intimacies of mothering; the wonderful metaphors of our child-animals, within and without; and their settings, which have the urban (or at least imagined urban) as their background. I think this set of poems also provides a nice flow, beginning with the monarch in the belly and concluding with a celebration of butterflies, among other creatures, who share the same space, under the belly/dome of sky.”

I invited my friend, the photographer Jessica Tampas, to share some of her stunning photographs to accompany this work.

From milkweed to lupine a woman shadows
a monarch. Slowly makes her way, conveys

her weight with care. Inside the womb her son
flutters, then butterfly-kicks against walls.

The woman tracks a trail of burnished wings,
migrating into the heart-notch of forest,

Into darker woods she transports a monarch
ruling, even now, unnamed territory.

Sky-bound in someone’s yard,
bluebells poke out of dirt.

From back-alley I swing
open our gate to garden.

Beneath the skin your fist
punches: harbinger bud.

A shoot sprouts after snow—
you practice somersaults—

How much space will you need
to grow? A galaxy

of cells, then the heartbeat.
You nose-dive down. A dove

hoo, hoo, hooing. Above
lodestar, a slip of moon.

Near the stones marking the Sweat Lodge,
a newborn flycatcher has tumbled
from the nest. “Careful: don’t touch it,”
I warn my inquisitive daughter.
“The mother might reject her young.”

Perching the flycatcher on bark,
my husband climbs a ladder, slips
the fledgling in a crowded nest.
He teeters, “Not much room up here,”
as beaks open, expecting worms.

Pregnant again, I’m craving something
salty. Our six-month fetus raps
my ribs, demanding food. “The baby
wants her mommy,” tugs our daughter
on my sleeve, looking up the tree.

How will this flycatcher sustain
her brood? Will the fallen one starve?
We hear a whistled whit in air
while wing-flutter overhead darkens
the sun. All the small birds respond.

of pond where the Great Blue Heron once dipped
its beak, where the Wood frogs jumped from the hands

of the children, where, in the dead of summer,
a Northern Water snake coiled on the bank,

alive in the sunlight, but now lies buried
beneath the glass. Where do the fish escape,

their evanescent graves. Above the house,
a secret of smoke. The wood burns inside

the grate as it once smoldered under leaves.
From the winter forest a solitary

light rises through a window in thick dusk
as if surfacing, again, out of water.

At times they will fly under. The dome
contains jungles. Invent a sky under the dome.

Southern Belle, a splash of black, dusted with gold,
dissembles, assembling, acts shy under the dome.

Like confetti—a wedding—bits of Rice
Paper: sheer mimicry under the dome.

Magnificent Owl, in air, a pansy,
it feeds, wings up, eye to eye, under the dome.

Name them: Monarch, then Queen, last Viceroy.
What will scientists deify under the dome?

Basking against a leaf: a Banded Orange,
displayed like a bowtie under the dome.

A living museum. Exist to be observed:
never migrate, but live, then die, under the dome.

Lips, lashes, eyes. From the outside in,
do beings magnify under the dome?

Lepidoptera. From the Greek: scale-wing.
Chrysalis. Stay, butterfly, under the dome.

Paschen has served as the executive director of the Poetry Society of America. She co-founded the Poetry In Motion program, which posts poems in subways and buses. She has been the Frances Allen Fellow of the Newberry Library as well as poet laureate of Three Oaks, Michigan. Paschen lives with her family in Chicago.