How do we create communities to which all of us can belong?

These days the experience of alienation is common. Most of us no longer walk upon the land our ancestors once did nor drink from their streams. Many of us do not know the people we live near, let alone the lands and waters we live upon. Yet, we long to belong. We seek home everywhere we go. Underneath this yearning lies a sense that we exist to be part of something greater than ourselves. As members of global societies that separate us by nationality, region, gender, race, economics, education, religion, politics, and position, how do we connect to the lands and waters, to the living community, to each other, and to ourselves? Join us as we explore this question at the heart of our interconnectedness.

When I try to explain to people the essence of my relationship to place, I usually call myself a “serial rooter.” I’ve lived in many places during my life, but I’ve rooted deeply in almost all of them. And each of the places I’ve lived has, I’ve realised with the benefit of hindsight and quite a bit of analysis, taught me a lesson I’ve really needed to learn at the time, and a lesson that enabled me to grow into the work I’m doing now. Because, at the very deepest level, place makes us who we are. We think that we imagine the land, but perhaps the land imagines us, and in its imaginings, it shapes us. The exterior landscape interacts with our interior landscape, and in the resulting entanglements, we become something more than we otherwise could ever hope to be.

It’s perhaps not surprising that, as a psychologist and mythologist, it’s acts of imagination, of coming to know the unique stories and archetypal energies which are present there, that lead me to feel strongly immersed in a place—and which also happen to teach me the greatest lessons. For many of us today, though, our relationship with place has become demythologised—a fact which is both an explanation for and a consequence of our sense of alienation from the world around us. Remythologising our places, then, is not just an interesting intellectual exercise, but an act of radical belonging. Like any other species on this planet, we badly need to be grounded; we need to find our anchor in place, wherever we might happen to live. Stories can be our anchors.

There are two key elements to this work of re-storying the Earth: first, coming to know the stories which are already existent in the land, and second, weaving our own stories into the fabric of the land, by engaging with it in ongoing acts of co-creation.

When the places and features of the landscape are tied to its old stories, knowing and remembering those stories as we walk through the land can help to weave us into its history, connecting us to ancestral voices and raising our awareness of the continuity of human relationship with the place—so helping us to establish meaningful and enduring bonds with the land in which we live.

It’s important to know those old stories—but it’s not enough. Because the stories which are located in a place change over time—it’s a body of lore which is constantly reconstructing itself, just as the land around us is in a constant process of becoming. If we as humans have a calling to become something, why wouldn’t the places in which we live have their calling too? And whenever we live in a place, we become part of its ongoing journey of transformation, just as it becomes part of ours. We bring new possibilities to it, forging unique relationships with it and with the plant and animal life around us. And with the archetypal energies—gods, elementals, spirits, if you like—which our ancient cosmologies tell us inhabit it. And so, although familiarity with the old stories of a place is an important part of coming to understand how it came to be the way it is, and the history of human life in it, its stories don’t end at any point in the past, or with any one set of people who inhabited that place. Places, and their stories, are in a continuous process of becoming. And so, if we are truly enmeshed within a place, we’ll contribute to that process—to keeping the Dreaming of the land alive.

From 2014, I lived for three years in a tiny old riverside cottage in the hills of Donegal, in the far north-west of Ireland. We had moved there from the Isle of Lewis in the Outer Hebrides, where I had immersed myself in a land which was steeped in the mythology of the Cailleach: the wild and powerful archetypal Old Woman of Gaelic mythology who created and shaped the land. Just as they are in Ireland, mountains and other places all around Scotland are named after her; she is immanent in the land itself. Directly in front of our island home was a long, low mountain which had the shape of a reclining woman; as I learned more and more about the Cailleach’s mythology and her association with high and rocky places, I began to imagine that she was present in the mountain. The Cailleach-mountain dominated our village and the headland, and as I walked the land each day, I spoke to her as if she was an old friend.

Although much of Ireland is also steeped in the mythology of the Cailleach, in the particular part of Donegal where we lived, I could find no local stories about her, and no specific landmarks named after her. I felt curiously lonely and utterly cast adrift. Where was the Cailleach in this place? How could I possibly belong to a place where there was no Cailleach, whose stories had claimed me so powerfully and dominated my imagination for so many years?

On the hill behind our cottage there was a wood, and in the wood, there was a heronry. Sometimes in the early morning, as I walked with the dogs along the lane which led up to the high bog, I’d see a Heron standing on a stone in the middle of the fast-flowing river; the still point in the turbulent birth of every new day. 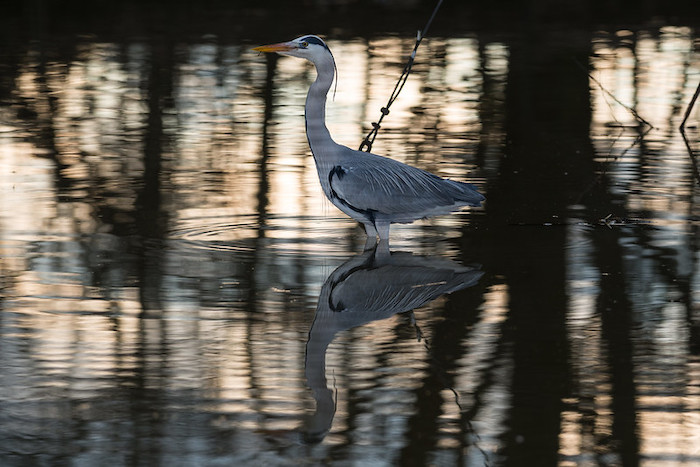 In the Irish language, the word for the grey heron is corr; it also happens to be the word for crane. This is because, just around the time that the Eurasian crane became extinct in Ireland, the similar-looking grey heron arrived to fill its ecological niche. Heron and crane, then, are interchangeable in Irish mythology, and in those old stories, crane is a powerful and a liminal bird. She haunts the thresholds where water, land and air intermingle; she guards the treasures of the Otherworld and is a guide to those who wish to travel there.

Now, surrounded as I seemed to be by herons, I read as much about them and their crane counterparts as I could find. In many of the old stories they are connected to old women. Thinking about this as I walked along the lane, one winter morning at dawn, I stood and watched as a Heron flew up from the riverbank, shrieking. There was something oddly hag-like about her call, and all of a sudden, a character popped into my head: Old Crane Woman came to me, part woman, part bird. By the time I arrived home, she had taken possession of me. Springing directly from this place I lived in, rising fully formed out of my river, I had found the archetypal Old Woman in another form. I wrote extensively about Old Crane Woman during those years; she became as real to me as the Cailleach had been on Lewis—a friend and confidant in exactly the same way.

The figure of Old Crane Woman was new in the ever-transforming mythology of that particular corner of Donegal, but she emerged in the only way that is meaningful: not just out of my head, but directly out of the place itself, and the creatures that inhabit it. Old Crane Woman occupies the space somewhere between the grey heron, the river, and my own imagination. She’s an act of co-creation between me and the land. This is how the land draws us into relationship with it: by engaging our imagination. This is how we can build belonging, and this is how we re-enchant the Earth.

Falling into the land’s dreaming: that’s what I call this process of becoming so attuned to the archetypal and mythic elements of a landscape that you can engage with it in these acts of co-creation. Our ancient ancestral mythology in Britain and Ireland tells us how it is to walk through life with one foot in this beautiful, animate Earth, and the other foot in the Otherworld. On the one hand, fully grounded, acknowledging and conversing with all the other-than-humans who share this world with us. Offering a praise poem to a tree, telling a story to a stone, sharing a joke with a crow. On the other hand, courting the ancient soul of the world as it uniquely expresses itself in these wild and windswept islands on the far western edge of Europe. Listening for the Voices of the Wells, the whispers of the oracles, the voices of the ancestors. Walking in awareness of the mythopoetic undercurrents of our lives—the rich river of story and archetype which flows beneath the surface of the everyday.

This is the dreaming of our land. We’ve forgotten much of the old dreaming; it’s time to scrabble amidst the rubble, and see what stories we can unearth. But even more important is the need to participate in the process of its never-ending becoming. If the stories of a place are alive and transforming, then so is the soul of the world as it expresses itself in that place. And so are we, held within it. Because it’s acts of imagining, ultimately, which keep the world alive and thriving. The land is waiting for those who know how to watch and listen; for those who are open and know how to dream. It’s time to dream along with it.

Dr. Sharon Blackie is an award-winning writer and internationally recognised teacher whose work sits at the interface of psychology, mythology, and ecology. Her highly acclaimed books, courses, lectures and workshops are focused on the development of the mythic imagination, and on the relevance of our native myths, fairy tales, and folk traditions to the personal, social, and environmental problems we face today.

How do we create communities to which all of us can belong?