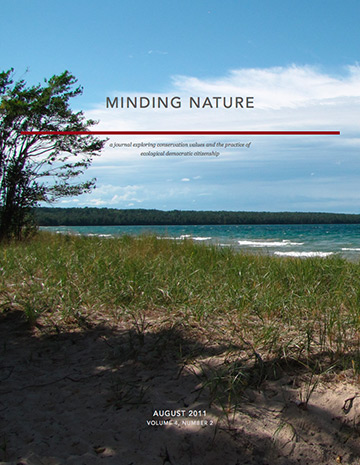 The tenth anniversary of the terrorist attacks of September 11, 2001, is just around the corner. The last decade has been one of war and economic crisis. It has also been one of ideological polarization and political paralysis.  A historically significant achievement of governance—health care reform intended to increase access and social justice—has not been cause for collective celebration and affirmation. A globally significant challenge—slowing and reversing the deadly process of climate change—has not united us in common effort and common purpose.

Coming home to Wisconsin on a recent trip, I found myself lingering along the south shore of Lake Superior in Michigan’s Upper Peninsula. Lingering, because any time I am in proximity to the big water of Superior, I find it hard to break away from its shore. In midsummer its brisk air, freshwater surf, chill water, and expansive horizons combine to make it one of the most invigorating and restorative places on Earth. Coming to the lake, one’s body sighs, and calms, and breathes. One’s view is sprayed and washed clear.

The Dream of This Place with Us: Science, Religion, and the Environmental Crisis

When Richard Wilbur wrote “Advice to the Prophet” at the height of the Cold War, there was a very real possibility that human life and consciousness would cease to exist on Earth after the United States and the Soviet Union unleashed the destructive energy in their nuclear arsenals.  According to Wilbur, the prophet who could prevent this tragedy would ar­rive on the “streets of our cities/ Mad-eyed from stat­ing” the “obvious” scientific truths about the horrors of nuclear war. One piece of advice Wilbur gives his prophet is to “Spare us all word of the weapons, their force and range” because we are “Unable to fear what is too strange.”

God or Nature: Desire and the Quest for Unity

It is high summer here in way-upstate New York—twenty miles from the Canadian border—where I work and live. It is that brief time of year when the sun seems to lounge its way across the sky, and when its work in June and July now brings warmth to even our most shaded nooks.  With the first frost just over the autumn horizon we dare to com­plain of the heat, of the mountain of produce need­ing canning, and of those club-sized zucchinis hiding under green leaves that seem too big for our northern latitude.

Does the idea of “nature” provide any kind of ethical touchstone to guide and to limit human impacts on ecosystems or the biochemical basis of life?  And does the idea of “human nature” similarly provide any kind of moral structure to govern our use of biotechnological means to alter human beings?  Many would say no to both questions too quickly, just as many others would too quickly say yes. I believe that we must take a more complex and nuanced position on these fundamental questions.

Re-enchanting Liberalism: On the Prospects of Civil Religion

It is time to turn the page and open a new chapter in our collective autobiography—our story about the modernization, materialization, and secularization of the good human life out of which Enlightenment culture and political liberalism were born. We must rethink the relationship between religion and political power and come to see enchantment (imagination and wonder) and enlightenment (reason and control) not as antithetical but as complementary and mutually essential for a new ecological worldview.