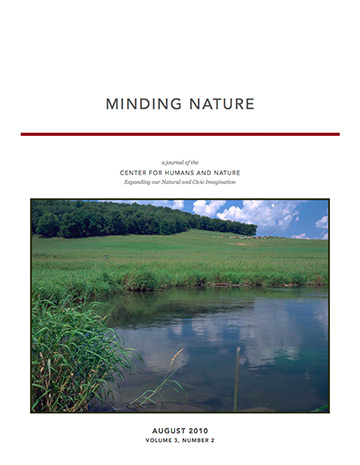 Crossing the Rubicon, or Conserving Its Bounty?

The ecological crisis of our time calls for three great transformations in our worldview and in the relationship between humans and nature. The first of these is a transformation in our frameworks of thought (habits of mind). The second is a reorientation in the way we live, feel, and desire, individually and collectively (habits of the heart). The third, melding mind and heart, is a renewal and restructuring of our moral imagination (habits of conscience).

A World Made of Stories

Gary Snyder had a terse response to the person who asked him what to do to be a good environmentalist: “Stay put.” Of course, this creed is harder to keep than ever for many people, even the bioregionally inclined. I think about the impacts of mobility, both forced and chosen, because I think often about the importance of place: how our values, our affinities, and our loyalties are interwoven with specific landscapes. Getting my bearings is on my mind.

The Principles of Plenitude

Global capitalism shattered in 2008. The financial system came frighteningly close to a total collapse and was saved only by government guarantees and massive injections of cash. An astounding $50 trillion of wealth was erased globally. Economic pain drove people into the streets around the world, from Iceland to Greece, Egypt to China.

An Ethic of Compassionate Retreat

We need a fundamental shift in perspective within water management. To attain such a goal, we must reconsider how efforts in modern water management have, in general, focused on scientific and technological advances and assigned a declining importance to cosmology, religion, and ethics, areas formerly used to provide a context for the ends of human knowledge and action.

How can we make meaningful connections among a seemingly distant past, a troubled present, and an uncertain future? That question was on my mind earlier this week when I found myself in the library at the Department of Forest and Wildlife Ecology at the University of Wisconsin in Madison. At the top of one bookshelf was a box labeled “North American Wildlife Conference Transactions, 1937–1972.” I did not have time to review all the volumes, and their contents are not yet available via the Internet. (They should be.) But by chance I did pull out the Transactions of the 1963 conference.

Conservation and the Catholic Imagination

In our present social arena, religion and science are too often pitted against one another, like cocks spurred to fight. As citizens, we lose sight of the common natural stage we share of awe, wonder, inquiry, imagination, concern, and service. Both sides fail to tap into the energies stored in the surrounding crowds. All that results are brief bursts of applause that fade quickly away. If we want to make lasting changes in ethics and conservation to preserve the planet’s abundance and livability, we need to release the cocks and bust out of the pit. We may have to lure the cocks out by learning more about them, calling them by name, and singing their songs.

Environmentalists in both the theoretical and the practical community have begun to ask fundamental questions about the ongoing failure to stop ever-worsening environmental degradation and destruction. Some turn to critiques of modernity, questioning its underlying assumptions and values. Others find themselves searching outside the familiar top-down approach—reasoning from universal principles to specific practices—to embrace a local, place-based approach. Of course, ethical principles and placed-based ethics need not be mutually exclusive. In fact, looked at with insight and creativity, these two notions can and should be woven together.

Interpreting the Social Meaning of Biotechnology

The biotechnological revolution involves the extension of human power into life—living nature at the molecular level. As its concepts and styles of thought colonize professional, therapeutic, and counseling discourse, and as it is absorbed into popular culture, biotechnology begins to shape the experience of all of us. This triggers a quest for new symbolic forms with which to make sense of—to civilize—this new human power.

The Moral Obligations of Scientists

To advocate, or not to advocate? That question is one of the most basic ethical dilemmas facing environmental scientists today, and the answer can embody a scientist’s relationship with society and nature. After nearly a century of consideration, the issue of whether scientists should disseminate and explain their research, and aim to influence public policy, still fuels heated dispute. The debate in general seems at a permanent impasse. The various arguments for and against advocacy span dozens of scholarly papers. Many of those involved speak past one another, portraying recycled assertions as novel logic, often without acknowledging equally familiar counterarguments.