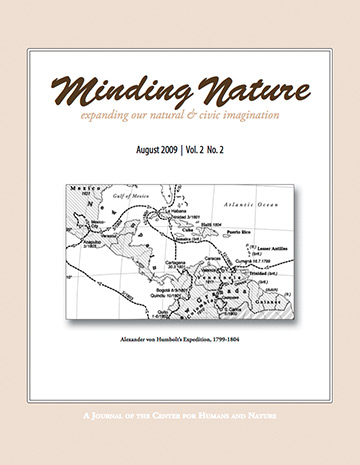 In 1958, just five years after Watson and Crick revealed the molecular structure of DNA, the philosopher Hannah Arendt warned presciently of the growing alienation that science was causing between humankind and the natural world. This warning came in her book The Human Condition at a time when the “biological revolution” was still nascent, and well before the dawn of contemporary genetic engineering and biotechnology.

Until 1845, Humboldt was known in the United States mostly as an explorer and recorder of the exotic American tropics and one of Europe’s leading scientists. It had been nearly twenty years since a major new work by Humboldt had appeared in English. Then he began to publish Kosmos, and everything changed. A raft of book reviews alerted the intelligentsia that something new was afoot.

To Hold: Sustainability of the Cast

A whisper and snap as the line slices and whips the air. The hush, as the dry fly gently lays upon the water, attempting to lure a fish to the surface. A fish. Pure anticipation sublimates the work-a-day rhythm of casting and stripping. The glorious jolt of a strike is a sweet interruption. Casts are not discreet acts but transform into a lineage, priesthood, of a single metaphysical cast, transcendent of space and time. Before the Seventh Day, the Anglers song began in a whisper, crescended in a snap and tapered to the dust of a kiss in a perfectly presented fly.

Revisiting the "River of the Mother of God": Aldo Leopold's Symbol of Global Wilderness

The River of the Mother of God, or Rio Madre de Dios in Spanish, extends from the base of the Andes Mountains through the Amazonian lowlands of southeastern Peru and northern Bolivia where it meets the Madeira River. This essay provides an update on the area as seen through the lens of geographic research, since Aldo Leopold wrote his short essay in 1924 on the river as a symbol of shrinking global wilderness.

The significance of water for life and health is fundamental and can scarcely be overstated, and hence the pertinence of ethics to water utilization and management is clear in a general sense. It is important for everyone involved in water resource management and in public health to have a well-reasoned understanding of the moral values and obligations that correspond to that significance.

The language of revolution should be used as a last resort and against odds that can be beaten only with radical thought and action. It requires justification or, at the very least, explanation. The reader should understand that I am not prone to tirades or behaviors that could be described as radical. I have never participated in a public protest, and refuse to sign most petitions.

Wes Jackson—sitting there four rows back— has said to Courtney White—sitting over there—that “We live in the most important moment in history.” I will leave it to Wes and Courtney later on in the day to explain that comment in greater detail. But it is in this spirit that I am going to open up this morning’s discussion by placing Aldo Leopold’s legacy in the large context of conservation history. And I’m going to start actually with an allusion to a place where my friend Peter Brown (on this side of the room!) has been working with his colleagues at McGill University in Montreal: the Cree village of Wemindji, along the east shore of Hudson Bay in Quebec.

This session is entitled, “Looking Forward: Leopold for the Twenty-First Century. What Would He Say to His Hundredth Anniversary Class Graduating This Year?” I’m going to take a slightly different approach to the question posed to our panel. I really don’t know what Aldo Leopold would say to the class of 2009. In good philosophical fashion I will dodge the scholarly question and instead address myself to what I think he should say, and probably would if he were looking at the human prospect through 2009 eyes.

It is not surprising that when contemporary bioethics began to take form in the 1960s and 1970s questions posed by infectious disease were all but absent. This lacuna reflected the dominant thinking in medicine and even in public health. What little there was of even the first glimpses of an ethics of public health focused on the issues posed by concerns about chronic disease and “life style.”

Putting Nature Back Together Again

Headlines on the front page of a Wisconsin newspaper this week stated “Can nature be rebuilt?” It went on to say, once an area is no longer a pristine ecosystem, can you really put nature back together again? As I read this comment I was reminded of my brother, Carl Leopold, who was planning to restore a tropical rainforest in Costa Rica.